The principal of a high school south of Montreal says she will start fining students for vaping or smoking on the property, after the school’s own efforts to prevent them from doing so failed.

In a letter sent to parents Wednesday, Violaine Fortin, the principal of École secondaire Ozias-Leduc in Mont Saint-Hilaire, said a government inspector would be enforcing the provincial law that bars people from smoking or vaping on public property.

Fortin said employees at other schools have received training and accreditation from the Health Ministry to be able to hand out fines.

The money collected by the fines would go to the government and not the school, Fortin specified in the letter.

“We feel the inspector is necessary since all the prevention and awareness campaigns carried out this year have unfortunately not succeeded,” Fortin wrote.

“Our goal is to keep our students from smoking or vaping at school because it’s bad for their health, on top of being against the law.”

Though Fortin didn’t say how much students could be fined, according to Quebec’s website, fines for smoking in a prohibited place increased in 2015 as part of a number of amendments to the Tobacco Control Act.

Nicolas Gibault’s son is a student at Ozias-Leduc. Gibault wrote an email to the school after he received the letter, saying he disagreed with the measure the school is taking.

“If the kids don’t work or have any money, it’s the parents who have to pay because the school is not able to adjust to have a smoking section or something like that outside the school,” he said.

Parent Nicolas Gibault sent an email to the school, saying he disagreed with its decision to issue fines. (CBC)

Gibault says he is a smoker and believes fining students won’t discourage them from doing it.

Théo Bouthillette-Desjardins, 13, was vaping on a street across from the school Thursday afternoon.

“The students like vaping because it’s just fun,” he said. “We won’t stop vaping or smoking because we have a new fine.”

Bouthillette-Desjardins said his parents would probably have to pay the fine for him, but that he would have to do chores at home to make up for it.

Lucas Dubé Rémy, 16, says he vapes and smokes, too, but that he understands the school’s decision to enforce the law.

“It’s logic because there are people that don’t smoke,” Dubé Rémy said. “When I’m next to someone who doesn’t smoke, I’m not, like, blowing the smoke directly at this person.”

He said it’s a lot of money, but that it makes sense to make the area around the school more liveable. 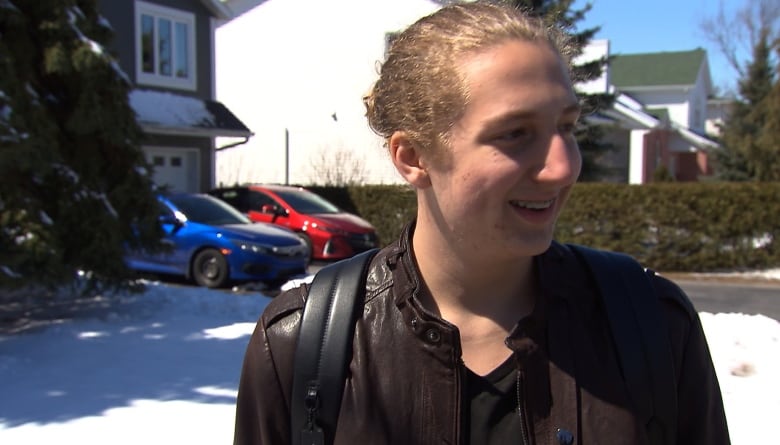 Renaud Carpentier is a student at Ozias-Leduc, who says he believes the school’s decision to enforce the provincial law banning smoking and vaping on its property will be effective. (CBC)

Renaud Carpentier, a Secondary 5 student at the school, also agrees with the enforcement.

Carpentier doesn’t smoke or vape, and says he finds his peers at the school do it too much.

“All the students [vape] in class. Not all teachers see that, but I’m a student and I can see it,” he said. “They do what they want, but I think it’s too much. It’s useless … it’s not good for us.”

“Once the first person gets a fine, the next will stop,” Carpentier added.