Watching a Burmese python prepare its dinner is not a pretty sight, as hunter Mike Kimmel recently discovered.

He narrowly avoided becoming the main course for a 17ft-long monster he’d disturbed on a small island deep in the Everglades, the 1.5 million acres of wetlands in southern Florida.

When Kimmel, a licensed python hunter, grabbed it by its tail rather than following standard procedure and holding it by its massive head, he didn’t allow for the creature’s huge reach.

The snake sank its sharp teeth — rearward-pointing to better impale and hold prey — into his arm, slicing a vein just below his elbow and sending blood spattering everywhere.

He was just seconds away from the snake wrapping its body around him and contracting its immensely powerful muscles to squeeze out his life.

Instead, the lone hunter — one of the superstars of this dangerous profession — managed to tie up his bloody arm using a cloth snake bag without letting go of the writhing reptile.

Then, even as he was becoming progressively light-headed from blood loss, he wrestled it back to his small boat and into a crate.

Yet even that close encounter was eclipsed weeks later when two hunters pulled an 18 ft 9 in long ‘beast of a snake’ out of a canal 35 miles west of Miami.

What followed was an epic night-time battle as the python tried to wrap one end of its body around a tree and the other around one of them.

Very little — not even an alligator or a panther — escapes that lethal embrace in tropical South Florida. Experts estimate it takes an hour for a python to ‘walk’ its teeth along a human-sized body until it is completely inside the snake.

Other animals disappear far more quickly — scientists believe 99 per cent of furry critters in the Everglades have been eaten by pythons.

No wonder the Florida Fish and Wildlife Conservation Commission has decided it needed a new, and rather surprising, approach to tackle an apex predator — a creature at the top of the food chain which has no known predators itself.

It has been so successful in its non-native habitat in the hot and wet southeastern tip of the United States, that there are now estimated to be up to 300,000 pythons in the wild. 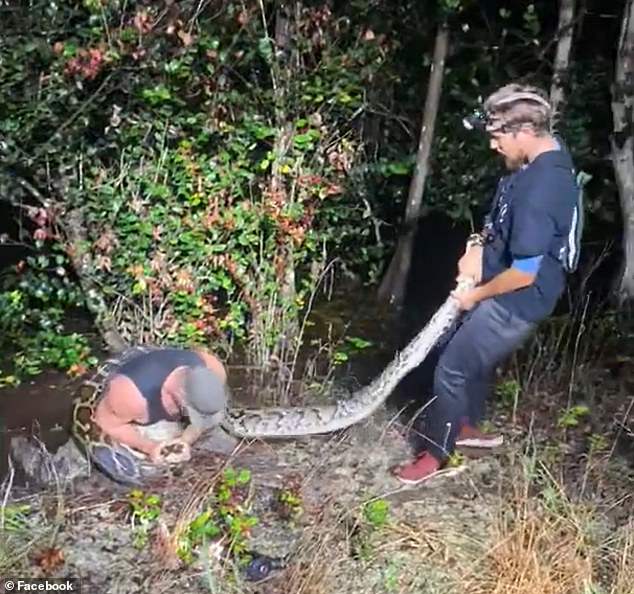 He narrowly avoided becoming the main course for a 17ft-long monster he’d disturbed on a small island deep in the Everglades, the 1.5 million acres of wetlands in southern Florida

The solution? Python meat in various forms is set to be the next big thing on restaurant menus and supermarket shelves.

Since the 1980s, when a small number of pet Burmese pythons were released into the wild — either by owners who could no longer cope or escapees from pet shops destroyed in hurricanes — numbers have rocketed. The commission’s hope is that, by encouraging the public to think of the snakes as a potentially tasty and nutritious meal, the growing python population can be better brought under control.

Chillingly famous for their ability to swallow whole alligators, pigs and adult deer, because of super-elastic tendons that allow the lower jaw to stretch a long way downwards, these non-venomous constrictors are the world’s second biggest snake after the green anaconda. They can grow up to 23 ft long and weigh 400 lb.

Although a large Everglades alligator might just about have a sporting chance, there is no other animal in the Sunshine State that has a hope against them.

And scientists even say some of those on the loose are a more formidable hybrid snake, formed by interbreeding with the Indian rock python which, alarmingly, are faster and can thrive in more places than ordinary Burmese pythons. 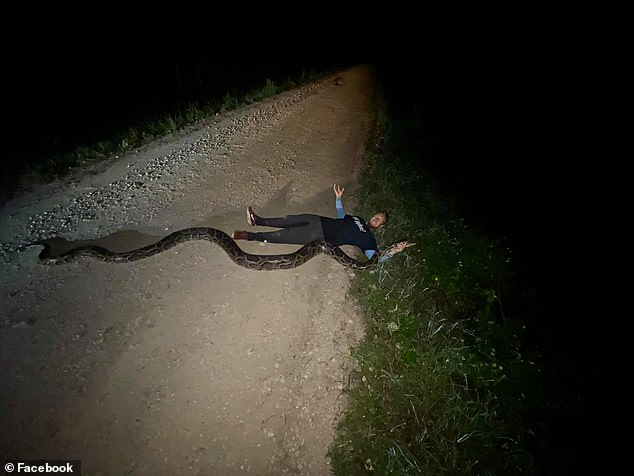 Since the 1980s, when a small number of pet Burmese pythons were released into the wild — either by owners who could no longer cope or escapees from pet shops destroyed in hurricanes — numbers have rocketed

Hybrids or not, the Burmese python has ingested its way through much of the bird and mammal population including endangered species while wreaking havoc on a precious ecosystem.

Today, such is the predator’s death grip on wildlife here — that conservation officials have been forced to go beyond simple solutions, like paying hunters to kill them, including encouraging people to eat them.

First, pythons, like some types of fish, can contain large amounts of mercury.

Levels of the poisonous metal are particularly high in the Everglades, with some pythons caught here registering more than 100 times the safe human limit of mercury. 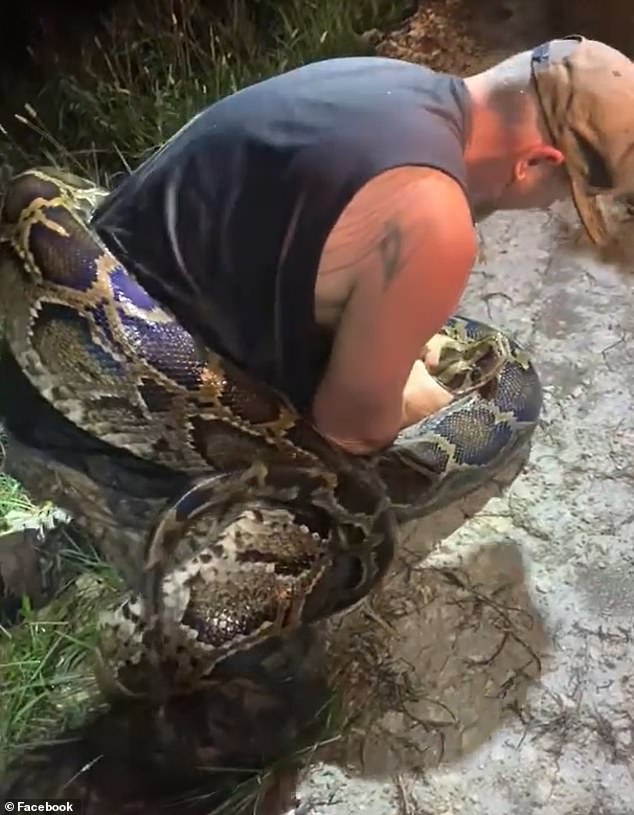 Hybrids or not, the Burmese python has ingested its way through much of the bird and mammal population including endangered species while wreaking havoc on a precious ecosystem

The second challenge, of course, is to persuade people — in a country, after all, that isn’t short of meat — that python is a delicious alternative to chicken, beef or pork.

However, the culinary cultural shift that’s necessary may not be as great as you imagine.

Alligator is already a delicacy in the American Deep South, while rattlesnake is eaten (although not a lot) in the desert South West.

Python is, of course, consumed in China, but since Covid that could stop many Americans from giving it a try.

However, in 2012, a Florida pizzeria, Evan’s Neighbourhood Pizza in Fort Myers, briefly garnered national attention when it launched its $45 python meat-topped Everglades Pizza. 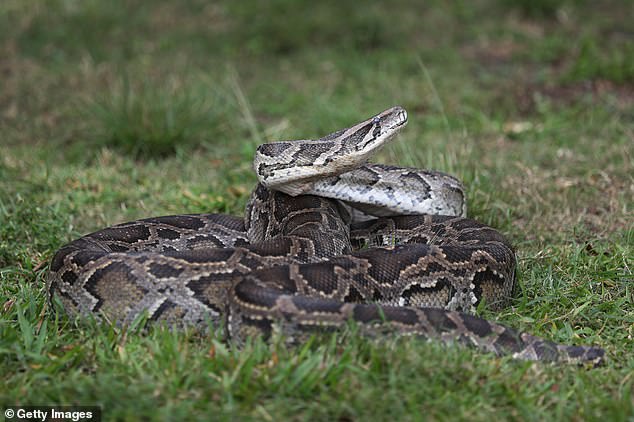 Python is, of course, consumed in China, but since Covid that could stop many Americans from giving it a try

Diners described the python meat as a chewier, gamey version of chicken. Sadly, the restaurant went out of business four years later.

Celebrity chef Gordon Ramsay, who made a TV programme about going python-hunting in Florida, described the meat as rather ‘dry and sinewy’. For the cameras, he ground it up and stir-fried it with shallots, pineapple and jalapeno peppers.

Donna Kalil, the state’s first certified female python hunter who works for the South Florida Water Management District, says she has eaten more than a dozen of them in recent years and makes dried python meat jerky, stir-fried python and python chili.

She warns it is rubbery and tough if not properly prepared. After first slowly removing the sinew and chopping up the meat, she pressure-cooks it for ten to 15 minutes to tenderise it. Then she sautes it with onion and garlic, before adding pasta and a sauce.

She says it has the texture of fish but tastes more like chicken or pork, adding: ‘It’s really good when you cook it right.’

Ms Kalil, an adventurous foodie who has also eaten lionfish and iguana, won’t eat pythons longer than 7.5 ft because she believes the mercury risk is greater in the bigger specimens.

A 7.5 ft python provides a 5ft-long fillet and some three to four pounds of meat. 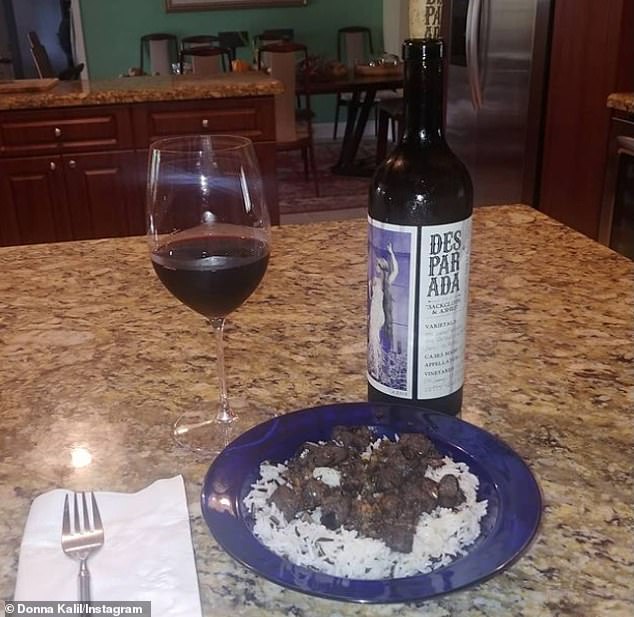 Donna Kalil, the state’s first certified female python hunter who works for the South Florida Water Management District, says she has eaten more than a dozen of them in recent years and makes dried python meat jerky, stir-fried python and python chili. Pictured is one of her dinners

Wildlife officials don’t just expect ordinary Floridians to buy python meat in the shops and restaurants — it appears they’re also expecting them to kill pythons — shooting is the usual method.

Ms Kalil has caught and euthanised nearly 500 pythons, but admits she has had some close calls. An 18 ft python once turned on her in the dark when she approached it in the water. She shot it in the head with a .44 magnum pistol but the snake still managed to get away.

On another occasion, she grabbed a 13 ft python by the head and it proved so powerful it dragged her off a 5 ft dyke on which she was standing ‘like a rag doll’.

Officials already use specially-trained python dogs to sniff out snakes. They also run a bounty programme which pays registered hunters a minimum day-rate plus a bonus of at least $50 for each python they catch — big ones are worth hundreds of dollars and a nesting female (which can lay 100 eggs at a time) is worth $200.

Officials recently celebrated the removal of more than 5,000 Burmese pythons from the Everglades since elimination efforts began three years ago. They have a long way to go. Can python pot pie come save the day?