Dr Hans Kluge, the head of WHO’s European division, has warned the current outbreak of the tropical disease ‘may not be containable’

People should reduce their number of sexual partners to help fight the spread of monkeypox, the World Health Organization has urged.

The WHO stopped short of calling for contacts of known cases to be quarantined but called for ‘critical’ twice-daily temperature checks and ‘close monitoring’.

Dr Kluge said that while cases have been concentrated in men who have sex with men, there was nothing stopping it from spreading to other groups.

The WHO earlier this week upgraded the global threat level to ‘moderate’, warning that community spread could lead to vulnerable patients or children catching the virus, which also spreads from touch, or interaction with contaminated surfaces or clothes.

In total, there have been 606 confirmed cases of monkepox across the globe, with 130 more suspected since the first infection was found at the start of May.

Around 70 per cent of the confirmed or suspected cases have been in Europe, with the UK count now at 190. Only Spain has seen more cases.

The LGB Alliance — a trans-exclusionary gay rights group — attracted criticism on Monday after calling for all commercial sex venues to be closed ahead of Pride month, which begins today. 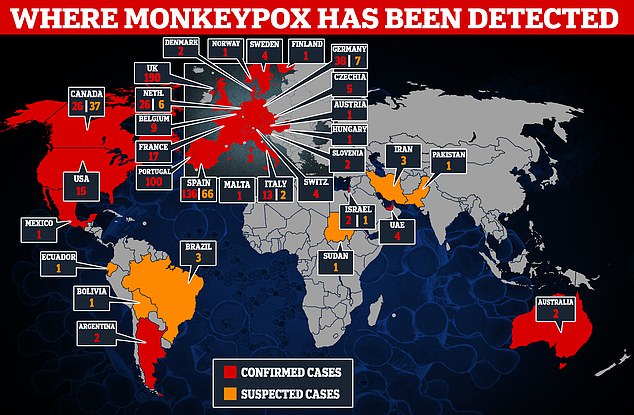 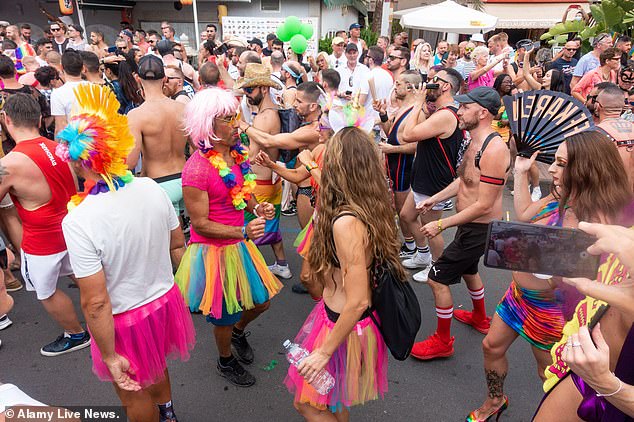 People should reduce their number of sexual partners to help fight the spread of monkeypox, the World Health Organization has urged. Pictured: The Gran Canarian pride festival, held between May 5 and 15 and attended by 80,000 people from Britain and across Europe, is being investigated after being linked to numerous monkeypox cases

The UK Health Security Agency (UKHSA) said the new patients were all in England, bringing the UK total to 190.

Officials said the ‘risk to the general public from monkeypox is still low’ but it is advising anyone with a new rash or scabs to self-isolate.

Until now, those with suspected or confirmed cases of the tropical disease were being urged to seek advice from NHS 111 or a sexual health service.

But officials said the move to introduce quarantine was to prevent further spread ‘now that community transmission is occurring here in the UK and other countries’.

Experts have previously linked the outbreak to two festivals in Europe: The Gran Canarian pride festival, held between May 5 and 15, and a large-scale fetish festival in Antwerp, which ran from May 5 to May 8.

The UK Health Security Agency (UKSA) updated its own guidance on Monday night to tell people to wear condoms during sex for eight weeks after clearing the virus.

Anyone in Britain who develops a new rash or blister is being urged to quarantine and call 111 — and not to leave isolation ‘until you’ve been told what to do’.

They are also been ordered to abstain from sex or close contact with others ‘until their lesions have healed and the scabs have dried off’.

Dr Kluge said in a statement last night: ‘[Europe] remains at the epicentre of the largest and most geographically widespread monkeypox outbreak ever reported outside of endemic areas in western and central Africa.

‘Based on the case reports to date, this outbreak is currently being transmitted through social networks connected largely through sexual activity, primarily involving men who have sex with men.

‘Many — but not all cases — report fleeting and/or multiple sexual partners, sometimes associated with large events or parties.’

Dr Kluge said all young people, regardless of gender or sexuality, are at risk of the virus and should be aware of the symptoms.

He said gay and bisexual communities have shown ‘rapid health-seeking behaviour’, adding ‘we should applaud them’ for coming forward with symptoms early.

But he warned festivals and parties planned over the coming months could lead to further outbreaks of the virus.

He said: ‘The potential for further transmission in Europe and elsewhere over the summer is high.

‘Monkeypox has already spread against the backdrop of several mass gatherings in [Europe].

‘Over the coming months, many of the dozens of festivals and large parties planned provide further contexts where amplification may occur.’

The WHO said event organisers should share ‘accurate, practical and targeted information’ with attendees over summer. 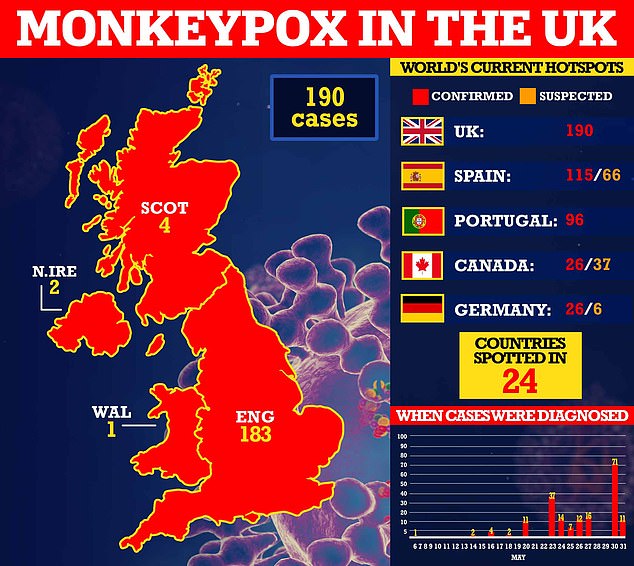 The LGB Alliance had a statement calling for gay saunas to be closed taken down by Twitter on Monday.

In the statement, the group said: ‘Monkeypox is spreading and gay and bisexual men have been affected disproportionately.

‘That’s why we are calling on all commercial sex venues, such as saunas, leather/fetish bars and clubs with dark rooms to be closed for a month.’

Critics accused the group of homophobia, arguing the move would lead to stigmatisation ahead of Pride month.

But LGBA insisted the move would have helped ‘save Pride’ by preventing huge outbreaks just before the main events scheduled over the next four weeks.

Malcolm Clark, head of research at LGBA, told the Daily Telegraph: ‘We were really lucky this time that it wasn’t another Aids, but what would have happened if it was?

‘We would have been complaining about stigmatisation and still taking our time. It appears that 30 years after HIV, we haven’t learnt anything.

He said most transmission is linked to ‘enclosed spaces’ such as nightclubs and there is  no ‘enhanced risk’ of transmission at the annual celebrations.