EXPRESS INFORMER > Science & Technology > Monkey brains are influenced by social interactions, according to a study

The size of monkey brains are influenced by social interactions, a new study revealed, finding more friends in a group leads to larger social regions in the brain.

A team of researchers from the University of Pennsylvania in Philadelphia, studied the brains, and social interactions of a group of rhesus macaques living on Cayo Santiago, an island off the coast of Puerto Rico.

They found that the number of social connections predicted the size of key nodes in parts of the brain responsible for social decision-making and empathy.

Though all these findings relate specifically to free-ranging rhesus macaques, they have possible implications for human behavior, in particular to understanding neuro-developmental disorders like autism, according to the team.

The size of monkey brains are influenced by social interactions, a new study revealed, finding more friends in a group leads to larger social regions in the brain

They found no such link between brain structure and other variables like social status within the group – it was just down to the number of partners.

‘For the first time, we’re able to relate the complexity of social lives of a group of living primates with brain structure,’ says Camille Testard, lead author of the paper.

Previous research on human social networks has hinted at this relationship, according to Michael Platt, study co-author, and head of lab running the tests.

‘The literature, for example, ties variation in the size of the amygdala to the number of Facebook friends that you have. But it’s hard to get granular data on human social interactions because we can’t follow people around all day long,’ he says.

With the rhesus macaques living on Cayo Santiago, an island off the coast of Puerto Rico, however, it’s a different story. 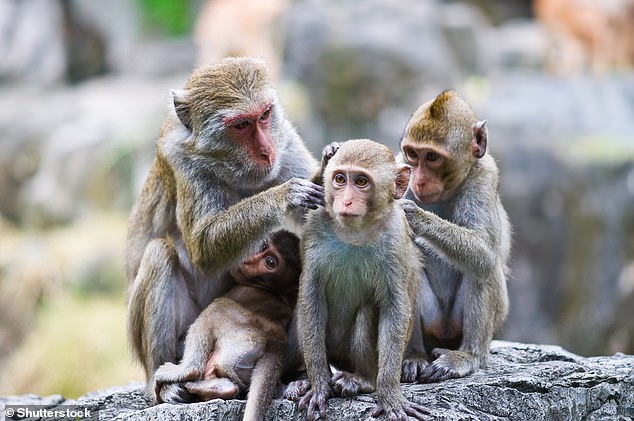 A team of researchers from the University of Pennsylvania in Philadelphia, studied the brains, and social interactions of a group of rhesus macaques living on Cayo Santiago, an island off the coast of Puerto Rico. Stock image

Platt and colleagues have been studying this free-range group of nonhuman primates for more than a decade, focusing on grooming partners.

It is an old world monkey with between six and nine recognised subspecies.

The primate is native to South, Central, and Southeast Asia and has the widest range of all non-human primates.

It can be found at a range of altitudes in Asia, and live in grasslands, as well as arid and forested areas.

They have also been found near human settlements, with feral colonies in the US – likely through human release.

Like other macaques, the rhesus macaque is gregarious with troops comprising 20-200 individuals.

A female’s rank is decided by that of her mother, and rhesus macaques live in a female-led society.

This is an important factor, as it represents direct and important relationships for the macaques, Platt explained. They also looked at the animals’ broader social networks, representing individuals they interact with indirectly.

After Hurricane Maria hit the island, for example, the researchers examined whether the macaques grew or shrunk their social networks in the face of limited resources.

Testard, who joined the lab in 2018, led the analysis for that study, which found that the animals became more social and more accepting of one another, forming new relationships in addition to those they already had.

Building on that and on previous work from collaborator Jérôme Sallet of Inserm, Testard also designed the current study.

The team recorded the detailed interactions of a social group of 68 adult rhesus macaques on Cayo Santiago, then examined five factors of their lives.

These included social status, number of grooming partners, physical distance with other monkeys, connectedness to popular monkeys in the network, and what the researchers called ‘betweenness,’ or the ability to act as a bridge between disconnected parts of the social network.

They also collected brain scans for every individual in the social group, including 35 juvenile and infant macaques.

By analyzing the adult data, Testard and colleagues found that the more grooming partners an individual had, the larger their mid-STS and ventral-dysgranular insula.

‘It was very interesting to find these regions, as their importance is known for social cognition in humans,’ Sallet said.

‘We also identified the mid-STS region in another study showing that activity in this region is modulated by the predictability of others’ behaviors.’ 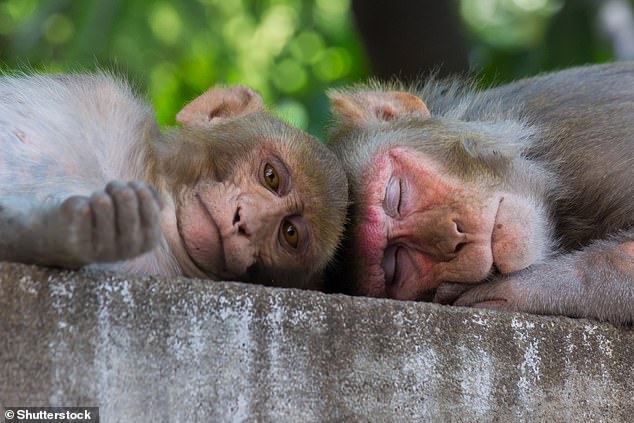 They found that the number of social connections predicted the size of key nodes in parts of the brain responsible for social decision-making and empathy. Stock image

One unexpected finding centered around the infants, according to Testard and colleagues, saying that the work showed young macaques weren’t born with these differences in brain structure but, rather, the differences arose with development.

‘There’s something about the skills it takes to make and maintain a lot of friendships that you get from parents,’ Platt explained.

Howler monkeys live up to their name and love to ‘monkey’ around – especially if it’s during a tense situation, a new study has revealed.

Researchers from Anglia Ruskin University have revealed that adult monkeys increase play when they’re faced with scarce resources, as a way of breaking tension within the group.

‘Despite its appearance and our own perception of what play means, play is not always associated with frivolity or education,’ explained Dr Jacob Dunn, co-author of the study.

‘Instead, we think it fulfils an important function in howler monkey society by reducing tension when there is competition over scarce resources.’

‘You’d think it would be written into your brain when you’re born, but it seems more likely to emerge from the patterns and interactions that you have.

‘Perhaps that means that if your mother is social and you’ve got the capacity to be social, your brain can mature in the way that looks like the findings we’ve uncovered. That’s intriguing.’

This negative result is telling, Sallet said, adding ‘if we had seen the same correlation, it could mean that if you are born from a very popular mother then somehow you have a brain that predisposes you to become more popular.’

‘Instead, what I think it suggests is that the modulation we observe is strongly driven by our social environments, maybe more than by our innate predisposition.’

Though all these findings relate specifically to free-ranging rhesus macaques, they have possible implications for human behavior.

Platt said this would be particularly useful in gaining a better understanding of non-neurotypical individuals, including those with autism, although such connections are still in the distance and would require significantly more research.

For now, the team is moving ahead with additional research studying Cayo Santiago’s population of macaques, looking at facets like whether a natural disaster such as Hurricane Maria affects the animals’ brain structure and how social connectedness influences long-term survival.

They’ll continue to dive deeper into their most recent findings, too, as ‘this is not some lab phenomenon. This is real life, the real world,’ Platt said.

‘This work provides a baseline for understanding how these animals navigate. It’s really thrilling and gratifying that this work done in the field is synergizing work we’ve been doing in the lab for a long time.’

THE SIGNS AND SYMPTOMS OF AUTISM