A remarkable video depicts an unknown shark biting an alligator near a dock in Hilton Head Island, South Carolina.

Cory Conlon was on vacation to the popular tourist area when he spotted the ruthless reptile swimming near an unknown dock.

As onlookers began to throw fish into the water to feed the alligator, a shark started to circle the alligator.

Eventually, the shark got close enough to the alligator and then attacked it.

A shark (circled) was seen attacking an alligator in Hilton Head Island, South Carolina. Cory Conlon was on vacation when he spotted the gator swimming near a dock

Onlookers threw fish in the water, the shark circled the alligator and attacked it

The alligator became startled, charged at the shark, before it backed away and continued on its way

The alligator became startled and started to charge at the shark, before backing away and going about its routine.

‘I was surprised to see this so I filmed it with my phone to show family and friends,’ Conlon told Storyful. 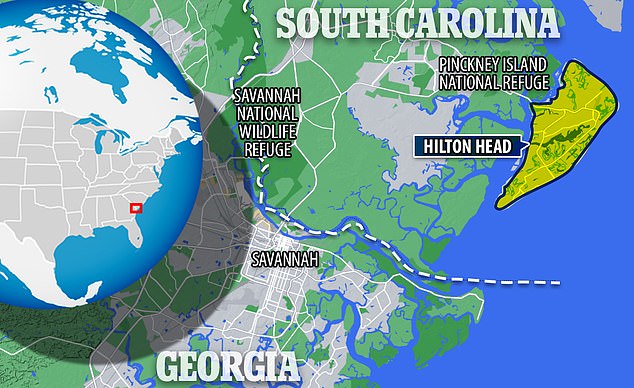 It’s unclear what species of shark it was, but Hilton Head is home to several. Some notable species of sharks that swim in the area include hammerheads, sharpnose, spinners and bonnet-heads

It’s unclear what species of shark it was, but Hilton Head is home to several.

Some notable species of sharks that swim in the area include hammerheads, sharpnose, spinners and bonnet-heads, according to the island’s website.

The attack depicted in the video may be surprising, but it’s not entirely uncommon for the two apex predators to meet and attack one another.

In 2019, a shark and crocodile were spotted fighting over a piece of raw chicken, also in Australia.

In March, a crocodile was spotted eating a bull shark off the coast of North Queensland, Australia.

Researchers James Nifong and Russell Lowers published a study in 2017 that notes alligators will eat sharks, as well as stingrays.

In their research, Nifong and Lowers confirmed four instances where an American alligator ate a lemon shark, a nurse shark, a bonnethead shark and a Atlantic stingray.

There have been some historical accounts of shark versus alligator attacks as well, including one bizarre account that happened in 1877.

Hundreds of alligators huddled near Jupiter, Florida, attracted by fish which were trapped by high tide, National Geographic reported, citing a report from the 19th century sports magazine, The Fishing Gazette.

Spotting an easy meal, hundreds of sharks also arrived in the area.

The two predators eventually attacked one another, with carcasses of both species spotted on beaches 80 miles away, the magazine reported at the time.

Nifong and Lowers also found evidence of other historical fights between sharks and gators, including one from May 1884, when a roughly 10-foot-long shark attacked and killed a seven-foot-long alligator near Pilot Cove, Florida.

As a new study sheds light on the hunting and feeding behavior of sharks, including the dangerous bull shark, these apex predators have long terrified and fascinated humans at the same time.

Bull sharks, commonly found in warm waters, are likely responsible for the majority of near-shore shark attacks, including biting other species.