Nine people, including a two-year-old child, were among the people injured in the pileup which blocked traffic on the bridge for over an hour.

Video and new photographs of the crash emerged on theintercept.com with the driver of the vehicle revealing that he had been using Tesla’s new ‘full self-driving’ feature at the time. 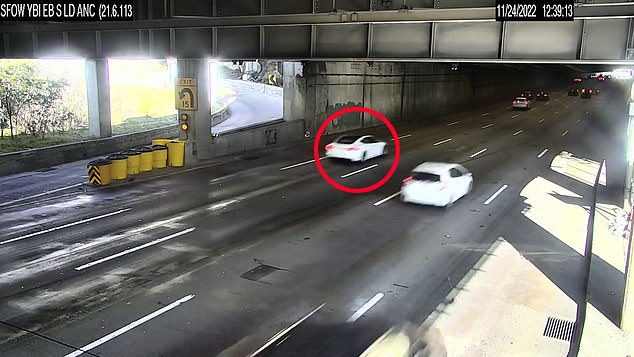 Nine people, including a two-year-old child, were among the people injured in the pileup which blocked traffic on the bridge for over an hour

I obtained surveillance footage of the self-driving Tesla that abruptly stopped on the Bay Bridge, resulting in an eight-vehicle crash that injured 9 people including a 2 yr old child just hours after Musk announced the self-driving feature.

According to the traffic crash report, the Tesla Model S driver told the California Highway Patrol they’d been traveling as about 55mph and shifted into the left lane when the car’s self-driving technology suddenly opted to brake.

In the video footage the white vehicle can be seen merging slowly into the far-left lane before abruptly coming to a stop.

Vehicles driving behind the car can be seen crashing into one another following the presumed vehicle malfunction.

Pictures which emerged from the incident show the vehicles lodged together and stuck on the far-left side wall.

By the end of last year, Tesla had rolled out the ‘full self-driving’ feature to over 285,000 people in North America, according to the company.

The National Highway Traffic Safety Administration, or NHTSA, has said that it is launching an investigation into the incident which happened on Thanksgiving Day last year.

According to NHTSA data, Tesla vehicles using its ‘autopilot’ driver assistance system and ‘full self-driving’ mode were involved in 273 known crashes from July 2021 to June of last year.

Teslas accounted for almost 70 percent of 329 crashes in which advanced driver assistance systems were involved, as well as a majority fatalities and serious injuries associated with them.

Since 2016, the federal agency has investigated a total of 35 crashes in which Tesla’s ‘Full Self-Driving’ or ‘Autopilot’ systems were likely in use. Together, these accidents have killed 19 people.

In recent months, a surge of reports have emerged in which Tesla drivers complained of sudden ‘phantom braking,’ causing the vehicle to slam on its brakes at high speeds. 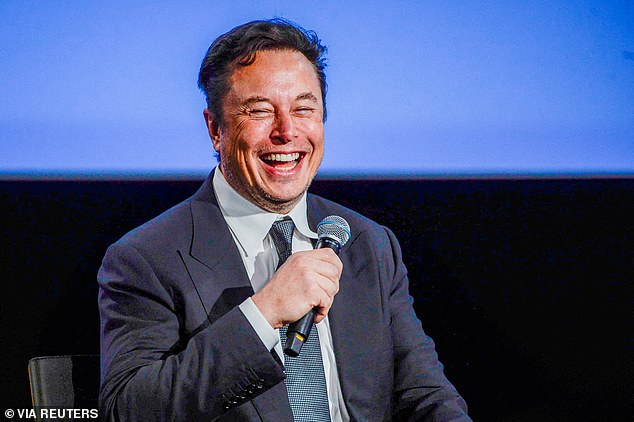 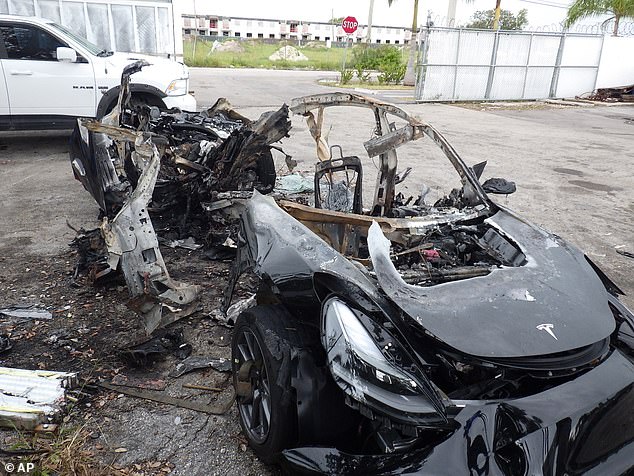 Tesla Full Self-Driving Beta is now available to anyone in North America who requests it from the car screen, assuming you have bought this option.

Congrats to Tesla Autopilot/AI team on achieving a major milestone!

More than 100 such complaints were filed with NHTSA in a three-month period, according to the Washington Post.

The child injured in the Nov 24 crash suffered an abrasion to the rear left side of his head as well as a bruise, the incident report obtained by the outlet states.

Last year, Musk said that ‘full self-driving’ was an ‘essential’ feature for Tesla to develop, going as far as saying, ‘It’s really the difference between Tesla being worth a lot of money or worth basically zero.’

The term ‘full self-driving’ has been criticized by other manufacturers and industry groups as misleading and even dangerous.

This past summer, the agency upgraded its probe to a so-called engineering analysis, which indicates it may be seriously considering a recall.

The NHTSA opened its investigation after 16 crashes involving Teslas.

The California Department of Motor Vehicles has also accused Tesla of false advertisement of its ‘Autopilot’ feature.

The California DMV remains in its discovery stage for the ultimate proceeding.

Once worth more than $1 trillion, Tesla lost nearly 65 percent in market value in a tumultuous 2022, erasing more than $400 billion from the company’s market capitalization.

The Jan 3 slide knocked another $50 billion off Tesla’s value, roughly equal to the valuation of rival Ford, which last year sold three times as many cars as Tesla.