A pair of Texas parents checking on their teenage daughter through their Ring camera while they were away witnessed a horrifying scene as two men held their girl and two friends at gunpoint during a home invasion.

The unidentified couple was able to scare off the armed bandits by speaking to them through the microphone in the home-security camera but not before they looted the home and left the terrified kids with a chilling warning: ‘Don’t pick your f****ng head up or I’ll pop your a**!’

The shocking April 20 incident near Nations and Denmark Drives in Pasadena, a suburb of Houston, was revealed after the couple released the harrowing footage on Facebook.

The clip shows a suburban living room with three kids – one boy and two girls – laying facedown on a rug at around 8:40pm as a pair of men in hoodies point a handgun and an assault rifle at them.

The man with the gun picks up one of the girls by the hair and pushes her out of the room with the weapon at her back while saying, ‘Get up, get up, let’s go.’

Two men broke into the Pasadena home on the evening of April 20th. The homeowners allege that the men used their niece (left, being led out at gun) to gain entry before robbing the home 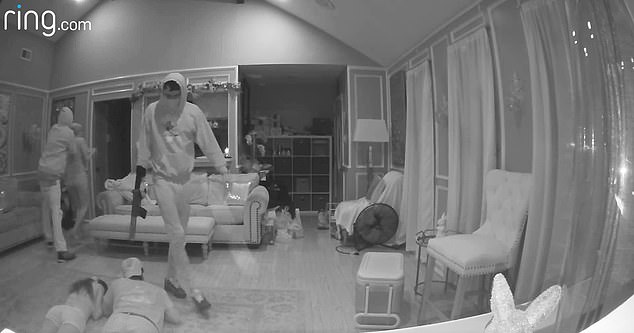 The homeowners’ daughter (left, on the ground) was home with a friend when the incident occurred. They were held at gunpoint and told not to move while the men robbed the house

In her initial post, the mother voiced suspicion that the girl led away by the home-invaders was an accomplice, but later clarified that she was her niece and that the home-invaders had taken advantage of her to force entry into the house.

‘The girl in the video is my husband’s niece, she told my daughter she needed her clothes from my garage. After she came in the two guys rushed my daughter with guns and told her to go inside where I was able to capture it on my ring app.’

As the niece is led out, the boy inches closer to the homeowners’ daughter on the floor with him, then the man with the assault rifle approaches and tells him not to move.

The man hovers the gun over the boy’s head, then circles the pair with the weapon trained on them both.

The daughter on the floor can be heard moaning, ‘Oh my god.’ 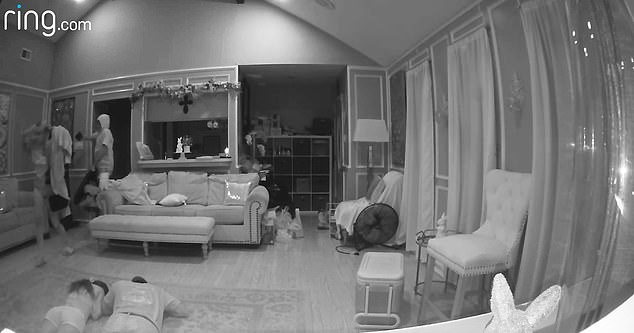 The home invasion was captured on the homeowners’ Ring home-security camera which was trained on the living room. Their daughter could be heard crying in terror on the Ring feed 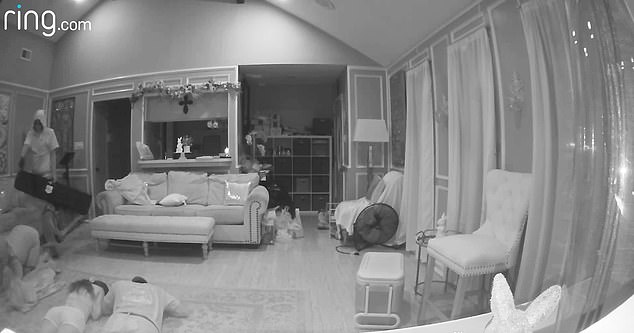 The mother and father of one of the hostages spoke to the home invaders through the Ring camera’s microphone, telling them to leave and that the police were on the way

A commotion can be heard off camera, and the daughter whimpers audibly.

The Ring camera’s microphone then turns on, and the girl’s father yells, ‘Hey, who’s in my house?!’

The gunman looks up from his hostages for a moment, murmurs something, then returns his gaze to the daughter while holding his gun over her back.

‘I got you on camera!’ the dad yells over the microphone.

Then a woman’s voice, the girl’s mother, can be heard shouting, ‘The cops are on the way!’ 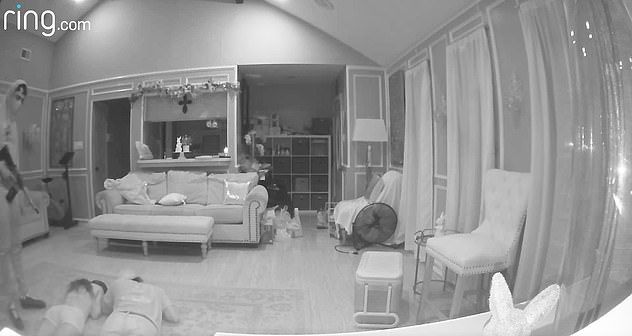 The machine-gun wielding perpetrator calmly looked up at the Ring camera as the father yelled ‘Y’all better get out of my house!’ through the microphone

‘My neighbors are there, they’re calling the cops right now!’ The man and the woman then both yell over each other at the intruders, ‘Y’all better get out of my house!’

The gunman calls, ‘Let’s go’ down the hall to his accomplice while the dad on the microphone again warns, ‘Y’all better get out of my house, now!’

The man with the handgun returns to the living room loaded down with stolen possessions, leading the niece back in to the room at gunpoint.

The kids cower on the ground as the goons slink off camera with their loot in tow and call back ‘Don’t pick your f****ng head up or I’ll pop your a**!’ 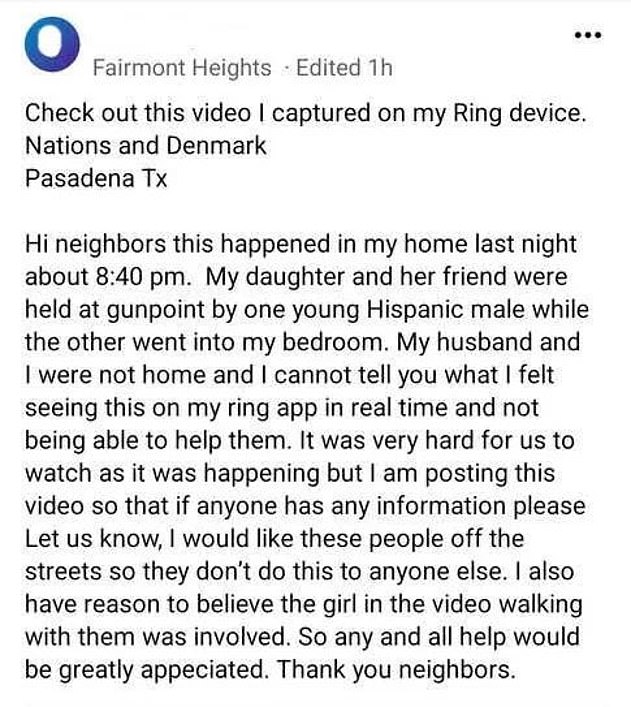 The mother posted this message along with the Ring footage on her Facebook account a few days after the incident, imploring the community to help identify the perpetrators 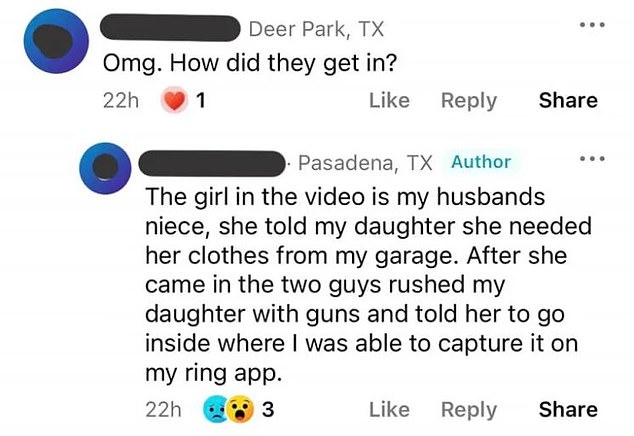 The parents initially misidentified the girl who is led out of the room in the video as an accomplice. They later clarified that she was their niece, and that she was used to gain entry

Pasadena police released a statement on their Facebook account confirming that a home-invasion occurred and was being investigated.

However, the cops were upset that the family posted the video to social media before showing it to investigators, which resulted in ‘undue panic among several citizens.’

‘My husband and I were not home and I cannot tell you what I felt seeing this on my ring app in real time and not being able to help them,’ the mother wrote. ‘I would like these people off the streets so they don’t do this to anyone else.’ 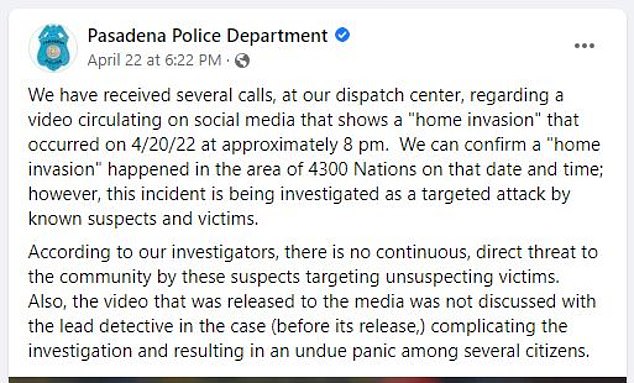 Pasadena police confirmed that they were investigating a home invasion related to the footage. They added that premature release of the video hampered their investigation