A mob armed with makeshift weapons brawled on the street after a protest was held near the Eritrean Embassy in north London – with police making a ‘number’ of arrests at the scene.

Emergency services descended en masse to Islington this afternoon after violence broke out on the streets.

Several members of the group are shown fighting — while carrying poles and other makeshift weapons.

Crowds could be heard shouting, as buses were halted in the street by their presence.

The Met Police said that the incident began as a peaceful protest, before a separate ‘large group’ approached.

This then escalated into a ‘confrontation’, with people shouting at officers in the street, before numerous people were arrested.

Some people in the crowd held their hands in the air, crossing them at the wrist, shouting ‘stop’.

Other protesters sat in the street, blocking traffic from moving past.

In video footage from the scene, a line of police officers could be seen standing together close to the crowd. 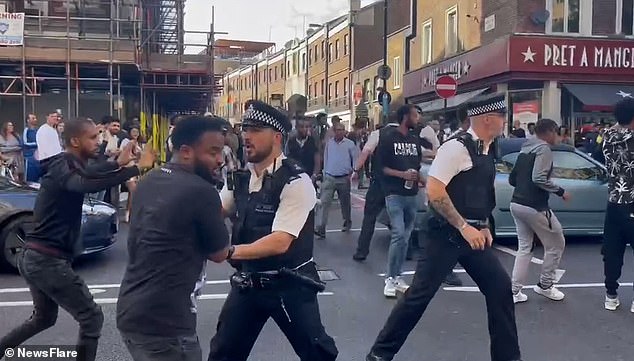 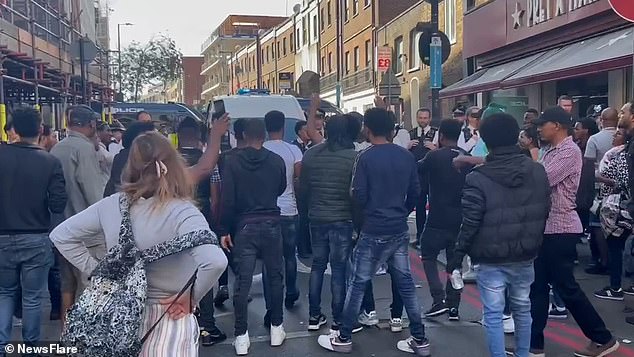 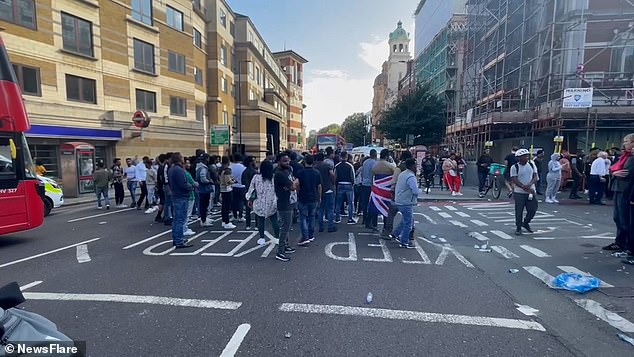 The group of protesters stand in the street, blocking traffic from passing safely 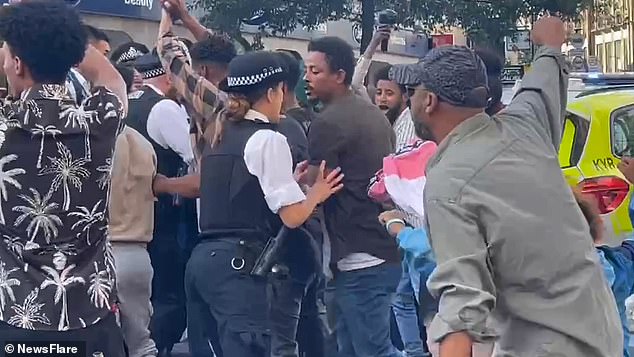 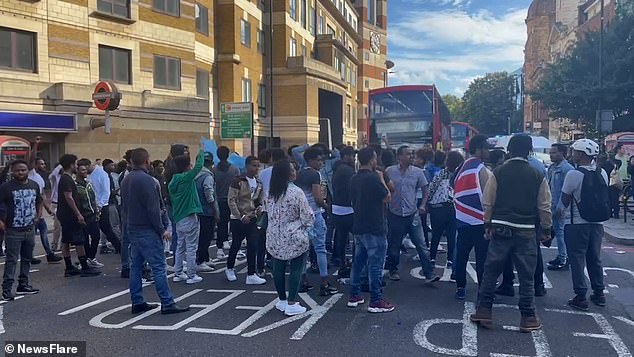 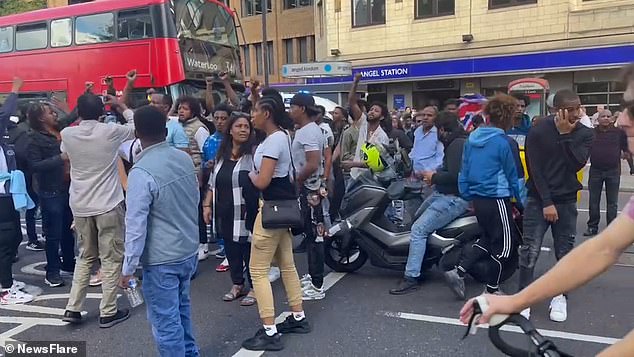 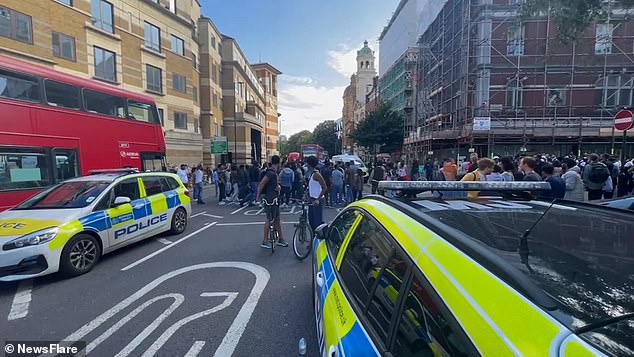 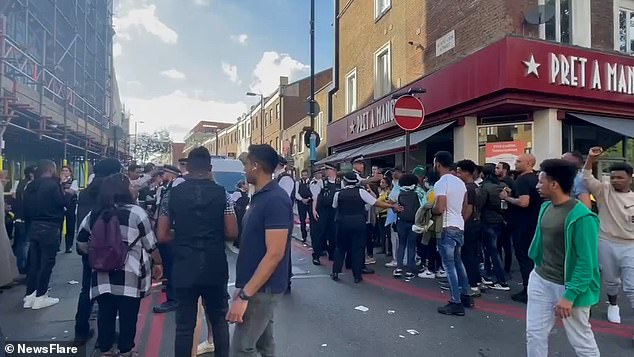 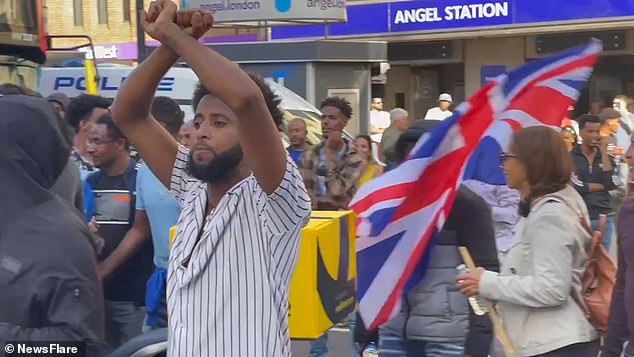 The group blocked the road outside Angel Station, with traffic unable to safely pass 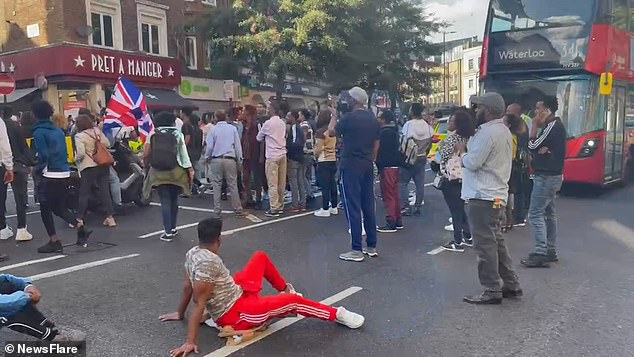 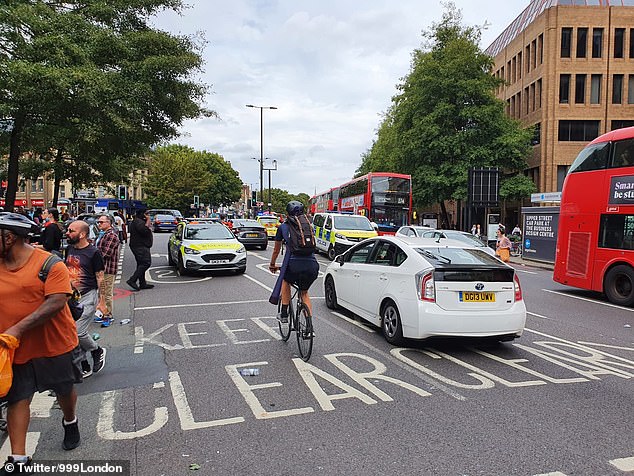 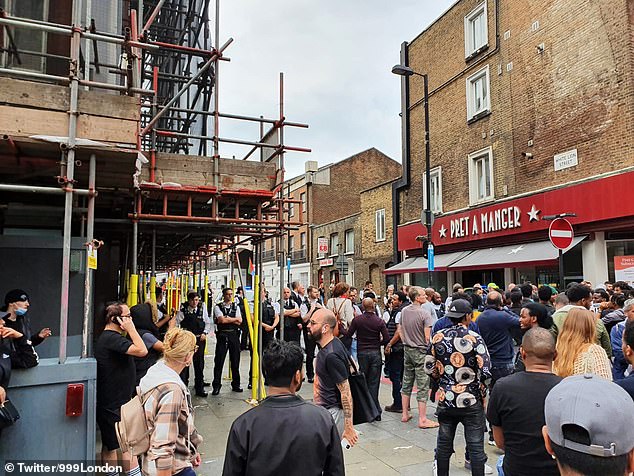 Pictures and video show a large crowd centred on White Lion Street, near the Eritrean Embassy 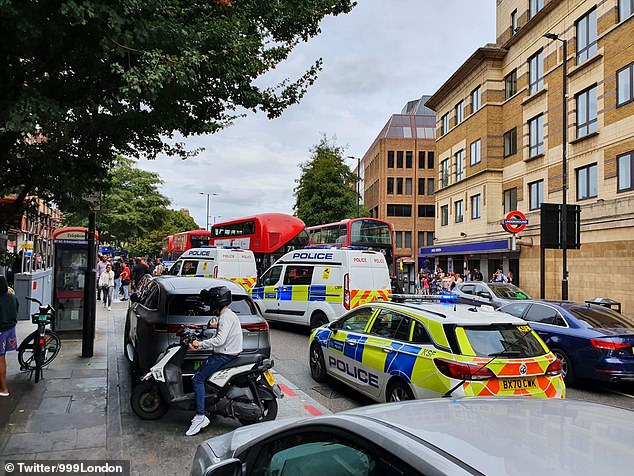 Later on, the protesters stood close to the police line, shouting and raising their hands in the air again, with the group pushing against officers.

As the pushing continued and became stronger, the police line broke, with officers moving the protesters back.

As officers attempted to clear the street so that traffic could pass through safely, the group continued to chant and shout.

The disorder is close to the Eritrean Embassy, with at least one person in the crowd spotted waving an Eritrean flag.

Officers were then seen trying to disperse the group, shouting ‘get back’, with some pushing protesters back along the street.

Former BBC journalist and African specialist Martin Plaut earlier advertised a protest outside the Eritrean Embassy, condemning Eritrea’s occupation of the Tigray region in the north of the country.

The Metropolitan Police said in a statement: ‘Police were called at around 13:35hrs on Sunday, 4, September to reports of a disturbance in the vicinity of the Eritrean embassy in White Lion Street, Islington.

‘A peaceful demonstration had been taking place at the location when a large group approached those demonstrating.

‘A number of people then became involved in a confrontation. Officers attended and separated those involved. A police presence remains on scene and officers continue to monitor the situation.

‘A number of arrests have been made for wilful obstruction of the highway and public order offences. There have been no reports of any serious injuries.

‘A section 35 dispersal order has been put in place covering the location until 13:59hrs on Monday, 5 September.

‘A section 60 order, providing officers with additional search powers, has been put in place for the N1 and EC1 postcodes — this will expire at 23:50hrs on Sunday, 4 September.’