This is the moment a Mexican attack aircraft strafed cartel members who then fired back as a city descended into a warzone following the arrest of drug kingpin El Chapo’s son.

Mexican security forces on Thursday captured alleged fentanyl trafficker Ovidio Guzmán Lopez, nicknamed ‘El Raton’ or The Mouse, in the northwestern city of Culiacan and flew him to Mexico City on a military plane.

The arrest was the result of six months of intelligence work tracking down the 32-year-old, who has allegedly helped to run his father’s operations since El Chapo – Joaquin Guzman – was extradited to the United States in 2017.

But Culiacán has since descended into violent chaos with gunfire and arson, just days before US President Joe Biden visits for a North America leaders’ summit in Mexico City.

Footage posted on Twitter showed what are reportedly armed Mexican military single-engine aircrafts in a strafing run in Culiacán against members of the Sinaloa Cartel. 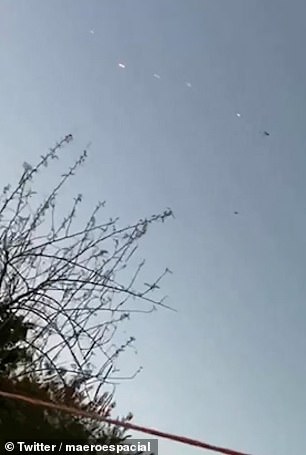 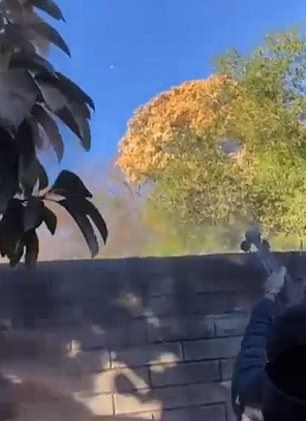 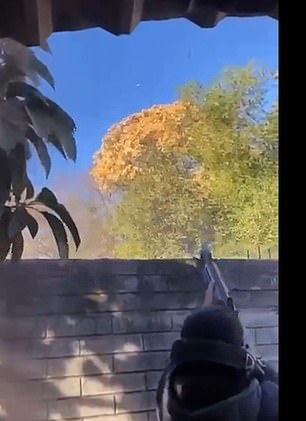 Cartel members fired back with .50 caliber rifles and other weapons, though it is not yet clear whether they managed to hit any government aircraft

Sinaloa cartel have set up roadblocks with machine-gun mounted trucks in a bid to seize Guzman back, causing the city to become a ‘warzone’, according to The Drive.

Cartel members fired .50 caliber rifles and other weapons, though it is not yet clear whether they managed to hit any government aircraft, in what was possibly an attempt to prevent El Chapo’s son being taken to Mexico City.

There have also been fights between government security forces and cartel members on the ground.

It comes as Mexican President Andres Manuel Lopez Obrador is preparing to welcome Biden next week for a North America leaders’ summit in Mexico City, where security is expected to be high on the agenda. 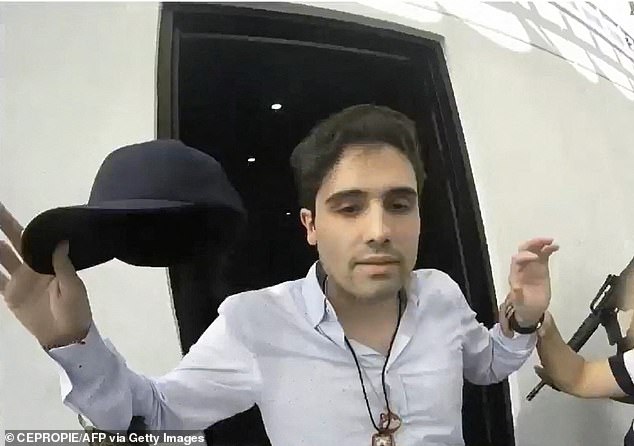 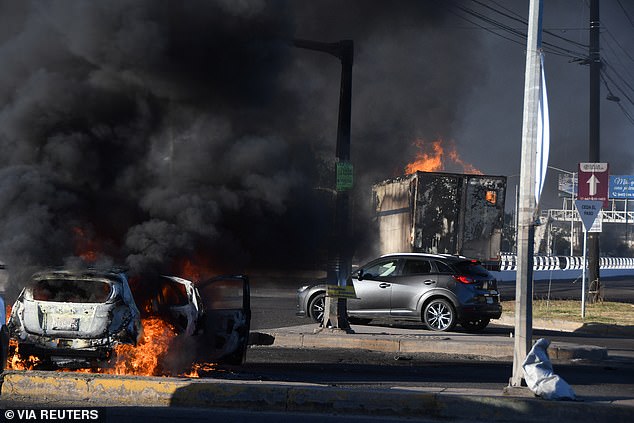 Gunfire and arson shook has shaken Culiacan after the arrest, unlike any its residents have experienced since October 2019. Burning vehicles are seen blocking a road after drug lord Ovidio Guzman’s capture, in Culiacan, Sinaloa, Mexico on January 5, 2023

The arrest comes three years after the Mexican army detained Guzmán but then released him after Sinaloa cartel gunmen seized control of much of the city – in a bed to avoid further bloodshed.

He said the arrest was the result of six months of intelligence work tracking down the 32-year-old, who has allegedly helped to run his father’s operations since El Chapo was extradited to the United States in 2017.

Mexican authorities have accused the younger Guzman of being a key figure in fentanyl trafficking – a synthetic drug blamed for tens of thousands of deaths in the United States.

The US State Department claims that Guzmán and his brother, Joaquín, are currently overseeing approximately eleven methamphetamine labs in the state of Sinaloa.

It’s said they are producing an estimated 3000-5000 pounds of the drug per month.

The United States had offered a reward of up to $5 million for information leading to Ovidio Guzman’s capture, accusing him of being a key player in the infamous Sinaloa cartel.

Gunfire and arson shook has shaken Culiacan after the arrest, unlike any its residents have experienced since October 2019 – the last time authorities tried to capture the young Guzmán.

A National Guardsman was killed and at least 28 people were wounded in the violence, Sinaloa state governor Ruben Rocha said, while school classes were suspended and sporting events in Culiacan were canceled.

Culiacan residents posted video on social media showing convoys of gunmen in pickup trucks and SUVs rolling down boulevards in the city.

At least one convoy included a flatbed truck with a mounted gun in the back, the same kind of vehicle that caused chaos and mayhem in the 2019 unrest.

All entrances to the city were blocked and similar acts were playing out in other parts of Sinaloa.

Reverend Esteban Robles, spokesman for the Roman Catholic diocese in Culiacan, said that ‘there is an atmosphere of uncertainty, tension,’ and that those who could were staying inside their homes.

‘A lot of the streets are still blocked by the cars that were burned,’ Robles said. 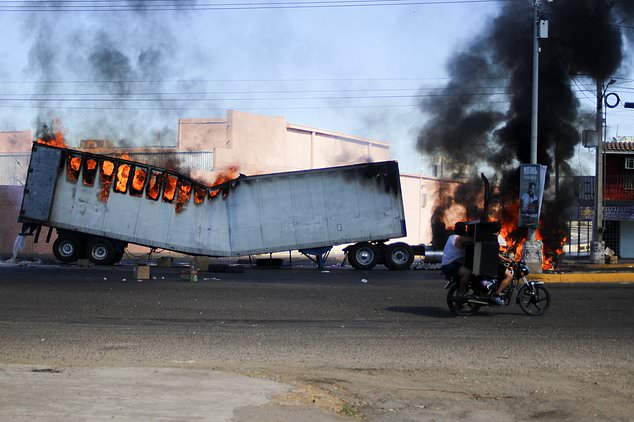 Men ride on a motorcycle past a burning truck on the streets of Culiacan, Sinaloa state 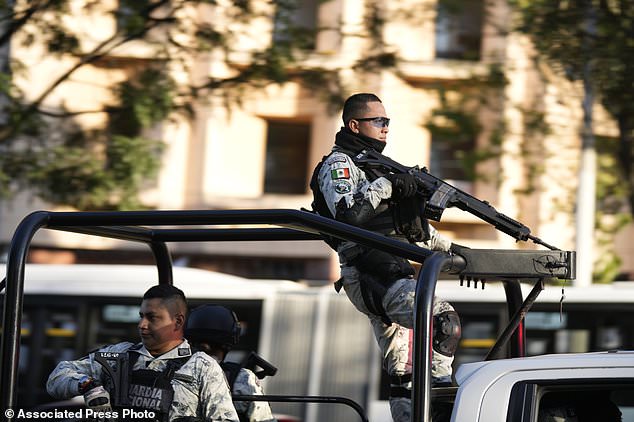 Security personnel guard the prosecutor’s building where Ovidio Guzmán, one of the sons of former Sinaloa cartel boss Joaquin ‘El Chapo’ Guzmán, is in custody in Mexico City 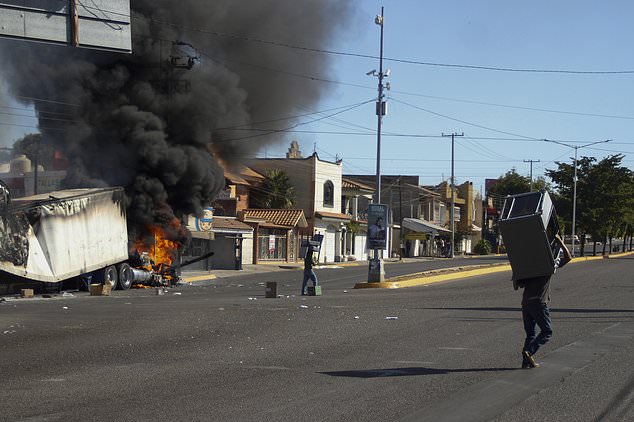 Men carry furniture after looting a store, as a truck burns on a street in Culiacan, Sinaloa state 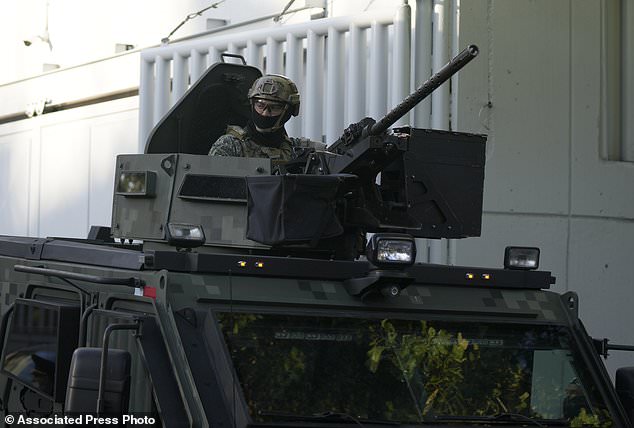 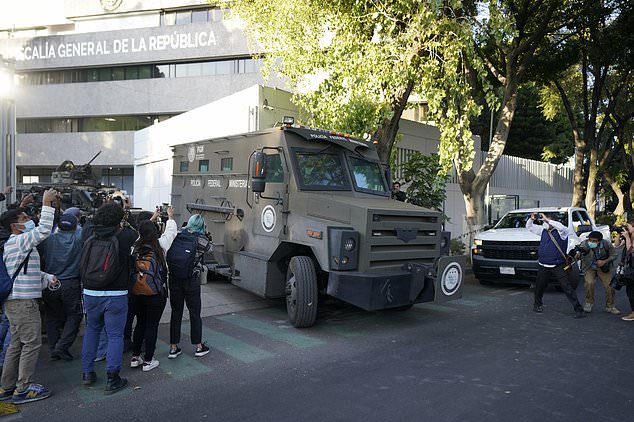 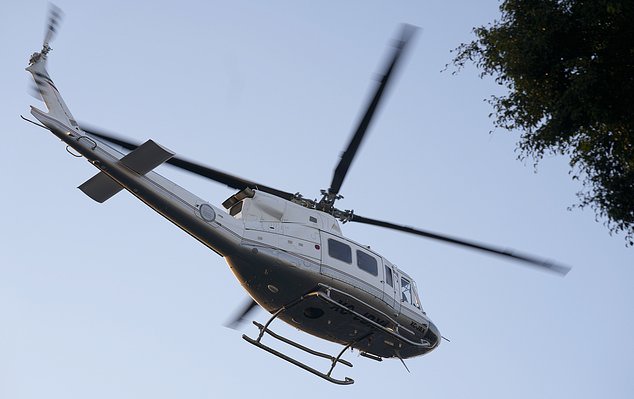 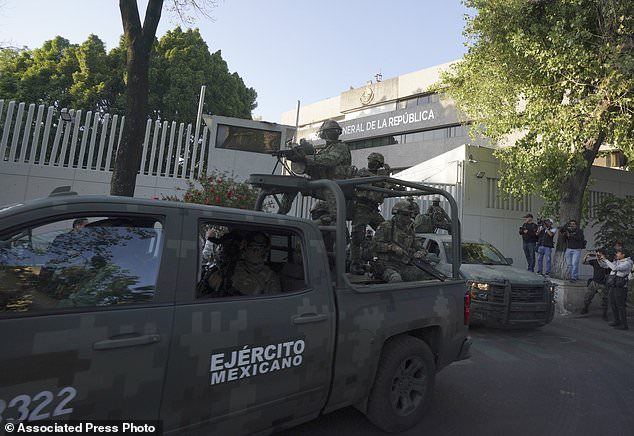 The Culiacan municipal government warned: ‘Don’t leave home! The safety of Culiacan’s citizens is the most important.’ Schools, local government and many private businesses closed.

As Guzman’s henchmen reacted with fury, a passenger jet and an air force plane were both hit by gunfire at the Culiacan airport.

Videos on social media showed passengers and Aeromexico airline employees at the terminal ducking behind counters as gunfire rang out. No injuries were reported there.

El Chapo is serving a life sentence in the United States for trafficking hundreds of tons of drugs into the US over the course of 25 years.

However, his cartel remains one of the most powerful in Mexico, accused by Washington of exploiting an opioid epidemic by flooding communities with fentanyl, a synthetic drug about 50 times more potent than heroin.

Ovidio Guzman and one of his brothers are accused of overseeing nearly a dozen methamphetamine labs in Sinaloa as well as conspiring to distribute cocaine and marijuana, according to the US State Department.

He also allegedly ordered the murders of informants, a drug trafficker and a Mexican singer who refused to perform at his wedding, it said.

Sinaloa is one of the 31 states which comprises the Federal Entities of Mexico and is divided into 18 municipalities. Its capital city is Culiacán Rosales.

It’s also home to the Sinaloa Cartel which has significantly influenced the culture of the region.

The Sinaloa cartel’s armed wing is setting up roadblocks along Sinaloa highways in an attempt to free El Chapo’s son Ovidio, who was arrested this morning.
pic.twitter.com/dXpdnHISrO 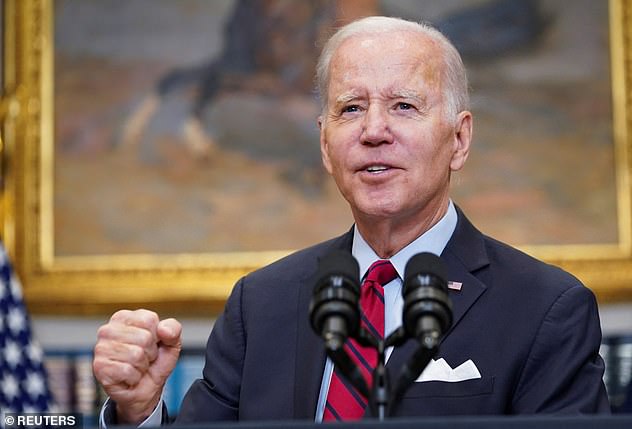 The arrest was confirmed by a senior Mexican security official, who spoke on the condition of anonymity in advance of an official announcement and comes just days before U.S. President Joe Biden’s first visit to Mexico this year

The cartel is reportedly the largest drug trafficking, money laundering and organised crime syndicate in the Americas and based in the city of Culiacán.

Mexico has registered more than 340,000 murders since the government controversially deployed the army to fight drug cartels in 2006, most of them blamed on criminal gangs.

On Sunday, cartel gunmen attacked a prison in the border city of Ciudad Juarez, leaving nearly 20 people dead and allowing 25 inmates to flee.

The next day, seven people were killed during a police operation to recapture the prisoners.

A gang leader among the escapees was killed on Thursday in a shootout with security forces, authorities said.

Juan Carlos Ayala, a Culiacan resident and Sinaloa University professor who studies the sociology of drug trafficking, said Ovidio Guzmán had been an obvious target since 2019.

‘Ovidio’s fate had been decided. Moreover, he was identified as the biggest trafficker of fentanyl and the most visible Chapos leader.’ 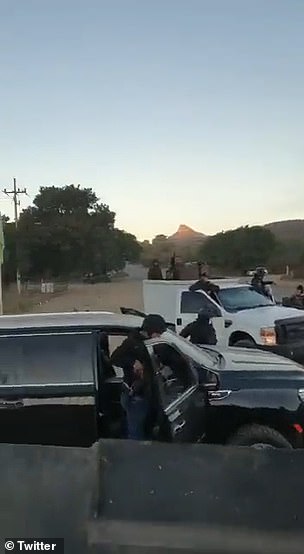 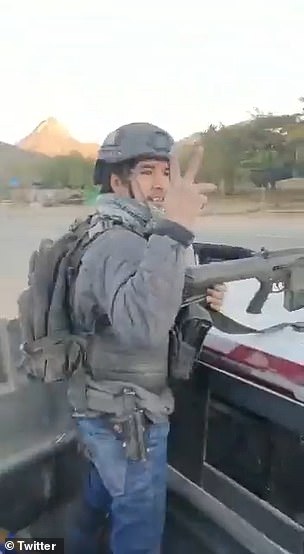 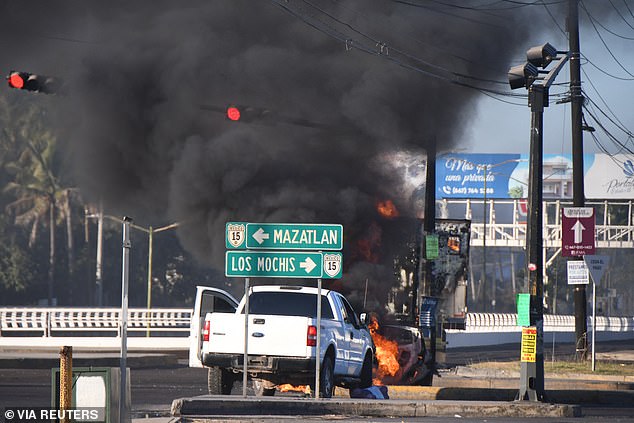 Burning vehicles are seen blocking a road in Culican, Sinaloa after the arrest on Thursday

Asked how locals were reacting to the arrest, Ayala said ‘People have differing views, but I think the majority are with them’.

That may be because of the money the cartel brings to the region, but also because locals know that even after federal troops withdraw, the cartel will still be there. As bad as it is, the cartel has ensured relative stability, if not peace.

Guzmán was indicted by the United States on drug trafficking charges in 2018. According to both governments, he had assumed a growing role among his brothers in carrying on their father’s business, along with long- time cartel boss Ismael ‘El Mayo’ Zambada.

Foreign Affairs Secretary Marcelo Ebrard confirmed that the government had received a request in 2019 from the United States for Guzmán’s arrest for purposes of extradition. He said that request would have to be updated and processed, but he added that first an open case in Mexico awaits Guzmán.

Ismael Bojorquez, director of the local news outlet Riodoce, which specializes in coverage of the area’s drug trafficking, said the violent reaction had to do with the president’s less aggressive stance toward organised crime.

‘They (cartels) have taken advantage of these four years to organize themselves, arm themselves, strengthen their structures, their finances,’ he said.

‘I believe there are more weapons than three years ago. All of organized crime’s armies have strengthened, not just the Chapitos, and this is the price that society is paying for this strategy of the federal government.’

At Culiacan’s airport, a Mexican military flight was able to spirit Guzmán away to Mexico City.