This is the moment a daring dog has discovered how to skate on ice and enjoys skidding across frozen marshland.

The excited pup was out for a walk in Plymbridge, Plymouth, when it sniffed out a huge, frozen over piece of marshland.

Footage shows the dog running across the frozen surface and skidding every time it tried to stop. 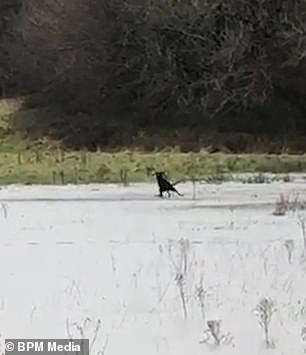 The excited pup was out for a walk in Plymbridge, Plymouth, when it sniffed out a frozen over piece of marshland and began skidding over the surface while playing fetch with its owners

After tentatively taking a few reassuring steps, the dog quickly established there was no risk and began skidding over the ice.

The cheerful animal wagged its tail in excitement as it played fetch with it’s owners who were standing on the edge of the frozen marsh.

A couple of dogs ran on the field beside the ice skating animal and tried to play, but that didn’t stop it sliding around.

The pet seemed quite content sliding around on its own using its paws as skates as it slipped across the surface.

The person who filmed the video, named Erin, was out walking when she saw a couple stood by what looked like an ‘enormous frozen puddle’.

She said: ‘It was so funny to watch the dog sliding around as it played fetch. I attempted to walk on it too, but fell through. It was only very shallow. 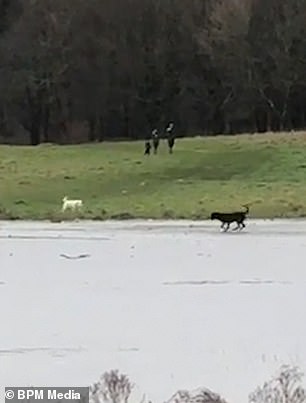 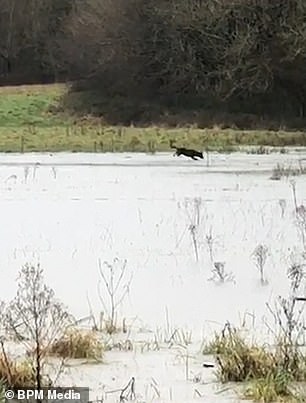 A couple of dogs ran on the field beside the ice skating animal and tried to play, but that didn’t stop it sliding around having fun on its own

‘They had their wellies on so they were able to walk onto the frozen water a little bit before it cracked.’

She added: ‘Then another couple of dog walkers came and their dogs started running around on the ice.

‘They were all small enough dogs that they didn’t crack the surface. It was just so sweet.

‘People with small dogs were letting them run on the ice but the bigger dogs and people were not willing to risk it.’