The Welsh fight back! Moment furious Tesco shopper yells ‘rip the f***ers off’ as he tears plastic sheets from ‘non-essential’ items banned in ‘disgraceful’ Covid crackdown by his government

A furious man has been filmed removing coverings on non-essential items in a Welsh supermarket.

Gwilym Owen, who was not wearing a mask, is seen removing covers in a shop which are no longer allowed to sell under the new Welsh lockdown restrictions.

Gwilym Owen, who was not wearing a mask, is seen removing covers in a shop which are no longer allowed to sell under the new Welsh lockdown restrictions 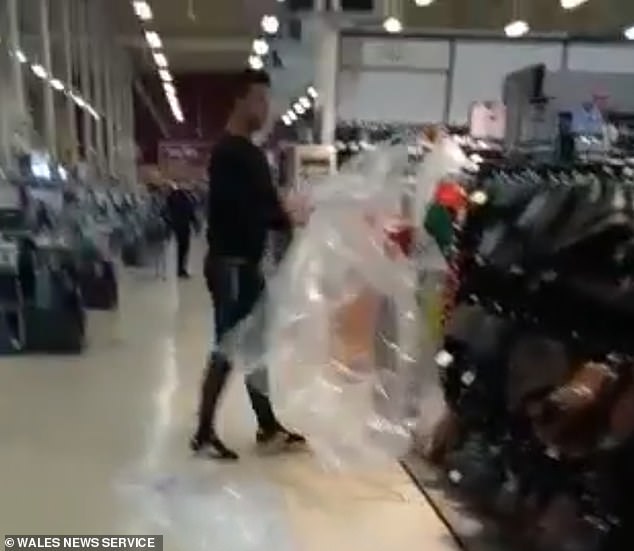 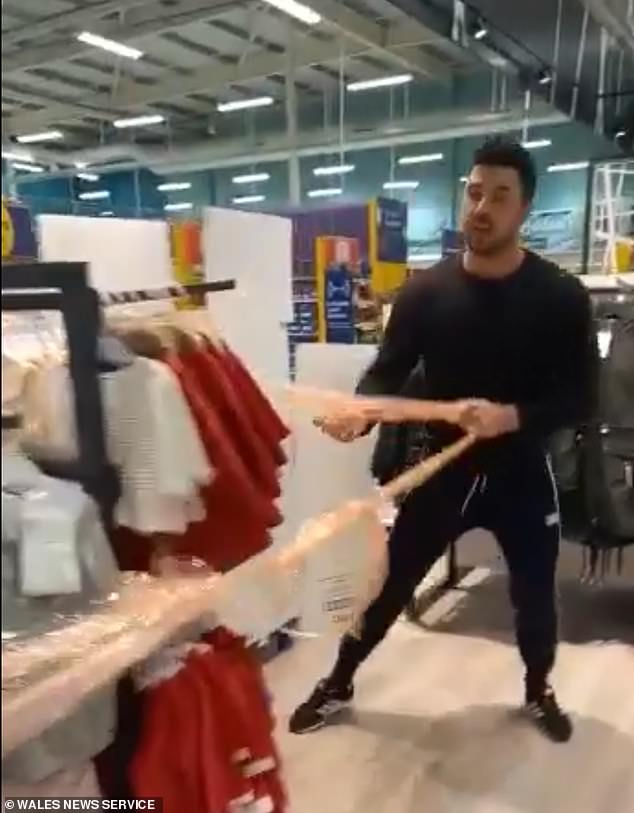 He added on Facebook: ‘I had enough last night. I don’t care about the backlash that I may get from this’

He added on Facebook: ‘I had enough last night. I don’t care about the backlash that I may get from this.

‘Last night I heard supermarkets have put covers over ”non essential” things such as clothes.

‘We’re heading into winter now and who would have thought clothes for children weren’t essential?

‘I’m sure there are people out there who can barely afford heating in their houses and now they want to stop people buying clothes in supermarkets.

‘So no I’m not ashamed of what I’ve done. The government is corrupt, but what’s more damaging to society is the fact that people are not standing up against this machine.

‘I ask everyone can we all wake up and have a backbone and not let this tyranny run for any longer?

‘Things will only get worse If we do not make any effort in stopping this madness. I’m not prepared to live in a society where they can take basic human needs away like being able to buy new clothes, especially for children.

‘So I’ll do what I can to stop it. I’ve had it up to my tether with what’s going on and we need more people to take a stand for what is right! This was my stand last night.’

It comes after police revealed plans to patrol the Anglo-Welsh border to stop families from crossing over for a half-term holiday as Wales is plunged into a two-week ‘firebreak’ lockdown.

Meanwhile Gloucestershire Police announced an operation covering routes from Wales into the Forest of Dean where officers will stop motorists travelling into England to find out what they are doing.

Drivers will be encouraged to turn around and head back to Wales if officers ‘are not satisfied with their explanation’, a spokesman said. If they refuse, police will tell forces in Wales so they can issue fines.

But drivers were yesterday seen crossing the border on the A494 at Queensferry and on the A5445 between Chester and Wrexham in a breach of the new restrictions.

Mr Drakeford has threatened to use number plate recognition cameras to fine English drivers crossing into his country.

His call was echoed by Scotland’s First Minister Nicola Sturgeon, who threatened to roll-out a similar travel ban across Scotland to stop people travelling from virus hotspots in England.

But the Police Federation of England and Wales has revealed the ban is ‘unenforceable’, adding policing which is ‘already over-stretched due to the pandemic’ would be complicated by the measure.

Wales was plunged into a draconian ‘firebreak’ lockdown at 6pm yesterday and it is expected to wreck the Welsh economy.

Under the measures, which will last 17 days, people will be asked to stay at home and to leave only for a limited number of reasons, including exercise, buying essential supplies, or to seek or provide care.