EXPRESS INFORMER > News & Politics > Moment councillor, 66, finds out he has become grandfather for the first time while on Zoom

Heart-warming moment councillor, 66, finds out he has become grandfather for the first time – while trying to chair a meeting on Zoom

This is the heart-warming moment a councillor discovered he had become a grandfather for the first time – as he tried to chair a meeting on Zoom.

The video shows Nottinghamshire county councillor John Cottee, 66, suddenly celebrating the momentous moment in the middle of the meeting.

Mr Cottee – who had his microphone off at the time – was chairing a Zoom meeting of the council’s Communities and Place Committee when he was left ‘gobsmacked’ by a text message from his daughter Nicola.

Appearing to lose his train of thought as the conversation led back to him, he told the attending councillors: ‘I do apologise. I’m a bit excited, I’ve just become a grandad for the first time.’

Mr Cottee said he felt he needed to explain himself out of respect as the meeting was about Remembrance Sunday.

Those on the call were visibly buoyed by the news and congratulated Mr Cottee.

‘I just looked down at the text and saw it was my daughter. I think a bit of a beam came on my face,’ Mr Cottee said.

‘The officer opposite me just sort of said, “you all right?” I said, “I bloody well am”.

‘Obviously I knew I was going to be a granddad. But I didn’t realise it was actually going to happen during the meeting.’

He added: ‘It threw me out completely. I was gobsmacked!

‘It’s one of the nice bits of life, isn’t it? You’ll always remember that.

‘During this crisis, we had a very lovely moment.’ 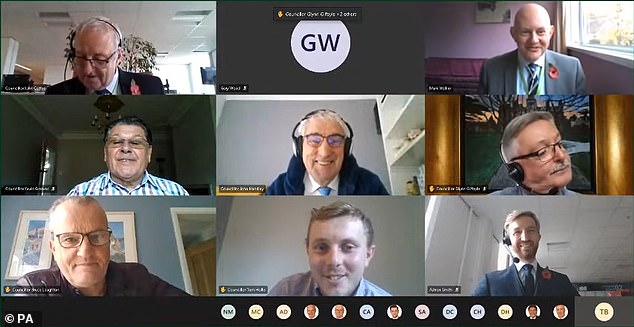 The video shows councillor Cottee, 66, suddenly celebrating the momentous moment in the middle of the meeting

The councillor, who represents Keyworth for the Conservatives, said he is hoping his family can all meet up together at Christmas.

He has ordered a train set for the newborn because he said he was ‘denied’ having one when he was young.

Mr Cottee added: ‘I keep saying to my two daughters that I’m too young to be a grandad. I mean, I’m probably not.

‘But both Lorraine, my wife, and I are absolutely delighted.’