A brazen thief sends sparks flying as he uses an angle grinder to steal a bicycle in broad daylight.

The man, seen standing between two other bikes, was caught on video as he worked to free the two-wheeled machine in Oxford Road near Manchester University.

As he calmly sawed through the metal several people stopped to watch him at work but no one made any attempt to stop the crime.

At one point the crook stops and realises he is being recorded but barely acknowledges the phone before getting back to it.

The clip starts with the man recording the video saying: ‘That guy’s robbing that bike!”

A young woman later asks ‘is he stealing?’ to which he replied: ‘Yeah.’

The sparks continue to fly as the crook grinds the lock and the video cuts shortly after.

Thankfully the thief did not get away with somebody else’s property in the end, as according to onlookers a member of the public finally intervened.

Several social media users were shocked by the attempted crime.

One said: ‘Never worked a day in their life and want to steal from other people.

‘Scum of the earth.’

When asked why no one was stopping it, another replied: ‘He’s got an angle grinder, why would anyone go up to him lol.’

A spokesman for Greater Manchester Police said: ‘Police were called at around 4pm on Monday 15 February to a report of a bike being stolen the previous day (Sunday 14) on Oxford Road, Manchester.

‘No arrests have been made.’

Last year two hooded crooks used one of the tools to steal a £1,000 electric bike from Holborn in London.

They managed to cut through a security chain in just eight seconds before riding off. 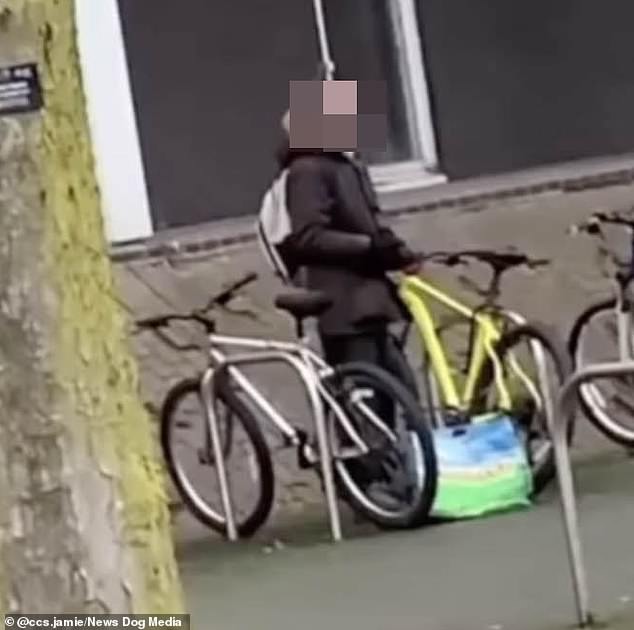 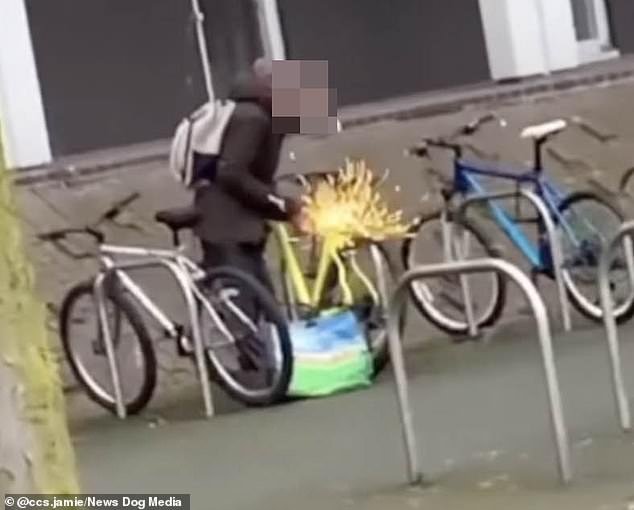 A witness said at the time: ‘I heard the angle grinder go off. I called out to them, but they just told me to **** off.

‘It all happened so quickly. There were people milling about, but they didn’t seem to care who saw them.’

According to insurance figures as many as 20,000 bikes are stolen each year in London.

Website stolen-bikes.co.uk lists all the bikes that have been stolen and owners are able to post a photo of theirs in the hope that they might be recognised before being sold on.