This is the shocking moment a DPD van driver repeatedly hits a parked car as he tries to negotiate a tight junction, before driving away from the scene.

Footage shows the delivery driver bashing the car as he apparently tries do a three-point turn in Retford, Nottinghamshire.

The incident, which took place on November 2, was caught on CCTV by local resident Lewis Oxley, 36, who said he was ‘gobsmacked’ by the driver’s actions.

In the video, the DPD van can be seen blocking the junction of Tunnel Road and Century Road.

The driver attempts to reverse and bumps the side of the car as he does so.

He then attempts to manoeuvre out of the spot and again hits the car which can be seen rocking back and forth with each impact.

He gets out to check the damage, then walks beside the car and looks into the house that it is parked in front of.

He turns around, heads back into the van.

Lewis can be heard narrating the video saying: ‘Look at him bang into the car. The car is moving. And again.

The DPD driver reversed into a parked car at a junction in Retford, Nottinghamshire

‘He’s got out to have a look and see what damage he has done. Nobody is looking.

Lewis’ wife can be heard saying: ‘I bet he is sweating.’

As the driver starts to reverse towards the other side of the road, one of Lewis’s neighbours comes out to help him.

This time the driver manages to get the right angle and quickly makes his escape, driving out of shot.

He said his neighbour’s car had been left with ‘significant’ damage following the incident. 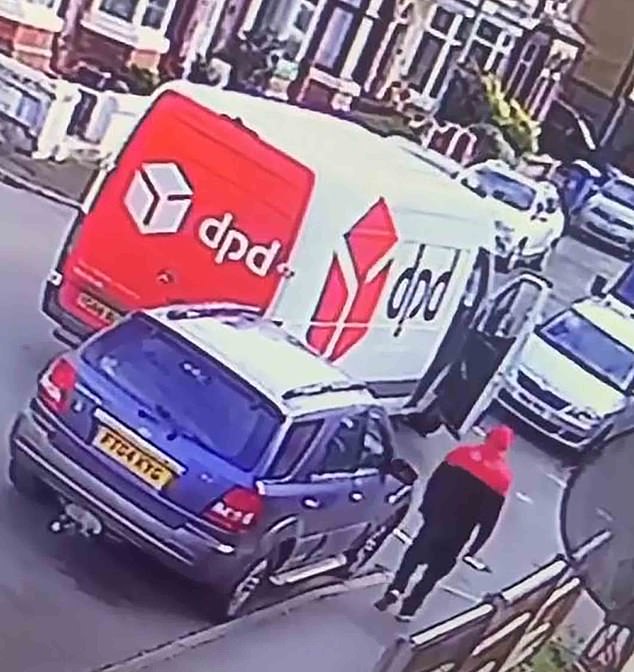 He added: ‘I was gobsmacked, I couldn’t believe it when I saw it.

‘I know accidents happen, but they should have experience.

‘He obviously does not have any experience driving.’

Although, another, Shakil Mohammed posted a word of warning to car drivers, saying: ‘That’s why you should also not park on a junction.’

A spokesperson for DPD told MailOnline today:’We have just been made aware of this incident and have immediately launched a full investigation.

‘At DPD we take the behaviour of our people very seriously indeed and we will always take firm action where their conduct is found to fall below our high standards.

‘Clearly, leaving the scene and not reporting the incident to the depot is not what we would expect from one of our drivers.

‘We will identify the individual concerned and take all appropriate action.

‘We have also taken steps to identify the owner of the damaged vehicle and will ensure that the situation is resolved satisfactorily.’