CCTV footage shows 11 vehicles – including a police van – crashing into steel bollards in the space of just four weeks.

The residential road in Watford was narrowed to just 7ft with two 2ft-high bollards positioned on either side a decade ago, in a bid to prevent heavy goods vehicles using the road as a shortcut.

Residents say they have been going to the council for the last ten years asking for the width restriction to be altered.

Resident Tim Vigor, who said hundred of cars and vans have crashed since, decided to set up cameras to record the incidents over the past month in order to show how bad the issue is.

His footage captures unaware drivers at the exact moment their vehicle hits the bollards located in Woodmere Avenue, Watford.

Vehicle after vehicle collides with the kerb and bollards in almost identical manners.

Some vehicles approach the narrow lane at speed while some crawl through – yet all end up in the same situation, as they mount the kerb on the passenger side and are stopped in their tracks by the bollard.

This causes all the vehicles to bounce up on their passenger side due to the impact – with one of the cars doing so at such force that smoke pours out of the bonnet. 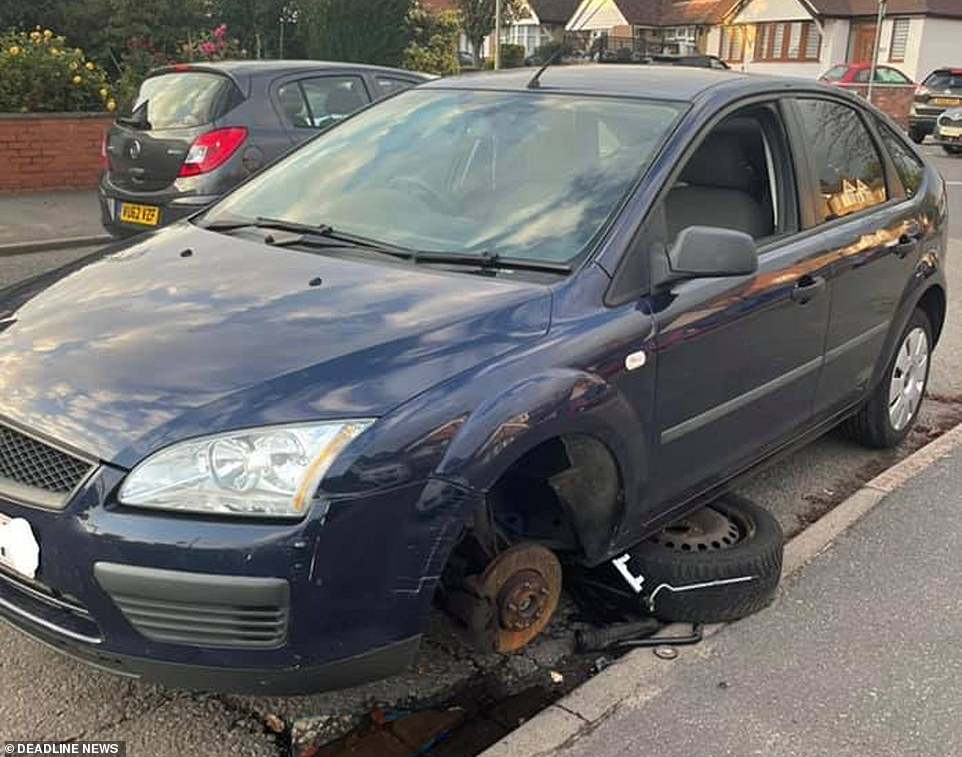 In the past four weeks, 11 vehicles have crashed into the bollards, including this one which had its wheel ripped off 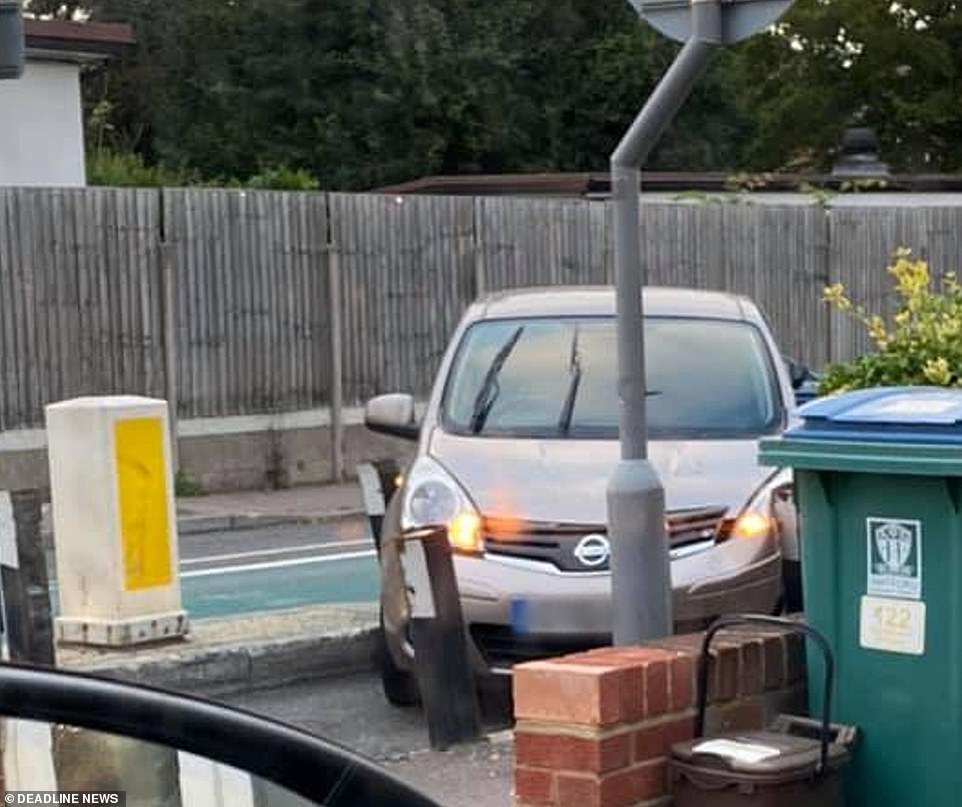 Watford Council said a width restriction of seven-feet was first introduced in Woodmere Avenue in March 1980.

The council said the width restrictions sustained damage, however, and, in February 2011, stiffened posts were installed to ‘resist vehicle strikes and reduce maintenance costs’.

The council said these posts would ‘restrict any vehicle which is over 7ft in width’.

In the past four weeks, 11 vehicles, including a police van, have crashed into the island and steel bollards designed to restrict the width of the road.

Mr Vigor, a 52-year-old HGV driver, has been sharing the videos to a local Facebook group, which have gained hundreds of likes and comments on social media, with users up in arms about who the fault lies with.

Councillors and representatives of the highways agency have reportedly visited the site but, according to Mr Vigor, little is being done.

Speaking today, Mr Vigor said: ‘What they did when they altered this width restriction is that they put the posts directly in line with the kerb.

‘They didn’t set them back off the kerb, six inches or so into the pavement.

‘My next door neighbour’s got a drop kerb so when cars approach the width restriction they don’t know whether they’re on the road or the pavement.

‘So as you approach, if you are on the pavement, the first you know about it is when you go up the first kerb straight into the post. That’s why all the vehicles are taking off on one side.’

Picture shows what motorists would see on the approach to the road narrowing restrictions in Woodmere Avenue. A sign on the left hand side says vehicles wider than 7ft are not allowed through 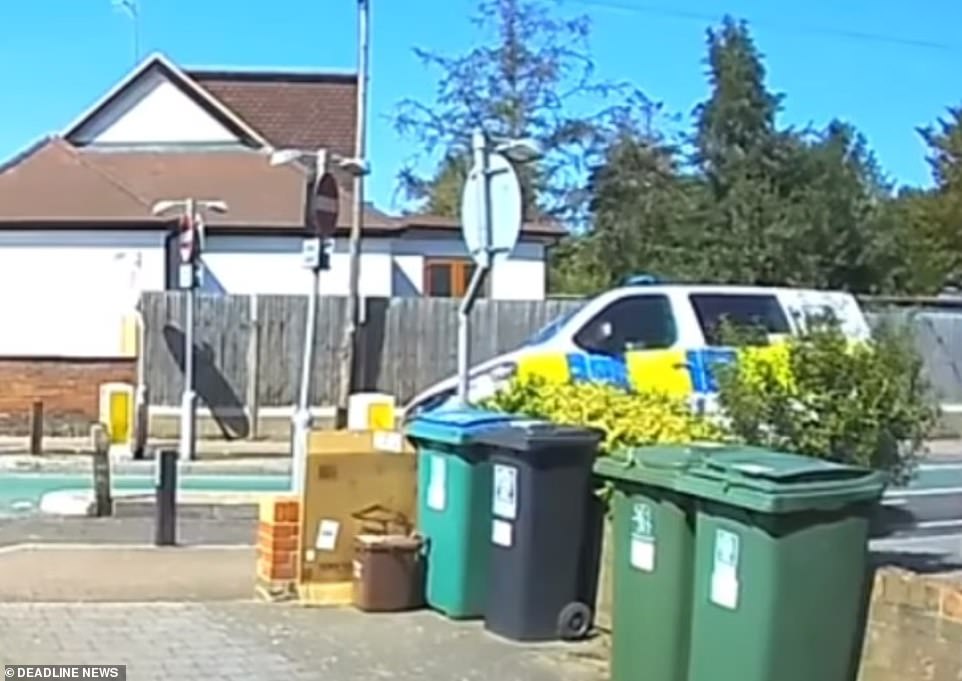 In the past four weeks, 11 vehicles, including a police van, have crashed into the island and steel bollards designed to restrict the width of the road 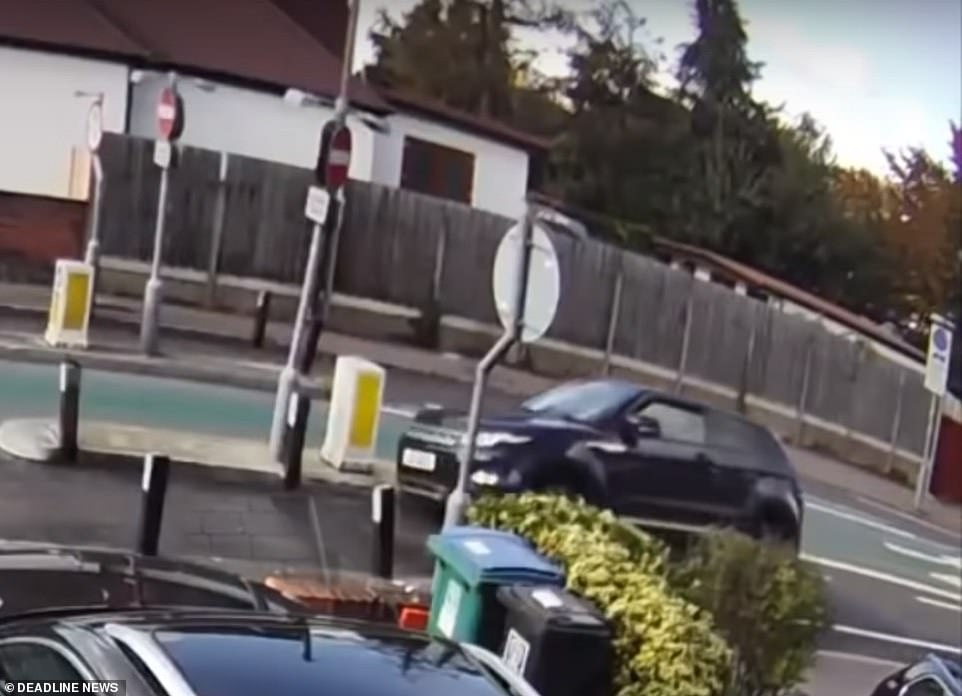 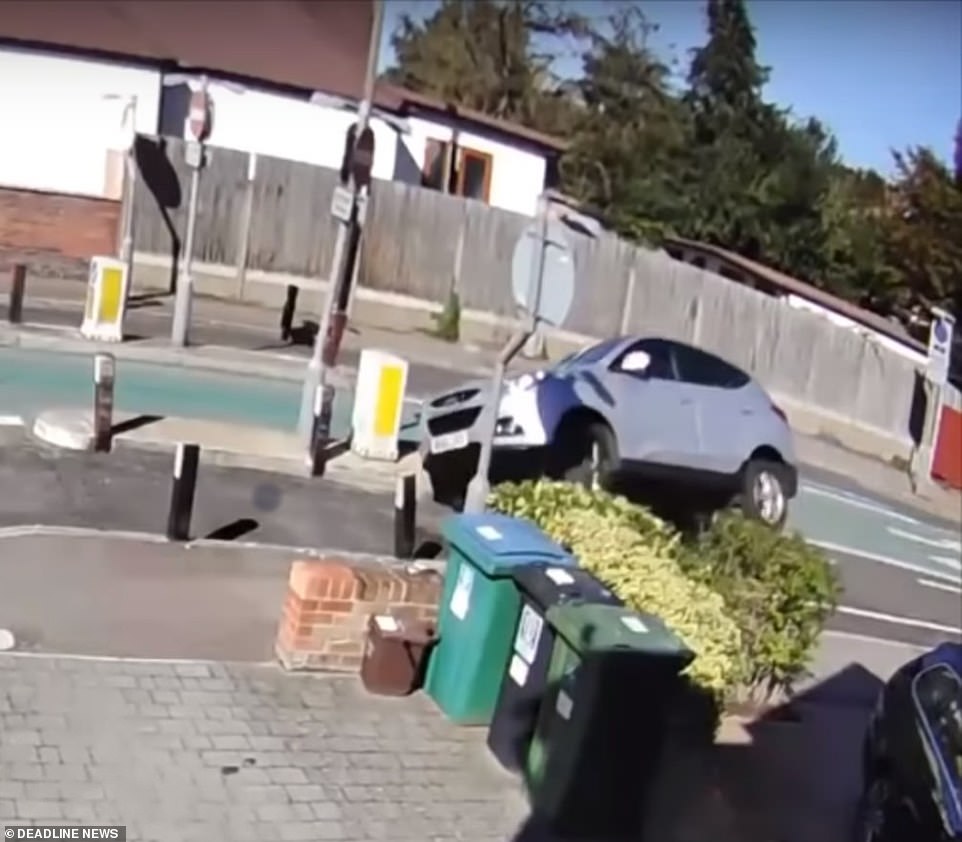 Some vehicles approach the narrow lane at speed while some crawl through – yet all end up in the same situation, as they mount the kerb on the passenger side and are stopped in their tracks by the bollard 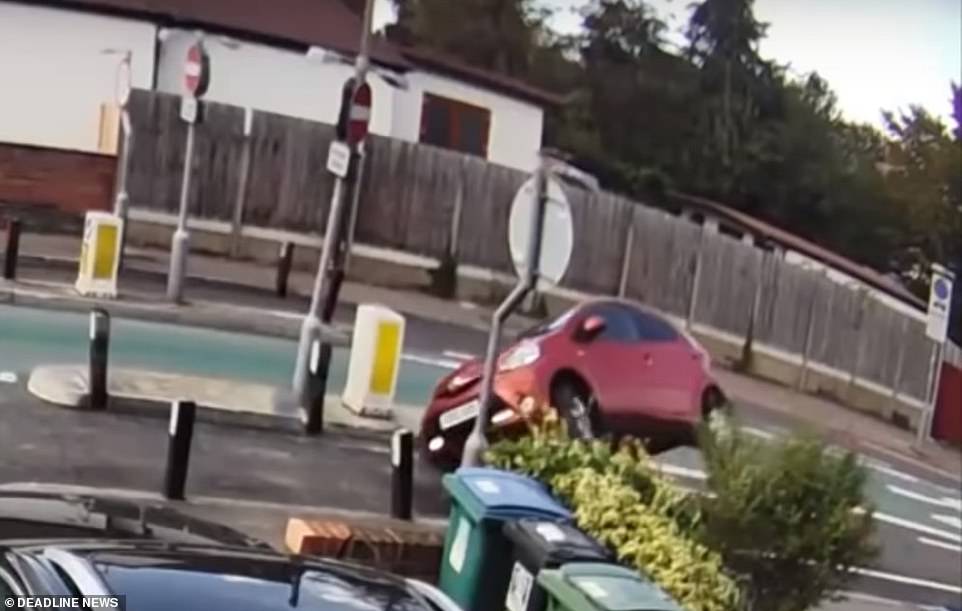 The area was visited by Hertfordshire County councillor Stephen Cavinder and Dave Swan from the council’s highways department on September 21.

A spokesperson for Hertfordshire County Council said: ‘The width restrictions on Woodmere Avenue are there to discourage drivers, particularly of large and heavy vehicles, from using this residential road as a through route, while allowing buses to use the road as normal.

‘We are aware that some local residents have been unhappy with the width restriction, and we have reviewed and improved the white lines and signage around the restriction to make sure drivers are well aware of the upcoming width restriction.

‘There are also two other routes in to Woodmere Avenue, without width restrictions, for vehicles which are too wide or for drivers who choose not to go through the width restriction for whatever reason.

‘The location does not meet the criteria for inclusion in our safety engineering programme, and drivers do have to take responsibility for knowing the width of their vehicle and navigating the restriction at a safe speed.

‘Officers continue to liaise with stakeholders to consider options and the reported issues at this location.’

Mr Vigor added: ‘It’s absolutely ridiculous. I started recording it because there were five accidents in three days – five big ones.

‘Every day there’s something out on my driveway because every day, something hits it.

‘A van went through and scratched the wheel arch but I bet that’s still £100-£150 worth of damage. There’s about ten of those every single day.

‘No one stops because it’s just a scratch, but even if it did £500 worth of damage every single day – not including the big crashes and the cars that are written off – over ten years that’s about £1.3million in just little incidents.’