Not everyone needs to get an annual Covid booster, the head of pharma giant Moderna has admitted.

The company’s CEO Stéphane Bancel said his shots are mainly targeted at over-50s and people with underlying health conditions.

His comments seem to be at odds with the Centers for Disease Prevention and Control (CDC) which is urging everyone over the age of five to get boosted.

The virus is now predominantly only killing the most vulnerable because the US has built up strong immunity through high infection rates and repeated vaccine rollouts.

Mr Bancel told a finance conference on Monday: ‘I think it’s going to be like the flu. If you’re a 25-year-old, do you need an annual booster every year if you’re healthy? 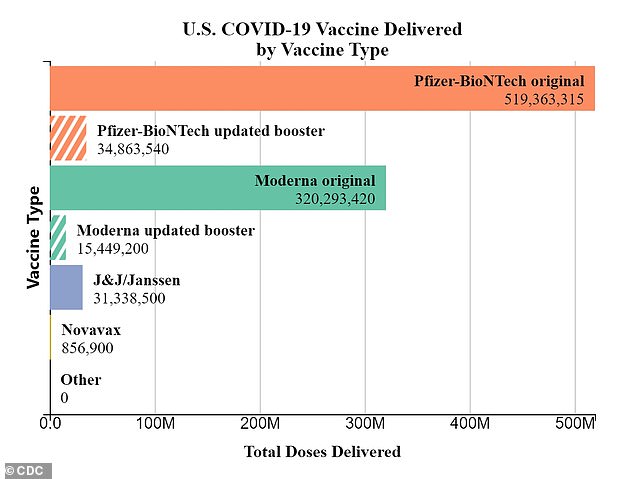 The updated booster jabs have not taken off, with only 14.8million Americans having now received the bivalent shot, out of 215million eligible 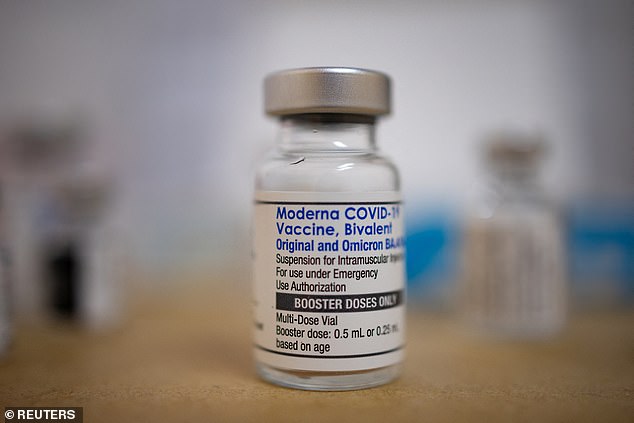 But Mr Bancel said it is only really the clinically vulnerable who need Covid booster shots, and so it is up to the younger generation whether or not they get one

Despite there being no appetite for the jabs, the CDC last week approved Moderna’s updated bivalent Covid shot for use as a booster in children aged six and older, while Pfizer’s was approved for children aged five and above.

Roughly 14.8million Americans have now received the updated booster, out of 215million eligible.

Pfizer recently joined forces with Marvel for a PR campaign specifically targeted at children to encourage them to get the booster shot.

But Mr Bancel said it was ‘very important to think about’ whether or not to get Covid boosters.

He said there are around ‘1.5billion people’ globally who would fall into the vulnerable category he thinks still need Covid boosters, but emphasized that younger people ‘are going to have to decide for themselves what they want to do’.

He noted that it is the first time people are getting the booster in more of an endemic than pandemic setting, meaning people are less anxious to get a new vaccine.

Beware of the ‘twindemic this winter’

Americans should brace for a ‘severe’ flu outbreak this winter, one of the country’s top doctors has warned.

Dr Rochelle Walensky, director of the Centers for Disease Control and Prevention (CDC), said the country was ‘ripe’ for a resurgence because it has low levels of immunity.

Influenza has been largely sidelined during the pandemic due to lockdowns and social restrictions, leaving Americans with little protection against the seasonal bug.

But there are signs the flu is making a comeback as latest data shows cases have quadrupled in recent weeks — months before the virus normally strikes.

Flu season typically runs from late October to May, picking up in December and peaking in February.

But the southern hemisphere – which is normally a precursor for the US – suffered an early and brutal wave during its winter earlier in the year.

There are also concerns about flu vaccine uptake, with just 12million Americans having received the shot so far.

Dr Walensky told NBC News: ‘We’ve noted that flu activity is starting to increase across much of the country.

‘Not everybody got flu vaccinated last year, and many people did not get the flu. So that makes us ripe to have potentially a severe flu season.’

‘You might do it to protect other people or because you don’t want to get sick and miss work, or miss vacation.’

But he has been getting the annual flu shot since the age of 30, he said.

‘Is it because I was worried of being hospitalized? Of course not. I just didn’t want to be sick, I wanted to be able to work.’

The Covid booster shots can protect against Omicron subvariants BA.4 and BA.5.

All over-sixes who have received at least the first two doses of the Covid vaccine are eligible.

Less than half of the US population (46 per cent) over the age of 65 have received a second booster dose, and only 39 per cent under the age of 50.

Controversy was sparked over the Covid vaccine drive when the Food and Drug Administration (FDA) extended eligibility to children who are six months old.

Many experts cautioned against the move at the time, saying children face a very low risk from the virus and warned it could interfere with other inoculations they need such as against polio or measles.

There is also now a prevailing sense that the Covid pandemic has come to an end, after President Joe Biden declared it was over on television last month.

He has since attempted to walk back from his words, but many are still under the impression that Covid no longer poses a threat.

The US launches a flu and Covid booster program every year in the hope of easing pressure on hospitals during the winter months.

It comes after an autumn Covid resurgence in the UK began to fuel concerns that the US could be on course for another wave.

Covid cases, hospitalizations and deaths have been trending downwards in America for months after the last wave peaked in August.

But an uptick in the UK has been blamed on new Omicron subvariants that are feared to be more resistant to immunity than their predecessors.