The mother of a miracle baby who was born with a rare cancer had to make a heartbreaking decision to keep her tiny newborn alive.

Penrith mother-of-two Natasha Lucas knew something was wrong when she felt her 36-week old go ‘silent’ inside her on a warm November day last year.

The worried young mum endured a battery of tests that all came back negative, but her gut instinct made her demand an emergency C-section.

Little Ashton was born at the Nepean Hospital in Penrith in Sydney’s west on November 17, a day Natasha and her husband Nathan will never forget.

Baby Ashton (pictured) was born swollen and bruised in Penrith’s Nepean Hospital on November 17 last year, much to the concern of his parents and attending doctors 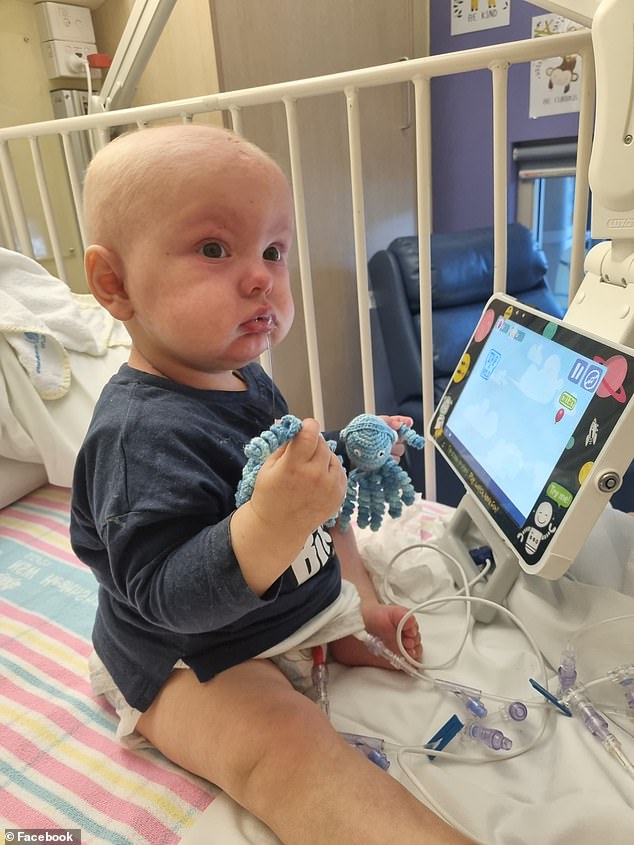 The little boy (pictured) was later diagnosed with congenital acute myeloid leukaemia, a rare and aggressive form of cancer that only affects one on five million babies

The infant entered the world swollen and covered in bruises, quickly prompting sympathetic looks from doctors and nurses attending the delivery.

‘I couldn’t see out of the curtain. But one thing I knew… it was quiet. Very quiet. Ashton hadn’t cried,’ Natasha told 7Life.

However, tests revealed the little boy was riddled with cancerous tumours, later to be diagnosed with congenital acute myeloid leukaemia.

The rare disease only affects one in five million babies and can be treated with chemotherapy, an impossible decision left in the hands of Ashton’s parents.

Natasha said when she first laid eyes on her second-born son he was bruised and swaddled with tubes in the neonatal intensive care unit. 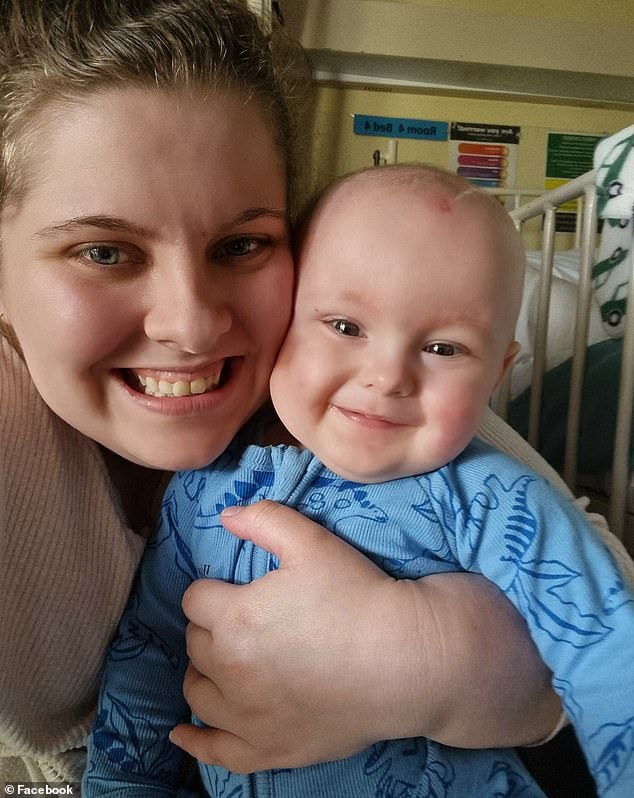 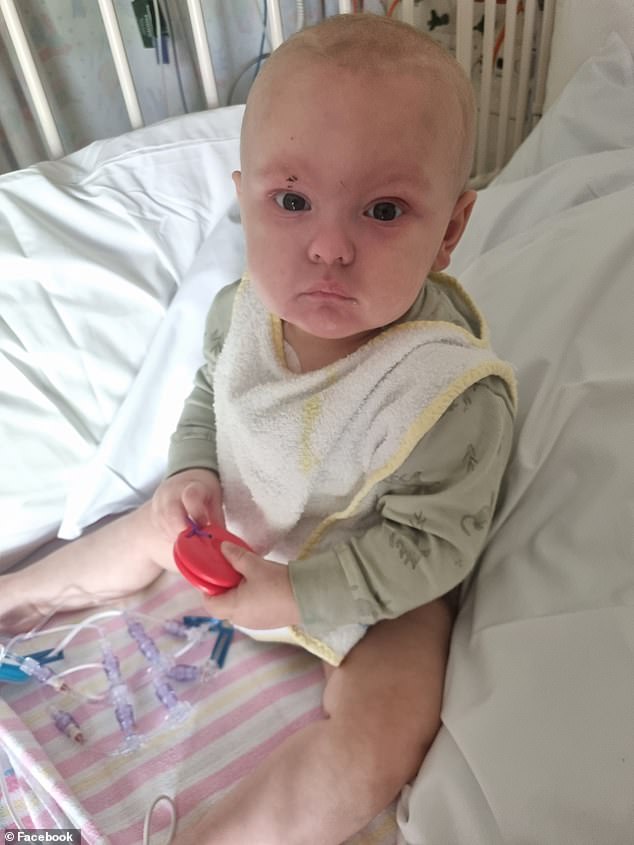 She and her husband were in disbelief their precious baby could be suffering from such an aggressive disease and struggled to decide his fate.

Doctors told them newborns rarely survive the first round of chemotherapy due to toxicity poisoning, leaving the young parents reeling.

At just five days old Ashton was transferred to Westmead’s Children Hospital to start chemotherapy to treat the rare leukaemia.

His mother said she struggled to be close to her baby during the treatments and even began to prepare for his funeral.

‘I didn’t want to get too attached to my son in case something did happen,’ she said. 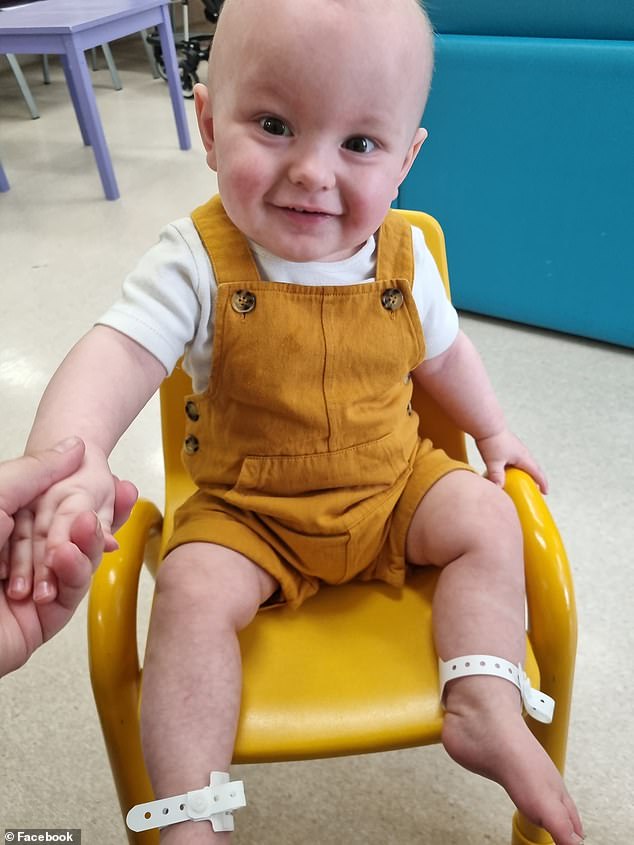 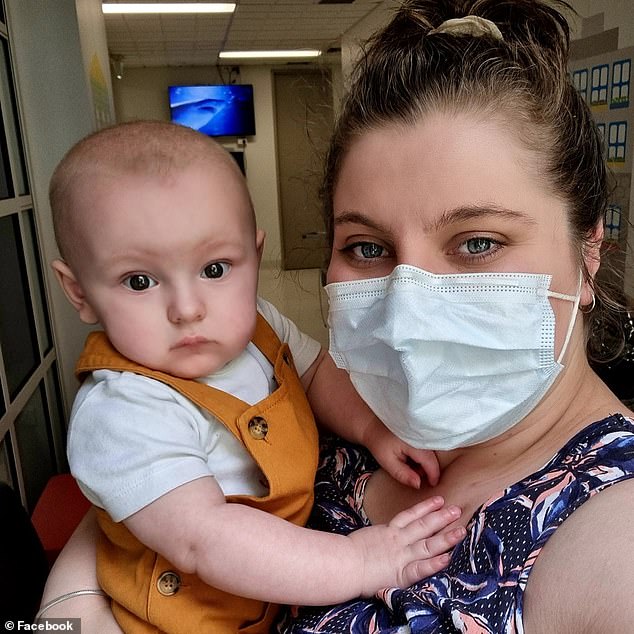 The young mum (right) saw a glimmer of hope when just a few days after the first round of chemotherapy treatments, Ashton opened his eyes and gazed into hers

The young mum saw a glimmer of hope when just a few days after the first round of treatment, Ashton opened his eyes and gazed into hers.

The future now seeming a little brighter, Natasha channeled all her energy into her son’s recovery – which is miraculously coming on in leaps and bounds.

On Facebook page gives regular updates on the baby’s health for friends, family and supporters.

A photo of mother and son uploaded on Tuesday is captioned:  ‘I am on the mend!

‘My smiley face is back and I’m bouncing around in my cot again! My white cell count is at 0.5 and my neutrophils are at 0.2.

‘The doctors have advised they are extremely happy with my progress and doing better than expected at present.’ 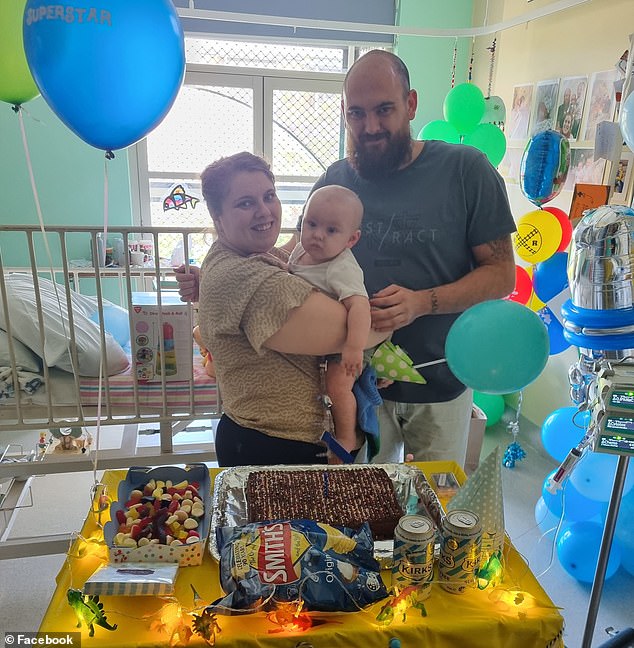 Ashton’s parents hope the little boy will be released from hospital next February and recently celebrated his first birthday with balloons, gifts and cake 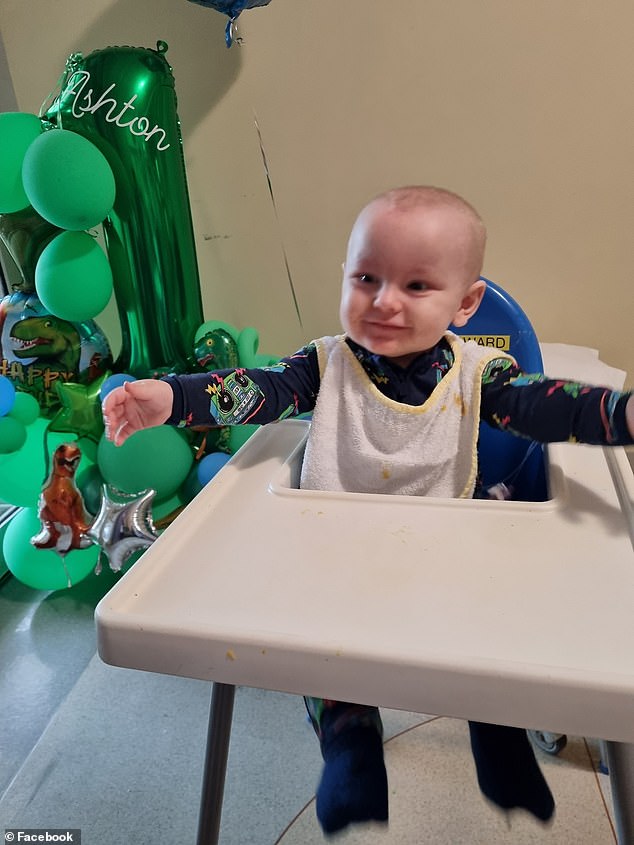 Ashton has been fighting the aggressive cancer for more than a year and has finished chemotherapy and recently received a bone marrow transplant.

Ashton has been fighting the aggressive cancer for more than a year and has finished chemotherapy and recently received a bone marrow transplant.

While the results of the procedure are yet to become clear, his relieved parents are thrilled with their little boy’s progress.

They hope Ashton will be released from hospital next February and recently celebrated his first birthday with balloons, gifts and cake.

‘For someone who has had intense treatment and a s**t start to life, he is so bubbly and happy,’ Natasha said.

A GoFundMe page has raised nearly $15,000 for the young family which will be used to ease the financial burden caused by Ashton’s disease.

What is Acute Myeloid Leukaemia?

AML is a type of cancer that affects the blood and bone marrow.

It is characterised by an overproduction of immature white blood cells, called leukaemic blasts.

These cells crowd the bone marrow, preventing it from making normal blood cells. They can also spill into the bloodstream and circulate around the body.

The low amount of red cells and platelets being made by the bone marrow can cause anaemia, easy bleeding, and/or bruising.

Around 50 children (0-14 years) are diagnosed with AML in Australia each year with the disease occuring more frequently in men than women.

Symptoms parents should watch for include pallor, lethargy, fever, easy bruising, pain in the bones or joints, swollen glands and/or weight loss.

The rare disease impacts just one in five million births.