Woman, 28, is gunned down outside her work a day after she texted a co-worker telling him she didn’t want him to touch her after ‘repeatedly’ rejecting his relentless romantic advances

By Christian Oliver For Mailonline

A woman who had repeatedly rejected romantic advances made by her co-worker has been shot dead by the man outside the workplace, police said.

Nicole Hammond, 28, was shot in the neck with a handgun by co-worker Jordan Carpenter on October 24, police said. The incident happened at around 7am in the parking lot of Dubow Textile in St. Cloud, Minnesota.

Police arrived shortly after and found the 28-year-old’s body ‘laying in the parking lot with a gunshot wound’. Police said they attempted life saving measures on Ms Hammond, but she died at the scene.

Nicole Hammond, 28, was allegedly shot and killed by her co-worker Jordan Carpenter, 36, in St. Cloud, Minnesota

Carpenter was then taken into custody to be questioned by police and arrested on second-degree murder charges.

The alleged killer did not admit to gunning down Ms Hammond, according to a probable cause statement obtained by the Kansas City Star. However, he did say he was walking toward Ms Hammond’s car when the gun sounded.

Carpenter told police that he ran away because he ‘was too traumatized’ after seeing Ms Hammond’s body.

Ms Hammond had repeatedly told Carpenter that she was not interested in a romantic relationship with him. 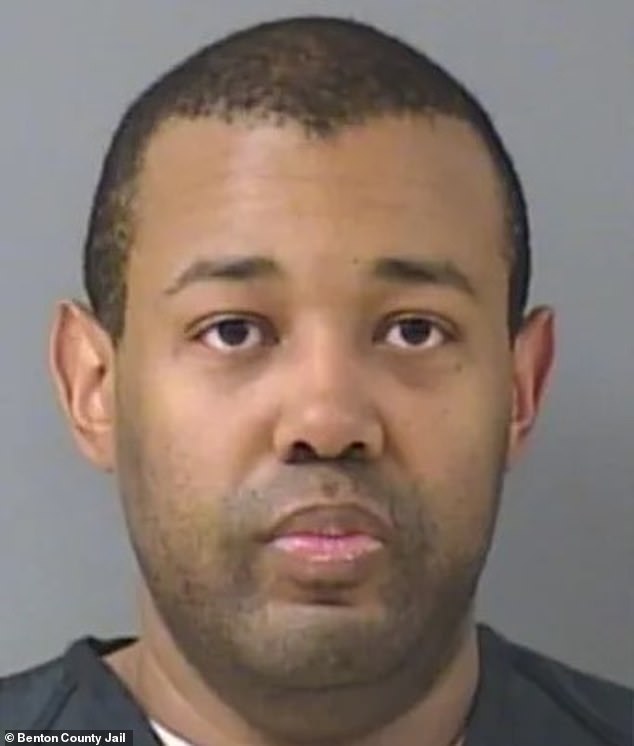 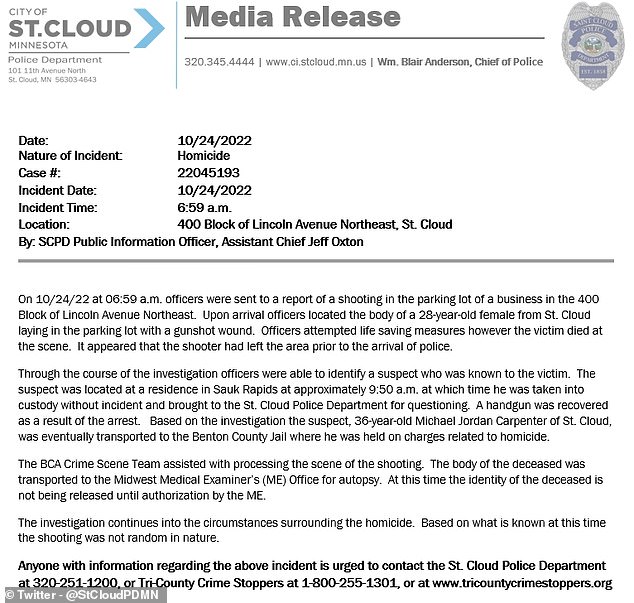 The media release issues by St. Cloud police says that Jordan Carpenter was arrested and transported to Benton County Jail where he is held on charges related to homicide

A probable cause statement showed that Ms Hammond had rejected Carpenter’s advances by text message the night before. Ms Carpenter told him that ‘she did not want to be touched or manipulated by him’ and asked him ‘not to make things uncomfortable at work,’ the police statement said. She had ‘repeatedly’ rejected his advances over the previous month.

Police also said that they found a text send by Ms Hammond telling a friend that Carpenter was mad at her.

Co-workers of Ms Hammond told the Kansas City Star that Carpenter had repeatedly harassed her and had a ‘bad temper’.

However, the CEO of Dubow Textile, Rob Dubow, told Fox that this was never reported to management.

Mr Dubow told Fox: ‘Unfortunately, we had no idea. Any time there is anything that requires out intervention we step in. But in this case, we had no indication that there was anything awry.’ 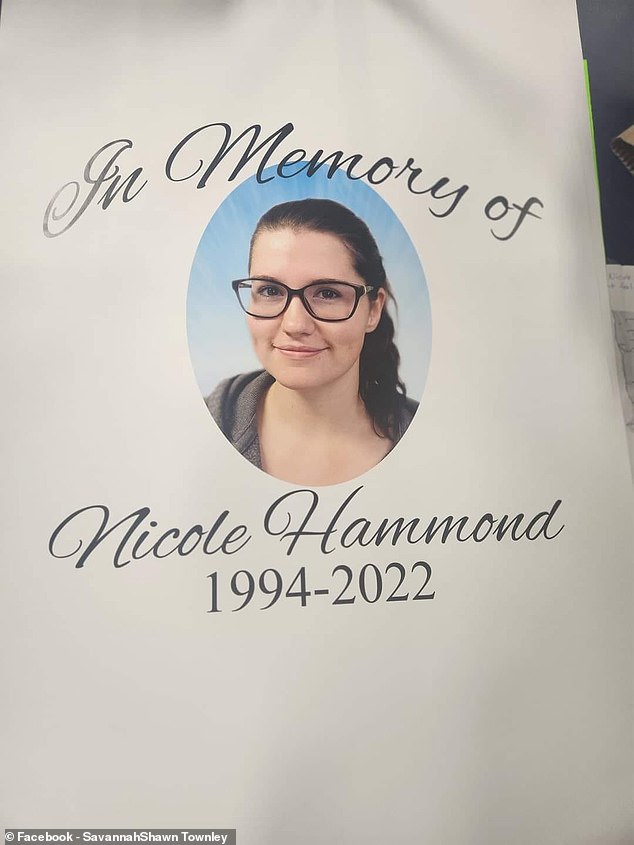 Nicole Hammond was shot and killed outside her workplace in St. Cloud Minnesota 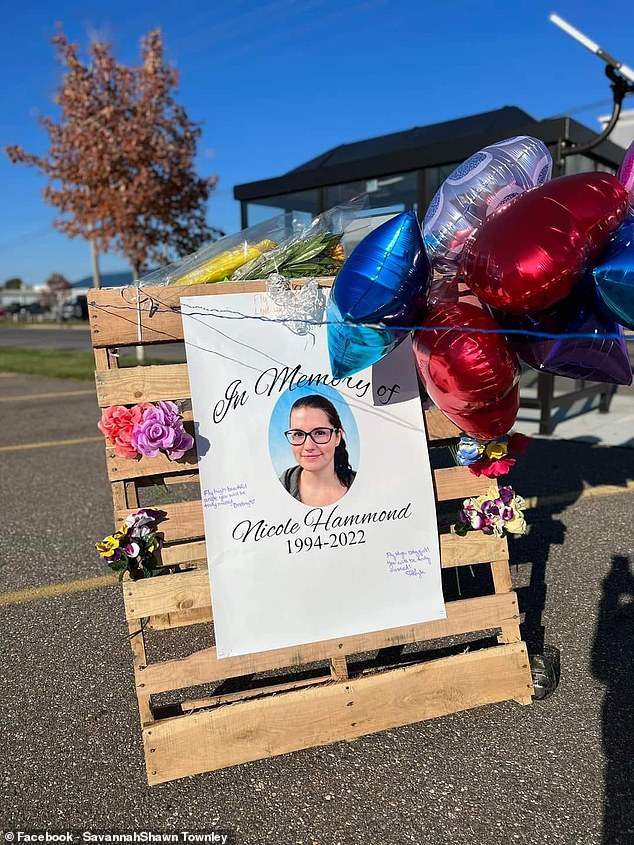 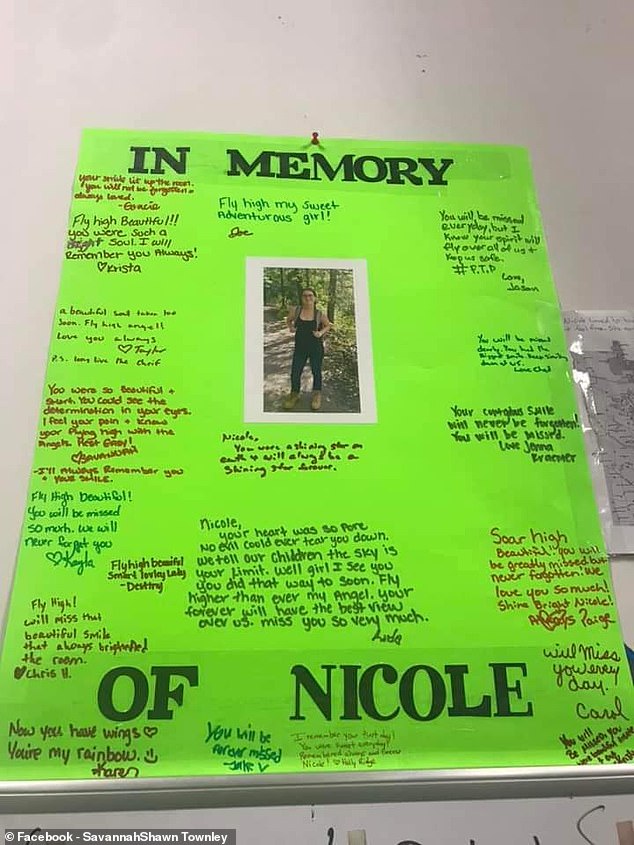 Ms Hammond’s obituary said he had one day hoped to own her own jewelry business. In her spare time, she loved photography and kayaking.

In a tribute posted to her Facebook page, Ms Townley said: ‘You deserved to live your best life but instead got your life taken from you. Even though we were not close outside of work, you were one of the best employees anyone could ask for. Our team is forever broken without you. Fly High Angel!