Ministers swiped at Dominic Cummings today as the government desperately tried to draw a line under the extraordinary coup in Downing Street.

He also jibed that building relationships and alliances was not the ‘forte’ of the notoriously intense Mr Cummings.

The brutal assessment came as Boris Johnson launches a charm offensive on Tory MPs, bidding to ‘reset’ his premiership amid rising chatter that he himself could be on the way out. Senior MPs believe Rishi Sunak is ‘agitating like fury’ to take over if Mr Johnson cannot recover his standing.

But there are fears that Mr Cummings will not go quietly, with reports he has taken to answering questions about his plans by taking a pin out of an imaginary hand grenade and throwing it over his shoulder.

The briefing war rocked Downing Street to its foundations after long-term tensions erupted publicly over the past week, with the PM’s fiancee Carrie Symonds and new press secretary Allegra Stratton apparently joining forces to oust the Vote Leave cabal headed by Mr Cummings.

In interviews this morning, Mr Eustice said Mr Cummings ‘tends to apply himself in short bursts’, saying Mr Johnson was entitled to decide who was in his team.

He told Sky News: ‘I’ve known Dominic Cummings myself for many years. He’s got many great strengths and one of them is winning campaigns.

‘And he tends to apply himself in short bursts, short tours of duty, on big strategic changes such as the 2016 referendum result, such as the 2019 general election.

‘And he’s very talented at that. But it’s always the Prime Minister’s prerogative who will be their key advisors.’ 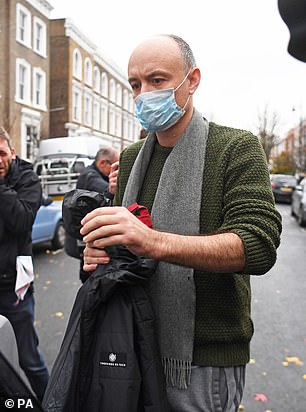 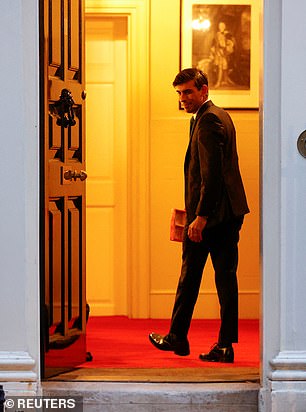 There are fears that Dominic Cummings (left) will mount an all-out attack on the PM rather than ‘going quietly’. MPs believe Rishi Sunak, pictured in No11 last night, is ‘agitating like fury’ for the top job 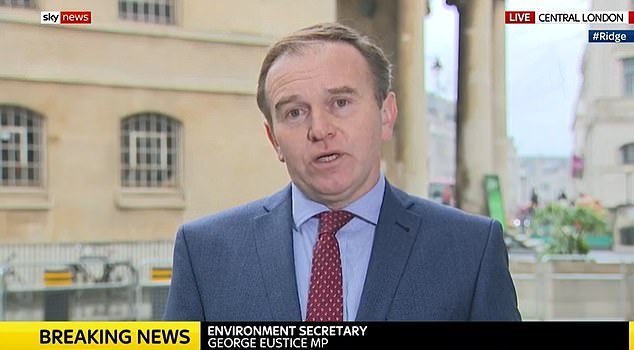 Speaking to Times Radio, Mr Eustice added: ‘It’s also the case – and this is no secret – that when you’re in more steady-state times and you need to build alliances, build relations with others, well that’s less Dominic’s forte and I think he would say that himself.

‘Dominic Cummings is a force of nature. He will do his own thing, I’m sure. But look, as far as we’re concerned, there’s obviously been an episode.’

In a reference to the famously lengthy and detailed blog Mr Cummings kept while outside of government, Mr Eustice said: ‘He’s chosen to leave. I’ve no reason to suspect he’ll be writing a blog.’

There were claims today that the PM’s fiancee held a ‘victory party’ upstairs in the No11 flat after the departure of the two Vote Leave aides.

But allies of the pair have warned that Mr Johnson’s time in power is running out, with Rishi Sunak waiting in the wings, and there are fears that Mr Cummings will mount an all-out attack rather than ‘going quietly’.

Many senior Tories do not believe the ‘knackered’ PM will fight the next election, amid a backlash at the handling of the coronavirus crisis, and a slew of clumsy U-turns on issues such as free school meals during the holidays.

The Chancellor is said to be pushing for the top job, with warnings he cannot afford to stay at the Treasury too long with a brutal reckoning looming on the public finances due to the pandemic.

The PM is planning to set up a new ‘policy board’ as he scrambles to reconnect with increasingly mutinous Tory MPs.

He will offer more support to backbenchers in the ‘Red Wall’ northern ex-Labour seats that delivered his historic election victory less than a year ago – and vow to make more progress on his ‘levelling up’ agenda.

Mr Johnson is also due to lay out a new environment strategy, as he seeks to ‘soften’ the government’s image, despite resistance from Mr Sunak’s Treasury at the prospect of huge spending commitments.

According to the Sunday Times, the ‘policy board’ will gather ideas to appeal to northern working class voters who helped Mr Johnson win last year’s general election.

The group is expected to be chaired by the MP Neil O’Brien, who helped former chancellor George Osborne devise the Northern Powerhouse.

Mr Johnson will meet the Northern Research Group of MPs tomorrow to listen to their concerns.

The former Vote Leave chief dramatically carried his belongings out the front door of No10 in a cardboard box, following a final meeting in which Mr Johnson is said to have rebuked the two aides for describing Ms Symonds as ‘Princess Nut Nut’ – something else which is denied by No 10.

Other nicknames for Ms Symonds previously circulating among the Brexit clique include ‘Cersei’, a reference to the scheming Game of Thrones character.

Ms Symonds’ friends deny that there was a ‘boisterous celebration’ in No11 – the latest in a vicious cycle of claim, denial and counter-claim by the warring factions.

Carrie’s friends deny that there was a ‘boisterous celebration’ in the No11 flat after Mr Cummings and Lee Cain departed last week. Pictured: Mr Johnson and his fiancee in March

The tensions reached boiling point after wrangling over whether Mr Cain should be promoted from director of communications to the key job as No10 chief of staff.

He is believed to have demanded the role to shore up his authority after Allegra Stratton was appointed the PM’s press secretary against his wishes. She will be taking televised, West Wing style press conferences from the New Year.

Writing in the Sunday Telegraph, Mr O’Brien said next year would be an opportunity for the government to ‘turn the page’.

He said the ‘first priority must be doing everything we can to get growth going and unemployment down’.

‘That means questioning everything across government: is the tax system doing everything it can to encourage investment and innovation? Are regulations governing insurance firms and pensions holding back productive investments? How do we change government spending in ways that support business growth – for example, supporting business R&D?’ he wrote.

He also delivered a stark warning on the threat of Scottish independence, with Nicola Sturgeon pushing for a fresh referendum.

‘Breaking up Britain would mean years of paralysis as we argued over currencies, pensions, debts, and state assets,’ Mr O’Brien said.

‘The whole of government needs to be swung behind a coordinated campaign to win hearts and minds and show the benefits of working together.’

In a nod to unrest among the Tory ‘Red Wall’ MPs, Mr O’Brien said: ‘We need make 2021 the year people begin to feel the benefits of the PM’s ‘levelling up’ agenda.’