Emergency laws to tackle coronavirus are being rushed in after the outbreak claimed its first British life yesterday.

The measures will be announced next week to ensure public services and the transport network can keep operating if the crisis worsens.

The unnamed British victim died in Japan after contracting the virus on the Diamond Princess cruise ship. He was one of 78 UK citizens on the vessel moored in Yokohama. 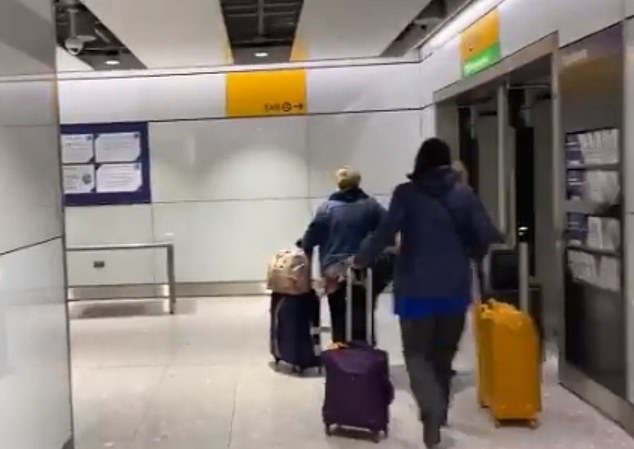 Two picked up the virus in Iran and one in Italy. The fourth patient, who is being treated in London, is the first case of transmission within Britain’s borders.

Chris Whitty, England’s chief medical officer, said last night: ‘The virus was passed on in the UK. It is not yet clear whether they contracted it directly or indirectly from an individual who had recently returned from abroad. This is being investigated and contact tracing has begun.’

The new laws will include the ability to suspend maximum class sizes to allow teachers to take on pupils when colleagues are off sick. Lessons could take place outside schools. 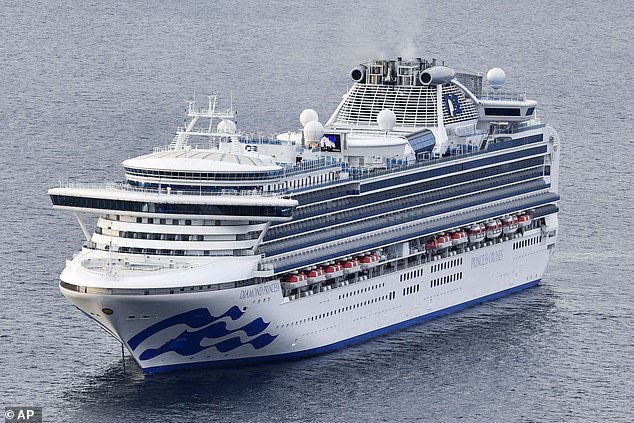 The first British death from coronavirus was announced on Friday. The unnamed victim died in Japan after contracting the virus on the Diamond Princess cruise ship (pictured). He was one of 78 UK citizens on the vessel moored in Yokohama 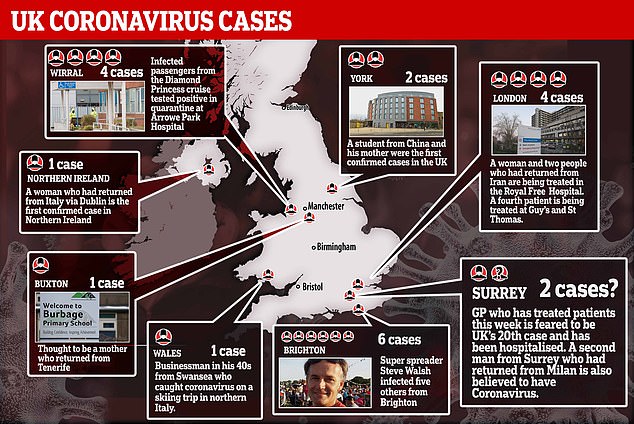 The UK’s 20th coronavirus patient has been confirmed, marking the first case to have caught the infection on British soil

As the crisis showed no sign of slowing last night:

Mr Johnson last night took personal charge of Britain’s response to the crisis, as critics urged him to ‘get a grip’. He convened a meeting in No 10 last night to discuss contingency plans and will chair a meeting of the Government’s emergency Cobra committee on Monday.

In his first significant public statement on the crisis, the Prime Minister said: ‘The issue of coronavirus is something that is now the Government’s top priority.

‘People are right to be concerned and they are right to want to take every possible precaution, and we will in the course of the next few days be issuing further advice about how to respond and how we will deal with any potential outbreak.’ 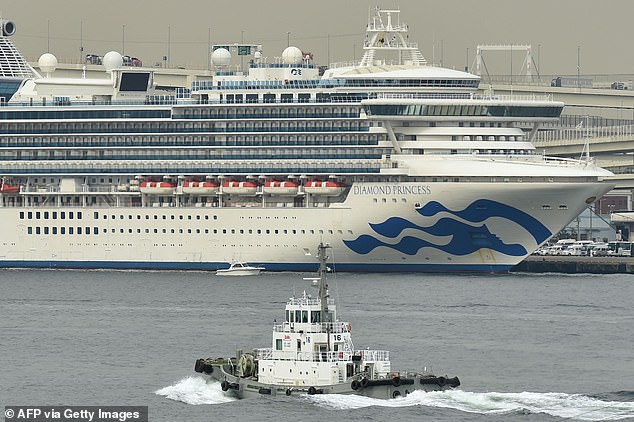 A British man who was on board the Diamond Princess cruise ship (pictured in Yokohama) has died after being infected with coronavirus, Japanese authorities confirmed today 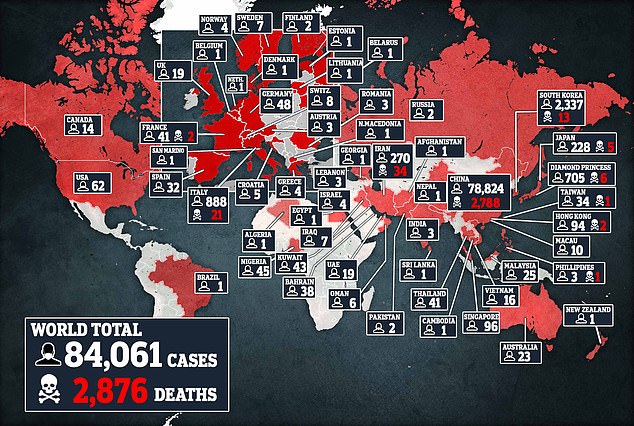 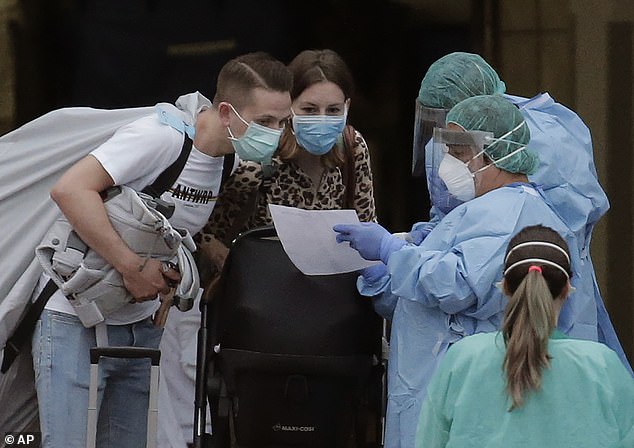 Health professionals are seen helping guests as they leave their hotel in Tenerife after it was put on lockdown. The British holidaymakers staying at the hotel are still in quarantine there

He added: ‘The most valuable thing we can all do to prevent the spread of the coronavirus is to wash our hands for 20 seconds or more with hot water and soap. That’s the best single piece of advice we can give.’

Mr Johnson’s intervention follows criticism of his decision to delegate the issue.

He is said to have been stung by Labour’s description of him as a ‘part-time’ PM. Former Tory chancellor George Osborne called on him to put the Government on a ‘war footing’ to show he has ‘got a grip’.

The emergency legislation is designed to give ‘flexibility’ across various sectors to keep services going in the event of large-scale staff absences.

Chancellor Rishi Sunak yesterday held talks with Bank of England Governor Mark Carney and his successor Andrew Bailey about the potential impact on the economy.

Health authorities ordered a 14-day quarantine for all on board the Diamond Princess, which had 3,711 passengers and crew on February 5. 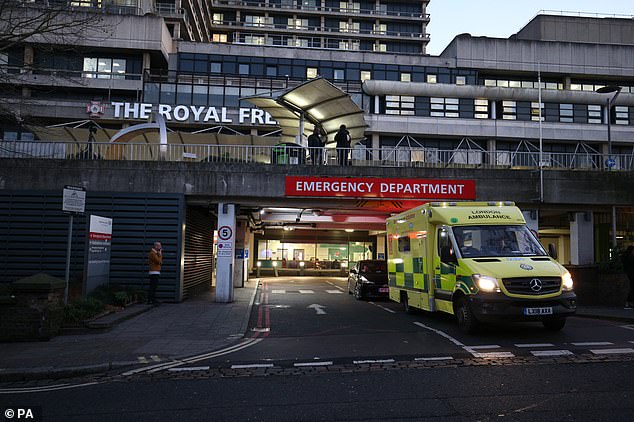 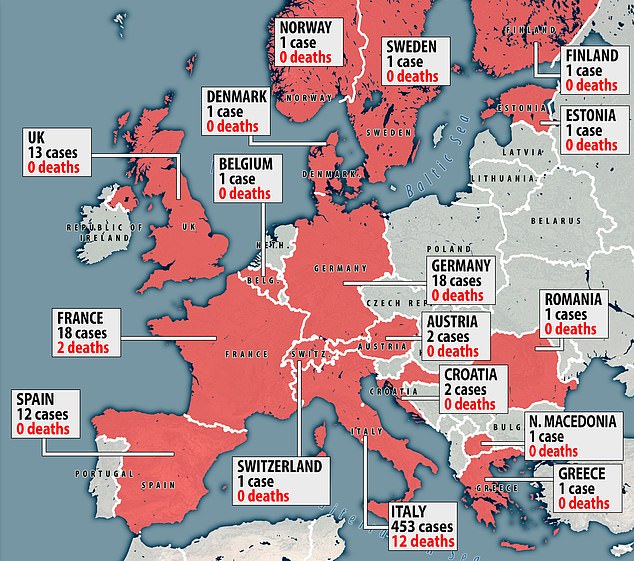 More than 800 cases of the killer coronavirus have now been recorded across Europe, with 655 of them in Italy – which has locked down 11 towns in an attempt to contain the crisis

But that quarantine failed and 705 people were infected with the virus – two thirds of them over the age of 70. Six are thought to be British.

After desperate appeals from the passengers, the UK Government last weekend arranged a repatriation flight, and 32 British and European passengers are now in isolation in Merseyside.

A small number were not repatriated because they had already been diagnosed with coronavirus and were receiving treatment.

Another four were subsequently diagnosed with coronavirus and are receiving treatment in NHS hospitals.

The UK fatality, who is thought to be an expat, is understood to have been taken to hospital in Japan at least four days before the flight.

A Foreign Office spokesman said: ‘We are supporting the family of a British man who has died in Japan and are in contact with local authorities.

‘Our sympathies and thoughts are with his family.’

So why are passengers flying in from Italy with no health checks?

Travellers have questioned why air passengers are being allowed to land in Britain from the coronavirus-hit part of Italy without any health screening.

A reporter shared posts of himself and other passengers strolling through Heathrow’s arrivals after flying from Milan – the closest city to the quarantine zone in northern Italy.

Italy is now the worst-affected country in Europe, with 888 cases of coronavirus and 21 deaths confirmed last night.

The Foreign Office advises anyone returning from the affected parts of Italy to self-isolate at home if they start to feel ill. The Government does not know how many holidaymakers have come back from skiing trips in the north of Italy but has admitted it is a ‘significant number’. 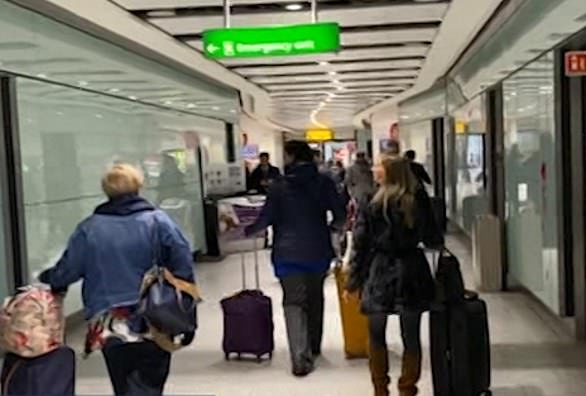 A Good Morning Britain correspondent shared video of himself and fellow passengers from Milan, the closest airport to Italy’s coronavirus crisis, passing through Heathrow without any health checks