It has been mandatory since March for secondary school pupils in England to wear coverings when social distancing is not possible, including in classes and corridors.

That is despite teenagers being at a very low risk of Covid and millions of tests being deployed in schools every week.

Public Health England documents seen by The Telegraph said officials ‘expressly did not consider any potential disbenefits of the policy’ prior to its introduction.

Campaign groups say they have received multiple reports of children suffering both mental and physical harm as a result of wearing a mask for up to eight hours a day.

UsForThem said it ‘beggars belief’ that ministers brought in the measure without ‘the usual rigour of an public health intervention’.

The group warned children’s health and education were being put in jeopardy by the policy, with a number of cases of children becoming irritable, losing concentration and suffering from facial rashes, headaches and nausea.

There is growing pressure for No10 to drop the controversial intervention, originally meant to be temporary, due to the vanishingly low Covid rates in schools. Pupils are already required to take a lateral flow test twice a week.

There is still little evidence that schools are a hotbed for the virus, with the latest PHE data showing there were just 13 clusters of respiratory infections in the week up to April 22. For comparison there were 25 in offices and workplaces, where masks are not always mandatory. 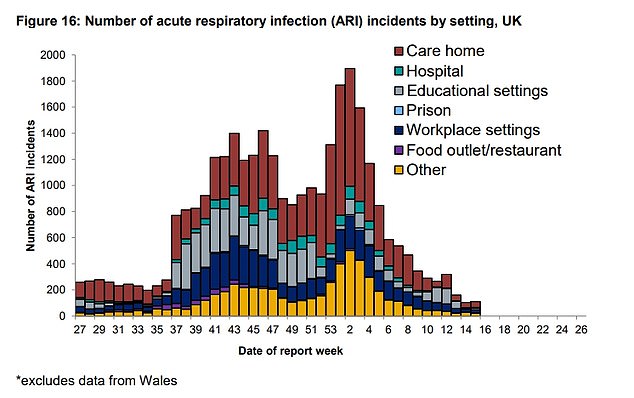 Latest PHE data showing there were just 13 clusters of respiratory infections in the week up to April 22. For comparison there were 25 in offices and workplaces, where masks are not always mandatory. The data includes all respiratory viruses and is not strictly limited to Covid, although due to social distancing measures there is very little other viral illnesses circulating

Boris Johnson announced in February that when schools went back in March, secondary pupils would need to wear masks at all times indoors when social distancing was not possible – including in classrooms and corridors.

He claimed it was only a temporary measure that would be reviewed by Easter, but that has been pushed back to May 17 at the earliest.

Primary school pupils read more challenging books during lockdown – because they were bored.

When the reading habits of more than 1.1million pupils across the UK and Ireland were analysed for the annual What Kids Are Reading report, it found reading levels increased during school closures.

During the first lockdown, Harry Potter And The Prisoner Of Azkaban by JK Rowling was primary pupils’ favourite book.

Report author Professor Keith Topping, of the University of Dundee, said: ‘During the lockdown overall, pupils were tending to read longer books of greater difficulty and with greater comprehension.

‘Having more time gave children the chance to immerse themselves in literature.

‘It is great to see that primary age children are reading more difficult books and this should be reflected at secondary school age where book difficulty this year plateaued.

But the study also found the number of books read overall fell by 17 per cent compared with the same period a year before.

Christine Brett, co-founder of the parent campaign group UsForThem, told The Telegraph: ‘It beggars belief that the Government has recommended secondary school children wear face coverings for up to eight hours a day without the usual rigour of an public health intervention imposed on a healthy population.

‘There is increasing evidence of masks being harmful to children’s health, welfare and impacting on their ability to learn, develop and communicate.’

The newspaper reports that Government lawyers, responding to a pre-action letter from UsForThem, admitted PHE did not carry out a scientific risk analysis of the masks in schools policy.

Instead, they said officials conducted a series of surveys among teachers, workers’ unions and local councils.

They suggested the intervention was popular and scrapping it could lead to a drop in attendance rates.

But last week the Education Secretary Gavin Williamson revealed the face coverings rule in classrooms could be partially lifted by May 17, as part of stage three of the roadmap out of lockdown, when pubs and restaurants are due to reopen for indoor service and foreign travel is to resume.

Even if masks are scrapped in classrooms, pupils would still expected to wear them in corridors and on school buses.

Any changes to the policy will be confirmed with one week’s notice following a review of the latest data on infection and vaccination rates, the Department for Education said.

But Mr Williamson is facing pressure from teaching unions which have urged him not to ‘rush into’ scrapping the policy.

They claim that masks are not causing disruption to learning and insist they do help in curbing the spread of the virus.

But the jury is still out on masks’ effectiveness. A Danish study last winter, one of the only real-world trials into their use, found no difference in infections rates between people who wore masks and people who didn’t.

In a letter to Mr Williamson, they said: ‘None of us wants to see pupils or staff wearing face coverings for longer than is necessary.

‘However, it is our shared view that the government should not rush into changing this policy at short notice without careful consideration of the scientific evidence surrounding the wearing of face coverings in schools.’

The unions argued that there is ‘a strong scientific consensus’ that masks ‘can and should’ be part of anti-coronavirus measures.

‘The research suggests that they cut down the chances of both transmitting and catching the coronavirus,’ the leaders said.

‘We have also seen the emergence of more recent studies that suggest that they can help to reduce transmission of the virus within schools.’