Students will be offered places based on their actual A-Level results rather than ‘unfair and inaccurate’ predicted grades, ministers confirm

The Education Secretary has announced plans to reform the university admissions system which could see students receive offers from universities only once they have their final grades.

Gavin Williamson will consider moving to a post-qualifications admissions (PQA) system in England, where applicants receive university places based on their actual exam results, to ‘remove the unfairness’ that some groups face due to inaccurate predicted grades.

The change would also put an end to the widespread use of ‘unconditional offers’, where a degree place is offered regardless of exam results, which the Department for Education (DfE) argues are not always in the best interests of students and can leave them unprepared for university study.

The announcement comes after vice-chancellors and Ucas outlined proposals to allow university places to be offered after A-level results day.

Gavin Williamson will consider moving to a post-qualifications admissions (PQA) system in England, where applicants receive university places based on their actual exam results

Universities UK (UUK), which represents vice-chancellors, has said a PQA system could be introduced by 2023/24, subject to further consultation with the sector, to reduce the reliance on predicted grades.

Nearly four in five (79%) of 18-year-olds in the UK accepted to university with at least three A-levels had their grades over-predicted, whereas 8% were under-predicted, according to data highlighted by the DfE.

The current university admissions system in England can work against high achievers from disadvantaged backgrounds whose grades are more likely to be under-predicted, the DfE has said.

Education Secretary Gavin Williamson said: ‘We should celebrate the fact that we are seeing record numbers of disadvantaged students going to university, but the current admissions system is letting down the brightest pupils from the most disadvantaged backgrounds.

‘By using predicted grades it is limiting the aspirations of students before they know what they can achieve.

‘We need to radically change a system which breeds low aspiration and unfairness. 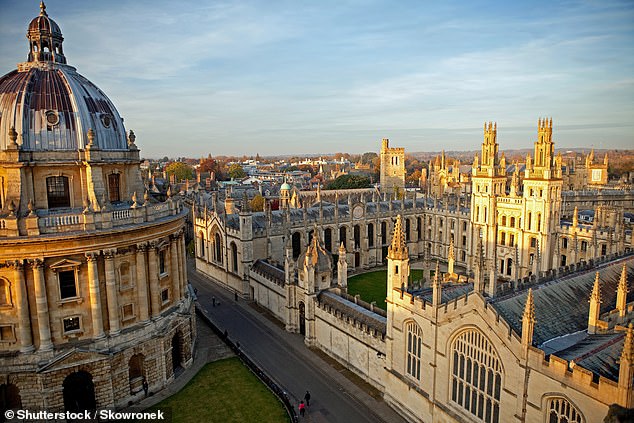 Universities UK (UUK), which represents vice-chancellors, has said a PQA system could be introduced by 2023/24, subject to further consultation with the sector. Pictured: Oxford University

‘That is why we are exploring how best to transform the admission process to one which can propel young people into the most promising opportunities for them within higher education.

‘It has been a challenging time for the education sector, but Covid-19 will not stop this Government from levelling the playing field and empowering students to have the very best opportunities to succeed.’

The Government will look to set out proposals for consultation in the coming months, inviting views from schools, colleges, and universities.

The consultation, which will not affect applications for 2021, will also review the use of personal statements as evidence suggests state school pupils are less likely to have support writing their statements.

Clare Marchant, chief executive of Ucas, said: ‘We support the Government taking a serious look at reforming the admissions timetable, which we have been doing over the last few months with universities, colleges, students, and schools.

‘There are different approaches to reform, so it’s right for any consultation to be open minded and have the aim of levelling up fairness for students.

‘Importantly, the consultation will provide an opportunity to address any unintended consequences of such major change, as well as practicalities for higher education providers.’

Lee Elliot Major, professor of social mobility, University of Exeter, said: ‘Applying to university with actual A-level grades is a reform that would enhance social mobility as it would sweep away the barriers, from poor advice to low expectations, that for too long have stymied the prospects of poorer students.’