A Government minister has today revealed almost 140,000 Britons have been vaccinated against coronavirus, in the country’s largest vaccination programme.

He said it was a ‘really good start’, and that the NHS would get faster at administering the jab as more vaccination centres open.

It comes amid claims that the roll out has been swamped by IT glitches, forcing many GPS to note down jabs on pen and paper.

Doctors attempting to record inoculations on their computers were met with a message reading ‘infrastructure issue’, leaving them unable to log the vaccinations digitally.

A Government source said yesterday that ‘no one has a f***ing clue’ how many Britons have received the jab, reports Politico, amid fury over the lack of statistics.

A GP suggested vaccination figures would likely only be published every week, as the Government is using the same system to log them as with flu inoculations.

A health official has admitted no one knows how many Britons have been vaccinated. Pictured: A patient receives the first of two injections with a dose of the Pfizer/BioNtech Covid-19 vaccine at The Hive in Harrow, normally home to Barnet FC 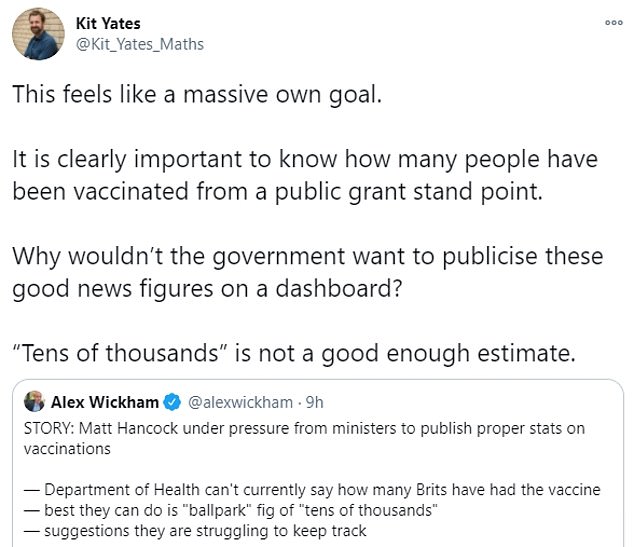 Dr Kit Yates, co-director of the Centre for Mathematical Biology at the University of Bath, said yesterday the failure to be transparent with the figures felt ‘like a massive own goal’

The NHS is recruiting people to deliver the Covid-19 vaccine who have ‘no previous healthcare experience’, a job advert has revealed.

Under the job title ‘Covid-19 vaccinator’, the advert reads: ‘Working alongside experienced teams, individuals will be full trained and supported in administering the Covid-19 vaccination.

‘No previous healthcare experience is required as full training will be delivered via a combination of remote e-learning and practical face-to-face sessions to ensure you are completely comfortable and capable with regards to the preparation and administration of a future Covid-19 vaccine.’

The advert will raise fears over non-medically trained people being asked to deliver the vaccine.

The over 80s and health care workers are first in line for the vaccine.

The Pfizer jab is currently being administered, but it is expected the Oxford jab may also be approved by regulators in the coming days.

Doctors using the Pinnacle IT system, a mainstay in many GP surgeries, were met with an error message meaning they were unable to record which patients had received the vaccine, reports the i.

Some surgeries are also still awaiting training on the system and fridges in which to store the vaccine, which must be kept at room temperature and used within three and a half days of being thawed.

Dr Helen Salisbury, a GP in Oxford, told the newspaper her surgery had been forced to delay vaccinations to Thursday because of a lack of training and fridges for storing the vaccine.

‘We haven’t been shown how to use Pinnacle and a lot of colleagues have said the system has already crashed,’ she said.

‘We don’t have the bar scanners we need to enter who’s had the first doses on the system either. We also don’t have the fridges to keep the vaccine in that we were told we’d be getting.’

She said they have been told the delays are due to ‘unforeseen circumstances’.

There is mounting fury over the Government’s failure to release figures on how many people have received the potentially life saving Pfizer vaccine.

Explaining it could be due to how the flu vaccination system works, a GP told Politico: ‘That dumps data into the medical record (using the Mesh system).

‘So, GP records will be updated overnight, and national flu data is collated each week (collected Sunday, and published Tuesday).’

A Department of Health spokesman insisted last night they would publish data on a ‘weekly basis’, and that this would start ‘as soon as possible’.

‘Tens of thousands of people across the UK have already been vaccinated,’ they claimed, ‘with 70 hospitals and more than 100 GP-led centres offering the jab to those most in need.

‘This is the biggest immunisation programme in our country’s history and the collection of data is crucial to our understanding of uptake, impact and future planning.’

NHS England insisted yesterday: ‘There has been an excellent start to Primary Care Network vaccinating this week. Emis (which owns Pinnacle) has confirmed that their system go-slow lasted less than 30 minutes and is fully resolved.’ 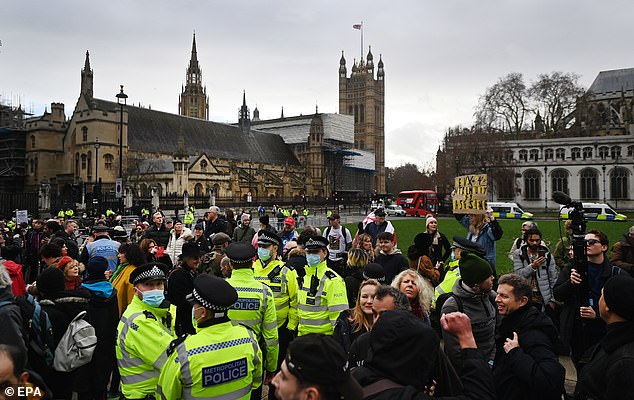 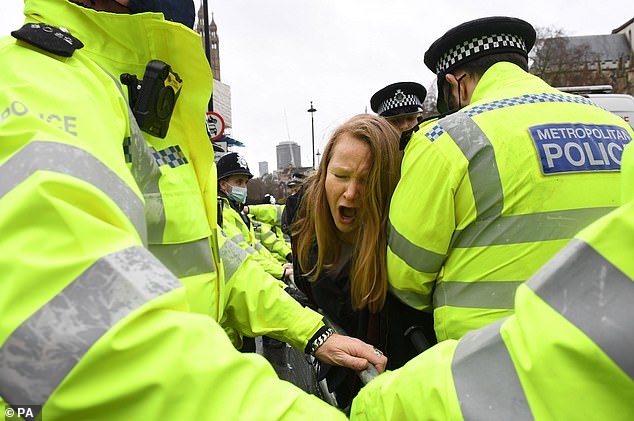 Dr Kit Yates, a mathematician at Bath University, claimed yesterday the failure to be transparent with the figures felt ‘like a massive own goal’.

He tweeted: ‘It is clearly important to know how many people have been vaccinated from a public health stand point. Why wouldn’t the Government want to publicise these good news figures on a dashboard?’

Officials were concerned about Covid vaccine uptake due to a wave of anti-vaxx conspiracy theories being peddled on social media. A number of major surveys pre-roll out suggested up to one in five Britons would refuse to take it.

Britain became the first country in the world to approve a Covid-19 vaccine for mass roll-out this month, after regulators pored over a mountain of data to confirm it was safe and effective.

The Army-backed mission to get inoculate millions of the country’s most vulnerable people kicked off on December 8, with 91-year-old grandmother Margaret Keenan becoming the first person in the world to receive the injection.

Fifty NHS hospitals were geared up to give the first batch of doses to over-80s and care home staff.  Leftover supplies — which have to be used within five days of being taken out of ultra-cold freezers and thawed — are given to frontline NHS workers.

But the scheme has already suffered hiccups, with care home residents supposed to be the first in line to get vaccinated.

The challenge of getting Pfizer/BioNTech’s jab — the only vaccine officials have approved so far — into care homes meant vulnerable residents lost their place at the top of the queue.

Currently the vaccines are only being deployed at hospitals and GP surgeries, due to logistical and regulatory problems in storing and distributing Pfizer’s jab. 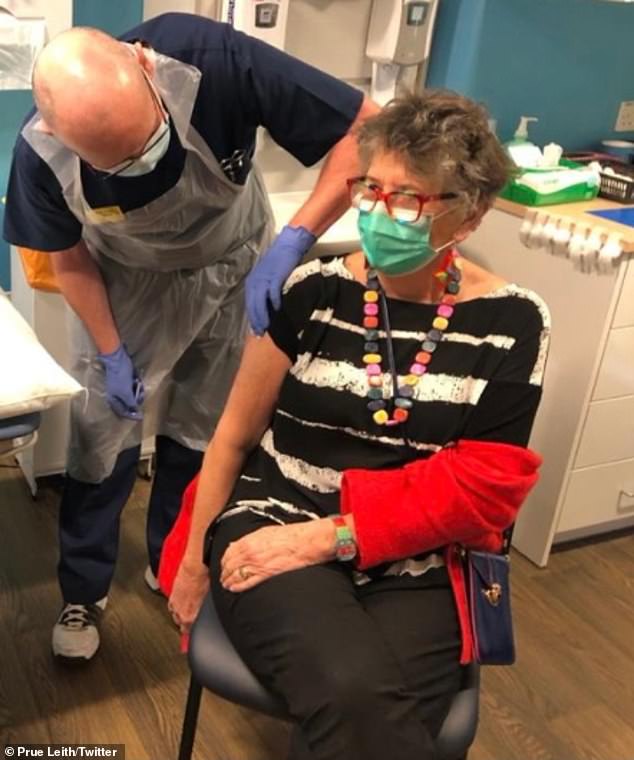 Celebrity chef Prue Leith, 80, uploaded a picture of a male nurse giving her the Pfizer/BioNTech injection this morning

Great British Bake Off judge Prue Leith has had the coronavirus vaccine ‘with a painless jab’.

The celebrity chef, 80, uploaded a picture of a male nurse giving her the Pfizer/BioNTech injection this morning.

She tweeted: ‘Who wouldn’t want immunity from #Covid19 with a painless jab?? #vaccine.’

Winner of the 9th series of the show in 2018 Dr Rahul Mandal said: ‘Yes!! You just look as gorgeous in the tent as when you are taking your jab!!’

It comes as some GP surgeries in England that were due to start rolling out Pfizer’s coronavirus vaccine yesterday were told their deliveries were delayed.

TV presenter Leith said in May she believed it was more important to save the young over the old during the pandemic.

The NHS started rolling out the biggest ever mass vaccination programme from last Tuesday.

People aged 80 in hospital or living in their own homes are the priority for the jab this week.

The vaccine has to be kept at -70C in special freezers which most care facilities do not have and medics were not currently allowed to divide the batches of 975 vials which they are shipped in.

Care staff and Brits over 80 have instead been prioritised. Elderly care home residents, who are deemed most at risk of suffering complications of the disease, won’t get it until closer to Christmas.

In Scotland, care home residents began to get the vaccine on Monday as its mass immunisation plans got off the ground this week.

And on Monday it was revealed that some GP surgeries in England who were due to start rolling out the vaccine that their deliveries would be delayed.

Health chiefs last week said that all 50 hospitals in England which received the initial batches of the vaccines were expected to give out at least 975 doses in the first week.

That would suggest at least 48,750 shots would be dished out in the first week of the operation, which Mr Hancock described as ‘the largest-scale vaccination campaign in our country’s history’.

But Department of Health chiefs were unable to confirm exactly how many Brits had been vaccinated when asked last week.

The Government agency — headed by Mr Hancock — yesterday told MailOnline it was ‘still expecting to publish regular numbers’. And officials have yet to respond to this website’s request today for further information.

It comes amid an ongoing transparency row about the way Number 10 presents its Covid data.

No10 came under fire for ‘cherry-picking’ gloomy modelling and presenting scary charts to the public to justify going into the second national lockdown.

Top experts have also complained about a lack of ‘objective criteria’ used to decide which areas warrant being put in tough lockdown Tiers.

And the failure to keep the public updated with the vaccination scheme comes amid growing anti-vaxx concerns, with protesters yesterday clashing with police in central London.

StandUp X — which arranged the march — says that ‘forced, coerced and mandated’ vaccinations will see humanity become ‘a mass science experiment profiting billions for pharmaceutical companies and their partners including Bill Gates’.

Officials have repeatedly sought to assure vaccine-hesitant members of the public that the jab is safe.

Within a fortnight of final trials of the jab wrapping up, the Medicines and Healthcare products Regulatory Agency (MHRA) gave it a good safety rating.

This process normally takes years as regulators need to wait for the full data to be published before scrutinising the findings.

But the process was condensed for Covid, with the MHRA allowed to conduct a ‘rolling review’, analysing data from Pfizer’s studies in real time.  The same review process is being used for Oxford University’s promising vaccine, which could be approved in days.

But the MHRA strongly disputed the claims. And the US has now approved the vaccine, too.