A ‘mind-reading’ brain implant has allowed an American man to communicate again, after a devastating stroke robbed him of the ability to speak.

The device works by picking up electrical signals sent by the brain to the vocal tract when the patient tries to mouth codewords.

A computer then translates these into letters, allowing words and then sentences to be projected onto a screen — at a speed of seven words per minute.

The 36-year-old patient, known only as Pancho, is the first to trial the device, which its makers hope can be rolled out more widely within a decade.

Scientists at the University of California, San Francisco, say it could be used for people with a host of other speech-robbing conditions, including cerebral palsy.

Pancho was paralyzed from the neck down at the age of 20 by a pontine stroke, a type which can cause locked-in syndrome — in which people are only able to move their eyes.

He is said to  thrilled with the device and has used it to tell them he hates the hospital food.

The above graphic shows how the ‘mind-reading’ brain implant works. In summary it reads electrical signals from the brain and translates these into letters to form words. It works at a speed of about seven words per minute, the scientists say 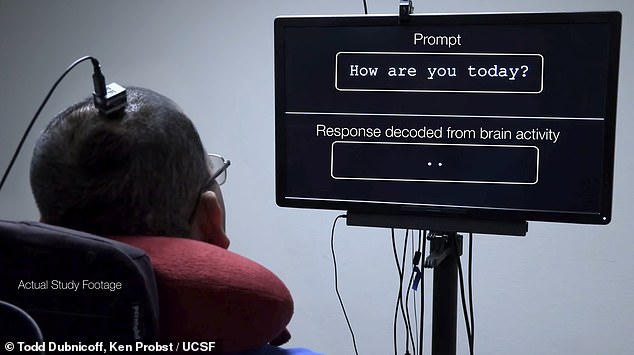 The patient known only asa Pancho (pictured) suffered a stroke when he was 20 years old that did not damage his brain but left him unable to move and speak. He is shown above with the implant in, ‘saying’ an answer to the above question using the device

What is a pontine stroke?

A pontine cerebrovascular accident is a type of stroke that that occurs on the pons region of the brain stem.

The rare strokes can be deadly or leave victims in paralysis or with locked-in syndrome — in which people are only able to move their eyes.

It can result in extensive loss of motor function and other deficits.

A patient’s exact symptoms will vary depending on the severity of the pontine stroke, as well as its specific location.

This is because cranial nerves serve different functions in different areas of the brain stem and within the pons itself.

For example, a stroke on the back of the pons may lead to ataxia, a condition characterized by the loss of muscle coordination.

After a pontine stroke, some patients also experience difficulty swallowing, speech deficits, numbness, and even paralysis of one side of the body or both.

The device — which contains 128 sensors — was implanted onto the surface of the brain beneath the skull.

To use it, the patient attempts to mouth codewords from the NATO phonetic alphabet, such as Alpha, Bravo, Charlie and Delta.

To say the word cat, for example, the patient would need to attempt to mouth the words Charlie-Alpha-Tango.

A computer then analyzes these signals and translates them into the specific letter that they represent.

Scientists found it took about two seconds on average for each letter to be translated.

This is equivalent to about 29 characters a minute, or seven words.

It takes about 30 seconds to ‘say’ sentences like ‘how are you today?’, or about 10 seconds to type out ‘hello’.

A total of 1,000 words were spelt out with the device by the patient — or 85 per cent of those used in every day spoken English.

The scientists said this could be extended to 9,000 words.

The computer got about one in 16 letters wrong.

Sean Metzger, a neurosurgeon involved in the study, said the patient ‘really enjoyed using this device because he’s able to communicate quickly and easily with us’.

‘I got to learn a good deal about him,’ he added, and that the patient ‘really didn’t like the food where he lives’.

Dr Patrick Degenaar, a neuroprosthetics expert at Newcastle University who was not involved in the study, heralded the results as ‘impressive’.

The patient is still able to use grunts and moans, but is not able to say complete words.

He was communicating previously by using a pointer attached to the top of a baseball cap to type out words on a screen.

The electrode was implanted into his brain in 2019, with scientists then training it to translate different brain waves to specific letters. 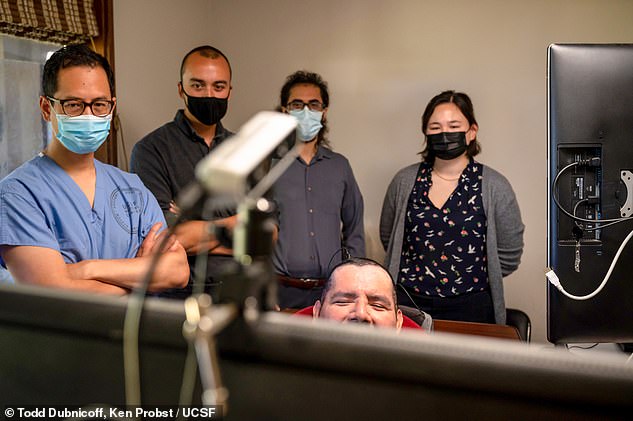 Pictured above is the patient (sitting) alongside (from left to right) Dr Edward Chang, the neurosurgeon who led the research, Sean Metzger, a PhD student mentioned in this article, David Moses and Jessie Liu. All the scientists were involved in the study 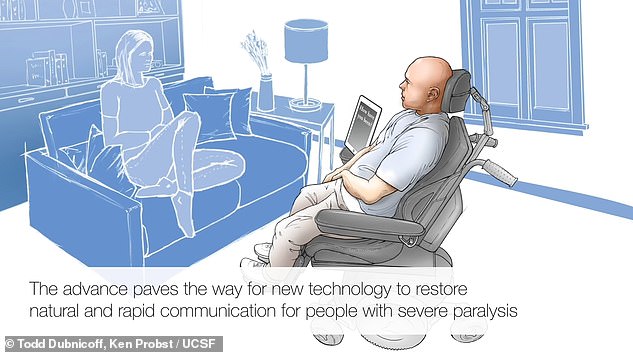 The University of California, San Francisco, scientists said the device could be used in someone’s home to improve their communication with others 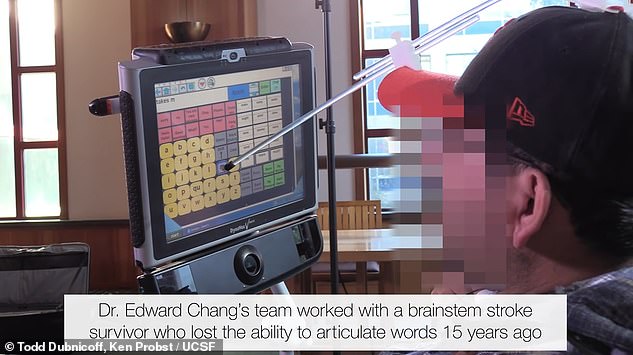 Previously, the patient communicated by hitting letters on a screen using a long stick, which was attached to a cap on his head. He can still make grunts, but can’t string together complete sentences

He had suffered a pontine stroke a decade-and-a-half ago, where a blood clot disrupts the flow of blood to the pons region of the brain stem.

The rare stroke can be deadly or leave patients with paralysis, although exact symptoms vary depending on the stroke’s location.

Estimates suggest nearly 5million Americans are living with some form of paralysis, while 700,000 have cerebral palsy.

The study was published in the journal Nature Communications.