Beloved of intrepid explorers and school run mums alike, the one millionth Land Rover Discovery rolled off the production line today before embarking on an epic 8,000 mile fund-raising expedition miles to China.

The aim is to raise money for the Red Cross which uses the 4X4 vehicles across the globe in its humanitarian work.

The landmark millionth off-roader has been produced at Jaguar Land Rover’s  factory in Solihull in the West Midlands – one of the firm’s three UK plants.

Dubbed the ‘Journey of Discovery’ it was  being launched with help of a number of renowned experienced explorers who have all used the Land Rover Discovery in their adventures – including Bear Grylls, Sir Ranulph Fiennes, Ray Mears, Monty Halls and Polar explorer Ben Saunders.

Sir Ranulph Fiennes used one to discover a lost city and TV property guru Kirstie Allsopp uses one for the school run. Now it is to embark on a special expedition from its birthplace in Birmingham one of its fastest growing markets Beijing in China.

It will be one of three Discovery 4X4s  taking part in a 50-day  adventure  travelling through more than a dozen countries across Europe and Central Asia, culminating at the Beijing motor show on 23 April.

The expedition aims to raise £1million for the International Federation of the Red Cross and Red Crescent Societies (IFRC) in what Land Rover says is its most ambitious fundraising project ever. 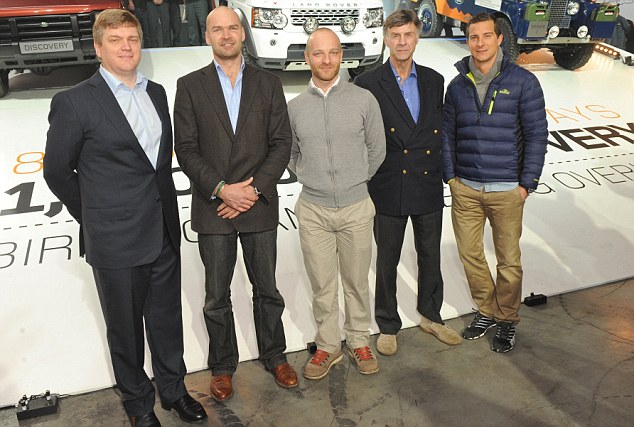 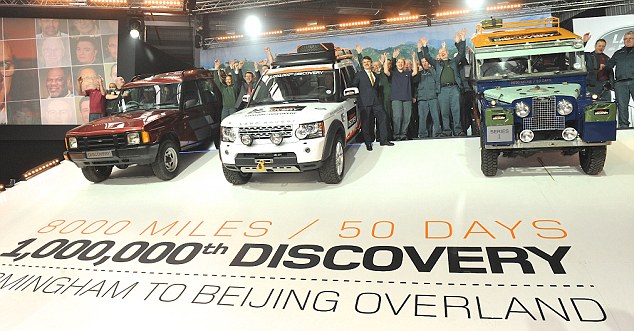 At launch in 1989 it was  third Land Rover model – sitting between the luxurious Range Rover and the original, rugged Defender.

Since then it has picked up more than 200 awards around the world and last year saw record worldwide sales of nearly 45,000 across 170 markets with 83 per cent exported from the UK.

The Discovery can seat up to seven passengers, has a load space volume of up to 2,500 litres and is packed with technology including Land Rover’s award-winning Terrain Response System, which adapts the vehicle to respond to differing terrains and driving conditions including snow and sand.

A Land Rover spokesman said: ’The success of the Discovery alongside other Land Rover models has helped to create a positive momentum at the company’s Solihull operations. The facility now employs around 6,000 people following a recruitment drive launch six month ago, boosting the workforce by 20per cent to support its expansion plans.’ 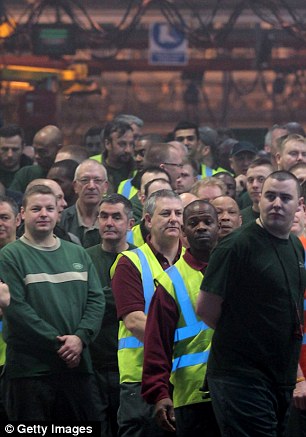 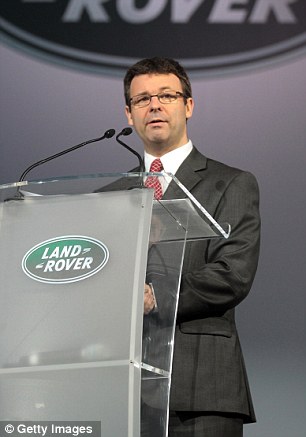 It recently recruited 1,000 new staff. Alan Volkaerts, Operations Director, Solihull Operations said many employees had worked there from the first to the millionth vehicle: ‘They have done a brilliant job, and have displayed great dedication and service. These are the men and women who have made the Discovery the success story it is today. ‘

The fund-raising China challenge follows in the tyre tracks of ‘The First Overland Expedition’ of 1955, in which a team in Series 1 Land Rovers set out from Birmingham to Beijing. That expedition had to divert to Singapore, but in the spirit of the original challenge the Discovery will be crossing many of Land Rover’s major markets including the UK, Russia and China.

Phil Popham, group sales director for Jaguar Land Rover said: ‘Discovery is an extraordinary vehicle. There is no better vehicle in which to tackle all weather and all terrain.’

In 2008, as part of Land Rover’s 60th Anniversary and the 100th anniversary of the Royal Charter being granted to The British Red Cross by HM King Edward VII, the company donated 60 vehicles to the charity – half in the UK and half globally.

More details of the expedition and the charity work at: www.landrover.com/million