Millions of people across France’s largest cities are enjoying their last night of freedom ahead of the strict 9pm curfew which came into force on Friday night.

France is fighting against a resurgent epidemic that has now filled a third of the country’s intensive care units with COVID-19 patients and is again putting Europe to the test.

President Emmanuel Macron announced curfews on around 20 million people in the Paris region and eight other French metropolitan areas starting tonight to try to slow the tide.

France has seen its case totals soar during the coronavirus second wave, reporting 25,000 cases on Friday along with 178 deaths. The cases figures is a rise of 5,000 on the same time last week. 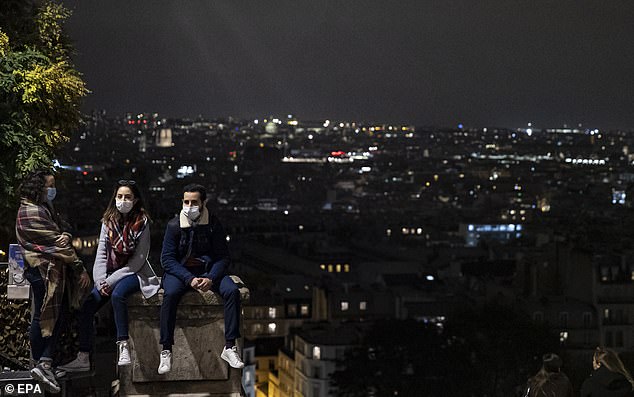 People wear protective face masks as they look out at the Paris skyline from Montmartre at nightfall, just hours before a city-wide night time curfew goes into effect in Paris, France 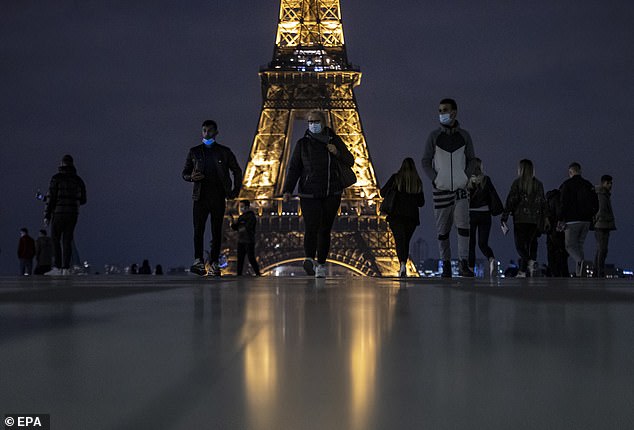 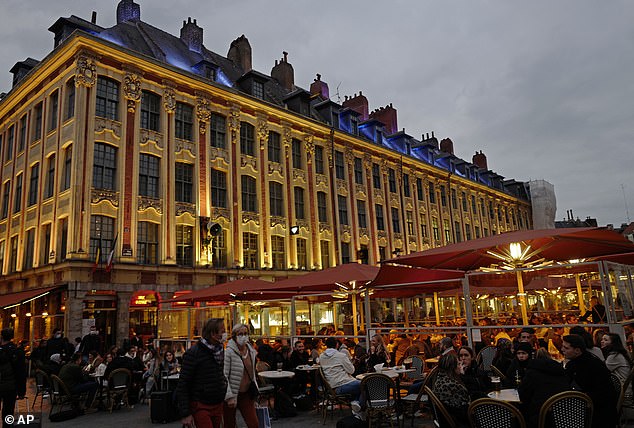 People enjoy a drink on a restaurant terrace in Lille, northern France before the city curfew 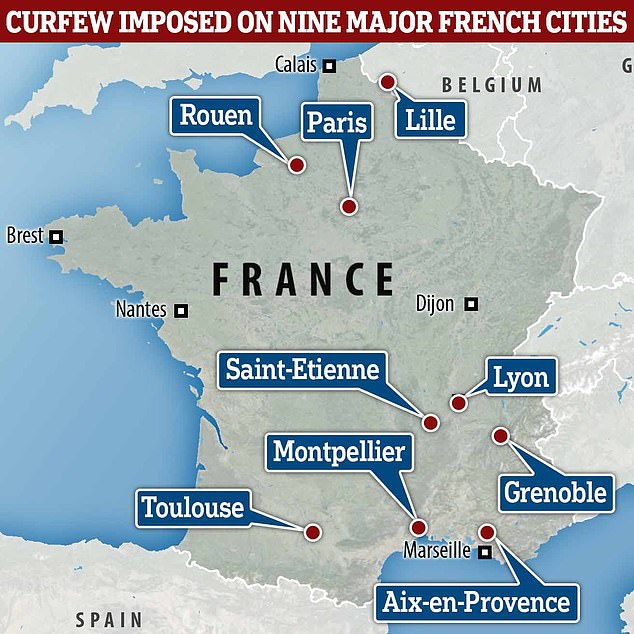 The capital will now shut down for nine hours from 9pm until 6am, in a bid to stop the disease circulating, President Emmanuel Macron revealed earlier this week.

All bars, restaurants, theatres and similar businesses will have to shut at 9pm sharp from Saturday, said Mr Macron.

In a live TV interview on Wednesday evening, France’s Macron confirmed that France was now ‘being hit by the second wave.’

‘This virus that we have known from the beginning and which has struck us for eight months, is coming back,’ he said.

‘We have not lost control. We are in a situation which is worrying and which justifies that we are neither inactive nor in panic.

‘It is equally worrying in other European countries, such as Germany which is also taking restrictive measures. 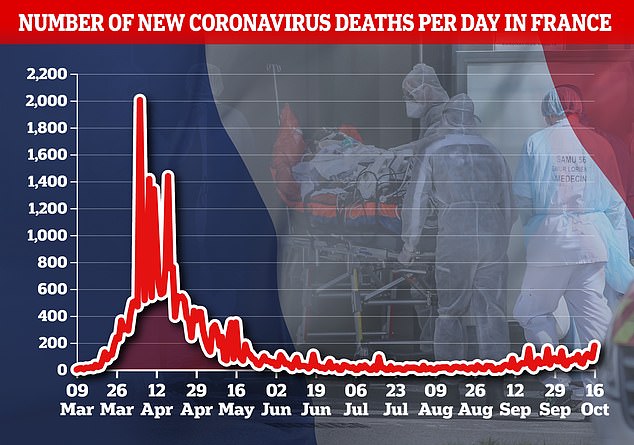 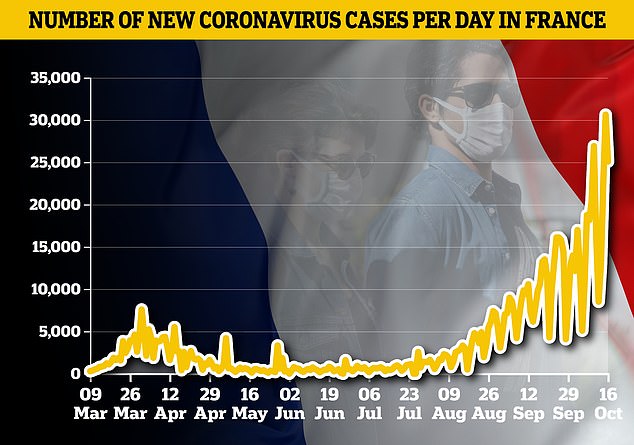 ‘Spain and the Netherlands are also in a very worrying situation, and have taken very restrictive measures in recent days’.

A state of health emergency in France was previously declared in March in response to spiralling infections as the first Covid-19 wave hit.

Mr Macron said this State of Emergency was now set to be re-introduced, along with the other tougher measures, from Saturday.

It followed the number of Covid-19 infections rising by 26,896 in 24 hours last Saturday – a record since widespread testing began.

Mr Macron’s last major TV address was on Bastille Day, July 14, and since then the wearing of face masks has been made compulsory.

France first went into strict lockdown in March, when all bars and restaurants were closed, and people need passes to go out for an hour.

But an expert panel set up to evaluate France’s response to the pandemic reported on Tuesday that there were ‘clear failures of anticipation, preparation and management’. 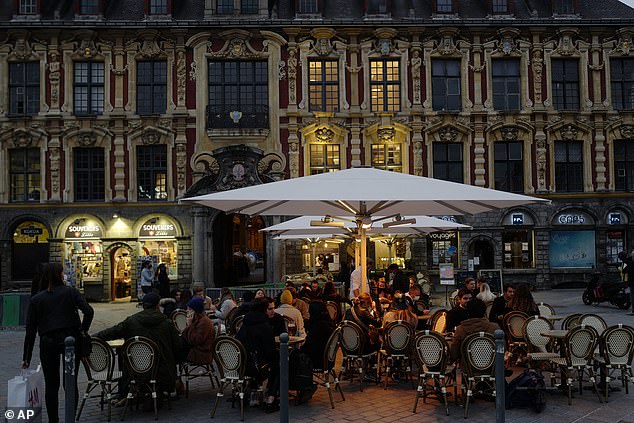 France is deploying 12,000 officers to enforce the curfew coming into effect Friday night 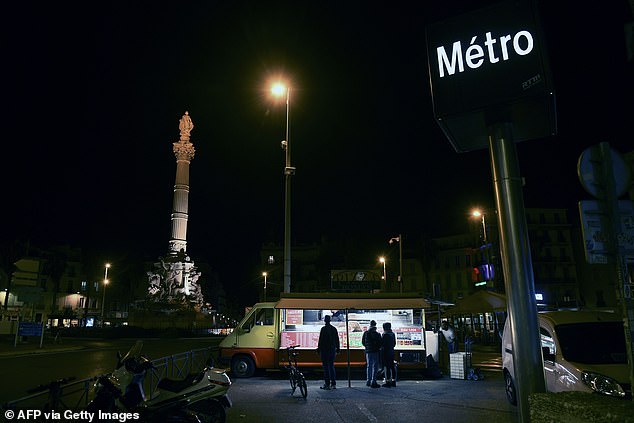 People gather around street food truck in Marseille, southeastern France ahead of the curfew 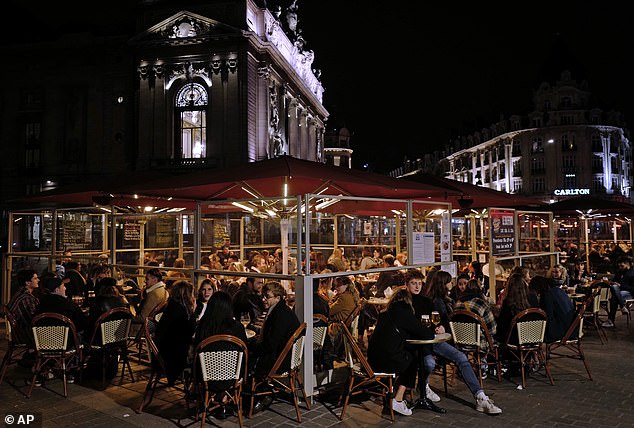 There were particular problems with a shortage of face masks early on, and the authorities were slow to introduce testing.

Martin Hirsch, the head of the 39 hospitals in greater Paris, warned: ‘By around October 24, there will be a minimum of 800 to 1,000 Covid patients in intensive care, representing 70 to 90 percent of our current capacity.’

Mr Macron said unemployment emergency wages of ‘100 per cent for the employer will be reactivated’ during the curfew in the leisure sector, to include hotels, cafes and restaurants.

Employees would get 84 per cent of net wages, said Mr Macron.

Mr Macron said he did not want people ‘going bankrupt because of this curfew, as was the case during lockdown’.

Despite this, night public transport will continue during the four weeks of curfew, with passes allowed for essential workers. 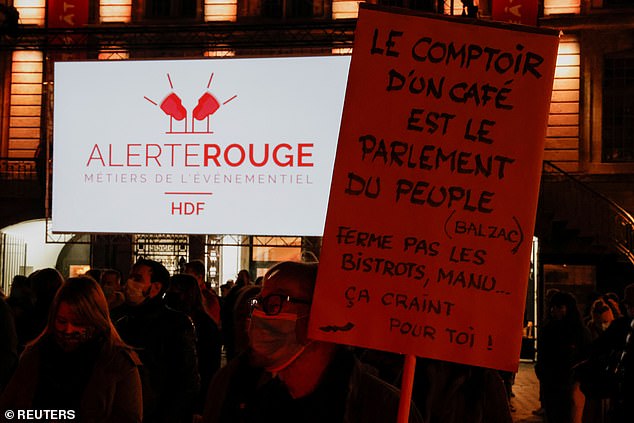 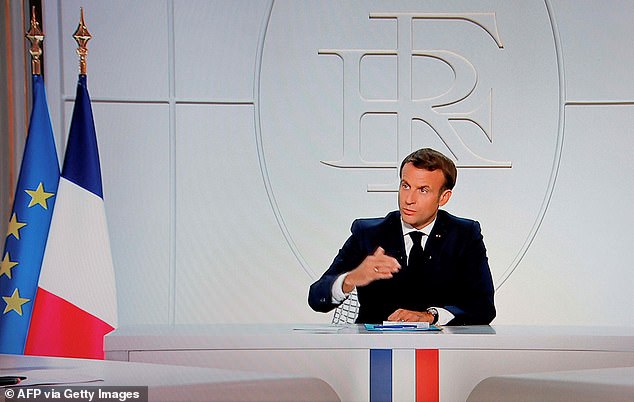 French President Emmanuel Macron addressing the nation during a televised interview from the Elysee Palace, announcing Paris and eight other major cities will now shut down for nine hours from 9pm to 6am, in a bid to slow the spread of Covid-19 which will last for one month

The government continues to send mixed messages about the virus. In addition to the curfew in several cities, the prime minister announced a nationwide ban on public weddings Thursday, even as the president encouraged French people to travel as usual for upcoming autumn school vacations.

The government announced it will deploy 12,000 police to enforce the new curfew, and will spend another 1 billion euros to help businesses hit hardest by the latest virus restrictions.

‘Our compatriots thought this health crisis was behind us,’ Castex said. ‘But we can’t live normally again as long as the virus is here.’

France is registering nearly 180 virus cases per 100,000 people every week, with 22,591 total new cases Wednesday. It has reported one of the world’s highest virus-related death tolls, at more than 33,000 lives lost.