Millions of pounds of taxpayers’ money have been wrongly spent on legal aid, the Daily Mail can reveal today.

Huge sums of public cash have been siphoned off by dodgy lawyers and their clients.

And the quango which controls legal aid payments wasted up to £20million on unjustified handouts last year, according to its own estimates.

We can disclose for the first time that one law firm was paid an astonishing £793,000 in error, and went bust before the mistake was found 18 months later.

Another law firm is being investigated for fraud after concocting spurious legal aid claims totalling nearly £100,000.

A total of just under £1.6million in fraudulent activity has been uncovered by the Legal Aid Agency (LAA) anti-corruption unit in the last two years.

Aside from criminal activities, the LAA calculated that last year it handed more than £14million of taxpayers’ money to law firms which should not have been paid out, and wrote off a staggering £6million in bad debts by firms.

The cash paid to firms was later found to be invalid – but it was too late to claw the money back. Last night one MP said it raised ‘serious questions’ about how the £1.76billion annual legal aid budget is spent.

‘Urgent action should be taken to ensure that hardworking taxpayers’ money is being properly spent,’ said Natalie Elphicke, the Conservative MP for Dover.

Sources said this was due to the LAA reviewing ‘historic debts where recovery is no longer possible’. Cases could include ones in which people who have wrongly received legal aid have moved address, died or cannot be traced through credit reference agencies. 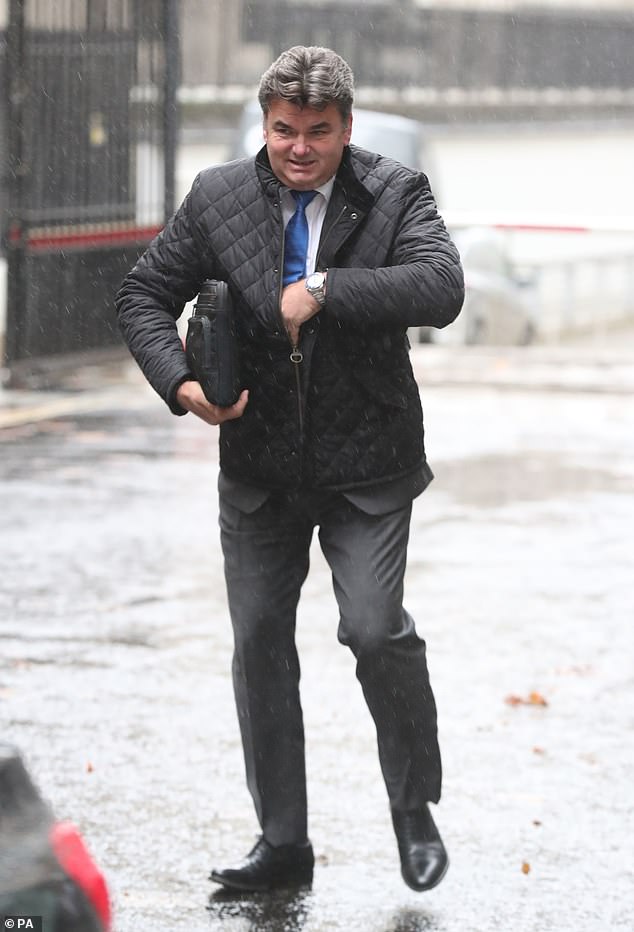 Disgraced tycoon Dominic Chappell reportedly landed more than £100,000 in legal aid to fight charges of tax evasion on the £2.2million he made from buying BHS

But when the LAA tried to claw back the cash, it found the law firm had gone into liquidation.

The LAA said it was ‘taking steps to recover’ the money.

It estimated the amount of taxpayers’ money incorrectly handed to law firms last year climbed to £14.5million, up from £11million the year before.

Disgraced tycoon Dominic Chappell reportedly landed more than £100,000 in legal aid to fight charges of tax evasion on the £2.2million he made from buying BHS.

The shamed entrepreneur was jailed for six years last month after he was found guilty of evading tax on profits from the purchase of the failing chain from Sir Philip Green for just £1 in 2015.

In some cases, law firms may have submitted incorrect claims about the cases they were seeking taxpayer funding to bring, known as ‘misreporting’.

In other cases, applicants had failed to disclose relevant information about their finances, and in others there were ‘assessment or process errors’ by the LAA or legal aid providers.

Fraud uncovered by the LAA included £94,402 paid to one law firm – which cannot be named for legal reasons.

The £94,000 was recovered by fraud investigators and a criminal investigation is underway.

‘Misreporting’ is defined by the LAA as ‘calculation errors, inputting errors or accepting insufficiently detailed invoices’ as well as ‘using out of date payment rates or incorrectly calculating the frequency of income receipts’.

Other mistakes might involve sending in a bill for an ‘incorrect number of pages of evidence,’ sources said.

In some cases, applicants may have made errors in declaring their income or expenditure.

The LAA’s annual report noted: ‘The complexity of legal aid means there is an inherent risk of error because of incorrect eligibility assessments or inaccu- rate payments.’

The LAA oversees all taxpayer-funded cases in England and Wales and spent £1.76billion in 2019-20.

A Legal Aid Agency spokesman said: ‘We take the recovery of debts seriously and have a dedicated taskforce set up to tackle fraud.’

David Spencer of the Centre for Crime Prevention said: ‘Enough is enough. It is time for the Ministry of Justice to conduct an urgent review of the entire legal aid machinery and introduce the many changes that are much needed and long overdue.’

The self-styled playboy and former husband of Formula 1 heiress Petra Ecclestone was awarded the taxpayer cash after being arrested for allegedly assaulting and harassing a business associate, according to The Sun.

Stunt, 38, denies the charges which include possessing cocaine, which police are said to have found when he was arrested at a £4million Knightsbridge property, and damaging a police cell.

David Spencer, from the Centre for Crime Prevention, said: ‘Legal aid is not meant for people like Stunt, it shouldn’t be available to people like Stunt, and the fact that he can access it shows how badly the system is in need of reform.’