EXPRESS INFORMER > News & Politics > Millionaires offer to pay for a van and provide £10,000 for a skint mother-of-two’s business

On this week’s episode of Channel 5’s Rich House, Poor House, two millionaires are so touched by the story of a skint mother-of-two that they decide to help finance her business.

Best friends Matt Haycocks and Dan Buck, who live in the same luxury building in Leeds, decided to provide £10,000 and a van for stretched mother Anna Bardgett, 38, so she could leave her job as a photography shop assistant to become a dog walker.

The two divorced single fathers, who are used to the finer things and never have to worry about money with a disposable income of £1,400 a week apiece, spent five days living Anna’s life, who usually has  £65 to survive on for food, clothes and emergencies.

After spending time at Anna’s home in Keighley, West Yorkshire, they were impressed by her work ethic and determination to provide for her daughter Sarah, 19, and son Billy, three, and wanted to help her change her life.

On this week’s episode of Channel 5’s Rich House, Poor House,  Matt Haycox (left) and Dan Buck (right), two millionaires from Leeds, are so touched by the story of a skint mother-of-two that they decided to help finance her business 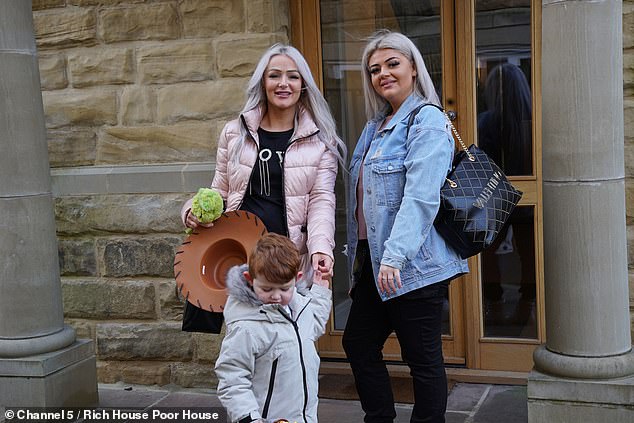 When the life swap was complete, Matt and Dan sat down with the busy mother, who works 40 hours a week, and told her they wanted to help.

‘We thought that probably one of the best things for you, if you’re happy to do this is, we’ll supply you with a van,’ Matt said.

‘We’ll provide you with enough money to have three months worth of either not needing to do your job, or certainly cutting it down so you can build your dog walking business.

‘We’re gonna commit 10,000 quid for you, and hopefully that should provide you with everything you need.’ 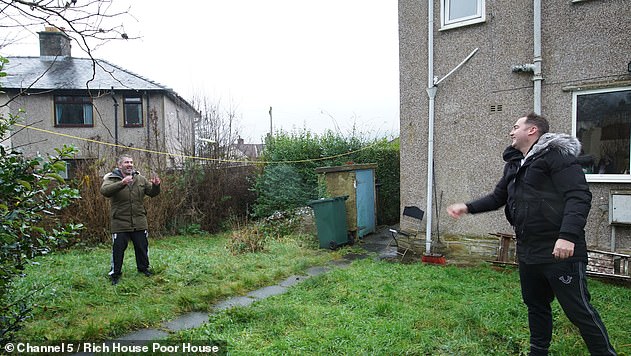 Matt and Dan (pictured in Anna’s garden) are used to the finer things in life, but eventually adapt to life on the breadline

‘I am literally speechless, Anna exclaimed.

Dan agreed, adding: ‘We just heard the nicest things about you, you’re a special person, and you deserve a lucky break.’

Anna was so happy with the news she rushed to give the two businessmen a hug.

For Matt and Dan, spending five days in Anna’s shoes opened their eyes to how much she had to work and struggle in order to earn enough to feed her family. 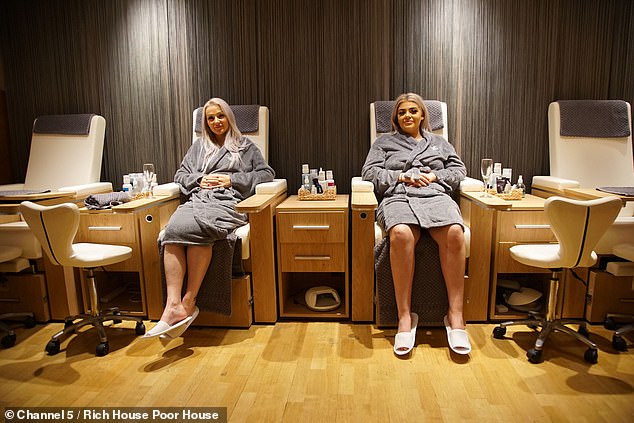 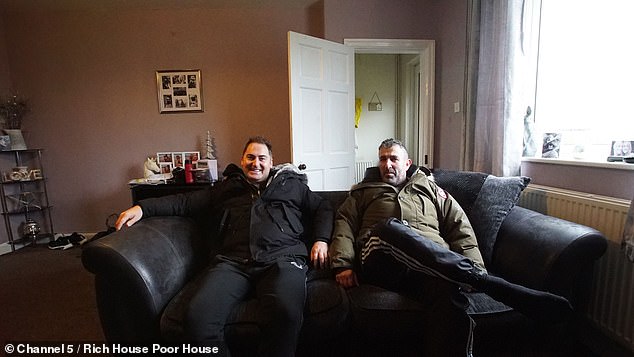 After visiting the photo shop where she works and speaking to her boss Sharon Beckwith, it became clear that she works long hours, and has very little family time.

Sharon told how Anna has to work 40 hours a week, earning about £150 to make ends meet.

She added that the mother-of-two enjoys very limited time with her son Billy in the evenings, leaving him at nursery and then in the care of a child minder when she has to work.

That’s when former club owner Matt, who made his fortune from investments, and Dan, who started a shoe chain of 20 stores across the UK, decided to come up with a solution to help Anna. 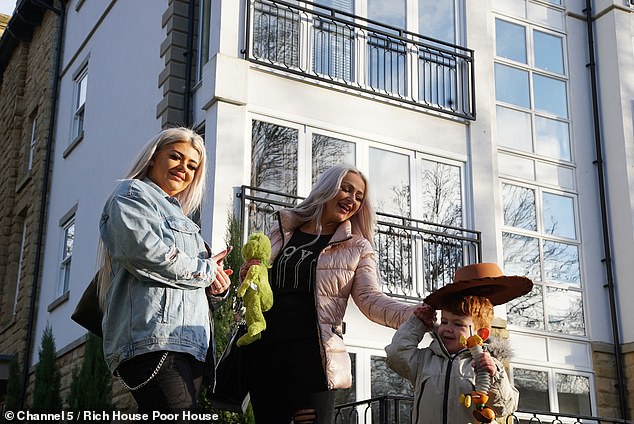 Having dinner with Anna’s mother, also named Sharon, they heard that Anna got pregnant with Sarah aged 19, and struggled to reconcile her youth and her role as a mother, having to rely on her mother’s help to make it.

Anne loves animals and said in the programme that she would love to set up a dog walking business, but had never found the time.

Eager to help her mother make her dream come true, Sarah arranged for her to meet with a professional dog walker, who discusses her business and daily organisation with Anna. 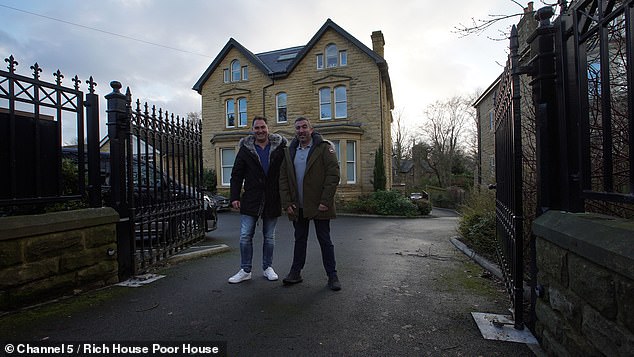 Matt and Dan live in the same apartment building) and have been friends for 20 years, both being incredibly successful in business

The overworked mother was delighted to explore the subject she’s been dreaming about, and admitted she’s enjoyed her time in Matt and Dan’s shoes, not having to worry about money.

During a shopping spree at one of Dan’s store, Anna splashed on pairs of trainers worth more than £120 each for Sarah and herself, and teared up, appreciating being able to spoil her daughter for once.

They even enjoyed some pamper time together, rekindling their bond by leaving their daily worries behind. 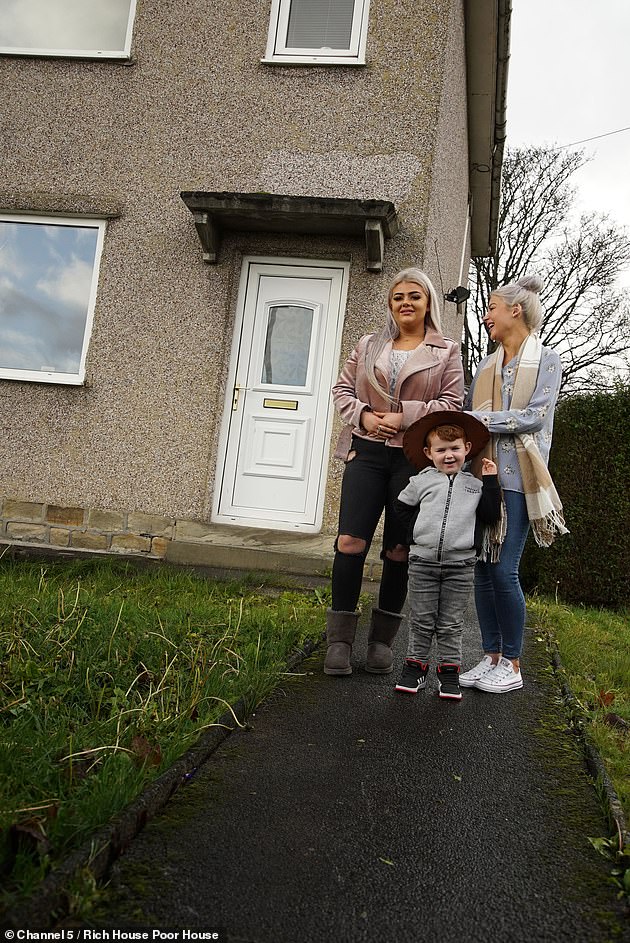 Anna (pictured with Sarah and Billy)  is left ‘speechless’ by Dan and Matt’s kindness at the end of this week’s episode of Rich House, Poor House

Meanwhile, Matt and Dan had to be resourceful to get by on a £65 budget, which is miles away from the Versace bedding and chauffeured luxury cars they are used to.

Not used to counting pennies, they found being on a tight budget for the weekly food shop a struggle, bur the experience proved an ‘eye-opener’ that made them both realise how lucky they are to lead wealthy lifestyle.

It made them vow to be more thoughtful towards their employees, and more appreciative of their lot in life.

However, their friend Louise, who visits Anna and Sarah, explained that while successful, the two divorced dads are not entitled, and are ‘incredibly genorous’ and do a lot for charity.