Millionaire trophy hunter, 68, is caught boasting how he helped to shoot 13,000 doves over four days on trip to Argentina – as pressure grows on UK government to implement long-promised ban on the deadly sport

A millionaire trophy hunter has been caught boasting about helping to kill 13,000 doves and blasting a baboon.

In a phone call with an undercover investigator, businessman Rob Weir recounted a £2,800 hunting trip to Argentina, saying: ‘There were five of us – one of them was a lady – and we shot 13,000 doves over four days.’

He said he had limited himself to 1,500 shells a day, adding: ‘I tell you what, I’d love to go back. What an experience.’

BOASTS: Rob Weir (left), who boasted about helping to kill 13,000 doves and blasting a baboon, poses with a dead buffalo in 2017

Mr Weir, who owns H. J. Weir Engineering, one of the world’s largest manufacturers of industrial laundry machines, said he had also made repeated hunting trips to South Africa over the past seven or eight years.

‘The very first time I went out there I wanted to shoot a baboon. I had a thing about shooting a baboon, I don’t know why but I did,’ he said. 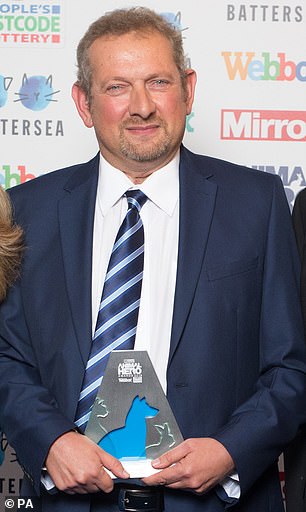 The 68-year-old businessman, who also owns the Weir Rallying motorsports team, made his comments to Eduardo Goncalves (above, at the Mirror Animal Hero awards in 2019) – the author and founder of the Campaign to Ban Trophy Hunting

Approached for a comment, Mr Weir, who has not broken any laws with his hunting activities, said: ‘I’ve got nothing further to say.’

The 68-year-old businessman, who also owns the Weir Rallying motorsports team, made his comments to Eduardo Goncalves, the author and founder of the Campaign to Ban Trophy Hunting.

Mr Goncalves has spent the past year posing as a trophy hunter in order to uncover the industry’s secrets for a forthcoming book.

It comes as pressure grows on the Government to implement its long-promised ban on trophy hunting, a pledge first made in the Queen’s Speech in October 2019 and repeated in the Tory Election manifesto two months later.

Despite an estimated 200 animals being killed by British trophy hunters every year, there is still no official date for introducing the ban, although it is thought it will be mentioned again in next month’s Queen’s Speech.

Campaigners are worried, however, that civil servants may try to water down legislation by including a clause allowing hunters to import trophies if they pay a ‘blood money’ fee to conservation projects.