EXPRESS INFORMER > News & Politics > Millennials throw away 633 meals a year because they don’t know how to reheat leftovers, poll finds

Millennials throw away 633 meals a year because they don’t know how to reheat leftovers, poll finds

Millennials throw out the equivalent of 633 meals a year because they do not know how to reheat food, a poll has found.

Those who took part in the poll said they would rather bin food than re-heat it, admitting good food is going to waste.

Researchers found the amount of food millenials confessed to throwing away adds up to more than 1,700lbs.

Some of the dishes included in the total include 34 plates of Bolognese, 25 chicken Tikka Masalas, 23 plates of bangers and mash, 53 plates of fish and chips and more.

What is included in the 1,700lbs of thrown away meals?

The poll, conducted by cookware brand Pyrex, found millennials – aged 18 to 34 – waste more than three times as much as people aged above 34 who throw out the equivalent of just 186 plates of a food a year – 225 kilograms or 493 lbs.

And the millennial food waste mountain is more than double the average food waste in the UK of 300 plates of food – just over 800 lbs per household.

Almost a quarter of millennials (23%) admitted they do not know how to deal with leftovers.

By comparison just six per cent of people aged over 55 said they did not know what to do with leftover food.

A further 18 per cent of millennials said they eat out instead of eating the food they have at home leading to even more waste.

Just four per cent of those aged over 55 said the same.

A fifth of millennials (21%) said they create yet more waste because they get bored eating what they already have at home compared to just seven per cent of those aged over 55.

One of the other main reasons good food is thrown out is because 38 per cent of people fear they will get sick if they eat it after its ‘best by’ date.

Pyrex asked 2,000 UK adults what they did with their food leftovers. 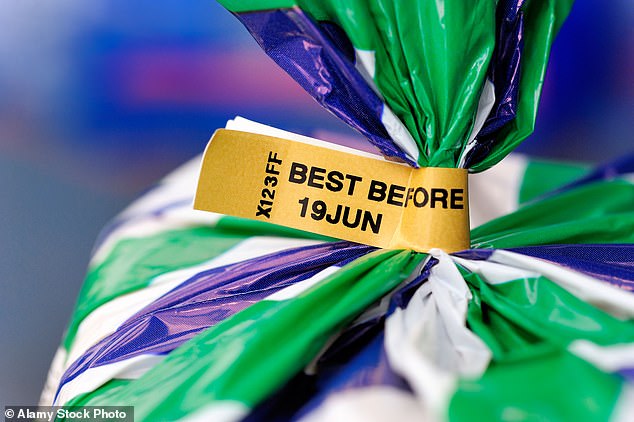 Spokeswoman Alexandra Blyth said: ‘These findings are a reflection of the fast-paced and sometimes unpredictable lives millennials lead.

‘It is arguable that millennials’ jobs and social lives can mean that finding quick options for food are often more appealing than planning in advance and ensuring that all food in the fridge is used up.

‘As they tend to be busy people their experience of easily available meals may mean more food is thrown away but it is easy to give life to leftovers.’