A drugs probe has been launched by the Military Police into soldiers from a regiment facilitating Liverpool’s coronavirus mass testing programme after a Bonfire Night party.

The servicemen involved are from the Yorkshire-based 32 Engineer Regiment and have been questioned over the bash at their digs.

They have been subjected to Compulsory Drugs Tests, the results of which have not yet come back.

Some of their colleagues – not involved in the party – are currently in Liverpool helping with the city’s big Covid-19 testing programme.

It is understood that the party at Catterick, North Yorkshire, had at least 21 guests and would appear to have broken strict rules of England’s second national lockdown.

A source told the Mirror:  ‘This has caused a major problem and senior officers are absolutely disgusted that soldiers have broken lockdown rules.

‘If any are found to have taken drugs that night the book will be thrown at them but it is bad enough that their regimental colleagues are on the frontline against Covid-19.

‘Just by breaking the rules on social distancing so flagrantly they have tarnished the good work being done by their comrades in Liverpool.’

The RMP is looking into claims drugs were taken at the party and more than 21 people were at the Bonfire Night bash. 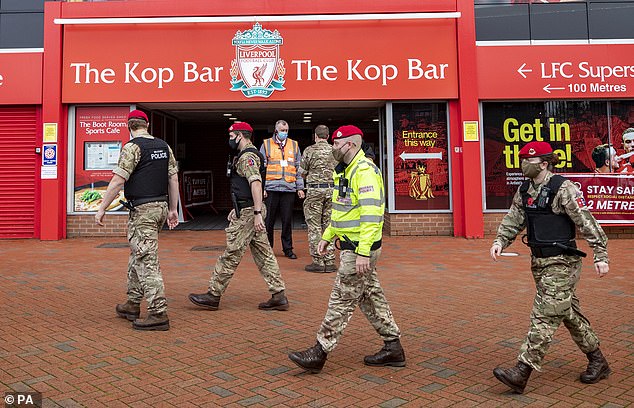 There are also allegations there was an attempt to catch culprits on the night, but the revellers fled and hid off base.

One soldier is said to have gone AWOL in a bid to avoid the drug testing after the party was rumbled, although is currently unconfirmed.

It sparked a total lockdown of the camp on Friday and soldiers taken to testing centre off-site.

It comes just months after one of the Queen’s bodyguards was arrested on suspicion of drugs possession after white powder was found in a bathroom at St James’s Palace.

The private was said to have nine bags of cocaine and ketamine among his possessions after police searched his room and car at Wellington Barracks by Buckingham Palace.

The Coldstream Guardsman was arrested on Tuesday by the Royal Military Police and has been removed from ceremonial duties pending the outcome of the investigation.

An MoD spokesman told MailOnline: ‘We are aware of an incident at Catterick Garrison last week

‘While this matter is under investigation, it would be inappropriate to comment further.

‘Those who fall short of the Army’s high standards can expect to face sanctions including dismissal.’