Mike is NOT pulling the strings: New boss of Sports Direct – and Ashley’s future son-in-law – insists he’s in charge after taking the reins

The new boss of Frasers Group has insisted his future father-in-law Mike Ashley is ‘not pulling the strings’.

In his first interview since taking over at the High Street retail giant behind Sports Direct, Michael Murray said ‘I am definitely my own man’ and ‘ultimately the decision lies with me’.

The 32-year-old, who became Frasers chief executive this week, also backed the High Street, insisting it is not ‘dead’, but ‘different’.

Michael Murray, 32, insists he is in control at Sports Direct owner Fraser Group and not his future father-in-law – and the company’s founder – Mike Ashley

He revealed plans to open up to ten futuristic Sports Direct stores, with a £10million site in Birmingham opening today.

The four-storey Birmingham flagship is a high-tech revamp of a typical Sports Direct, featuring an E-sports gaming room, a sports bra fitting service and Evans Cycles and Game concessions.

But as Murray warned costs are ‘going through the roof’, he said Frasers would be forced to put up prices.

Speaking to the BBC about taking over from his future father-in-law, Murray described 57-year-old Ashley as a ‘genius of his generation’.

But he added: ‘No, Mike is not pulling the strings.

‘We’ve worked in a partnership, a very collaborative one over the last two to three years. We have vocal debates. We agree, we disagree. But ultimately the decision lies with me on the outcome of where we take the company.

‘I’m definitely my own man.’

Ashley will stay on as Frasers chairman and biggest shareholder, with a 65 per cent stake.

He set up Sports Direct as a single store in Maidenhead in 1982 and grew it into a giant with 769 UK stores, 25,000 staff and £3.6billion in annual sales, snapping up brands including House of Fraser, Flannels and Jack Wills.

When Murray – who was not previously an executive on the company’s board – took over as chief executive on Monday, he became one of the youngest bosses in the FTSE 250. 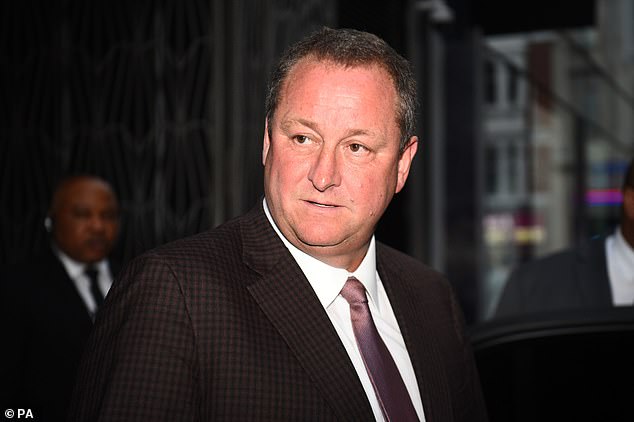 In the shadows: Mike Ashley will stay on as Frasers chairman and biggest shareholder, with a 65% stake

He has been credited with driving the strategy to win over young shoppers, re-build relationships with big brands such as Nike and Adidas, and improve the company’s stores.

He has already faced criticism from shareholders over plans that could see him paid a £100m bonus if he takes Frasers’ share price above £15 in the next three years, more than double yesterday’s closing price.

Murray was also paid more than £20million in consultancy fees by Frasers before taking over, through his property firm MM Prop.

And Ashley has been criticised for appointing Murray, who is engaged to his eldest daughter Anna, over suggestions he is trying to run the group as a personal fiefdom.

Richard Hyman, at consultancy TPC, said Murray’s appointment and bonus are ‘not a good look’, but underline Ashley’s hands-on approach to running the business.

He added that Ashley may be ‘pulling fewer strings’, but the idea he would not be pulling any is ‘very hard to believe’.

Hyman said: ‘Murray is bound to say that, isn’t he? Mike Ashley started this business on his own and is incredibly hands on.

‘I am sure Michael Murray will be more involved in the leadership and top decisions, but the idea Ashley isn’t going to be I find very hard to believe.

‘Mike Ashley may not be everyone’s cup of tea, but the facts speak for themselves, he has done an extraordinary job.’

Murray denied accusations of nepotism yesterday, saying: ‘I have definitely proved myself and my worth to the group.’