Thumbs up if you’ve reached the UK! Migrants land in Kent as Border Force scrambles to ‘multiple incidents’ amid ‘perfect weather’ for Channel crossings – after a record-breaking 202 made the journey yesterday

Around 10 migrants have landed in Kent this morning as Border Force scrambled to deal with a number of incidents – after a record-breaking 202 made the journey yesterday.

One young man seen giving a double thumbs up sign in Dungeness, Kent, this morning, while a woman was seen holding her head in her hands in apparent relief she had made the treacherous crossing safely.

A ‘really tiny toddler’ was seen running around wearing a Mickey Mouse top and hat and was joined by a boy of around 12 years old.

Two women – one pictured with her head in her hands – were at the scene while another was reportedly holding a Chanel bag. The migrants have all been detained by Border Force officials.

In a separate incident a boat of 30 migrants containing six children and two adults with physical disabilities called for help near Hardelot just before 5am today.

A total of 3,411 migrants have now made it to the UK on small boats and other craft this year – compared to 1,850 in 2019. This does not yet include numbers for today.

It comes just a day after a record-breaking 202 migrants made the treacherous crossing on Thursday.

One young man seen giving a double thumbs up sign in Dungeness, Kent, this morning

Border Force dealt with 20 separate incidents as dinghies, kayaks, zodiaks and even a children’s dinghy were used to make the treacherous crossings of the 21 mile wide Straits of Dover.

A source told MailOnline that it as ‘perfect weather’ to make the crossing on what is expected to be the hottest day of July today.

One local resident who lives on the sea front said: ‘They looked very well dressed. I thought the woman with the designer handbag was local at first until officers held blankets around her so she could go to the toilet.’

Around seven men were also seen lying on the pebbles with one young man lying under an umbrella with his eyes closed to shelter from the heat.

One man was wearing a Stone Island T-shirt while another donned a Nike cap.

Police and Border Force officials were seen putting possessions into evidence bags but there was no sign of a boat, according to an eyewitness.

They added: ‘Some of them were looking really happy to have made the crossing. One young man wearing a face mask was making a heart hand gesture and put his thumbs up before forming a gun sign with his fingers to celebrate.’ 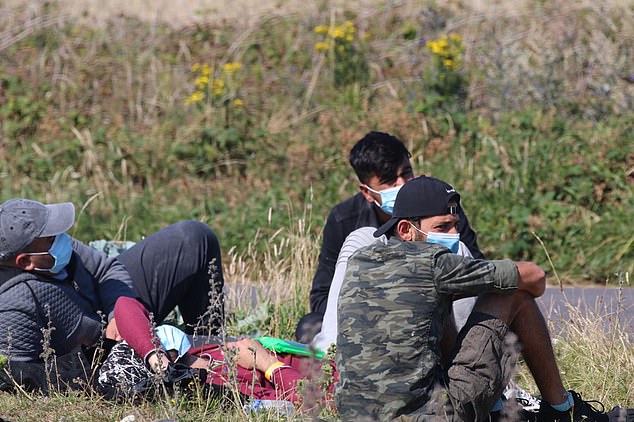 A group of 10 migrants, including a young child, made it to shore at Dungeness, Kent, this morning looking tired 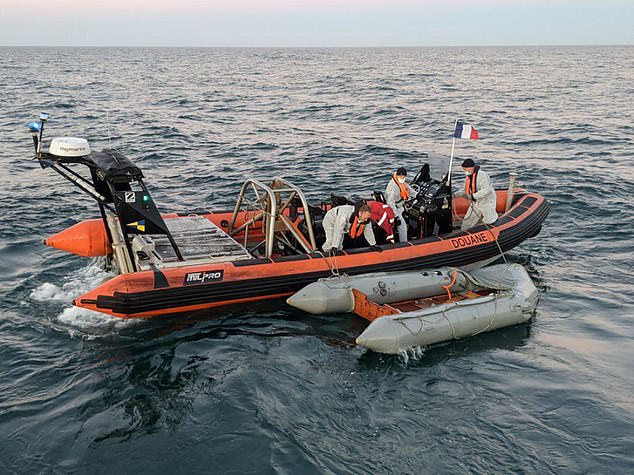 Meanwhile a boat of 30 migrants containing six children and two adults with physical disabilities called for help near Hardelot just before 5am today.

They were picked up by deep sea tugboat RIAS Abeille Languedoc and returned to the border police at the port of Calais at 9.30am.

French authorities also rescued a further 11 migrants spotted in difficulty on a boat off Wissant and returned them to Boulogne-sur-Mer shortly before 9am.

So far in July, 979 have made the perilous 21-mile trip across the busy Dover Strait shipping lane – a record for a single month.

The previous record was broken on July 13 when 180 made it to the UK coast.

Hundreds of migrants have been arriving in the UK in small boats every month, even with Britain being under coronavirus lockdown. 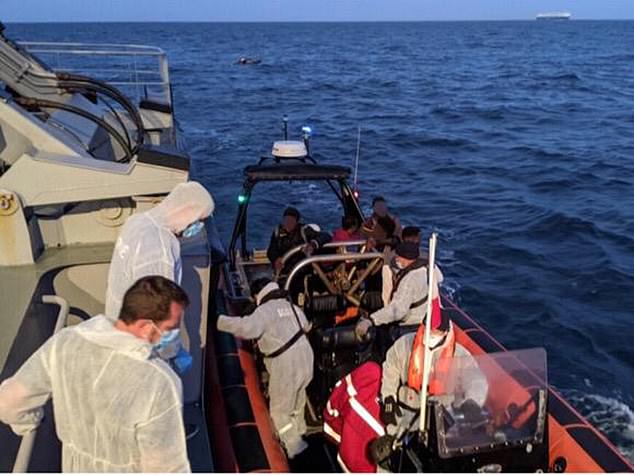 The group of 30 migrants were picked up by deep sea tugboat RIAS Abeille Languedoc and returned to the border police at the port of Calais at 9.30am 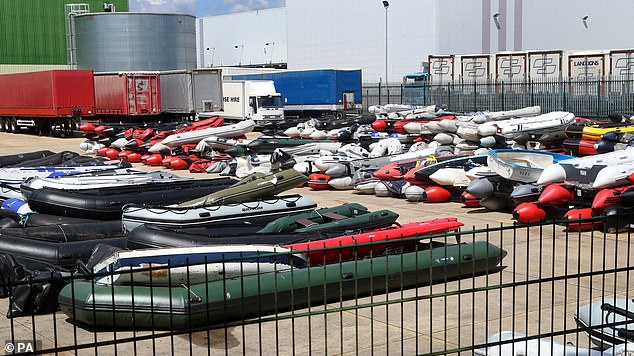 Home Secretary Priti Patel was in Calais on the same day 200 migrants tried to travel into Britain, to discuss a clampdown on illegal crossings with her French counterpart.

She said: ‘Despite all of the action taken by law enforcement to date – intercepting the boats, making arrests, returning people to France and putting the criminals responsible behind bars – the numbers continue to increase.

‘This simply cannot be allowed to go on.’

In May, the Mail revealed how French navy vessels are escorting some migrant-filled boats to British waters before handing them over to UK Border Force vessels without even intercepting them.

Some migrants are believed to threaten to throw themselves into the water, causing the French boats to stand off.