Zimbabwe has been associated with gold mining for more than a century and was the third largest producer in the world until the 1980s.

Then Robert Mugabe came to power. By 2008, the country’s gold industry was in ruins, mines were forced to close and production slumped.

That was when Mark Learmonth joined Caledonia Mining, at the time a small company with too many early-stage assets and not enough cash to see them through.

Here and now: Caledonia is profitable, pays a quarterly dividend and produces around 80,000 ounces of gold annually

Learmonth and his team set about transforming the business to create a company focused on gold production in Zimbabwe.

Today, Caledonia is profitable, pays a quarterly dividend and produces around 80,000 ounces of gold annually. Over the next three years, however, production is expected to more than triple to almost 250,000 ounces and the shares, now £10.70, should respond.

For many investors, Zimbabwe sounds alarm bells. On the ground, the situation is more nuanced.

Mugabe’s long rule left a country in devastation, but President Emmerson Mnangagwa is determined to lift his people out of poverty. Mining can play a key role and Caledonia has been doing its bit, with projects that are both recognised and appreciated by the government.

The firm’s main asset is Blanket, an underground mine in southern Zimbabwe, whose 62 Wealth & Personal Finance roots date back to 1904.

Over the past decade and more, Caledonia has invested substantially in the mine, production has soared and the site now employs 2,000 people, all of them local.

This is not just good political practice – it makes sound commercial sense too. With its long history of gold production, Zimbabwe has a plentiful supply of skilled miners and technicians and Caledonia is reaping the benefits.

The mine’s costs are low compared with many in the industry, safety records are exemplary and the company also works closely with local communities, which own 10 per cent of Blanket and receive annual dividends in excess of $2million (£1.7million).

Now that Blanket is making plenty of money, Learmonth is keen to take Caledonia to the next stage, turning the firm from a one-mine operation to a multi-asset business.

Two exploration sites have been acquired in the past two years and on Friday, the group completed the purchase of Bilboes, a mine already in production and with proven reserves of more than two million ounces of gold.

The site is expected to generate about 15,000 ounces this year, but production will rise more than tenfold as Caledonia develops the mine and installs infrastructure. That will take money – estimated at £250million – but Learmonth is determined to preserve his dividend track record, delivering quarterly payouts even as the business expands and develops.

Blanket revenues will provide some of the cash, debt is likely to play a part and Learmonth will almost certainly seek stock market help by issuing new shares. But as a former accountant and banker, he knows the value of money and will strive to keep share issuance to a minimum.

Dividends have been paid for the past decade, with 39p paid out in 2022 and the same or more expected for this year.

MIDAS VERDICT: Zimbabwe may not seem the obvious place to look for shareholder returns, but Caledonia Mining is delivering the goods and the stock should increase materially in price as the business grows. With gold looking bright, prospects are even more robust. At £10.70, the shares are a buy. And the dividend is an attractive bonus.

Centamin is another dividend paying gold miner. Based in Egypt, the company has grown from a cash-strapped exploration business in the 1990s to a fully-fledged, profitable producer today, generating more than 400,000 ounces of gold each year.

Midas recommended the shares in 2015, when the price was 62p.

Today, the stock is £1.26 and should deliver attractive rewards over the next few years.

Recent times have been hard for this business. Annual production exceeded 500,000 ounces in 2016 and 2017, but output fell as the company faced operational and production issues.

New management came in during 2020 and the group then embarked on a serious investment programme at both of its mines, open pit and underground. The shares, which had climbed to more than £2.30 in 2020, plummeted to below 80p last year amid concerns that the company would deliver little or no growth as the business regrouped under new boss Martin Horgan.

Today, the outlook seems much brighter. Horgan has a history of success in the gold mining industry, he has addressed investment challenges head on and the results should steadily improve over time.

The company is targeting sustained annual production of 500,000 ounces or more from 2024 and costs are expected to fall as big investment programmes come to an end and canny decisions make their mark, including the use of solar power to cut energy bills.

Even as Centamin has experienced operational turbulence, dividend payments have continued, with 5 cents expected for the year just ended, the same again forecast for 2023 and the chances of higher payouts thereafter.

MIDAS VERDICT: Investors who bought in 2015 have doubled their money and received a decent stream of dividends too. They may now choose to sell some stock and bank profits while the gold price is high. Long-term holders may prefer to keep the faith, however. Horgan is a shrewd operator, gold is a handy addition to any portfolio and this business should gain ground in the coming years, handing out dividends all the while.

Add some sparkle with emeralds

Gold is a unique asset, prized for its lustre, beauty and value.

Coloured gemstones are rather different, but also in demand. Rising prices and growing awareness are good news for Gemfields, which owns the largest ruby and emerald mines in the world, as well as the luxury Fabergé brand.

The company has a tangled history. Listed on the stock market until 2017, the group was taken private by a specialised investment firm, leaving many ordinary shareholders feeling disgruntled and short-changed. 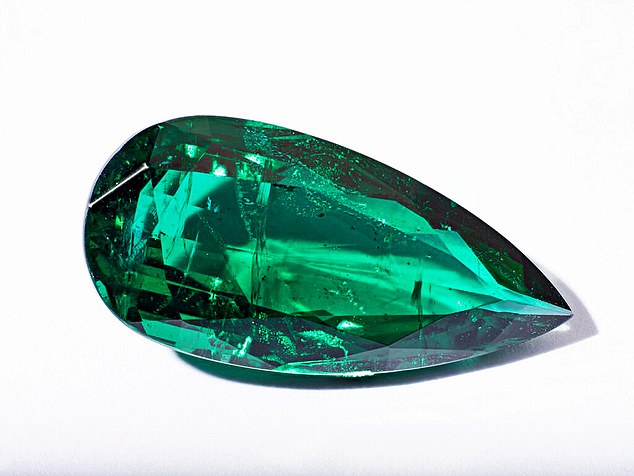 The shares have rebounded from pandemic-induced lows, the price is 18.5p and chief executive Sean Gilbertson is optimistic.

The son of mining veteran Brian Gilbertson, Sean has mining in his blood. And he is keen to make a mark.

Gemfields owns an emerald mine in Zambia and a ruby mine in Mozambique, but it sells rough stones at auction too. Four emerald auctions delivered record revenues of $149 million (£125million) in 2022, a 62 per cent increase over 2021. Three ruby auctions generated record revenues too – $167million, compared with $147million the previous year.

The Fabergé business helps put coloured gems front of mind among wealthy consumers and a 007 Fabergé egg is expected this year, commemorating 60 years of James Bond films. Gemfields has not been helped by civil unrest in Mozambique, which put expansion plans there on hold.

Nonetheless, its balance sheet is strong and Gilbertson is a dividend enthusiast, with 2.6p expected for this year, putting the stock on an extraordinary yield of almost 14 per cent. Brokers forecast a payment of at least 2p for the current year, rising to 2.4p in 2024, making Gemfields one of the very few firms offering inflation-busting income.

MIDAS VERDICT: With a volatile history and an uncertain future, Gemfields is not for the cautious.

But adventurous investors – or those with a penchant for precious stones – may fancy a punt at 18.5p. And the fat dividend adds extra sparkle.