Joe Biden’s campaign released a slashing video endorsement by Michelle Obama Tuesday where the former first lady denounces President Trump as ‘racist’ and says he ‘isn’t up to the job.’

‘Racism, fear, division — these are powerful weapons and they can destroy this nation if we don’t deal with them head on,’ she says in the 24–minute video, called a ‘closing argument,’ where she speaks directly to the camera.

‘Let’s be honest, right now our country is in chaos because of a president who isn’t up to the job,’ says the popular former first lady, who also delivered an emotional pitch for Biden by video at the Democratic National Convention.

The Biden camp dropped the video Tuesday morning, just after Trump returned to the White House from Walter Reed hospital, and immediately resumed attacks on his own political rivals.

Biden is surging in national polls, but his campaign remains concerned that its path to victory needs to juice turnout, to secure a White House victory and a Democratic Senate majority, and also to deliver a margin convincing enough that claims Trump is making of ballot fraud are not seen as credible.

Both the Obamas are seen by the Biden campaign as formidable assets – particularly Michelle, for her ability to connect to female and black voters, and to communicate as a mother and someone who has repeatedly spoken of her dislike for politics.

She used the video to acknowledge that claims of ‘white privilege’ have hurt ‘left-behind voters’ in rural and rust-belt areas – precisely the kinds of voters who backed her husband then voted for Trump. Reclaiming them would likely hand Biden the White House.

The former first lady’s video message represents her most significant intervention yet in the campaign.

Obama married together her attacks on Trump’s ‘racism,’ with commentary on protest movements and blistering reviews of Trump’s handling of the coronavirus.

‘The stakes are on display every day, not just in the headlines, but in our families,’ she said.

She slammed his ‘relentless pressure’ to reopen schools ‘without plans for the safety of teachers and students’ using her experience as a mother to connect with the suburban mothers whose votes Biden needs to win.

Imagine how it feels to wake up every day and do your very best to uphold the values that this country claims to holds dear — truth, honor, decency — only to have those efforts met by scorn, not just by your fellow citizens, but by a sitting president.

‘Our daughters are in college now and luckily they are taking classes from home this semester,’ she said, but said other students are ‘quarantined alone in dorms,’ and cut off from their families.

She tied the Obama daughters’ generation’s experience to Trump saying: ‘We simply cannot trust this president to tell the truth about anything.’

Obama spoke of chaos for school-age children and their parents, and said: ‘Months into crisis, this is still where we are with no clear plan and no peace of mind.

‘The worst thing is that it didn’t have to be like this.’

She said the blame lay with ‘a man who lied to us – who did not tell us how deadly this virus is, but told us it would just disappear.’

‘MISSING IN ACTION’ SLAM ON TRUMP

Obama then accused Trump of having ‘knowingly exposed  his own supporters to the virus,’ and said the death toll exceeded all military deaths since World War II and said: ‘Our commander in chief has been missing in action.’

The former first lady then linked Trump’s handling of the virus to his approach to protests in which have roiled the country since the police killing of George Floyd in Minneapolis.

‘When Americans of all backgrounds peacefully protest police violence, he disparages them, yet eggs on heavily-armed militias,’ she said.

‘When our heroic young men answer the call and heroically give their lives for their county, he called them suckers and losers and publicly mocks Gold Star families and prisoners of war.

‘All this from someone who as a wealthy and connected young man avoided military service.’

Obama decried Trump’s ‘incompetence’ but pivoted to praising the American spirit – a conscious echoing of the Biden campaign’s pledge to ‘heal the soul of America.’

Biden, she said, was a president who could united the country, while she accused Trump of using the presidency to ‘enrich himself and his family,’ and aid his ‘wealthy friends by cutting taxes for the rich and big corporations and cutting regulations that protect regular families from getting taken advantage of by people like him.’

Obama called Biden ‘the kind of leader our nation deserves,’ and ‘a leader who will help heal this nation and instead of tearing people apart, he will  bring people together’ and called the election ‘a start for a fresh start, or four more years of this.’

But then she opened her argument beyond politics – and acknowledged that claims of ‘white privilege’ have insulted and frustrated ‘left-behind’ communities, a pointed contrast to more liberal figures in the Democratic party – and a call designed to resonate in rural and rust-belt parts of states such as Pennsylvania, Ohio, Wisconsin, Michigan and Iowa which voted for her husband but then backed Trump.

You’ve lost your farms and your livelihoods, you’ve seen your beloved towns shattered by joblessness, you’ve watched families destroyed by drug addiction and mental health challenges. It is frustrating to hear some folks say that you’ve been the beneficiary of privilege, that the color of your skin gives you a head start

‘Let’s be very real. America is divided right now,’ she said. ‘And a lot of people are being sold lies from people who want to get rich or stay in power or sometimes both.

‘Let’s think about it – you’ve worked hard all your life and for too long you’ve watched the rich get richer. You’ve lost your farms and your livelihoods to corporate greed, you’ve seen your beloved towns shattered by joblessness.

‘You’ve watched families destroyed by drug addiction and mental health challenges, all of this long before this virus hit.

‘And it is frustrating to hear some folks say that you’ve been the beneficiary of privilege, that the color of your skin gives you a head start.

‘That is the reality for far too many hard-working, decent Americans.’

‘TRUMP THE RACE-BAITER AND CHAOS AGENT’

‘Right now the president and his allies are trying to tap into that frustration and distract from his breathtaking failures by giving folks someone to blame other than them.

‘They’re stoking fears about black and brown Americans. Lying about how minorities will destroy the suburbs. Whipping up violence and intimidation.

‘And they’re pinning it all on what’s been an overwhelmingly peaceful movement for racial solidarity.’

She continued: ‘So what the president is doing is once again patently false. It’s morally wrong. and yes, it is racist. But that doesn’t mean it won’t work. Because this is a difficult time, a confusing time, and when people hear these lies and crazy conspiracies repeated over and over again, they don’t know what to think.’

She said ordinary people ‘don’t have time to check falsehoods being spread throughout the internet, and even reasonable people might get scared.’

PERSONAL TESTIMONY ON RACE BY DAUGHTER OF SOUTH SIDE CHICAGO

‘As a black woman who has, like the overwhelming majority of people of color in this nation,  done everything in my power to live a life of dignity, and service, and honesty, the knowledge that any of my fellow Americans is more afraid of me than the chaos we are living through right now, well, that hurts,’ she said. 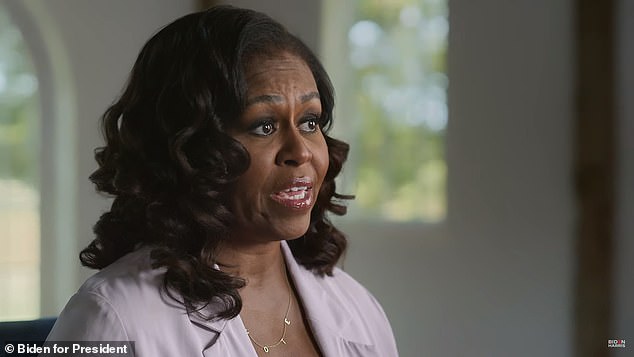 The former first lady speaks for 24 minutes in the film, speaking directly to the camera with occasional cutaways 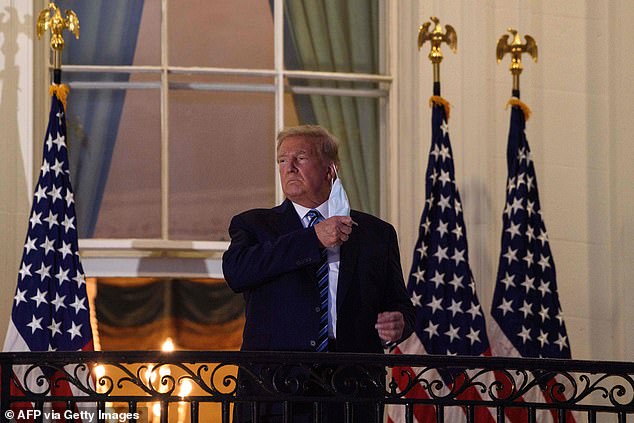 ‘Imagine how it feels to wake up every day and do your very best to uphold the values that this country claims to holds dear — truth, honor, decency — only to have those efforts met by scorn, not just by your fellow citizens, but by a sitting president.’

Obama said the ‘one thing this president is really really good at is using fear and confusion and spreading lies to win.’

She concluded with a plea for Americans to ‘search your hearts, and your conscience, and then vote for Joe Biden like your lives depend on it.’

She urges undecided voters ‘to think about all those folks like me and my ancestors’ and consider what it’s like ‘to walk around your own country scared that someone’s unjustified fear of you could put you in harm’s way.’

The video came a day after a batch of states closed voter registration – and as yet another national poll showed Biden running up a large lead over the president.

She blamed Trump for failing to develop a plan to contain the virus, amid daily reports of his own aides and advisors, as well as U.S. senators, contracting COVID-19.

‘Seven months later, he still doesn’t have a plan for this virus,’ she said.

‘Seven months later, he still won’t wear a mask consistently and encourage others to do the same — even when those simple actions could save countless lives. Instead, he continues to gaslight the American people by acting like this pandemic is not a real threat.’

She explained the video to her followers on social media, writing: ‘The truth is, the events of the past few days are a bracing reminder of the tragedy that has been this administration’s response to this crisis.

‘And I’ll be very honest: This is a message I’d planned to release earlier, and after everything that’s happened, I weighed whether or not to go public at all. But I wanted you all to hear what’s been on my mind.’

‘Because the fact is that the drama of the past few days has only emphasized what’s at stake in this election — from the coronavirus to a constant drumbeat of fear, division, and chaos that’s threatening to spiral out of control.

‘There’s only one way we can pull ourselves out: By voting for my friend Joe Biden, who’s got the heart, the experience, and the character to lead us to better days.’

‘So I hope you’ll watch, and I hope you’ll share this video with everyone you know who might still be deciding how or if they’re going to vote.

‘And more than anything, I hope you’ll vote for Joe with power, with passion, and with a love of this country that cannot possibly be denied,’ she wrote.