Director Michael Moore blasted Donald Trump as a ‘professional liar’ Friday as he claimed the president was faking having coronavirus to get ahead in the election.

The left-wing activist, 66, went on a lengthy rant on his Facebook page in which he said Trump was pretending to have COVID-19 to win sympathy amid his dwindling poll numbers, or attempting to have the election day pushed back from November 3.

He finished the post by admitting that Trump ‘probably does’ have COVID-19 but said the president had to stay alive to answer for his handling of the coronavirus pandemic.

Trump, 74, was admitted to Walter Reed Military Medical Center for COVID-19 treatment on Friday after an advisor said that he had ‘trouble breathing’.

Director Michael Moore posted a lengthy conspiracy theory on Facebook Friday in which he claimed that Donald Trump does not have coronavirus, despite the president’s hospitalization that evening. Pictured, Moore attends the 6th Annual DOC NYC Visionaries Tribute in 2019

He and First Lady Melania Trump announced that they had tested positive on Twitter in the early hours Friday morning but the president was said to have later developed a fever, cough and congestion.

Moore remained skeptical, however, that the White House and Trump were revealing the truth about his condition.

The ‘Fahrenheit 9/11’ director claimed that the president was guilty of too many lies to be taken seriously about his coronavirus diagnosis.

‘There is one absolute truth about Trump: He is a consistent, absolute, unrelenting, fearless, and professional liar. A serial liar. A factually proven liar,’ Moore wrote.

‘How many lies now has the Washington Post proven in these four years? 25,000? A lie at least twice during every waking hour? Think of all the bad people you’ve known in your life. Even the worst ones you couldn’t say that about.

‘Why on earth would we believe him today? Has he earned your trust now?’ he questioned.

Moore added that he believed Trump had previously lied about his health and medical problems.

‘Trump has a history of lying about his health. His longtime New York doctor, Dr Bornstein, admitted a few years ago that Trump dictated his perfect ‘doctor’s letter’ during the 2016 campaign,’ he alleged.

‘Then there was the White House doctor who said Trump could live “200 years!” What about his lying about that emergency trip to Walter Reed “to complete his physical?”‘ 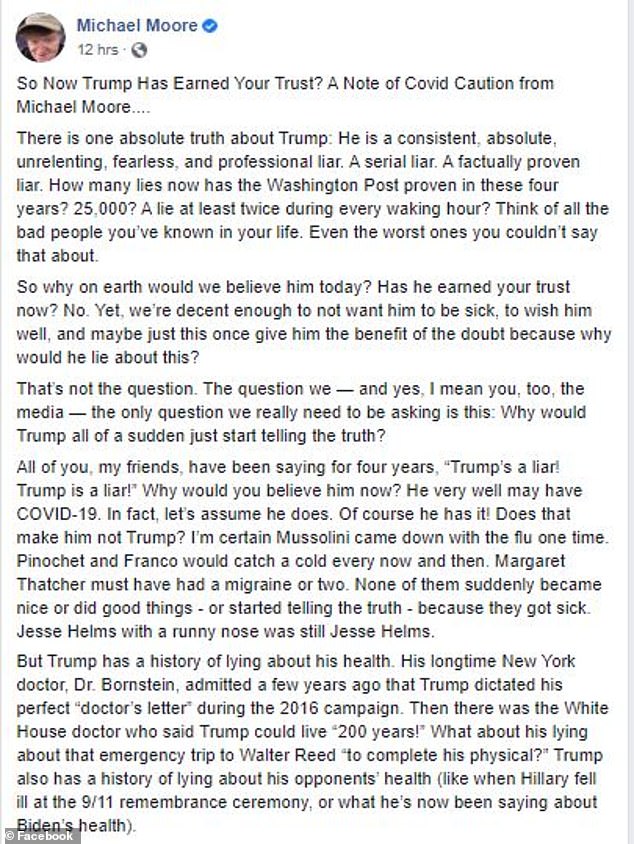 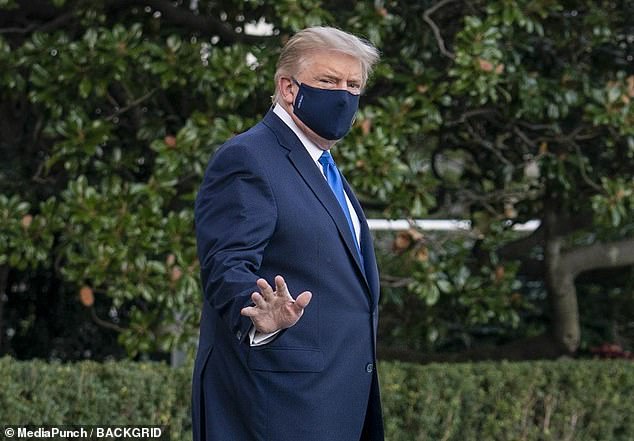 Moore claimed that Trump was using a COVID-19 diagnosis as an excuse to try and postpone the election. Pictured, Trump walks to Marine One to be transported to hospital Friday

Moore continued to cite the reasons why he believed the president is lying.

The vocal anti-Trump activist said that he thought it was a scheme to postpone the election as polling shows him continuing to fall behind rival Joe Biden.

He branded Trump an ‘evil genius’ who was ‘canny’ and ‘clever’ in ‘weaponizing this’.

‘Democrats, liberals, the media and others have always been wrong to simply treat him as a buffoon and a dummy and a jackass. Yes, he is all those things. But he’s also canny. He’s clever. He outfoxed Comey. He outfoxed Mueller. He outfoxed 20 Republicans in the GOP primary and then did the same to the Democrats, winning the White House despite receiving fewer votes than his opponent,’ Moore said.

‘He’s an evil genius and I raise the possibility of him lying about having COVID-19 to prepare us and counteract his game. He knows being sick tends to gain one sympathy. He’s not above weaponizing this.

‘But most dangerously, HE MAY USE THIS TO PUSH FOR DELAYING/POSTPONING THE ELECTION. The constitution does not allow for this, but he doesn’t give a f**k about the constitution. He and his thug Attorney General Barr have no shame and will stop at nothing to stay in power. He may even use this as an excuse for losing,’ Moore continued.

‘Then there’s this: He may use his Covid as a pretext to drop out of the race and move Pence to the top of the ticket. Pence would temporarily become President, and then Pence could pre-emptively pardon Trump for all of his crimes.’ 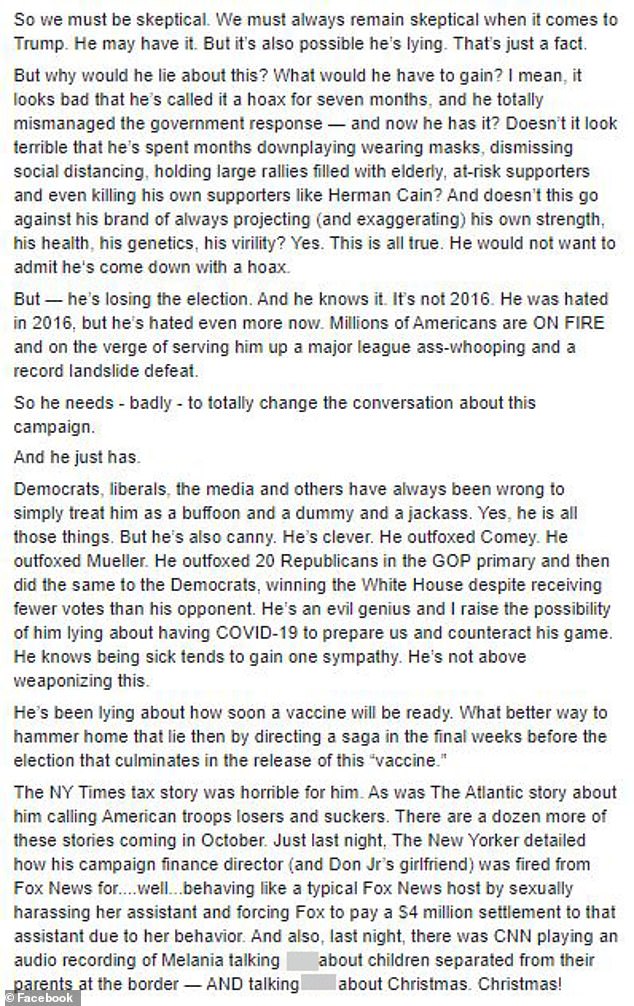 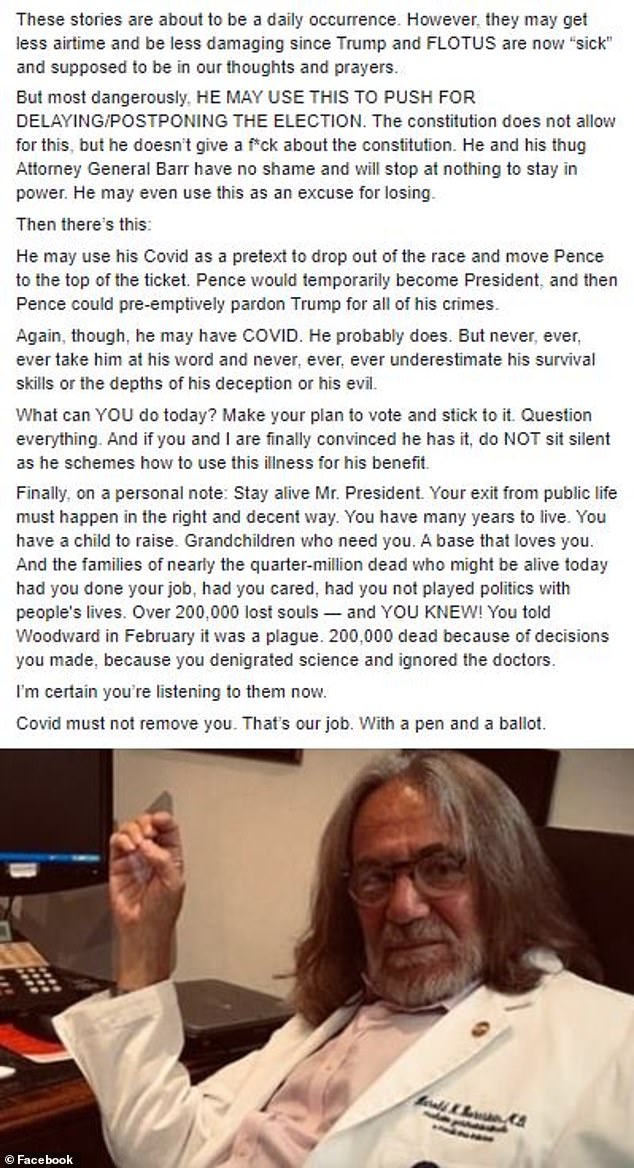 Moore finished the rant by pulling back on his skepticism and saying that Trump’s positive coronavirus test may be true, urging the president to ‘stay alive’.

‘Finally, on a personal note: Stay alive Mr. President. Your exit from public life must happen in the right and decent way. You have many years to live. You have a child to raise. Grandchildren who need you. A base that loves you,’ Moore wrote.

‘And the families of nearly the quarter-million dead who might be alive today had you done your job, had you cared, had you not played politics with people’s lives. Over 200,000 lost souls — and YOU KNEW! You told Woodward in February it was a plague. 200,000 dead because of decisions you made, because you denigrated science and ignored the doctors.’

The White House said that Trump would remain in the hospital for ‘a few days’ where he would undergo tests. He would continue to work from the presidential suite, they added, which comes with its own conference room and an office for Trump’s Chief of Staff Mark Meadows.

A Trump advisor told CNN Friday that there was ‘reason for concern’ as the president’s symptoms were regarded as ‘serious’ but White House officials said there was no reason for the public to be worried.

At least six people who were in attendance at the Rose Garden event nominating Amy Coney Barrett to the Supreme Court last Saturday have now tested positive: President Trump, the first lady, a senior White House aide, two Republican senators who sit on the judiciary committee and the head of the University of Notre Dame.

Just before Trump and Melania were diagnosed, White House aide Hope Hicks, who had traveled with the president this week, tested positive.