A World Cup-winning captain, the man who orchestrated an Ashes whitewash and the only Australian to score Test centuries on his home and away debuts and a four-time Allan Border Medal winner.

From a cricket standpoint, it would be fair to argue that not only did Michael Clarke live up to expectations bestowed on him as a generational talent, he perhaps exceeded them.

But while the Australian will statistically go down as one of the greats of the modern era, he hasn’t earned the near-universal love reserved for some of his contemporaries.

From bursting onto the scenes with bleached blonde hair and a big earring to dating a model, Clarke did not fit the stereotype many cricket fans had of a kid from Sydney’s working-class suburb of Liverpool.

And his heated clash with TV host Karl Stefanovic in a Sunshine Coast park earlier this month after he was accused of cheating on girlfriend Jade Yarbrough is the latest entry in a list of bizarre off-the-field incidents that have polarised public opinion.

Here, Daily Mail Australia takes a look at some of Clarke’s most controversial moments.

Clarke went from newspaper sport pages to the front pages when he started dating Lara Bingle in 2007.

The combination of the clean-cut face of Australian cricket and the covergirl was Australian’s version of Posh and Becks.

Clarke and Bingle were engaged in early 2008 and later that year he copped flak for pulling out of Australia’s tour of the West Indies to attend her father’s funeral.

Ungenerous as the criticism was, it spoke volumes for how Clarke had come to be regarded by some in Australia.

The country’s cricketers were meant to be hard-nosed characters like Ricky Ponting and Justin Langer or flamboyant, devil-may-care larrikins like the late, great Shane Warne. 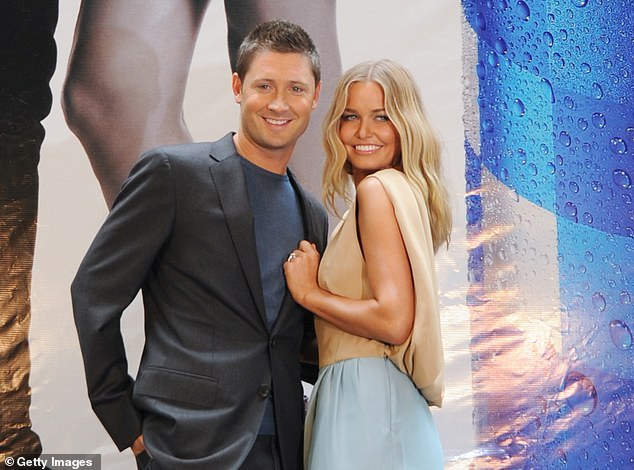 Clarke and Lara Bingle dated from 2007 to 2010, when he broke off their engagement

With his penchant for wearing the latest fashion and spending $300,000 on an Aston Martin for his girlfriend, Clarke never quite won the hearts of the nation like some of his colleagues did.

His relationship with Bingle eventually ended in March 2010, when a picture of her in the shower taken by then-AFL star Brendan Fevola was leaked and went viral.

Clarke left Australia’s tour of New Zealand to return home and break the engagement, before rejoining his teammates and making a brilliant ton.

Predictably, however, he was criticised for leaving the tour in some quarters – and blasted for returning to New Zealand in others.

Diamonds are not forever

After breaking up with Bingle, Clarke had to confront rumours that he flushed her $200,000 engagement ring down the toilet of his Bondi pad.

Absurd as the suggestion may have been, plumbers, perhaps spotting the opportunity for a canny marketing stunt, even appeared at the $6million complex.

Clarke, however, has always maintained the rumors were complete ‘bulls**t’.

‘I’d like to say I’m a very silly man. But I’m not that silly. I’m not throwing any diamond ring down a toilet,’ he said during an interview with 60 Minutes in 2016. 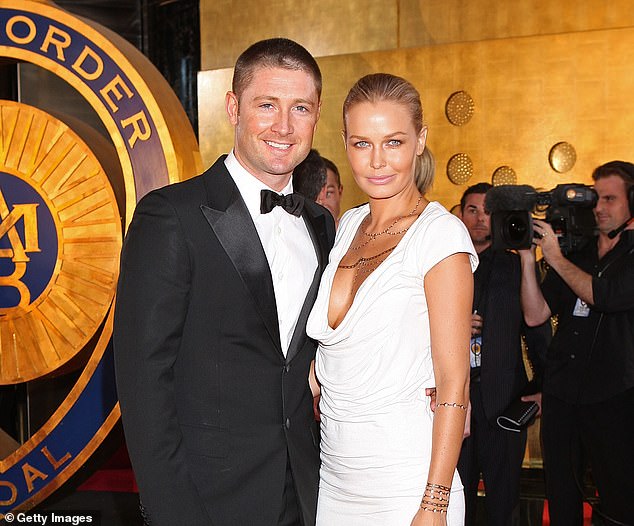 Clarke and Bingle at the Allan Border Medal ceremony in February 2010. The couple broke off their engagement just a month later

The last Test of the 2009 series against South Africa at the SCG should be remembered as Matthew Hayden’s final appearance for Australia. Or for Graeme Smith batting with a broken hand as the Proteas became the first team to win a Test series in Australia for 15 years.

But both were overshadowed by an ugly confrontation between opening batter Simon Katich and Clarke, who made a brilliant 135 in the first innings, in the dressing room.

Clarke lashed out in frustration at the delays over the performing of Under the Southern Cross I Stand because he had other plans away from the team – and Katich grabbed him by the throat as the confrontation escalated. 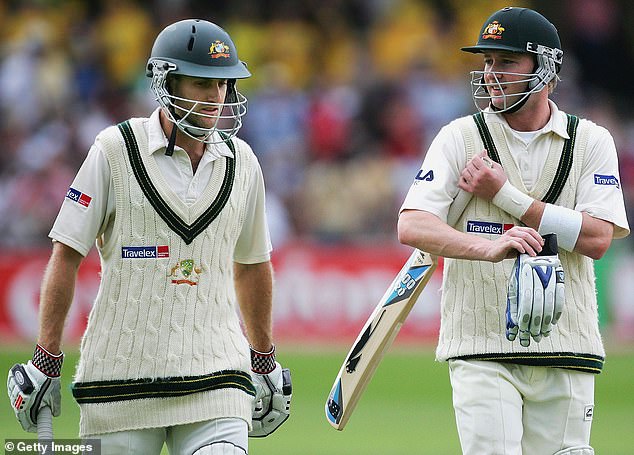 It highlighted just how different Clarke was from the likes of Katich, who was an old-school, blue-collar cricketer.

A month later, it emerged Clarke was anxious to leave the SCG as he had a booking at a bar to celebrate the end of the Test summer.

The details of the confrontation were only laid bare in 2016, when Clarke told his version of events in his autobiography.

In it he claimed Katich and Michael Hussey, who was then in charge of the team song, orchestrated the delay to deliberately annoy him and spoil his plans. 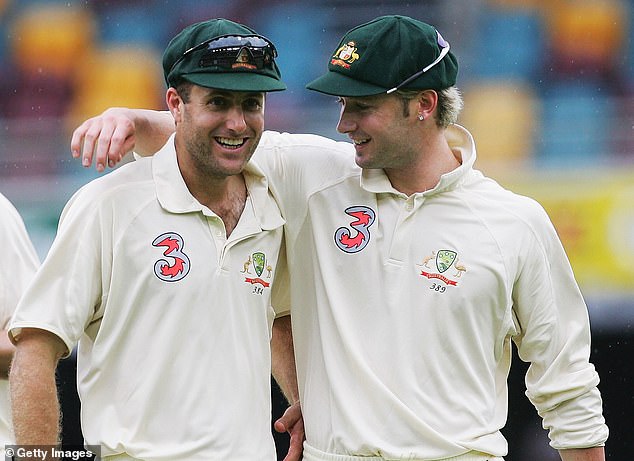 ‘Huss [Hussey] and ‘Kato’ [Katich] seem to be enjoying the delay more and more, particularly at my expense,’ Clarke wrote.

‘I think I hear them say something like: ‘F***it, let’s make him wait a bit longer’. And then I lose it.

‘Hang on, you’re doing this out of spite, you f***ing dogs. Have the balls to say it to my face. Kato fires up: ‘What did you say?’

Colourful language wasn’t exclusively reserved for Clarke’s teammates, either. In the opening Test of the 2013-14 Ashes series at the Gabba, Clarke warned England’s Jimmy Anderson to expect a vicious welcome at the crease.

‘Face up, then. Get ready for a broken f*****g arm. Face up,’ came the warning from the then-Australia captain, which was picked up by the stumps mic.

Clarke’s confrontational approach may have got the juices flowing among admirers of hard-nosed Aussie cricket, but he later revealed he regretted the episode. 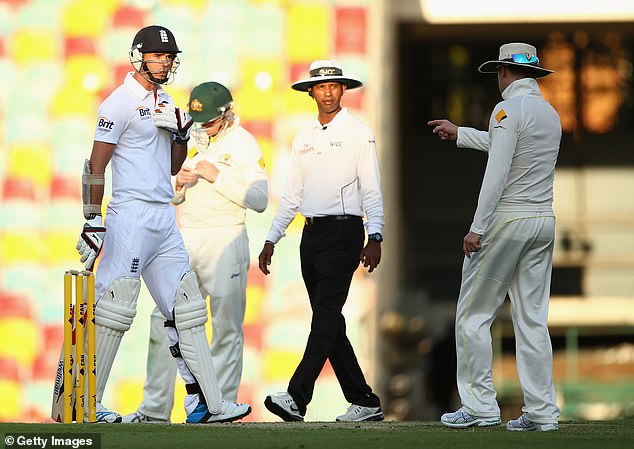 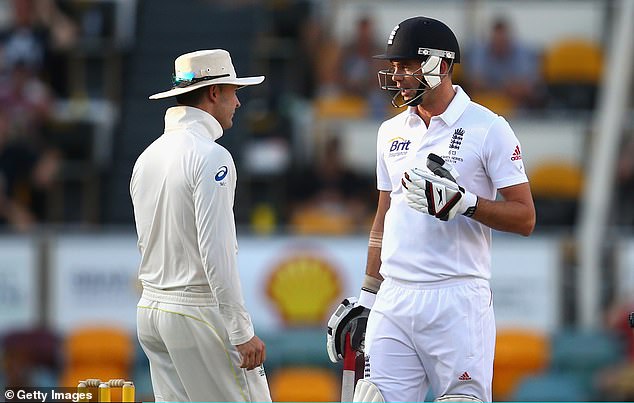 Clarke warned Anderson to ‘get ready for a broken f***ing arm’, but he subsequently admitted he regretted the language he used

‘I regret the language I used and I regret that I said it over the stump mic,’ he said in 2014.

‘I think it’s unacceptable that the Australian cricket captain is setting that example.’

Threatening to hand back the baggy green

If Clarke’s attitude off the field often proved divisive, his approach on the field could be just as polarising.

Shortly after making his debut, the Sydneysider even threatened to hand back his baggy green after being asked to field at bat-pad in place of Justin Langer.

‘We needed someone and usually it goes to the youngest in the side. He [Clarke] said: ‘If I have to wear that [the helmet at bat-pad], I will hand my baggy green back’.

‘In hindsight we should have said: ‘Mate, that’s exactly what will happen, we will have your baggy green back and that’s the way it will roll.’ 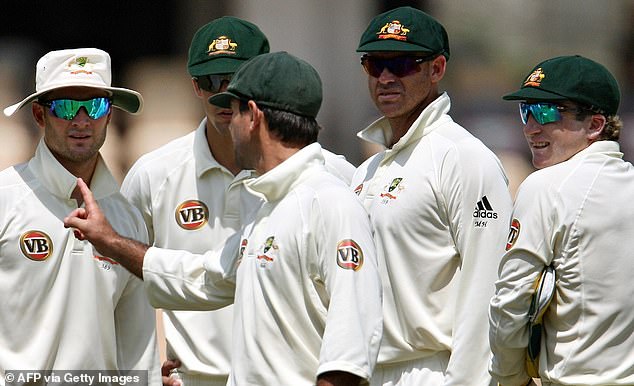 ‘Pup’ had looked like Australia’s captain-elect since making his Test debut and he eventually took on the mantle in 2011 when Ricky Ponting stepped down.

Clarke won 24 of his 47 Tests as skipper and his captaincy was a roller-coaster. If the high point was a whitewash over England in the 2013-14 Ashes, there were plenty to low points to choose from.

Australia lost the Ashes in England in 2013 and 2015, with Clarke criticising the attitude of some players on the former tour as a ‘tumour’.

A 4-0 thrashing in India in 2013 came as Clarke and then-coach Mickey Arthur suspended four players, including Mitchell Johnson, in what became known as the ‘homework saga’. 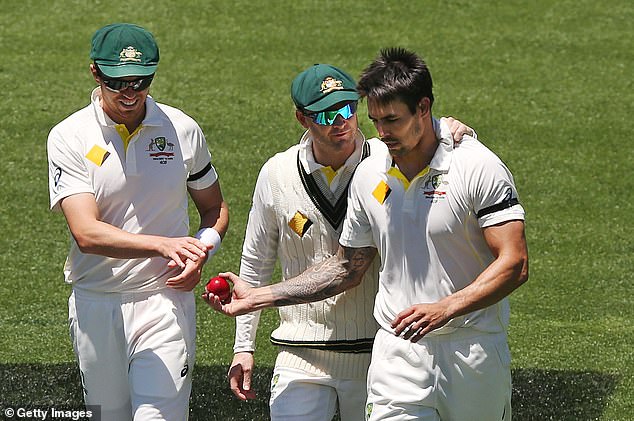 Speaking in 2016, the former Aussie quick revealed just how badly the atmosphere soured under Clarke.

‘It wasn’t a team. There were different little factions going on and it was very toxic,’ he said in 2016.

‘It wasn’t a very enjoyable place to be and you’re supposed to be enjoying yourself when you’re playing for your country.

‘It was a pretty bad experience, bad time, a couple of us didn’t want to play.’

Shortly after Clarke took over the captaincy in 2011, Katich was surprisingly cut from the list of Cricket Australia’s centrally contracted players.

The opening batter had been a rock for Australia, averaging 50.48 in 33 Tests at the top of the order, and he pinned his demotion to the 2009 fracas at the SCG.

‘You don’t have to be Einstein to figure out that it’s not just the selectors that had a part in sending me on my way,’ he said in a thinly veiled dig at Clarke in 2011. 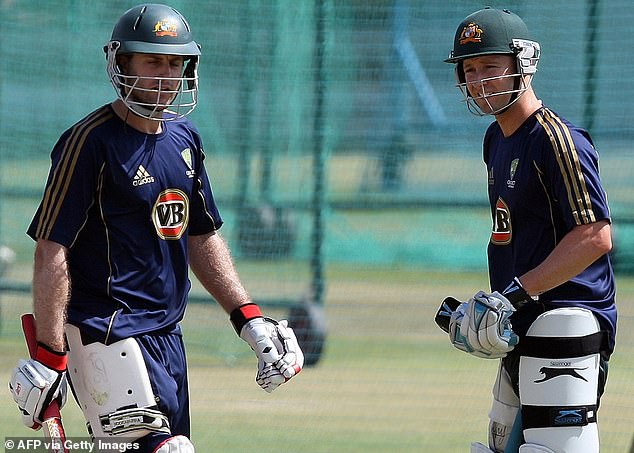 The latter, however, has always maintained he played no role in Katich getting bumped down.

‘I have no say in who gets a contract,’ he said on the Big Sports Breakfast two years ago.

‘Simon Katich was not dropped from a team when I was captain of Australia or when I was a selector.’

Clarke has moved into broadcasting after retiring and hosts the Big Sports Breakfast on Sky Sports Radio. But he has lost none his fiery attitude despite swapping the whites for the booth, as a spat with veteran NRL journalist Phil Rothfield last year showed.

Clarke cricitised referee Ashley Klein’s handling of the brutal elimination final between the Sydney Roosters and South Sydney, only to be told to keep his opinion to himself as ‘you know nothing about rugby league’.

Clarke fired back: ‘You know everything because you played 100 Test matches? Continue,’ he said.