Michael Carrick walked alone to the Manchester United fans housed high in the Estadio de la Ceramica before offering a one-fisted salute, and was met with a chorus we haven’t heard for a while.

‘Oh, it’s Carrick you know,’ they sang. ‘Hard to believe it’s not Scholes.’

If that was music to Carrick’s ears, then what about Paul Scholes?

Trust Scholes to say it how it is before his former teammate’s managerial debut last night, three days on from the sacking of Ole Gunnar Solskjaer.

‘I would be embarrassed being on the staff now, they should all have gone – sacked or gone off their own back,’ said Scholes before kick-off. ‘They have let the club down as much as Ole has.’

It’s a sentiment known to be shared among some of the players, and one reason why Carrick faced a difficult night here after what has been a difficult few days for the club.

That he came away with a 2-0 win deserves great credit, even though it took a functional United performance and two late goals to achieve it. 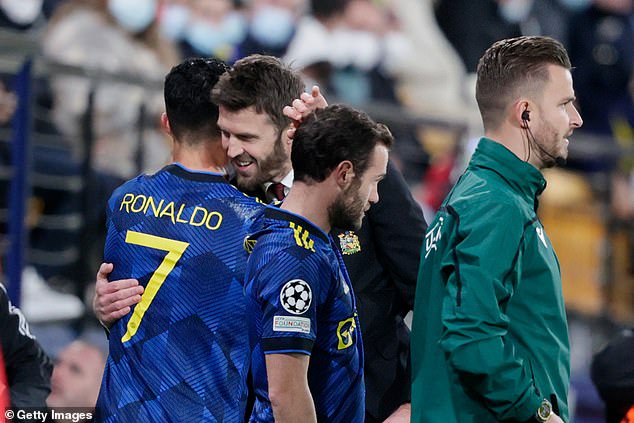 For 78 minutes it remained deadlocked but even a goalless draw wouldn’t have been the worst outcome. Just ask Sir Alex Ferguson. He had four of them on each occasion he came up against the team they call the Yellow Submarine.

Carrick, who played in the last of those games here in 2008 when United were European champions and on course for back-to-back appearances in the final, has gone one better with his first stab at management. The clean sheet was an added bonus, only United’s third of the season.

No wonder he turned to hug Mike Phelan after Cristiano Ronaldo made the breakthrough, and then embraced Darren Fletcher and Kieran McKenna when Jadon Sancho scored a late second.

Solskjaer couldn’t get a tune out of United’s £73million summer signing, so it was perhaps significant that Carrick’s first game produced Sancho’s first goal for the club.

The 40-year-old had raised eyebrows in his pre-match press conference by admitting that his is a similar style to Solskjaer, so what type of caretaker was Carrick going to be? 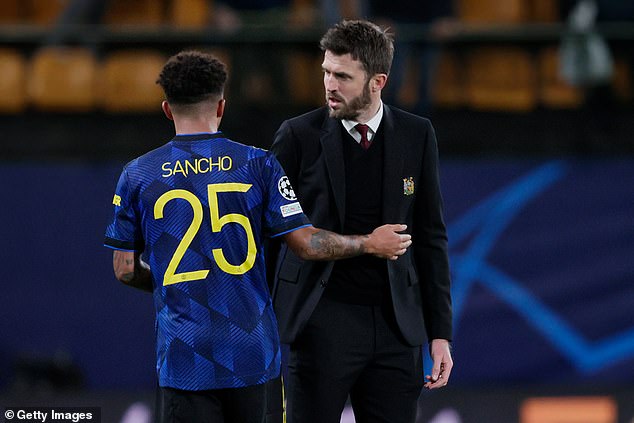 A seat-warming, sit-on-your-hands stop-gap happy just to mark time, or the seize-the-day, can-do kind of guy who wants to make the most of his limited opportunity?

The answer to that question arrived at the same time as Carrick’s first team sheet an hour before kick-off.

Bruno Fernandes dropped for the first time in his United career, as opposed to rested, and the No.10 role in the usual 4-2-3-1 formation handed to Donny van de Beek on his first start in more than two months.

Carrick knew how that would be interpreted. Fernandes was practically untouchable under Solskjaer while poor Van de Beek seemed almost unplayable much to the bemusement of his teammates, a £40million Dutch misfit.

Solskjaer often spoke about how difficult it was to leave out Fernandes because he was so keen to play, but that is what managers are paid to do – even caretaker ones.

The Portugal playmaker has been sub-par in recent weeks and deserved dropping to the bench last night. Van de Beek, on the other hand, deserved his start if nothing else for being the only bright spark in Solskjaer’s last stand at Watford on Saturday when he made a goal scoring appearance off the bench. 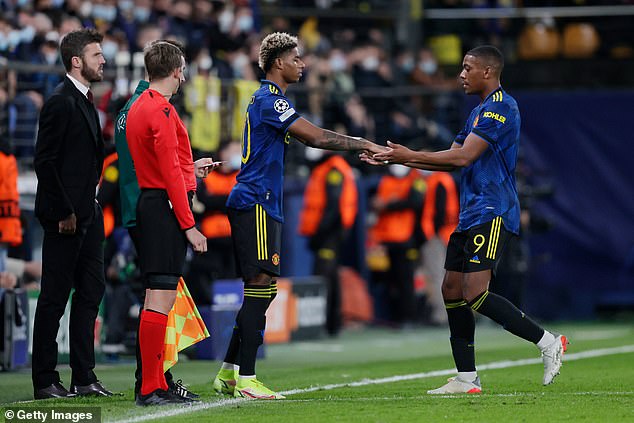 ‘I love Bruno, he’s a fantastic player and a good person,’ said Carrick beforehand. ‘He ran his socks off on Saturday, but this is the team I’ve picked.

‘Not one of the players has been at their best, there’s no hiding from that but there’s a team to be picked.’

Frankly, he could have dropped them all after Watford. Not to have made changes would have been ridiculous.

Did his one big decision work out? Not completely. Neither did Carrick’s other bold call in giving Anthony Martial only his fourth start of the season in place of Marcus Rashford.

But when change was needed in the 66th minute, he reversed both moves by bringing on Fernandes and Rashford, and it helped to turn the game in United’s favour.

Ronaldo, who started on the left in another departure from the Solskjaer play book, was gifted the first goal but Fernandes and Rashford were both involved in the second. Victory secures a safe passage from Group F and a place in the knockout stage.

Carrick, dressed smartly in a suit and tie, spent almost the entire match stood on the touchline, unlike Soskjaer who was happy to let his coaching staff take turns in the technical area.

At the end, he strode onto the pitch to congratulate the players before heading towards the fans.

Whatever happens with United’s rather convoluted search for Solskjaer’s successor, Carrick will always have this.