By Ruth Bashinsky For Dailymail.Com

A Miami dog owner who dyed his puppy red and yellow to resemble the Pokemon character Pikachu and showed it off at the Miami Heat basketball game is now getting some heat himself.

Owner Erik Torres was seen in a video proudly holding his colorful furball named Zaza at the Monday night game, catching the attention of one of the commentators who said: ‘I don’t think that dog signed off on that paint job,’ 7News Miami reported.

Many called the bizarre stunt animal abuse and the pet owner was slapped with a $200 fine for violating Miami-Dade County Ordinance 5-12A, which states it’s illegal to be in possession of any dyed or artificially colored animal.

Torres said he did not dye Zaza himself but sent the family pet to California for the makeover, a surprise for his young daughter who is a huge Pokemon fan.

He claimed that he did his homework beforehand and used a dye that was safe for dogs and horses. He also said that he was not aware he was doing anything unlawful.

‘I did my research, and I knew that in no way or form would this affect my animal, my dog,’ he said.

Zaza seen here with brightly colored yellow and red dye to resemble the Pokemon character Pikachu. The owner said his young daughter is a big fan of the cartoon character 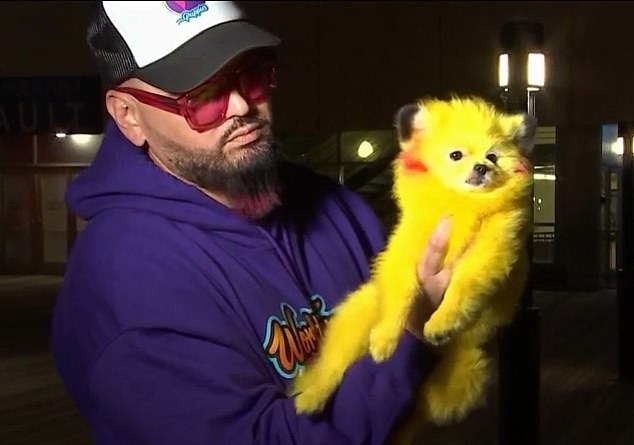 Dog owner Eric Torres is also the owner of World Famous Puppies, a puppy store in Doral, Florida. After the stunt went viral Torres was slapped with a $200 fine city officials

Since the store opened Miami-Dade Animal Services said they have issued 16 citations against the store with many of those citations stemming from customer complaints alleging the sale of sick dogs.

Torres disputed those claims and said he does what he can to keep the dogs healthy.

He was already on the city officials’ radar after a complaint came in from a customer who purchased a dog from Torres’ shop, which the customer claimed was sick.

During an inspection at the store on December 21st, Miami-Dade Animal Services spotted Zaza.

‘Pikachu was in the store,’ said Kathleen Labrada, assistant director of Miami-Dade Animal Services. ‘There was a staff member holding the dog in her lap. We obtained a photograph at that time.’

Labrada told NBC 6 it is ‘unlawful for any person to possess, sell or otherwise transfer within the County any dyed or artificially colored rabbit or other animal.’

A few days after the initial inspection at World Famous Puppies, on December 28th, the County told Torres they would be issuing a citation.

Torres – who was surprised by all the backlash he received – stands by his actions.

‘We live in a free country, and if they feel a certain type of way, they can go ahead and do research, just the same way I did, and understand what happened and where this dye came from,’ he said.

He said the dye should grow in about six months.

A Miami-Dade Animal Services spokesperson told 7News Miami they were not planning to remove Zaza from Torres. 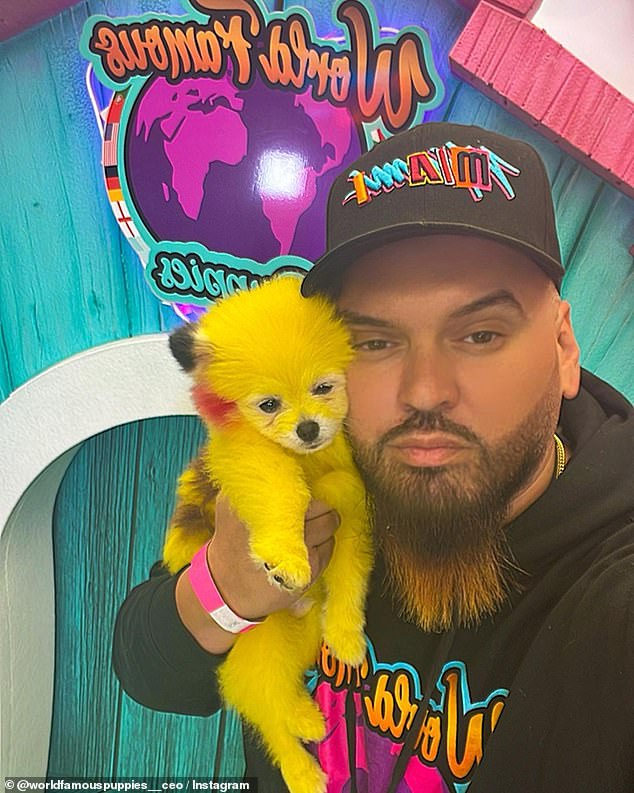 Torres nuzzling his furball Zaza after her dye job that caught the attention of many dog lovers who criticized the pet owner claiming it was ‘animal abuse,’ but Torres said he did his homework and research beforehand to ensure nothing would be harmful for his pup 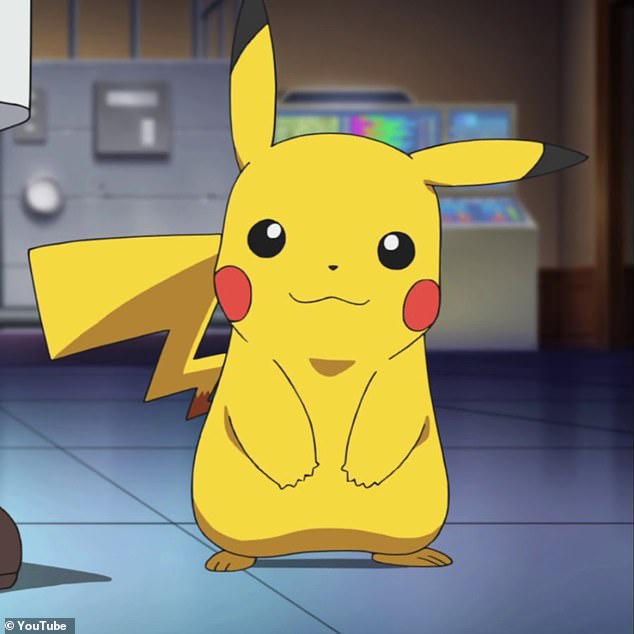 Pikachu is a fictional species in the Pokémon media franchise. The character is described as a short, and chubby rodent that has yellow fur with two horizontal brown stripes on its back with a small mouth and long ears