Terrorists are hunting for fresh targets because the coronavirus crisis means there are fewer crowds, says MI5 chief as he warns China is the UK’s biggest long term threat

The boss of MI5 today revealed Russia causes the ‘most aggravation’ to the UK’s security services but warned it is China which represents the biggest long term threat.

Director general Ken McCallum said as of now it is activity from the Kremlin which keeps British spies the busiest when it comes to countering attempted interference from foreign powers.

But he said that while Moscow provides ‘bursts of bad weather’ Beijing is in the process of ‘changing the climate’.

Mr McCallum also warned the coronavirus crisis has prompted terrorists to hunt for new targets because there are now far fewer crowded places than there were before the pandemic hit.

He said the security services have been ‘rapidly adapting’ how they work in recent months to combat new threats because ‘big shifts in everyone’s lives’ mean there have also been ‘shifts in how our adversaries are operating’.

Speaking to reporters this morning for the first time since taking on the top role in April, Mr McCallum gave a frank assessment of the threats facing the UK.

‘If the question is which country’s intelligence services cause the most aggravation to the UK in October 2020, the answer is Russia,’ he said.

‘If on the other hand the question is which state will be shaping the world across the next decade, presenting big opportunities and big challenges for the UK, the answer is China.

‘You might think in terms of the Russian intelligence services providing bursts of bad weather while China is changing the climate.’

Mr McCallum said the threats being countered by MI5 were no longer ‘just about spies’ or ‘stealing state secrets’ with the security services also facing up to the prospect of assassination attempts and outside interference in UK democracy.

‘These risks have always been sharp in different ways but right now we see a very broad change and one of the big drivers for that is globalisation itself and the increasing reach of the internet and technology which affects us all in our joined up world,’ he said.

Mr McCallum said MI5’s work in 2020 has been ‘dominated’ by the coronavirus pandemic as he set out the work it has done to boost the UK’s domestic response to the disease. 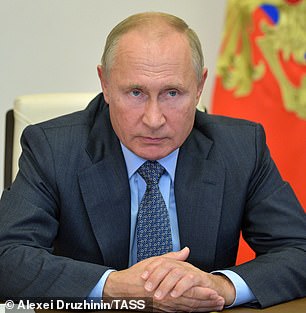 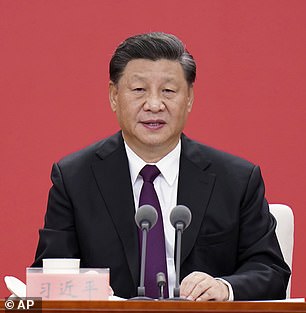 He said: ‘We’ve sought where we can to help on Covid itself – advising on the safe construction of Nightingale hospitals; repurposing research originally done on toxic chemicals to help understand how Covid in droplets might disperse in certain environments; offering our skills in data analytics and modelling; simply allowing medically-qualified MI5 officers to step away from their duties here and directly support our NHS.

‘And, crucially, on the vaccine, we’ve been working to protect the integrity of UK research.

‘Our larger task has been rapidly adapting how we perform our core role of keeping the UK safe.

‘The big shifts in everyone’s lives – reduced travel, more online, and the rest – mean shifts in how our adversaries are operating.

Mr McCallum said the pandemic had forced MI5 to change some of its tactics, explaining that ‘common sense will tell you that covert surveillance is not straightforward on near-empty streets’.

Mr McCallum, who is in his forties, became the youngest ever MI5 director general when he took over from Sir Andrew Parker, who retired after leading the organisation since 2013.

The maths degree graduate, who grew up in Glasgow, had been the deputy director general since April 2017 and has 25 years of experience at MI5 including work on Northern Ireland-related terrorism, Islamist extremism and cyber security.

His career has seen him take charge of the service’s response to the attempted assassination of former spy Sergei Skripal in the Salisbury nerve agent attack as well as leading the response to the 2017 terror attacks.

He was also in charge of counter terrorism investigations and risk management surrounding the 2012 London Olympics.