Alex Araujo would be the first to admit that there is nothing particularly racy about the fund he manages. The M&G Global Listed Infrastructure Fund is a collection of processing plants, liquefied natural gas terminals, toll roads and laboratories.

Araujo seeks out these and other solid assets that pay out a reliable income – and then holds on to them for years.

In the past few months, racy has fallen out of favour. The most thrilling investments are seeing the sharpest share price falls, as investors get nervous about businesses that are promising fabulous profits but have yet to show their worth. US tech stocks are a good example, with their value falling by about 26 per cent since the start of the year.

Today, it is steady and slow that investors are getting particularly excited about. Araujo believes that it is in this new turbulent environment of rising interest rates and volatility that infrastructure funds can really show their worth.

M&G Global Listed Infrastructure is a concentrated portfolio of 40- 50 companies that Araujo and his team believe have the potential to grow their income sustainably over the long term.

They very rarely change the make-up of the portfolio: most of the holdings in the fund have been there since it was launched in 2017. Today the £572million fund has holdings across the globe – 36 per cent in US companies, 16 per cent in Canadian, 10 per cent in UK and 9 per cent in Italian companies.

The fund has turned a £1,000 investment into £1,252 over three years and is up 8.1 per cent over the past year. Furthermore, it has a dividend yield of over 2 per cent. Araujo believes part of the fund’s success is that it invests in companies that are resilient to high inflation.

‘These companies are typically able to pass on inflation to their customers,’ he says. ‘Some are companies that directly benefit from inflation. For example, we invest in energy infrastructure that has seen its value rise as energy prices have risen.’

Araujo expects dividends from these types of energy firms to continue to grow. ‘They have reliable revenue streams coming from critical assets that we depend on day to day,’ he says. 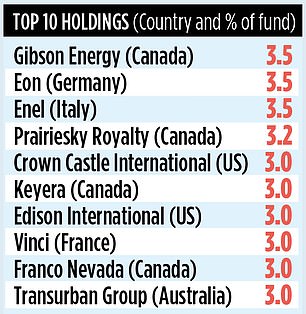 Furthermore, in response to the economic impact of Covid 19, governments around the globe committed to infrastructure projects, which will keep the sector growing even in a recession.

In the US, President Biden has committed more than $2trillion (£1.7trillion) to infrastructure programmes, while in Europe, Next Generation EU has an ambition to promote renewable energy and clean transport.

Although Araujo rarely meddles with the portfolio, he is always looking for a bargain. The market falls in March 2020 at the beginning of the pandemic were a particularly busy time as he and the team bought six new companies. One was A2A, a northern Italian multi-utility business.

Araujo says: ‘If you think back to the newsreels in Italy at that time, the military was in the streets, people were in biohazard suits, hospitals were filling up – there was real panic. But [the investment] worked out well for us.’