EXPRESS INFORMER > Travel > Mexico’s dazzling Yucatan peninsula has it all

Through the jungle towards the sea, on a day of intense sunshine and tropical rain. A mosaic of fallen leaves decorates our path and, somewhere, a peacock is cawing. All is cloaked in an agreeable humidity. Britain is a 12-hour flight away — and hurrah for that.

We come upon a clearing of neat lawn, beyond which a thatched hut is offering refreshments. We pause to examine the menu at this simple wayside halt. Yes, they really are serving Kobe beef cheeseburgers at £34 a bun and a bottle of Domaine de la Romanee-Conti for £21,329.

A ragged youth with a rucksack passed this way once. More than a quarter of a century ago, I spent a couple of months travelling down Mexico’s Yucatan peninsula, through Belize and into Guatemala.

My budget was tight, and the rooms in which I stayed were often squalid stalls. I dined on rice and beans at roadside shacks, swam in forest rivers, glimpsed Guatemala’s civil war and watched the volcanoes above Antigua bubble and spit.

Altogether, a thrilling adventure. Then I had to go home and work.

Recently, I returned to Central America to retrace the first part of that trek. This time, I went with my wife and two teenage daughters, and the budget and itinerary were adjusted accordingly.

While my wife quickly grows restless on tropical island beach holidays, our daughters adore them. The Mexican Caribbean presented a compromise: beautiful seascapes with a hinterland that offers millennia of history and culture and a sophisticated cuisine.

But would the former youth recognise his old pathways? With difficulty, at times. New temples, devoted to all-inclusive hedonism, rather than the old gods, have since risen along the shoreline, which has even gained a new name: the Riviera Maya. Not without reason.

The Riviera pivots upon Playa del Carmen, 44 miles to the south of the concrete touristopolis of Cancun, with its ever-expanding international airport. When I last came this way, Playa was a fishing port of 15,000 inhabitants; a hippy-traveller stopover with a couple of bars — or so my romantic memory claimed.

Today, it is sprawling home to 200,000 and the nightlife is varied and full-on. Spring break — when thousands of U.S. students descend on the Riviera to drink, dance and mate — is something to behold.

Throughout the year, the cruise liners stand offshore and the streets are full of Starbucks, souvenir shops and malls. Go if that’s your bag. Otherwise, seek out the relatively unbeaten tracks. They are still out there.

Our base was a secluded boutique resort within striking distance of Playa, but without being affected by its bustle.

Hotel Esencia comes with an interesting history. The central villa, Casa Grande, was once the home of an Italian duchess.

Esencia is divine. Her grace has since departed, and the 30-acre estate is now owned and being developed with impeccable taste by a New York TV mogul.

While I was schlepping the Yucatan the first time around, he was busy turning The Simpsons and Beverly Hills, 90210 into global phenomena. Today, he is transforming Esencia into a bolthole for captains of industry and showbusiness divinities — Hollywood royalty Uma Thurman and Gwyneth Paltrow have both stayed.

Lesser mortals who have scrimped and saved and forgone a new family car for a special vacation are also made very welcome. The staff are lovely.

Our air-conditioned casita looked out into the jungle canopy we shared with electric blue Yucatan jays, golden orioles, iguanas and other fauna such as the charming coatimundi.

From the white-sand beach — where teams toiled to remove the seasonal arrival of Sargasso seaweed — we body-boarded and snorkelled among blasé schools of snapper, jacks and angelfish.

On dry land, the girls fed the freshwater turtles that live in the hotel’s own cenote — one of the numerous sinkholes that are found across the Yucatan. They even rose at dawn — at dawn! — to attend yoga lessons on a platform overlooking the ocean.

I could happily have spent my days drinking £5 Corona beers (there were affordable alternatives) in the treetop Crow’s Nest bar on the beach, watching the pelicans fly by in perfect vees. But my wife was getting that restless look, and I had an historical omission to redress.

When last in Yucatan, I stopped by the exquisite seaside site of Tulum. (All but deserted then, Tulum is now hemmed in by the jet-set pleasure palaces). But I never made the two-hour trip inland to the site of the greatest of all of Mayan-era cities, Chichen Itza.

The empire reached its height between our own Dark and Middle Ages. By the time the Spanish conquistadors arrived, the civilisation had peaked and self-destructed.

Chichen Itza — a Unesco World Heritage Site — was its zenith; the Whitehall-cum-Parliament Square and Wembley Stadium of the Maya.

The vast complex of stone buildings was gaily painted and covered in intricate mosaics and reliefs of the feathered serpents, jaguars and owls that populated the Mayan pantheon of gods.

What remains is still isolated, still stupendous. The iconic structure is the Castillo temple, a step pyramid some 100 ft tall.

Across the plaza stands the Great Ball Court, where a version of the Mesoamerican ball game was played. 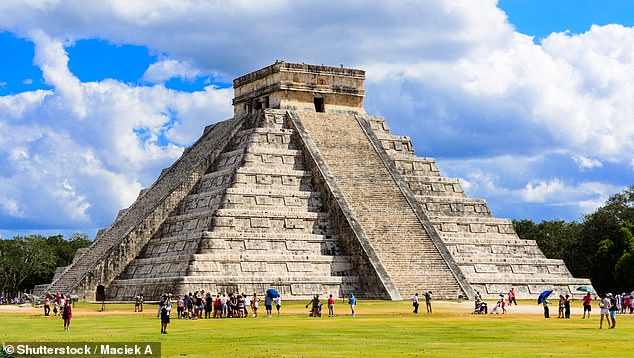 Chichen Itza, above, is a Unesco World Heritage Site. The iconic structure is the Castillo temple, above, a step pyramid some 100 ft tall

The rules and purpose of the sport remain unclear, but some murals suggest the defeated players might have been subject to execution or human sacrifice. Their modern contemporaries are merely torn apart on Twitter.

Numerous coach parties leave Cancun and Playa for the site each day.

We chose to have a private tour by Experiencias Maya. We left at dawn, and so avoided the crowds and the crushing heat of mid-afternoon. Raul, our guide, was compelling on both the world of the ancient Maya and modern Mexico.

On our way back to the hotel, we stopped in the colonial city of Valladolid, all pastel stucco prettiness, tequila distilleries (the girls posed in the obligatory ponchos and sombreros) and chocolate studios.

We had an excellent lunch at the Meson del Marques restaurant, set in a 17th-century mansion on the main square across from the sugar cake cathedral of San Servasio.

It was as one of their liveried waiters prepared guacamole at the table that the girls declared their experience of the Yucatan ‘the best holiday ever’ (although my wife was moved to remark: ‘If I never see another avocado again, I won’t be sorry.’)

I doubt the girls would have been quite so enthused by my backpacking odyssey. I doubt if I would either, now. Yucatan has changed too. One hopes it does not change too much.

Turquoise Holidays (turquoiseholidays.co.uk, 01494 678 400) offers seven nights at Hotel Esencia from £3,075 pp, based on a Jungle room, including breakfast, flights and transfers. Tours to Chichen Itza by experienciasmayas.com.