Meta is ‘freeing the nipple’ at the recommendation of its Oversight Board that determined the ban on bare breasts ‘hindered expression for women, trans, and gender non-binary people on its platforms.’

The board’s recommendation focused on Instagram’s ban of two posts by a couple, one of whom is transgender and the other non-binary, who posed topless but covered their nipples to raise awareness around top surgery.

The board said that ‘the [old] policy is based on a binary view of gender and a distinction between male and female bodies,’ which makes rules about baring nipples ‘unclear’ for those who do not identify as women.

But it also impacts women, who have long fought to desexualize images of bare breasts while arguing that men are allowed to share their bare chests.

Meta will allow bare breasts on Facebook and Instagram after its Oversight Board said the ban ‘hindered expression for women, trans, and gender non-binary people on its platforms’

The board, which is funded by Meta but operates independently, said in a ruling that the company’s adult nudity policy is based on a binary view of gender, making it unclear how the rules apply to intersex, non-binary and transgender people.

Facebook and Instagram were criticized in 2013 for removing images of women breastfeeding, but the platforms apologized for ‘the mistake’ and said it encouraged such images on their platforms.

Of the two posts that triggered the case, one from 2021 and the other from 2022, it said: ‘The Oversight Board finds that removing these posts is not in line with Meta’s Community Standards, values or human rights responsibilities. 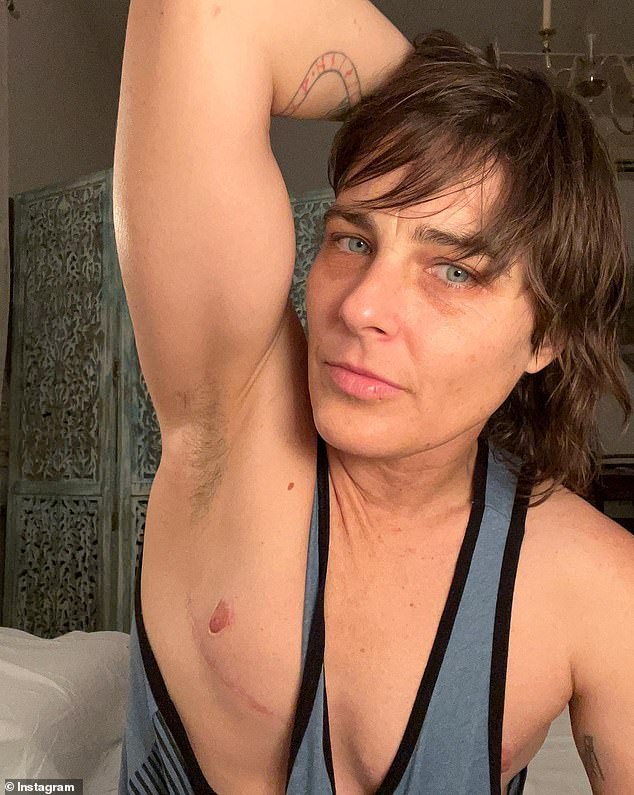 The board’s recommendation focused on Instagram’s ban of two posts by a couple, one of whom is transgender and the other non-binary, who posed topless but covered their nipples to raise awareness around top surgery. Pictured is another individual who had top surgery

‘Such an approach makes it unclear how the rules apply to intersex, non-binary and transgender people and requires reviewers to make rapid and subjective assessments of sex and gender,’ the board said.

However, the new policy to allow bare breasts has been a long time in the making.

In 2000, women took to the streets in the ‘free the nipple’ movement to desexualize images of bare breasts.

And it came about when pictures of women breastfeeding were censored or flagged as nudity.

The movement gained traction in 2013 after Facebook removed clips from the actor/director Lina Esco’s documentary Free the Nipple, which sparked protests outside of Facebook headquarters.

And many women argue that, while hate speech goes uncensored, their nipples are flagged as ‘dangerous’.

CEO Mark Zuckerburg tried to justify this in 2018 saying: ‘It’s easier to build an AI system to detect a nipple than what is hate speech.’

Meta was recently criticized for banning professional nude photography by activists who stated the images are art.

In 2020, protesters swarmed Facebook’s headquarters in New York City – all naked and holding up pictures of enlarged nipples. 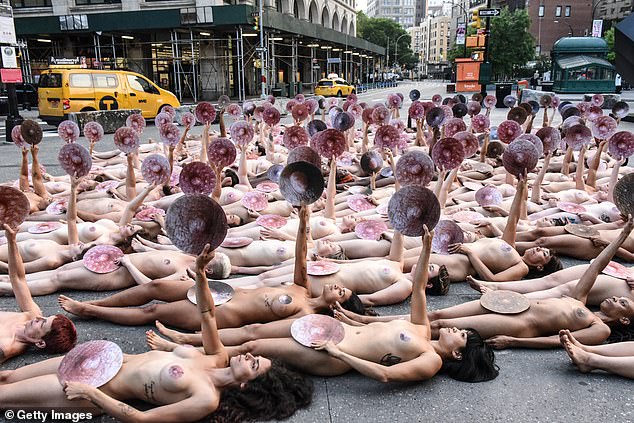 In 2020, protesters swarmed Facebook’s headquarters in New York City – all naked and holding up pictures of enlarged nipples

The movement included the National Coalition Against Censorship for their #WeTheNipple campaign and the women’s rights group Grab Them By The Ballot.

At this time, Facebook only allowed nudity in depictions of paintings and sculptures.

To get around such a barrier during the 2020 demonstration, Tunick, who is known for staging similar en masse nude art installations in iconic locations around the world, had his nude female models cover their nipples with images of men’s nipples, which were ‘donated’ for that specific purpose.

Those same images of men’s nipples were also blown up and used to cover both male and female genitalia during the demonstration outside the Astor Place Cube, known as the Alamo.