Meta is set to be planning to finally lift the lid on its new ‘mixed reality’ headset next month.

Mark Zuckerberg’s firm has announced that the company’s annual ‘Meta Connect’ conference will be livestreamed on October 11.

Zuckerberg has also posted a photo of himself wearing a headset to his Facebook page with the caption: ‘See you at Meta Connect on Oct 11’ – a strong indicator that the device will finally be revealed at the event.

However, the mixed reality headset, which goes under the code name Project Cambria, is well concealed in the photo to keep fans guessing.

Meta CEO Mark Zuckerberg posted a photo of him wearing a headset to his Facebook page with the caption: ‘See you at Meta Connect on Oct 11’. The new headset will likely be revealed at the ‘Meta Connect’ conference, which is taking place virtually on October 11 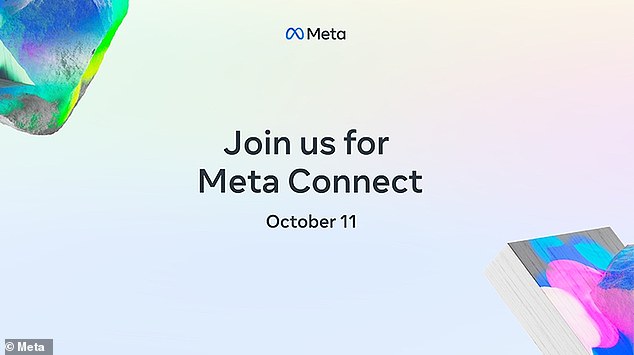 The Meta Connect conference is taking place virtually on October 11. It’s suspected the company will reveal its new ‘mixed reality’ headset at the event

WHAT IS MIXED REALITY?

Mixed reality describes experiences that combine elements of both a physical and virtual environment, allowing real and digital elements to coexist and interact.

Augmented reality (AR) and mixed reality (MR) are both immersive technologies but they aren’t the same.

Mixed reality is an extension of augmented reality that allows real and virtual elements to interact in an environment.

Mixed reality maintains a connection to the real world, so it is not considered a fully immersive experience like virtual reality (VR) is.

Meta said in a blog post that next month’s conference will provide ‘a look at what’s to come in the near and far future’ and ‘and the next era of social computing’.

Also at the Meta Connect, the company will be ‘exploring what it will take to bring the metaverse to life’.

Zuckerberg has already said that the upcoming ‘high-end’ headset is launching later this year.

Back in May, Zuckerberg posted a teaser video of himself testing out the headset, although the device itself had been pixelated.

The video shows Zuckerberg petting a cute virtual creature, picking up and throwing a virtual ball, and viewing a web browser that appears to be floating right in front of his face.

The CEO already spoke about a few Project Cambria features at Meta Connect 2021, including sensors that enable a user’s avatar to make natural eye contact and facial expressions in real time while in the metaverse.

Meanwhile, cameras will pass high-resolution full-colour video to the headset’s screens, he said.

Zuckerberg has also already said that Project Cambria will cost more than the current headsets, although it’s not known how much exactly.

Project Cambria is expected to cost around £799, two people familiar with the matter previously told The Information.

Last year, Zuckerberg said Project Cambria is ‘not the next Quest’, and although it will be compatible with the latest Quest device it will be its own product.

After Project Cambria is released, Meta reportedly wants to release three more headsets – Stinson (to be released in 2023), Funston (2024), and Cardiff (2024), according to an internal road map seen by The Information. 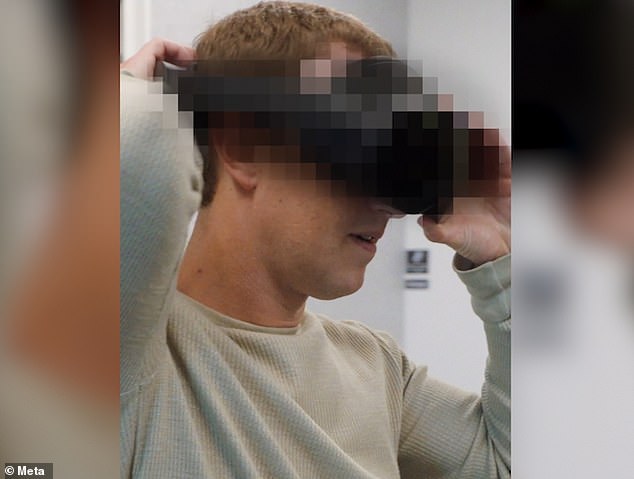 Back in May, Zuckerberg posted a teaser video of him testing out the headset, although the device itself had been pixelated

Zuckerberg said Project Cambria is ‘the future of hardware to help bring the metaverse to life’.

The term ‘metaverse’, coined in the 1992 dystopian novel ‘Snow Crash’, is used to describe immersive, shared spaces accessed across different platforms where the physical and digital converge.

Zuckerberg, who co-founded Facebook in his dormitory room at Harvard University in 2004, has described the metaverse as an ’embodied internet’.

Within years, Facebook users will be able to use the platform not on their phone or computer, but by donning a headset.

Rather than swiping the screen of a device, they could potentially meet up with a Facebook friend in a virtual shared space – like an ultra-realistic simulation of another planet or an idyllic garden – and vocally chat to each other’s avatars.

‘It’ll be characterised by social presence, the feeling that you’re right there with another person, no matter where in the world you happen to be,’ Meta says.

‘The metaverse is still a ways off, but parts of it are already here and even more are on the horizon.’

Zuckerberg’s company announced at last year’s Connect conference in October 2021 that it was renaming itself, as part of its long-term project to turn its social media platform into a metaverse.

So the word ‘Facebook’ now refers to the social media platform and not the company that owns it.

THE FACEBOOK ‘METAVERSE’: A VIRTUAL WORLD WITHIN A WORLD

In a recent interview, Mark Zuckerberg said that over the next five years, he wants people to think of Facebook not as a social media company, but a ‘metaverse’ company.

That is one that is akin to a virtual environment where people can work and play for most of their 24 hours without leaving their home.

‘And my hope, if we do this well, I think over the next five years or so, in this next chapter of our company, I think we will effectively transition from people seeing us as primarily being a social media company to being a metaverse company,’ Zuckerberg said in the interview with The Verge.

‘And obviously, all of the work that we’re doing across the apps that people use today contribute directly to this vision in terms of building community and creators.

‘But this is something that I’m spending a lot of time on, thinking a lot about, we’re working on a ton. And I think it’s just a big part of the next chapter for the work that we’re going to do in the whole industry.’

So what exactly is the metaverse?

As Zuckerberg describes it, it’s a ‘vision’ that spans the entire tech industry, calling it the successor to the mobile internet.

‘But you can think about the metaverse as an embodied internet, where instead of just viewing content — you are in it,’ he continued.

‘And you feel present with other people as if you were in other places, having different experiences that you couldn’t necessarily do on a 2D app or webpage, like dancing, for example, or different types of fitness.’

The Facebook CEO says his vision – which he has been working on for several months – would not only reach into virtual reality, but augmented reality, computers, mobile devices and game consoles as well.