From the Apple Watch to Google’s Pixel Watch, many of the world’s biggest tech firms now have their own smartwatches on sale.

Facebook’s parent company, Meta, was rumoured to be the next tech giant to be developing a smartwatch with two cameras, under the project name ‘Milan’.

But a new report claims that Meta has halted development on the smartwatch and is instead working on ‘other devices for the wrist.’

EXCLUSIVE: Meta has halted the development of a smartwatch with dual cameras and is instead working on other devices for the wrist, a source says https://t.co/wWjbWsLSCJ

Facebook’s parent company, Meta, was rumoured to be the next tech giant to be developing a smartwatch with two cameras

– Removable gold watch face with two buttons on the side

The report by Bloomberg cites ‘a person with knowledge of the matter,’ and claims that Meta had been developing the smartwatch for at least two years.

‘The device … was designed to include several features common in other smartwatches, including activity tracking, music playback and messaging,’ Bloomberg wrote.

‘A prototype of the now halted device includes dual-cameras, a key differentiator from market leaders like the Apple Watch.’

A 5MP camera was located below the main display, while at 12MP camera was on the backside and sat against the wearer’s wrist, according to images seen by Bloomberg.

While this might seem like a strange location for a camera, the report claims it would have allowed users to remove the watch face from its strap to quickly take photos.

However, the location also caused issues incorporating electromyography within the smartwatch – a feature for translating nerve signals from the wrist into digital commands.

In a blog post earlier this year, Meta explained how it plans to use electromyography to transform people’s hands into ‘controllers’ for other devices. 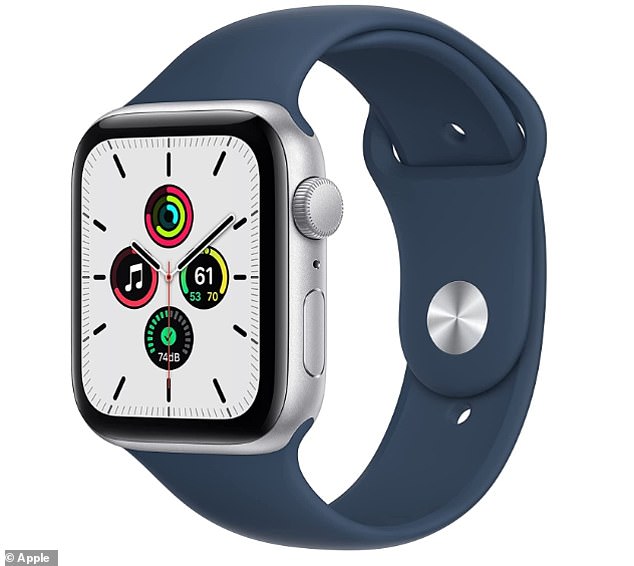 The removable watch face had a gold casing, with two buttons on the side – much like the Apple Watch (pictured)

‘This is about decoding those signals at the wrist — the actions you’ve already decided to perform — and translating them into digital commands for your device,’ it explained.

The removable watch face had a gold casing, with two buttons on the side – much like the Apple Watch. 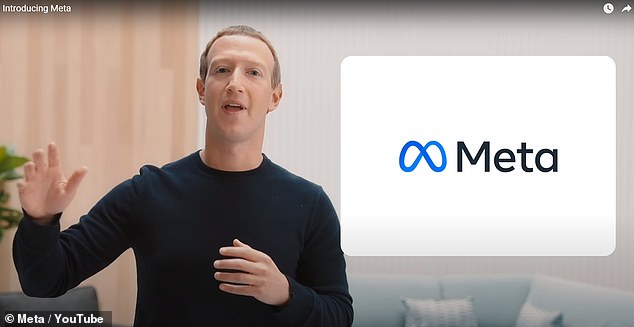 Earlier this year, Meta explained how it plans to use electromyography to transform people’s hands into ‘controllers’ for other devices

The smartwatch was set to be priced at $349, and to be released in spring 2023, according to Bloomberg.

While the Apple Watch rival has been halted, Bloomberg claims that Meta is still working on several other devices for the wrist.

In a new video, Zuckerberg can be seen testing a demo called ‘the World Beyond’ on the ‘high-end’ headset, which will come out later this year.

It shows Zuckerberg petting a cute virtual creature, picking up and throwing a virtual ball, and viewing a web browser that appears to be floating right in front of his face.

Mixed reality describes experiences that combine elements of both a physical and virtual environment, allowing real and digital elements to coexist and interact.

THE FACEBOOK ‘METAVERSE’: A VIRTUAL WORLD WITHIN A WORLD

In a recent interview, Mark Zuckerberg said that over the next five years, he wants people to think of Facebook not as a social media company, but a ‘metaverse’ company.

That is one that is akin to a virtual environment where people can work and play for most of their 24 hours without leaving their home.

‘And my hope, if we do this well, I think over the next five years or so, in this next chapter of our company, I think we will effectively transition from people seeing us as primarily being a social media company to being a metaverse company,’ Zuckerberg said in the interview with The Verge.

‘And obviously, all of the work that we’re doing across the apps that people use today contribute directly to this vision in terms of building community and creators.

‘But this is something that I’m spending a lot of time on, thinking a lot about, we’re working on a ton. And I think it’s just a big part of the next chapter for the work that we’re going to do in the whole industry.’

So what exactly is the metaverse?

As Zuckerberg describes it, it’s a ‘vision’ that spans the entire tech industry, calling it the successor to the mobile internet.

‘But you can think about the metaverse as an embodied internet, where instead of just viewing content — you are in it,’ he continued.

‘And you feel present with other people as if you were in other places, having different experiences that you couldn’t necessarily do on a 2D app or webpage, like dancing, for example, or different types of fitness.’

The Facebook CEO says his vision – which he has been working on for several months – would not only reach into virtual reality, but augmented reality, computers, mobile devices and game consoles as well.