The Met Gala made its return to New York on Monday night after more than two years – and with it came a host of very bizarre red carpet fashions that were so wildly over-the-top, they would have looked more at home at a costume party on Halloween rather than the Costume Institute.

This year’s star-studded event features a pared-down guestlist of just 400 people, as well as a long list of new health and safety restrictions in light of the ongoing COVID pandemic – which forced host Anna Wintour to cancel last year’s event and then postpone this year’s Met Gala from its traditional first Monday in May date.

But while the 2021 Met Gala is certainly very different to those that have gone before it, something that certainly has not changed fro previous years is the huge number of A-list guests missing the sartorial mark.

Tennis pro Naomi Osaka, 23, who has faced struggles both on and off the court in recent months, facing shock early defeats at the Olympics and the US Open, after dropping out of the French Open and Wimbledon to deal with mental health struggles, attended her first-ever Met Gala as one of its co-chairs this year. 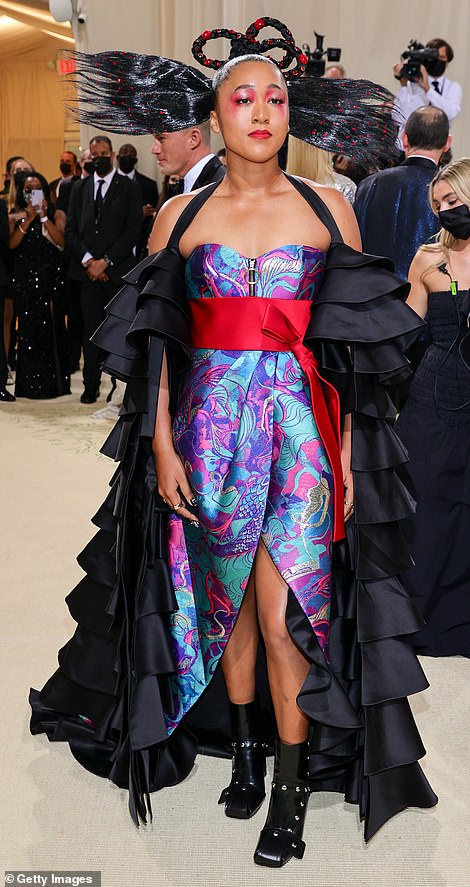 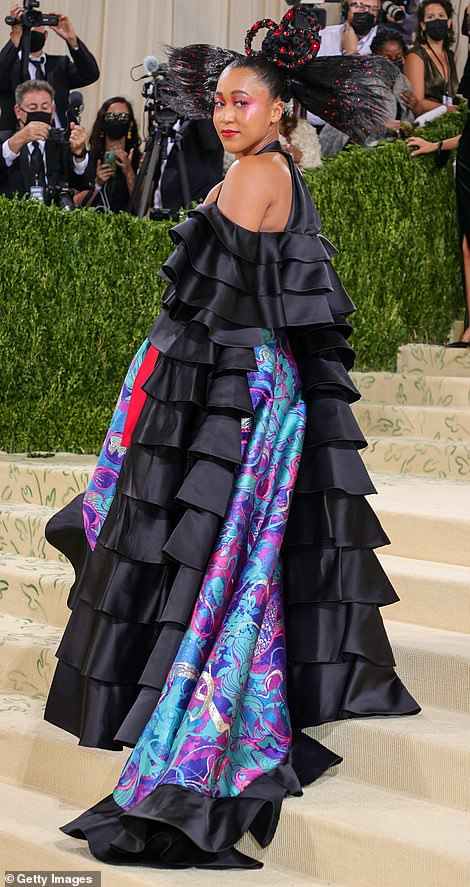 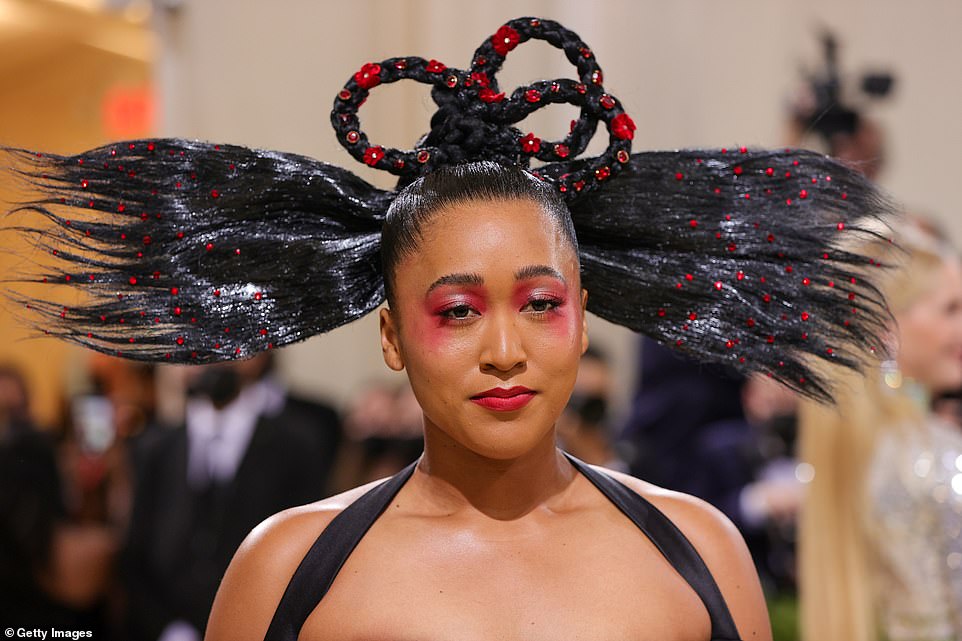 Osaka’s hair was coiffed into a bizarre pretzel-shaped updo with huge fan-shaped pieces jutting out from either side of her head, which left her looking more like the guest at a Halloween party than a glittering celebrity gala 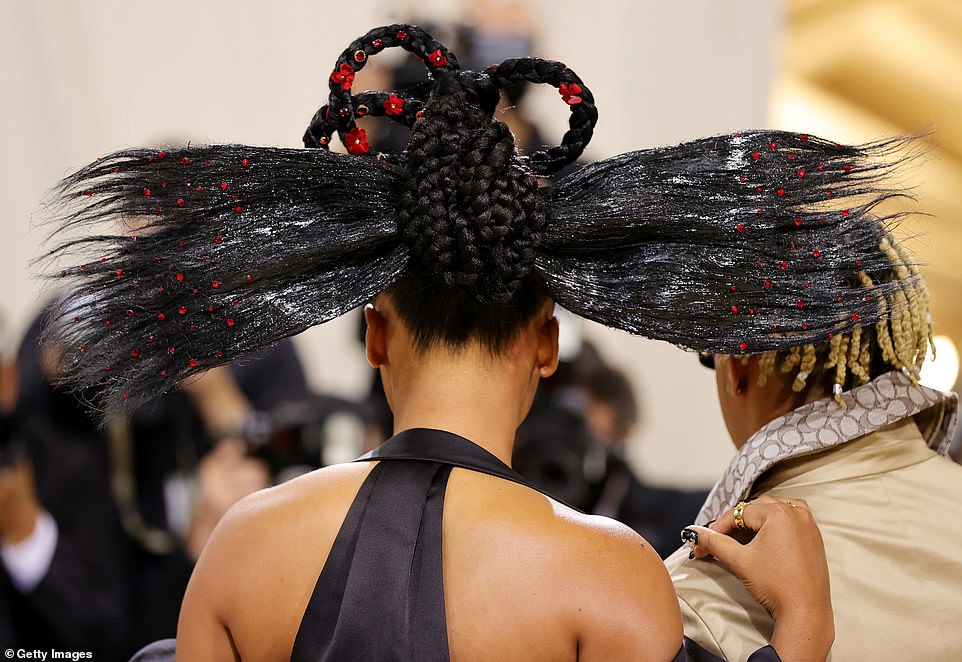 The baffling updo was all the more intricate from behind, featuring several tightly-woven braids that were not doubt used to anchor the rest of the enormous style 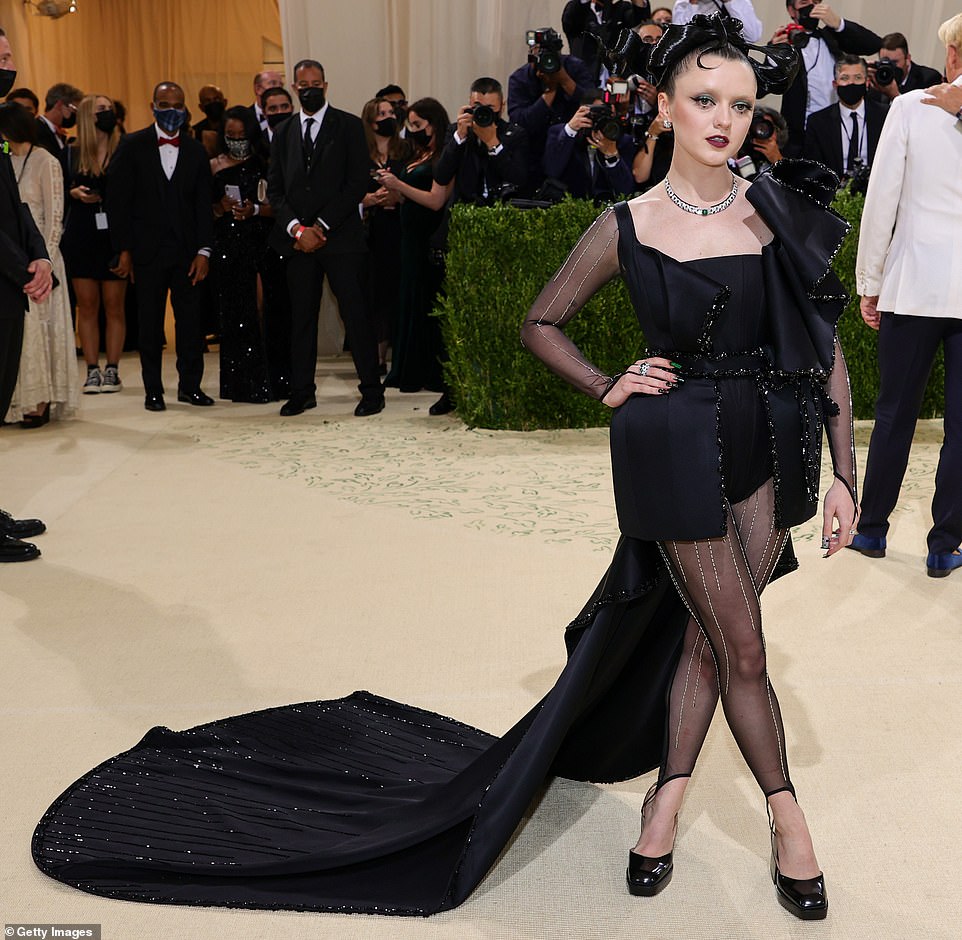 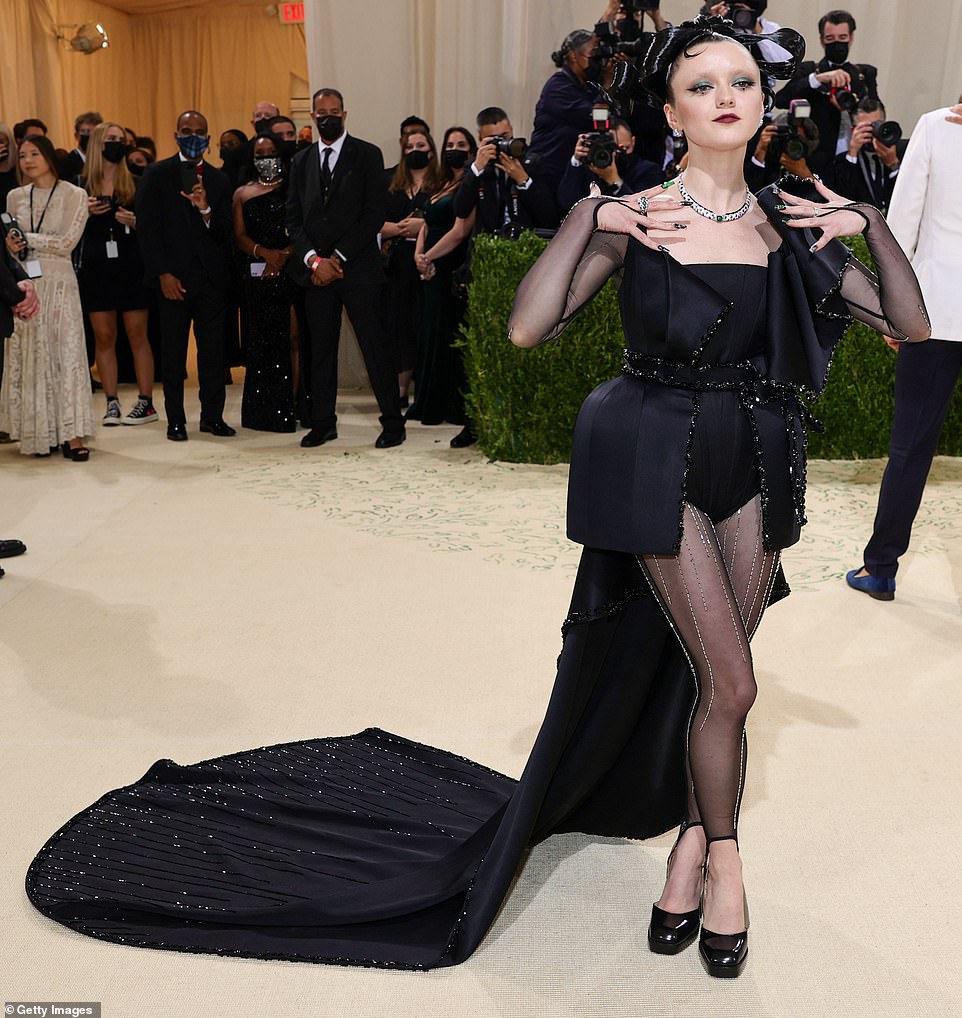 She paired a black bodysuit with sheer bedazzled tights and boxy heels, but it was her beauty look that really caused a stir 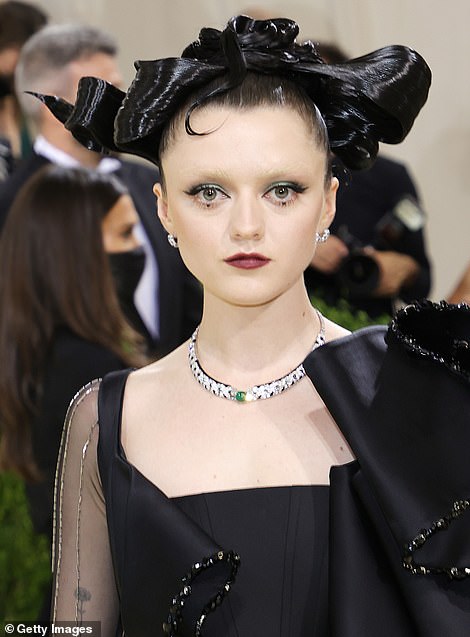 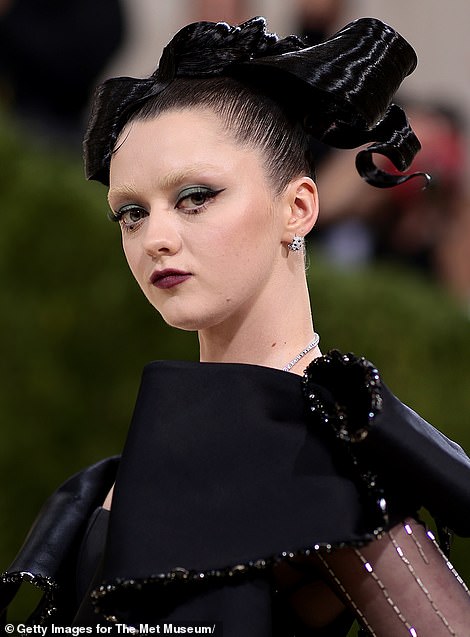 Hair today… The 24-year-old actress bleached her dark brows for the event, and she wore some over-the-top green eye makeup to draw even more attention to her eyes

But while her role as a co-chair earned her a spot as one of he event’s leading faces, when it came to her red carpet look, Osaka faced yet another defeat.

The Japanese-American sporting star paid tribute to her heritage with a kimono-inspired dress, which featured a red silk sash at the waist.

However the cultural detail was very easily missed next to the gown’s voluminous ruffled sleeves, which dwarfed Osaka – as did the bizarre sculptural hairstyle that she modeled.

Her brunette locks were coiffed into a Star Wars-esque up-do, featuring a pretzel-shaped braid that sat atop her head, with two fan-style sections jutting out from either side of her head – looking ever so slightly like the fins of a fish.

Making the ‘do all the more outlandish were the large red gems that were scattered throughout it, and which matched the vibrant red eye shadow that was the focus of her makeup look. 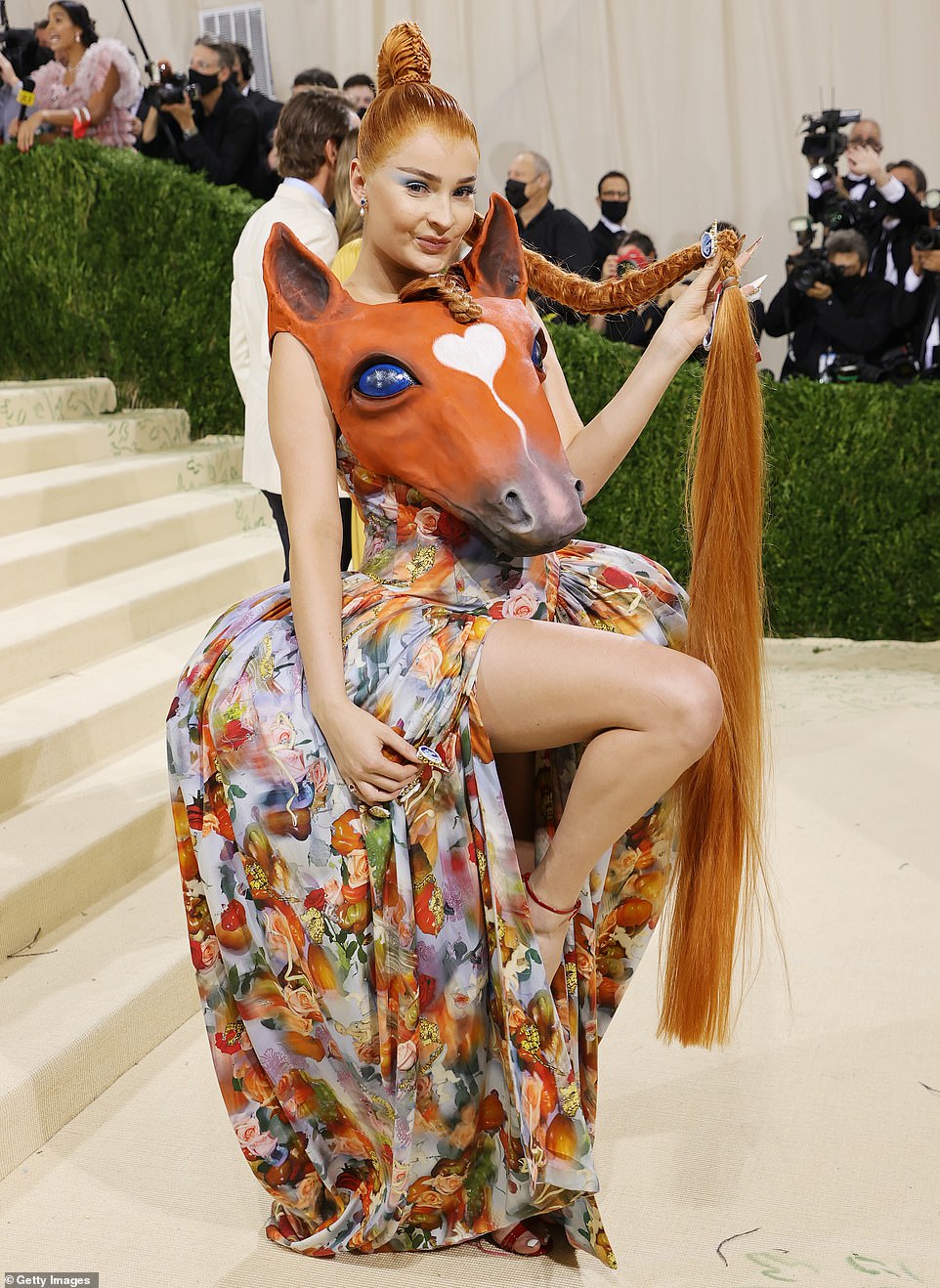 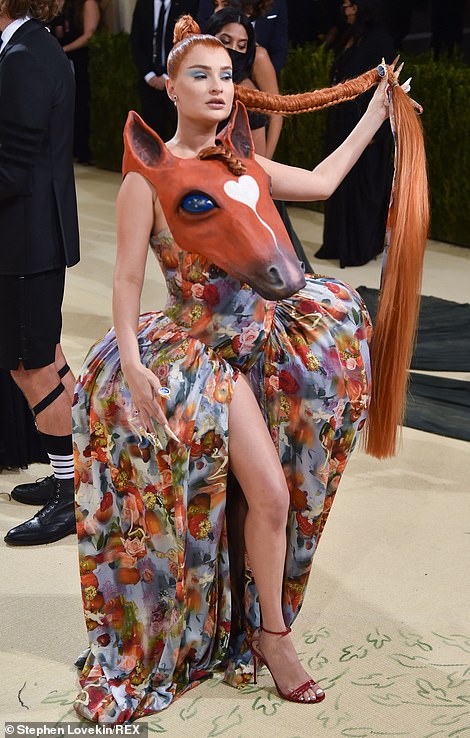 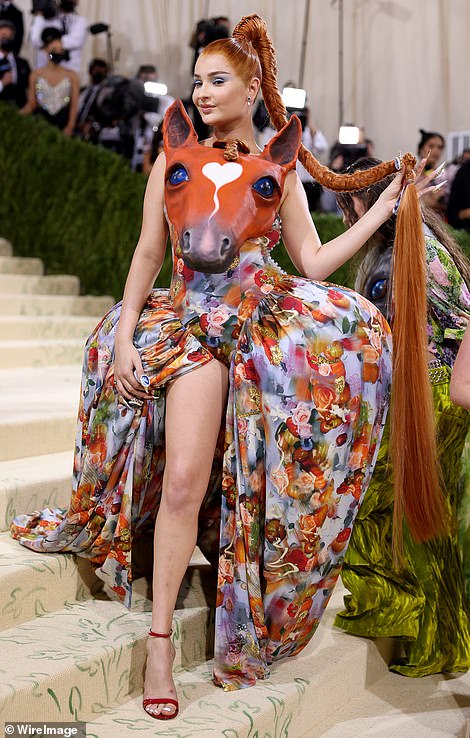 The 29-year-old’s horse head even had a matching hairstyle, modeling the same orange braid as the singer 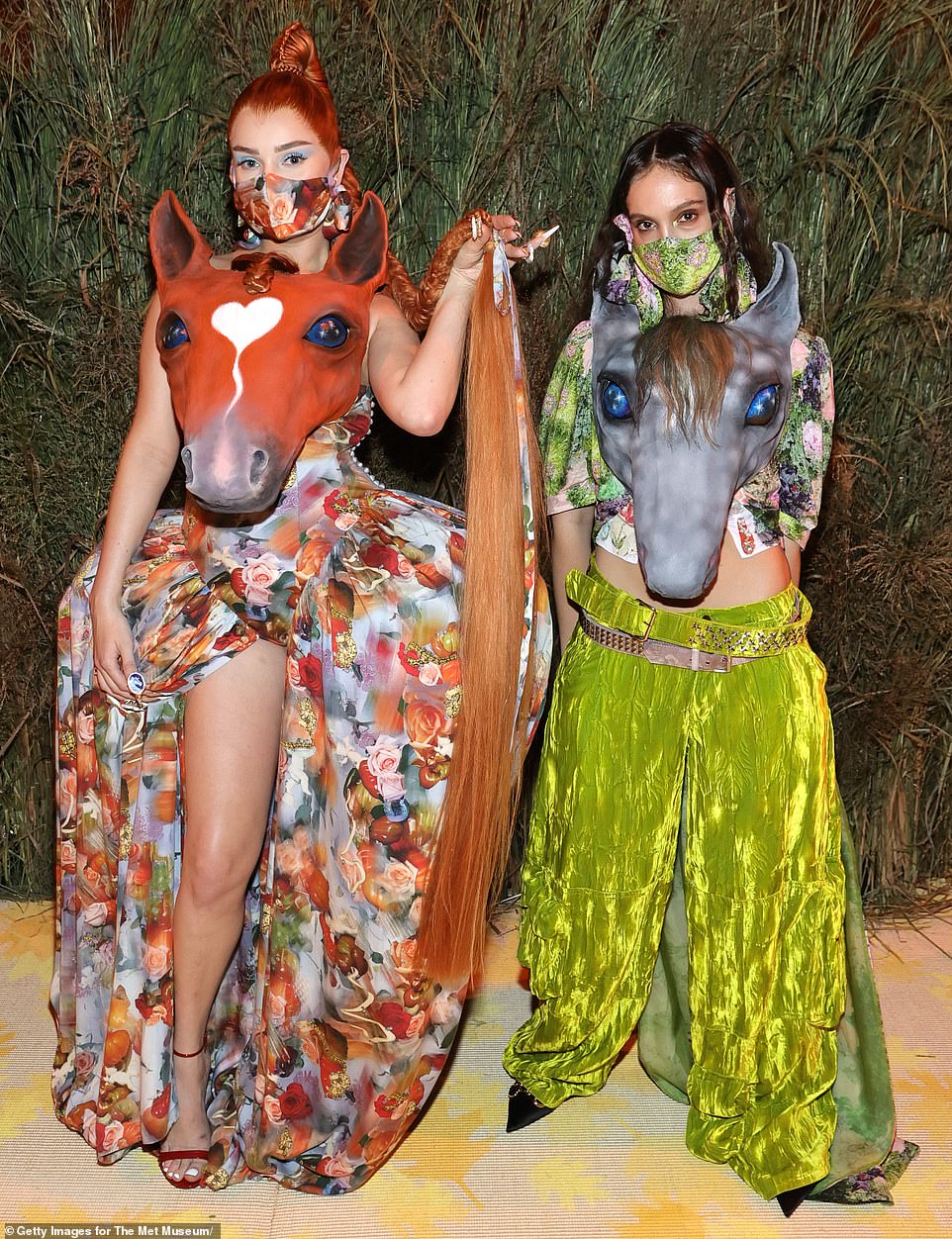 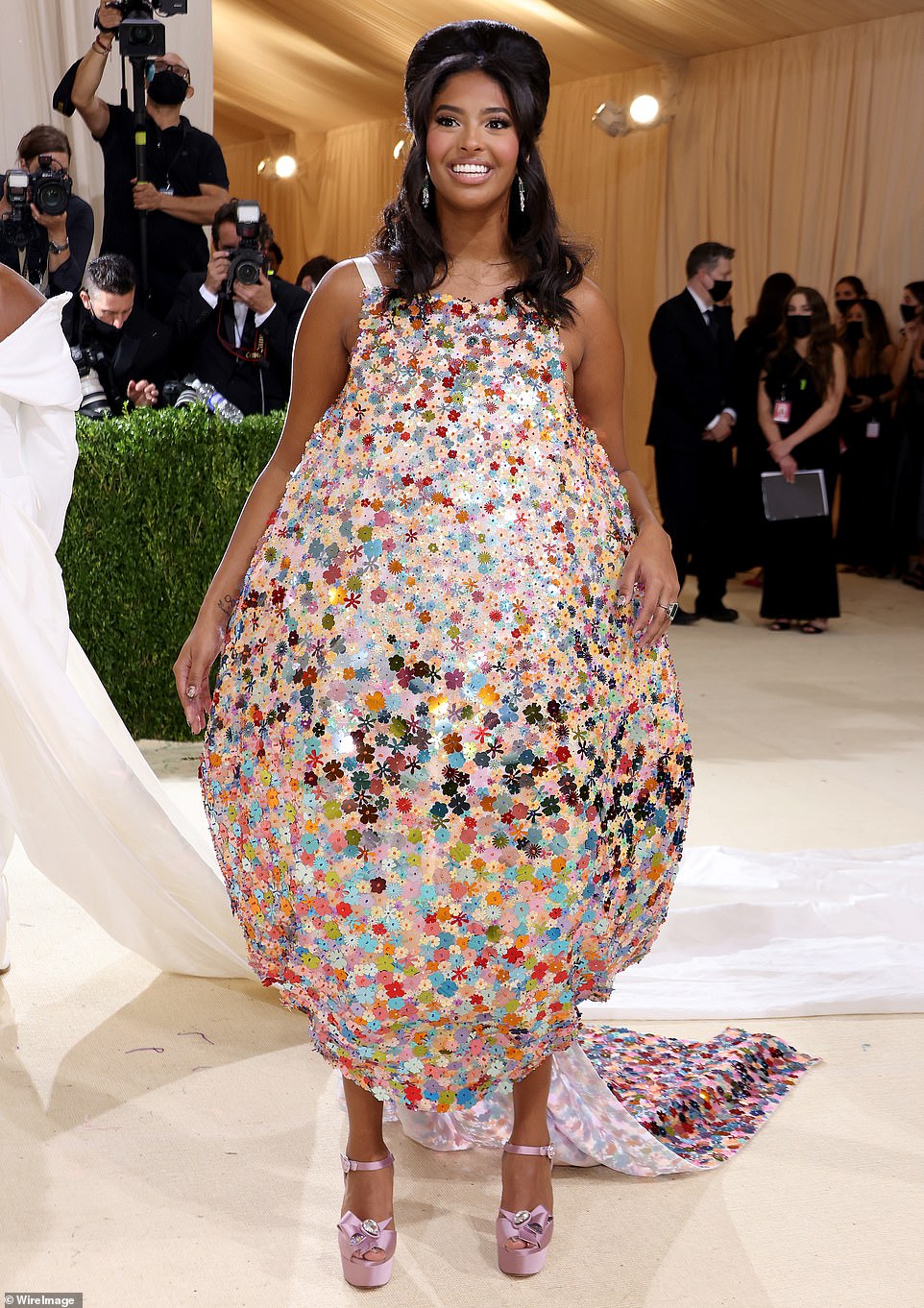 The 18-year-old model’s glittering gown inexplicably puffed out in a circular shape, completely swamping her slim figure – leaving her looking as though she had put a balloon in her skirt 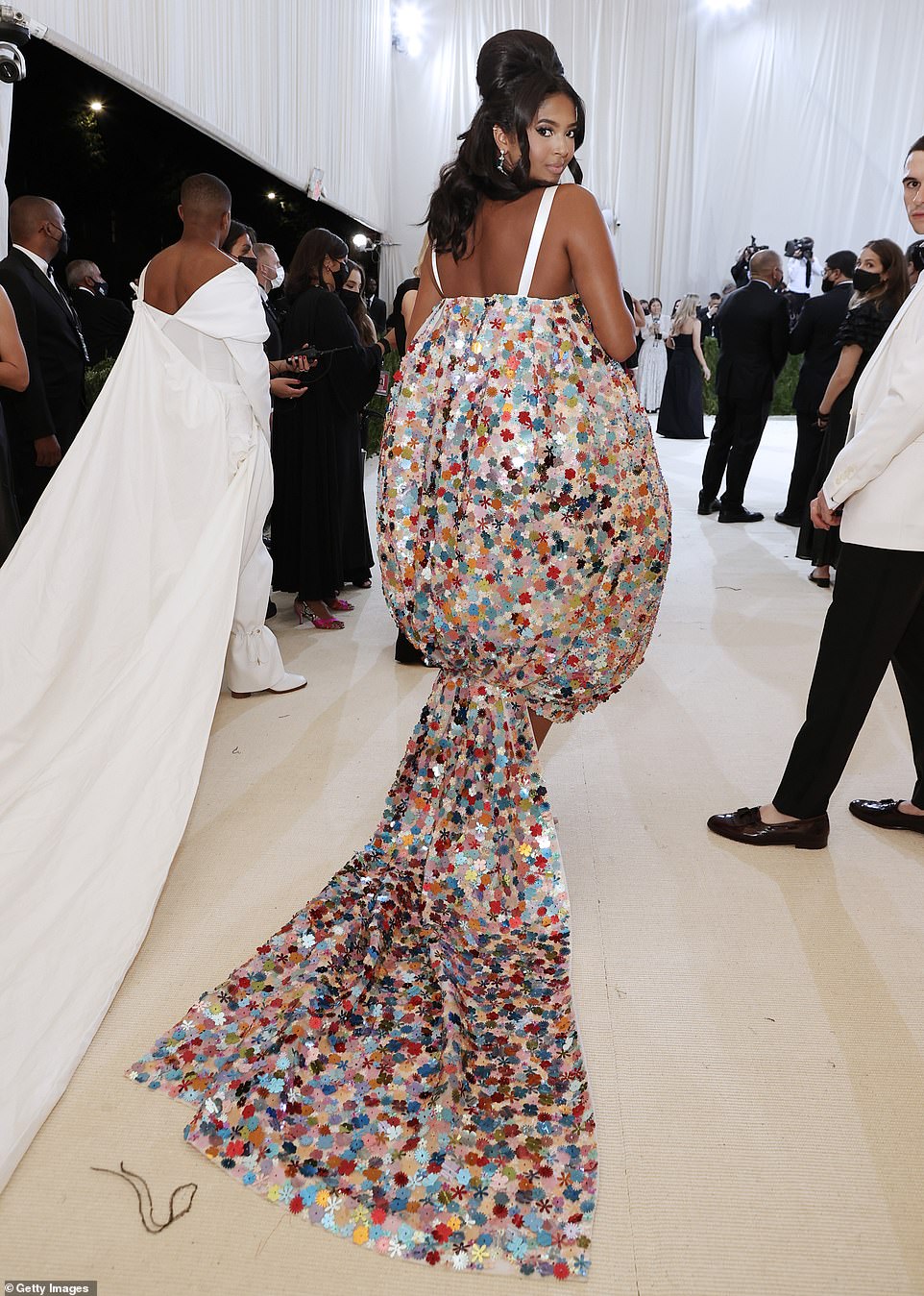 Natalia’s dress also looked very bizarre from the back, where it was finished off with a lengthy train 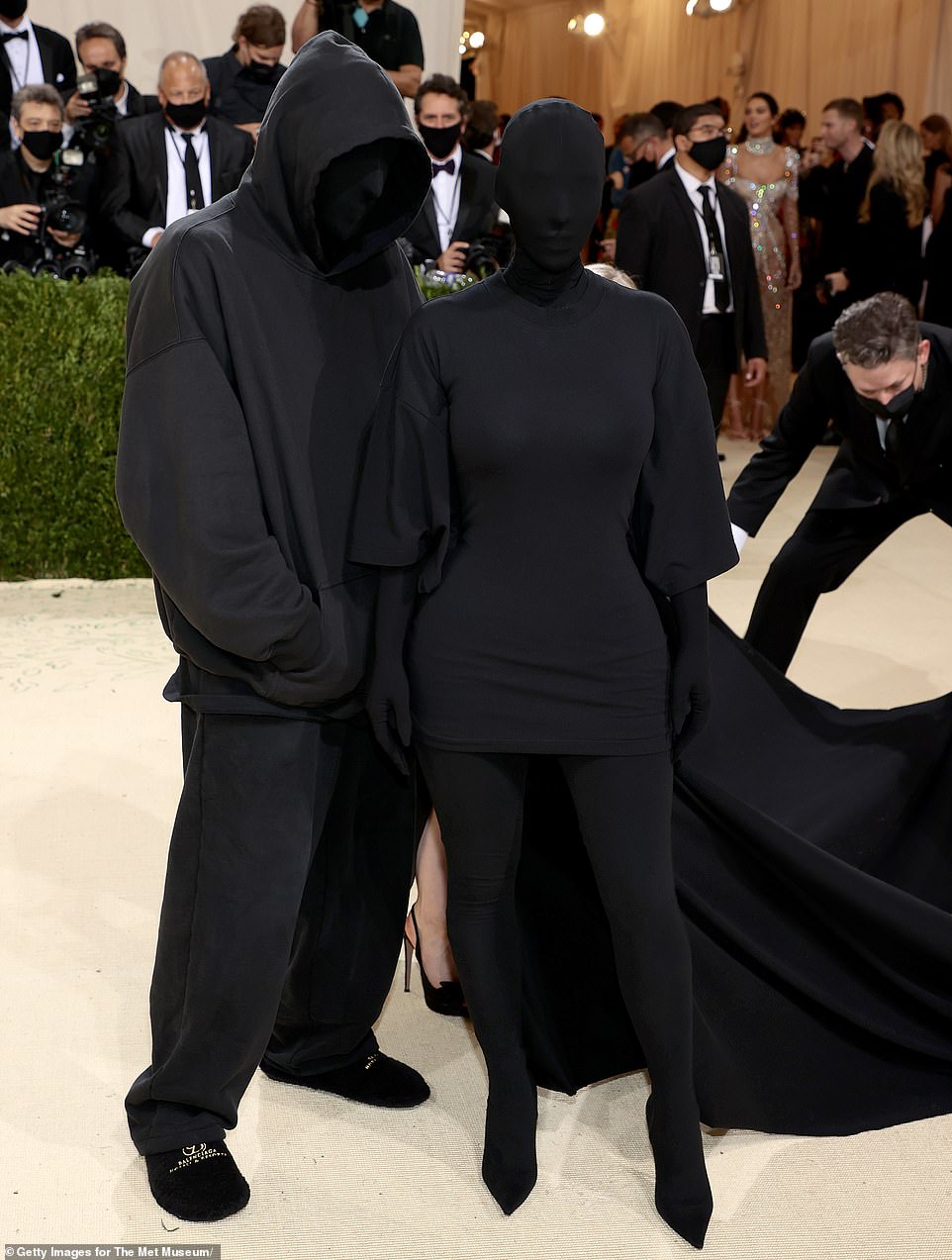 The 40-year-old concealed her face in her all-black look, which made her look like something out of a horror movie

Also opting for a wacky, over-the-top ‘do was Game of Thrones star Maisie Williams, 24, whose dark hair was styled in a similarly funky style – with much of it piled on top of her head in a twisted wave, complete with a quirky flick that could be seen coming out of the back of her head.

Her gothic ensemble was made all the more eerie by her lack of eyebrows, which she bleached for the event.

Meanwhile, singer Kim Petras seemed to want to make a mockery of the Met Gala red carpet in her baffling outfit, which featured a giant fake horse head as a shirt.

The 29-year-old wore the brown horse over a colorful patterned gown, and even gave the equestrian accessory the same ginger braid that she herself modeled.

Kobe Bryant’s model daughter Natalia made her Met Gala debut on Monday night, when she certainly stood out from the crowd – but unfortunately not for the reasons she might have hoped.

The 18-year-old wore an incredibly bizarre bedazzled dress that looked as though it had a giant balloon inside it – leaving her looking like a human disco ball, a far cry from the chic fashion choices she usually makes. 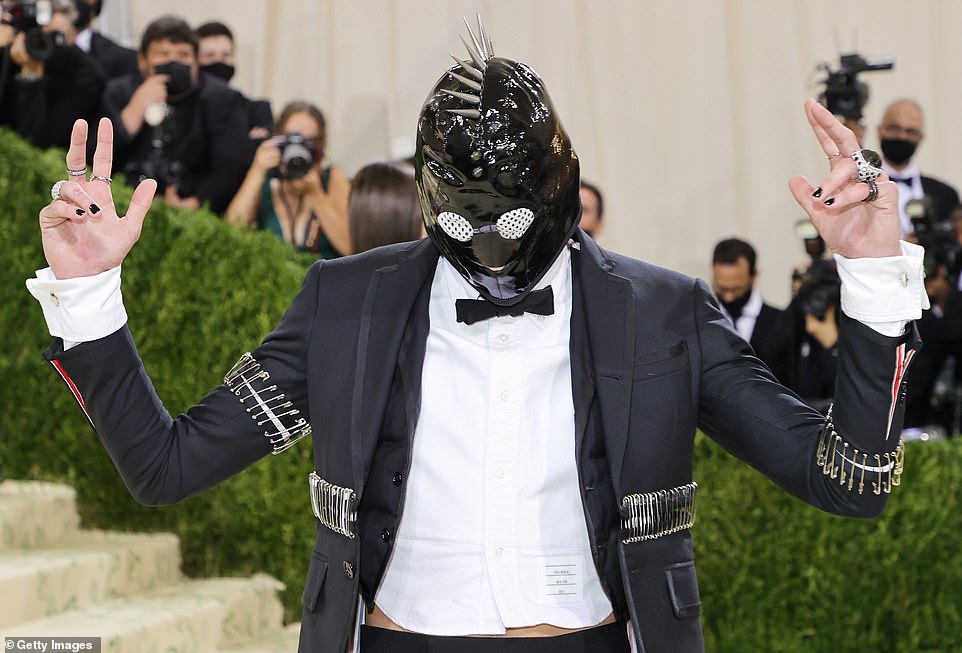 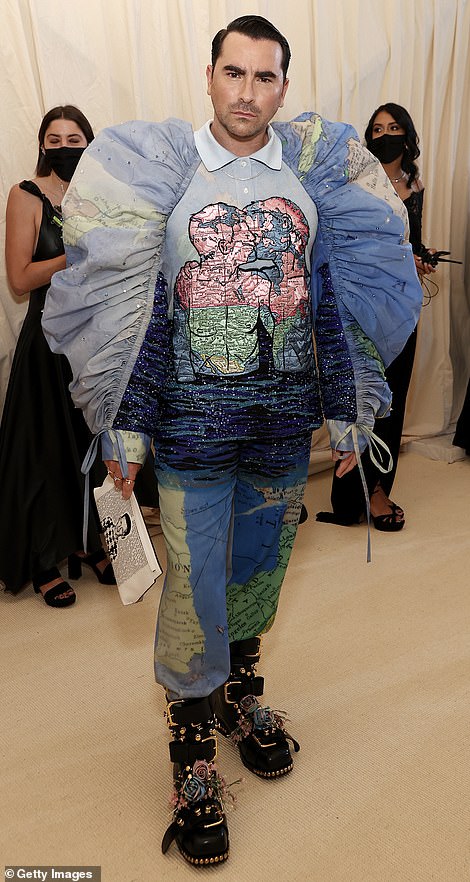 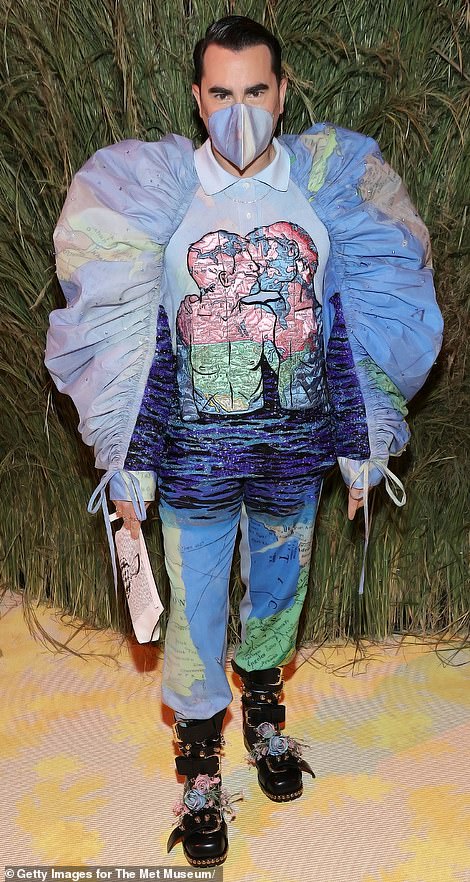 Oh dear: Schitt’s Creek actor and creator Dan Levy, son of comedian Eugene, looked like a cartoon character in his wacky outfit, which had enormous sleeves and a garish bedazzled design 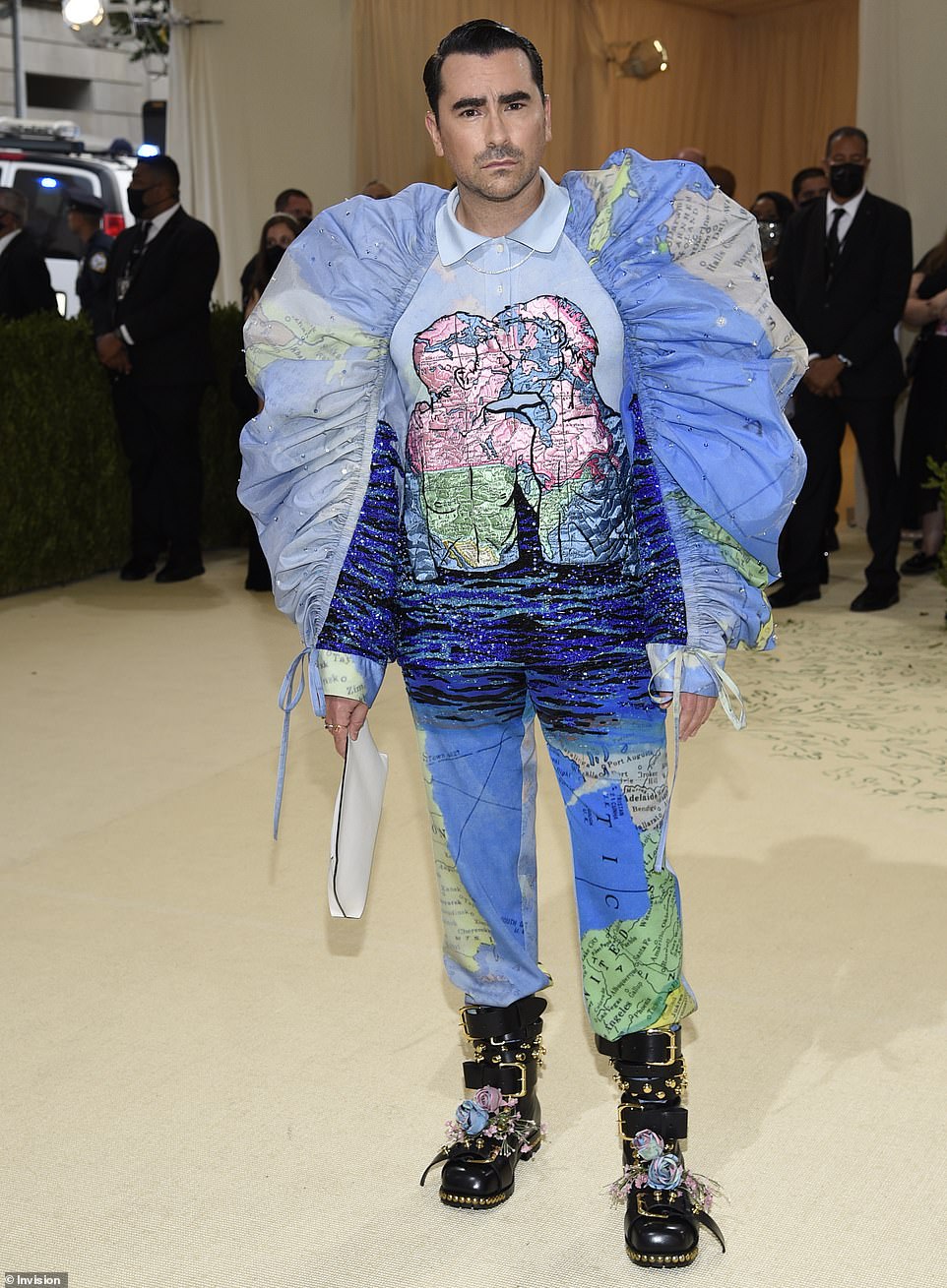 He paired his look with some over-the-top black boots, which were covered in flowers and only served to add to the comical overall appearance 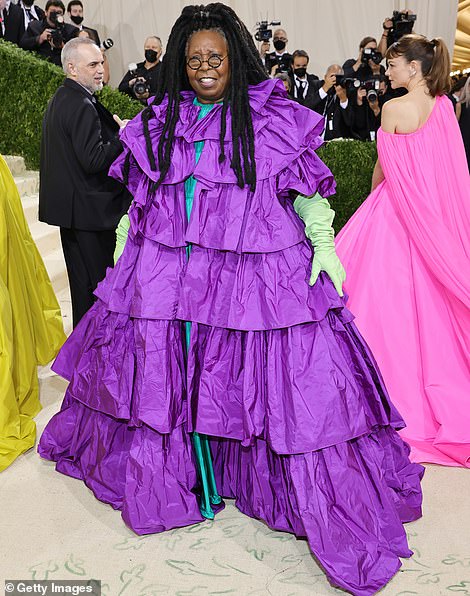 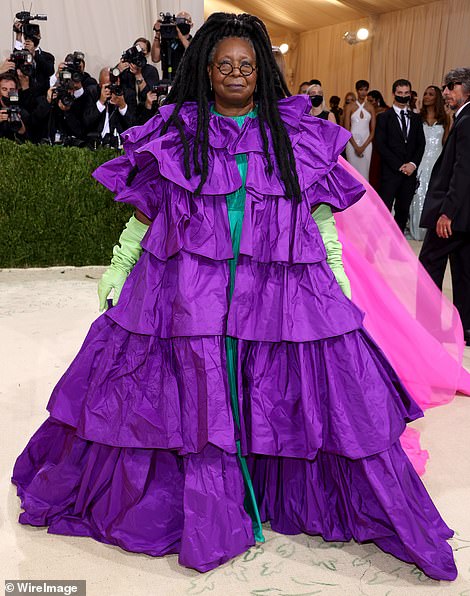 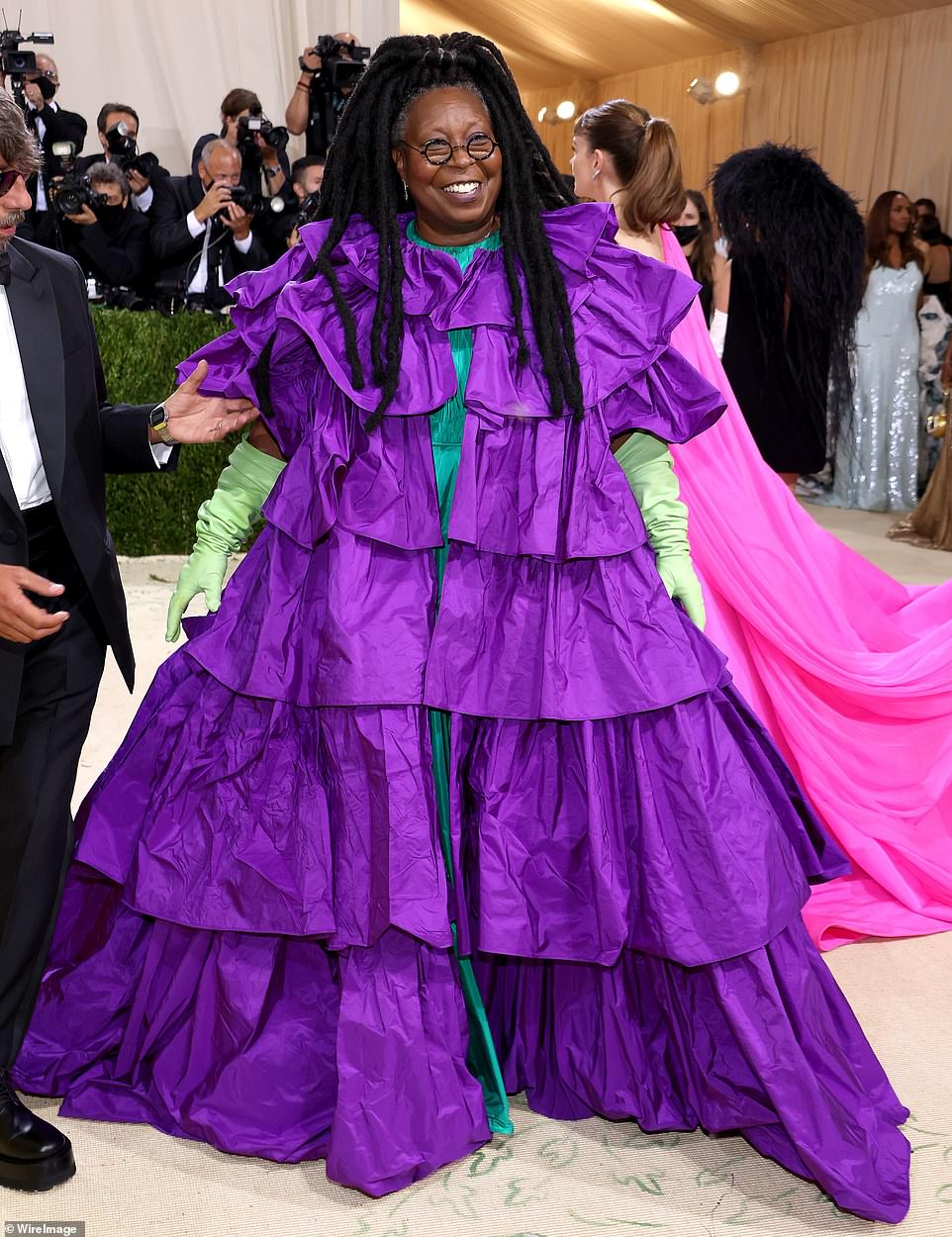 Her enormous dress featured large colorful sequins all over it, which also covered a length train that trailed behind her as she walked up the steps into the event.

She paired the look with a pair of pink satin heels – and managed to redeem her overall look with her makeup, which was the perfect level of glam and matched her 60s style beehive hairstyle.

While Natalia might be forgiven for making such a sartorial mistake at her first-ever Met Gala, there were also several regular guests who totally missed the mark on the evening, including long-time event attendee Kim Kardashian.

The 40-year-old hinted at her ensemble on Sunday, when she was pictured in New York City wearing a bizarre Balenciaga number that zipped up over her face – and she opted for a very similar look when it came to Monday night’s soiree.

Eschewing the floor length gowns that many of her fellow guests modeled, Kim instead wore an all-black look that consisted of a baggy T-shirt, leggings, pointed-toe boosts – and, of course, the stretchy face covering, which left her looking much like a character out of a horror movie.

Funky face coverings were clearly something of a theme for the evening – with Erykah Badu also choosing to conceal her face behind a rather bizarre accessory. 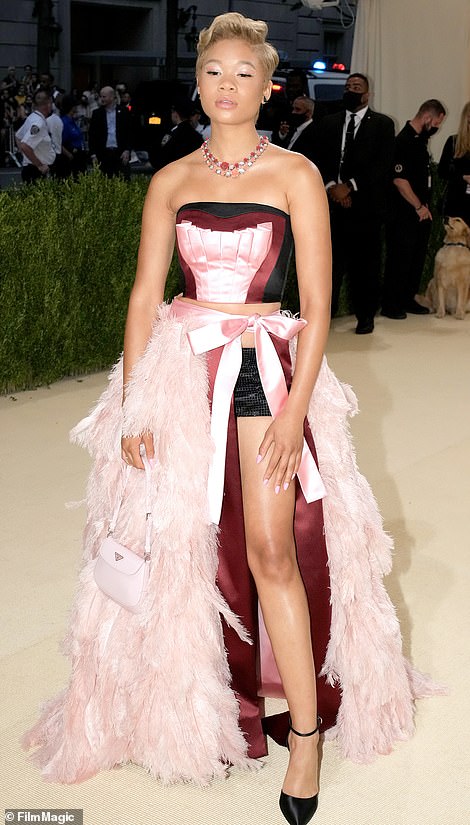 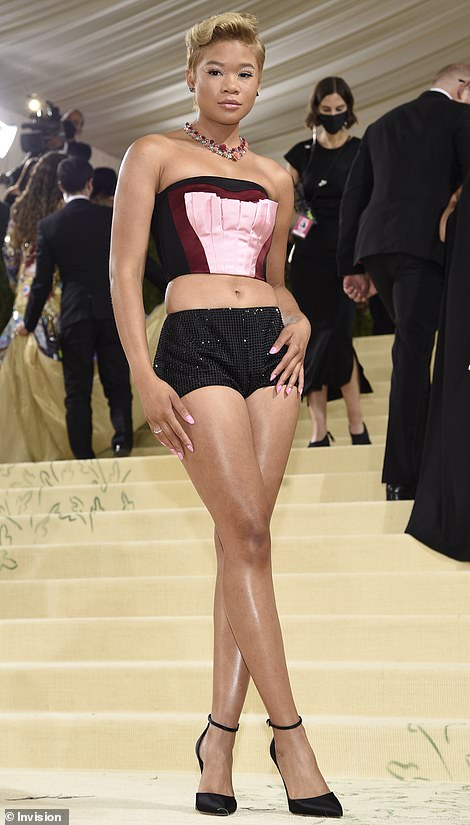 Woah: Actress Storm Reid arrived at the event in what appeared to be a pretty pink gown, however she soon whipped off her skirt to reveal a skimpy bustier and tiny pair of bedazzled shorts that looked a bit risque for such a glamorous gala 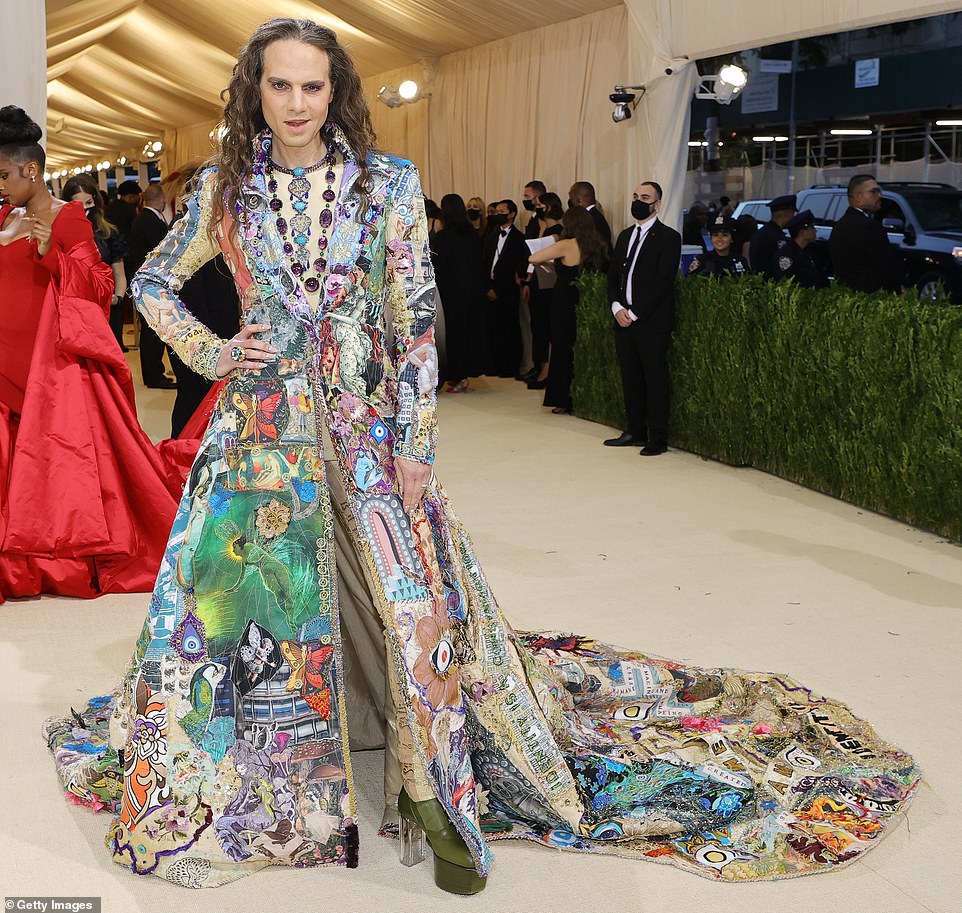 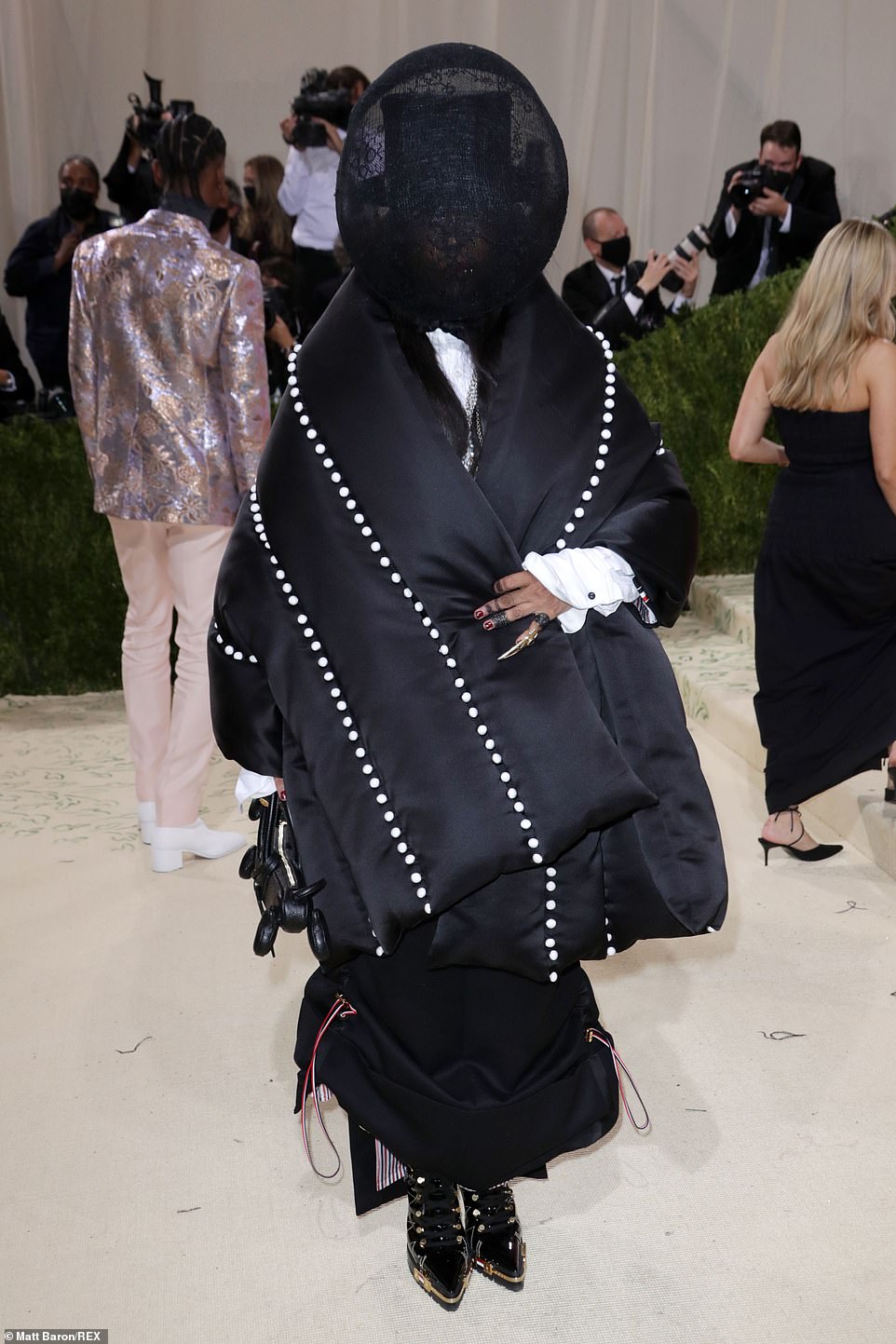 Funky facial coverings seemed to be quite the trend on the red carpet at this year’s Met Gala, with Erykah Badu also opting to shield her face with a bizarre egg-shaped accessory 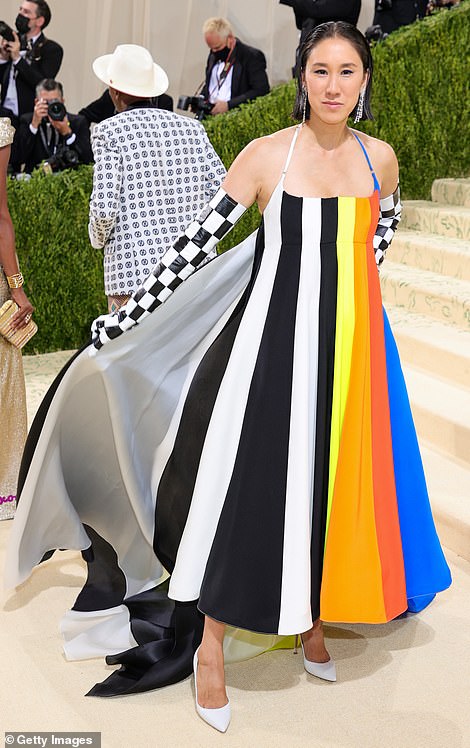 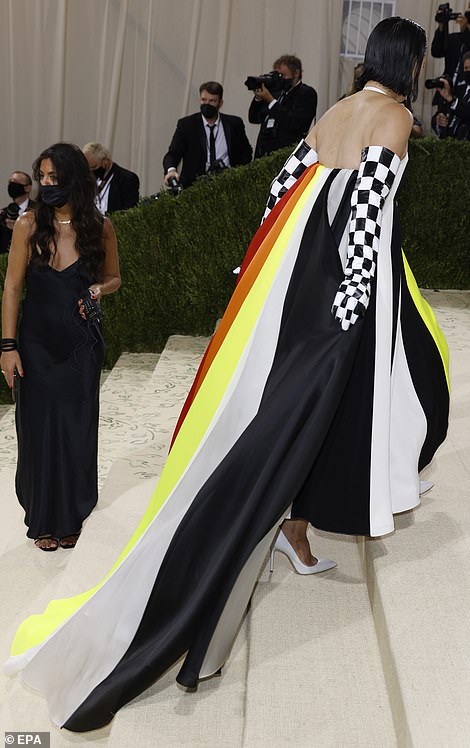 Eva Chen, director of fashion partnerships at Instagram, also looked as though she had ordered her racing car-inspired outfit from a costume website

The 50-year-old singer wore what looked like a large black fencing mask when she first arrived on the carpet, before replacing it with a large black top hat as she posed for the cameras. Adding to the quirkiness of her look was an enormous puffy black coat, which looked much like a comforter, and a leather black handbag in the shape of a sausage dog.

But while Erykah missed the mark with an all-black ensemble, there were several stars who missed out on style success because of the garish amount of color that they chose for the evening.

Whoopi Goldberg was one such celebrity.

The actress-turned-TV host looked as though she had taken inspiration from Barney the Dinosaur in choosing her vibrant purple-and-green ensemble, which was so voluminous that she was quite literally impossible to miss as she made her way into the glittering event.

Whoopi, 65, added to the uncomfortably bold ensemble with a pair of bright green gloves which clashed painfully with the rest of the look.