Phoebe Dynevor, Lily James and Daisy Edgar-Jones looked incredible as they led the stars at the Met Gala at New York City ‘s Metropolitan Museum of Art on Monday

Actress Phoebe, 27, flashed her bra beneath a sheer black minidress from Louis Vuitton’s  SS22 ready-to-wear featuring a mesh train which exhibited her legs.

Meanwhile, Daisy put on a leggy display in a shimmering silver minidress featuring matching tassels and Lily left little to the imagination in a semi-transparent thigh-split gown with blue segments and pearls.

Lucy Boynton was a vision in a sheer white gown featuring short sleeves, while toting her essentials around in a sliver clutch while Sophie Turner displayed full maternity glow alongside her husband Joe Jonas.

Gemma Chan put her toned pins on display in a glittery charcoal midi dress resembling a chandelier, which she wore with a leather jacket.

The 26-year-old Game Of Thrones actress, who is expecting the couples’ second child together, stunned in an embellished black gown. 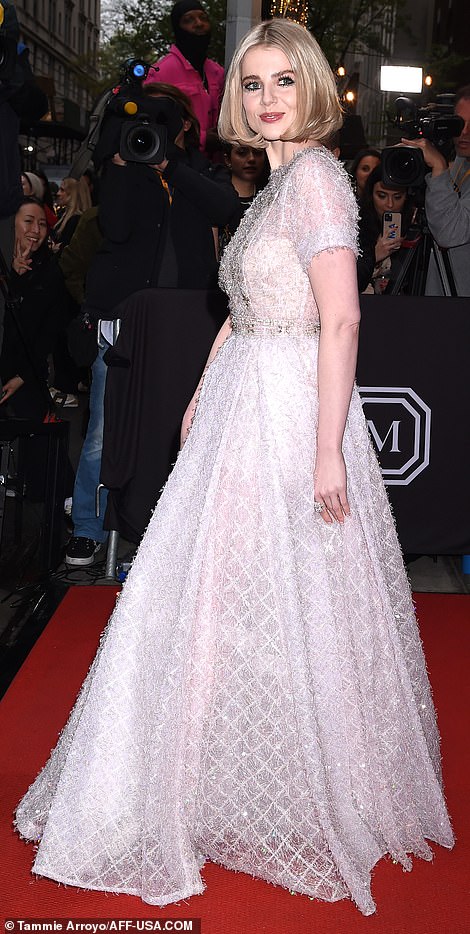 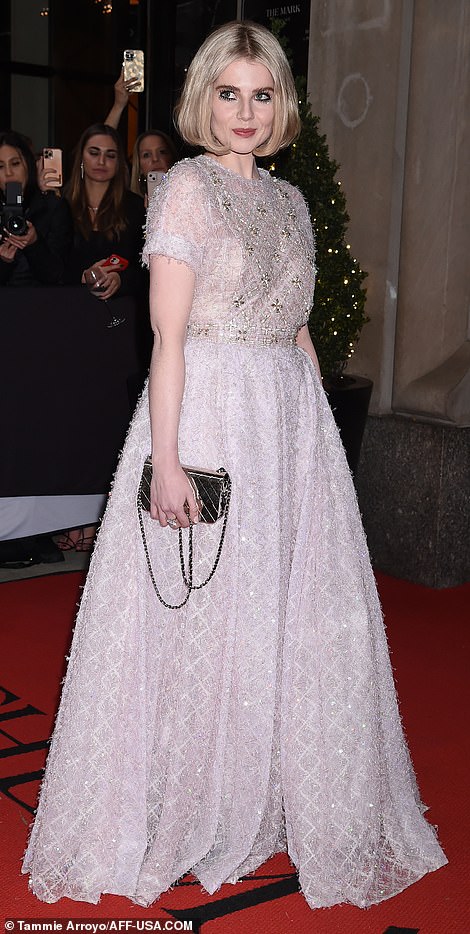 Sensational: Graceful: Lucy Boynton was a vision in a sheer white gown featuring short sleeves, while toting her essentials around in a sliver clutch 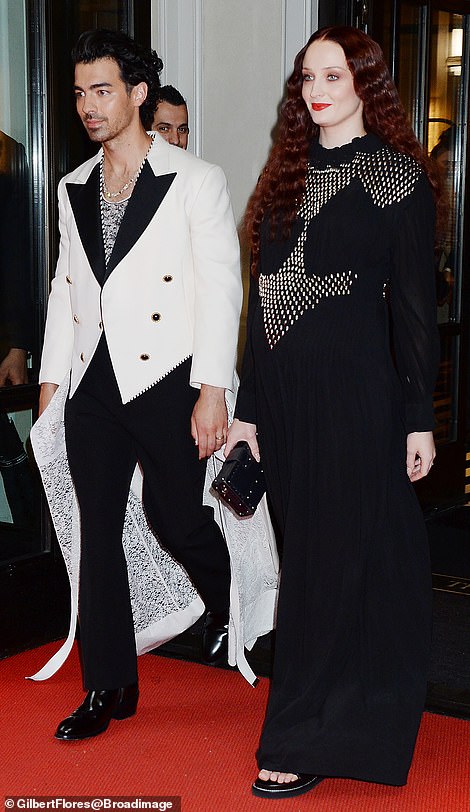 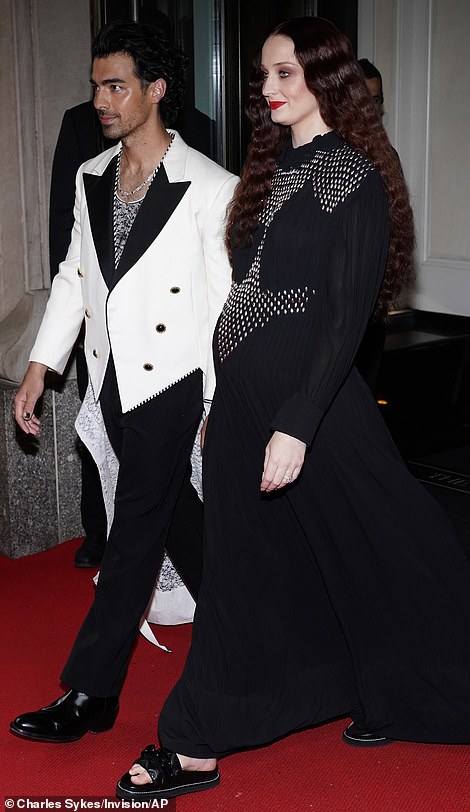 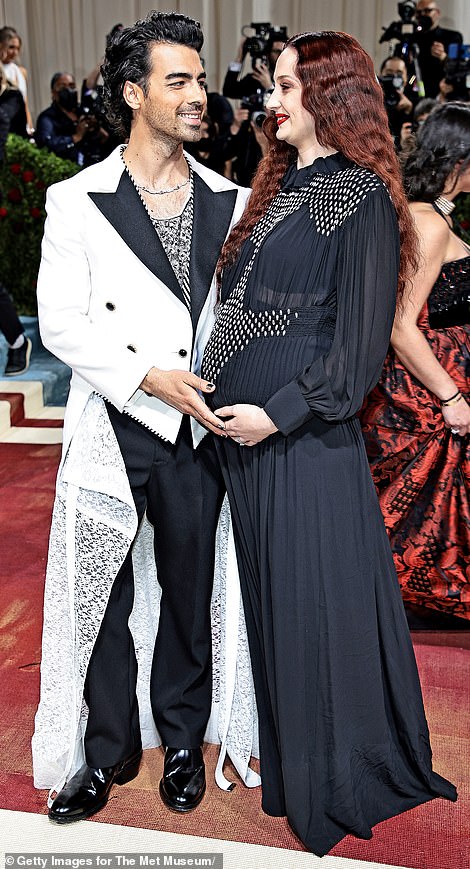 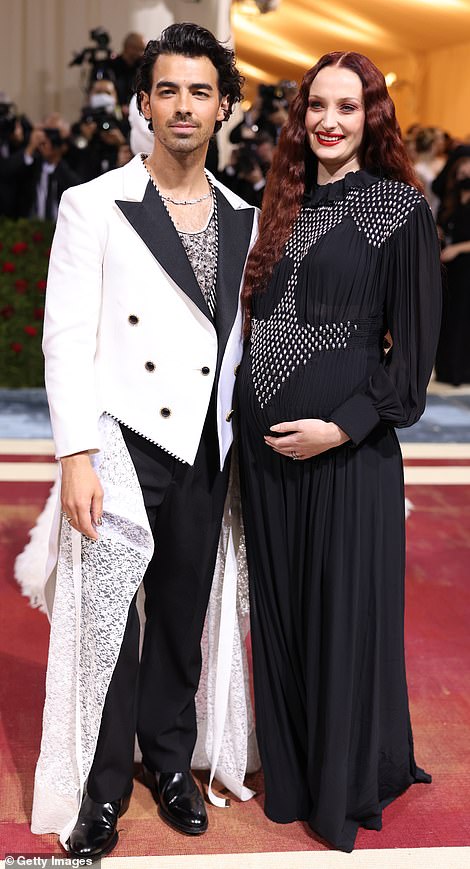 Soulmates: The couple stared adoringly into one another’s eyes while beaming from ear-to-ear

James Corden put on a suave display in a black suit and a cream bow-tie and his wife Julia Carey looked gorgeous in a velour forest gown, featuring a lace cutout which displayed her cleavage.

Brooklyn Beckham and his wife Nicola Peltz commanded attention with David and Victoria’s son looking trendy in a stone oversized suit while the billionaire heiress flashed her cleavage in a plunging pink gown.

The Metropolitan Museum of Art Costume Institute Benefit, also known as the Met Gala, is considered by many as the ‘Super Bowl of celebrity red carpets.’

Fashion’s biggest night is traditionally held the first Monday in May to raise money for the Costume Institute in New York City, with last year’s event moved to September due to the pandemic. 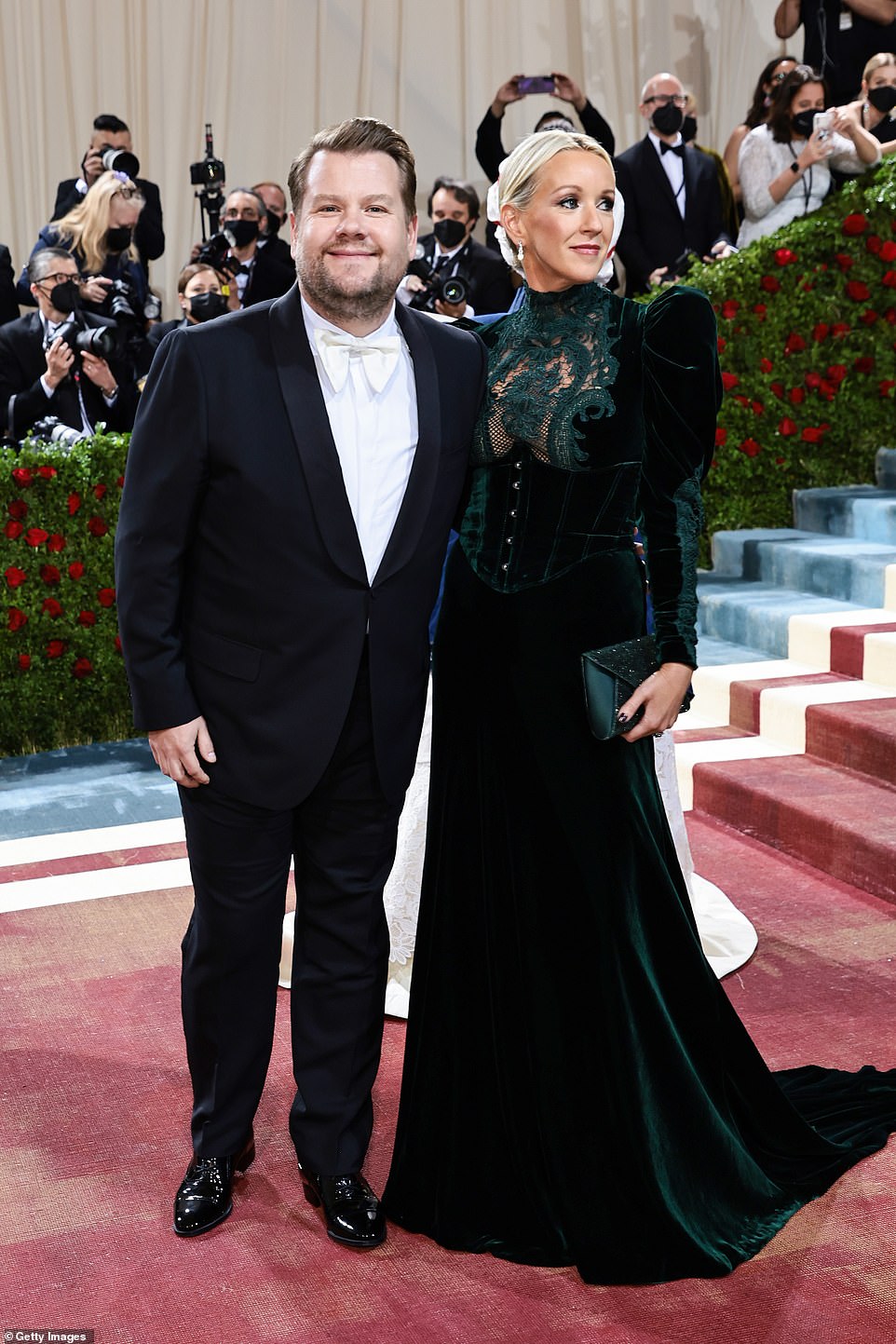 What a pair! James Corden put on a dapper display as he attended with his wife Julia Carey 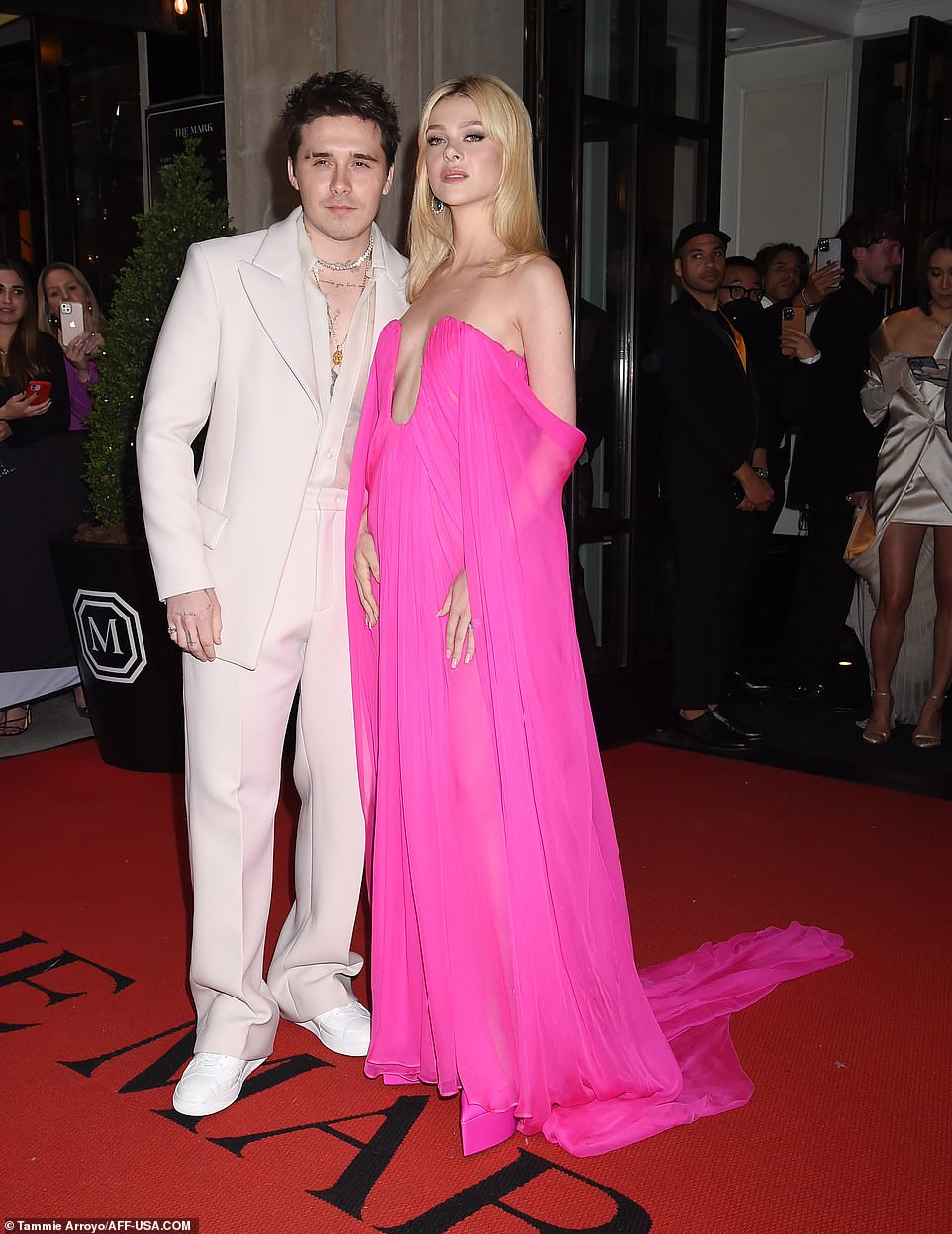 Loved up: Brooklyn Beckham and his wife Nicola Peltz commanded attention as they departed The Mark Hotel 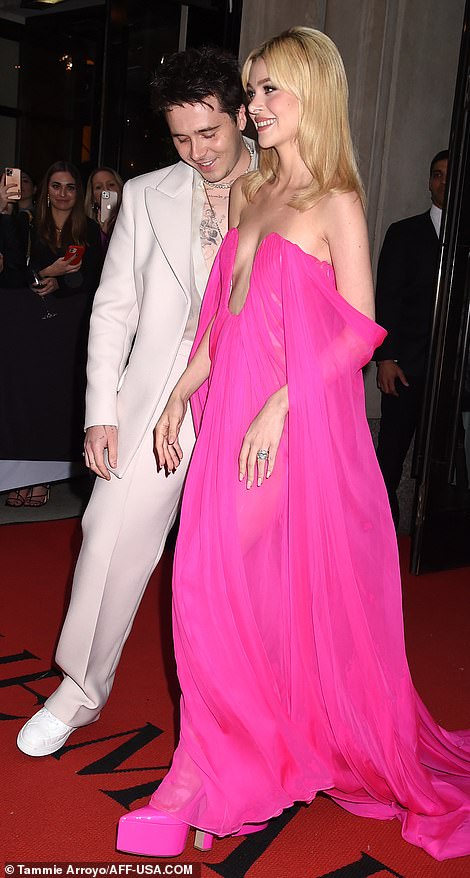 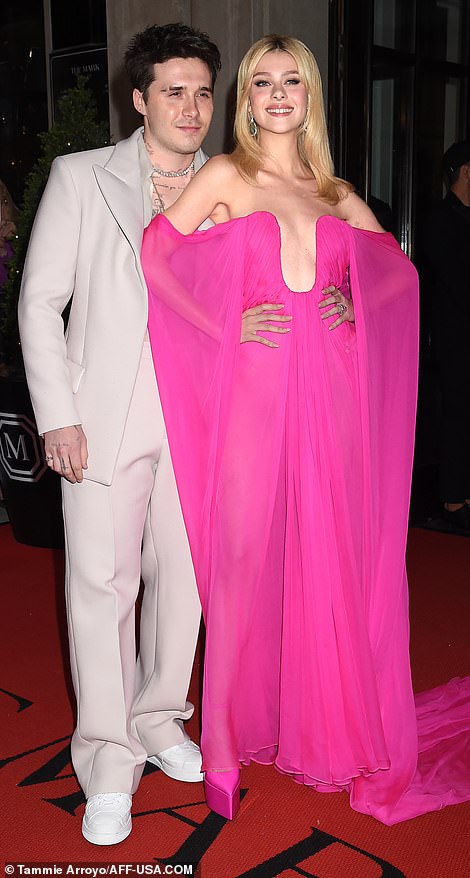 Hot stuff: The billionaire heiress flashed her cleavage in a plunging pink gown, while elevating her height with a pair of unmissable bubblegum heels

Commanding attention: Cara Delevingne ensured she wasn’t missed in a shiny red double-breasted jacket and coordinating trousers while accessorising with a cane

This year’s dress code is ‘gilded glamour’ to match the theme of ‘In America: An Anthology of Fashion,’ a continuation of last year’s ‘In America: A Lexicon of Fashion.’

This will be Miranda’s first time as a Met Gala co-chair (and guest) but he was originally intended to co-host the 2020 edition before the pandemic forced its cancellation.

Vogue editor-in-chief Anna Wintour is once again supervising the benefit as chairwoman, a position she’s held since 1995. Her fellow honorary co-chairs are designer Tom Ford and Instagram head Adam Mosseri.

As usual, the sartorial theme comes from the exhibit the gala launches: ‘In America: An Anthology of Fashion,’ which is the second of star curator Andrew Bolton’s two-part show exploring the roots of American style.

Bolton said eight directors will create what he called ‘cinematic vignettes’ in the period rooms of the American Wing of the museum.

Similar to the September event, there will be 400 guests this year, lower than the pre-pandemic highs of 500-600 attendees.

The other four are Ford, the celebrated fashion designer who’s also an acclaimed film director, Janicza Bravo (Zola), Julie Dash (Daughters Of The Dust) and Autumn de Wilde (who directed the Jane Austen adaptation Emma. and is also a photographer).

The first part of the exhibition will remain on display in the rooms of the Anna Wintour Costume Center, along with the second part, until September 5.

More than half the pieces in the opening exhibition will be rotated out and garments from designers not yet featured will go on display.

The Met Gala is a huge money-maker for the museum, and provides the Costume Institute with its main source of funding.