Merseyside Police say Everton DIDN’T report any ‘threats or incidents’ before telling their directors to stay at home for their safety, amid club claims of CEO Denise Barrett-Baxendale being put in a headlock at a recent game

Merseyside Police have revealed that they received no reports of ‘threats or incidents’ from Everton before the club told directors to stay away from their game against Southampton on Saturday.

The club’s board members, including chairman Bill Kenwright and non-executive director Graeme Sharp, stayed away from the game last weekend over safety fears – with Everton releasing a statement saying they were following the advice handed down by the authorities amid growing discontent from fans.

It came as reports claimed CEO Denise Barrett-Baxendale was put in a headlock at a recent home game with threats towards her and Kenwright via email also reported – as supporters continue to vent their fury about the club’s perilous position in the Premier League. 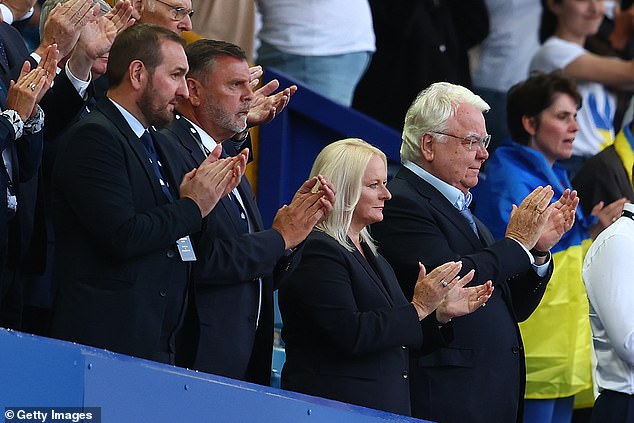 However, Merseyside Police have on Monday said that no reports were made to them regarding any incidents, though they are ‘liaising’ with the club.

Their statement read: ‘We can confirm that Merseyside Police is liaising with Everton Football Club following alleged threats towards Directors ahead of the Premier League fixture against Southampton on Saturday, 14 January.

‘No threats or incidents were reported to police prior to the game, but we are in communication with the club to establish if any offences have taken place, and to ensure that any future reports are received through existing channels. 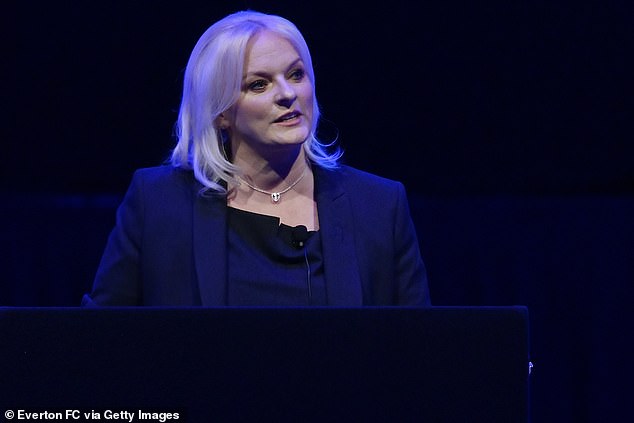 ‘Any threats reported to Merseyside Police would be assessed and investigated as a matter of course, and any appropriate safety measures implemented.

‘We are also aware of videos in circulation of fans approaching players’ cars as they made their way from Goodison after the match.

‘At this stage no offences have been reported.’

The statement risks causing further fracture between the club and supporters, with the latest defeat at the hands of fellow strugglers Southampton only ramping up the temperature. 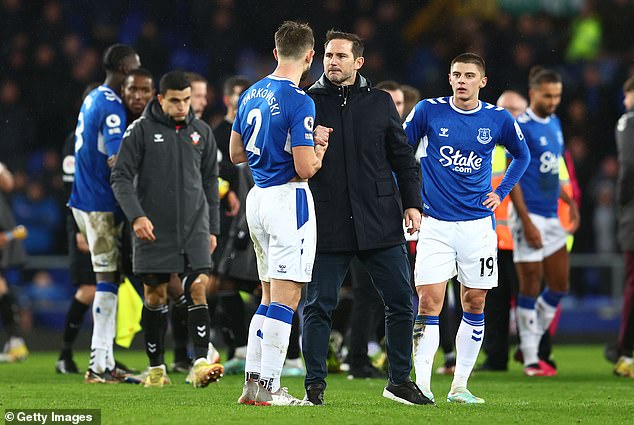 Defender Yerry Mina was confronted by a supporter after the game, while midfielder Anthony Gordon was chased down the street by another fan.

A sit in also occurred after the game with thousands remaining long after the final whistle.

NSNOW, a supporter group that purports to campaign for a ‘better Everton’ thanked those who remained behind on Saturday but directly aimed criticism at those ‘responsible for the decline of [the] club’.

‘Thank you for today’s immaculately conducted sit in,’ they wrote on social media. ‘We will continue to support the team, but those responsible for the decline of our club, those that stayed away, their position is totally untenable. Our protest will continue to grow until change occurs.’

Meanwhile, the phrase AllTogetherNow is being used by supporters as the slogan for their campaign for the removal of the board. 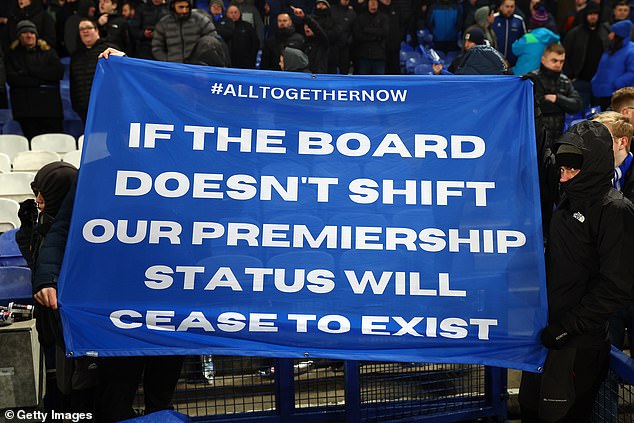 The atmosphere has become increasingly toxic at Goodison Park as supporters vent their fury at the club, who are battling relegation this season

Everton themselves had released a statement prior to Saturday’s game explaining why board members would not be in attendance, citing ‘malicious and unacceptably threatening correspondence’. Cameras at the game showed a number of empty seats in the directors box.

‘The board members received the instruction following malicious and unacceptably threatening correspondence received by the club and increasing incidents of anti-social behaviour – including targeted physical aggression – at recent home matches,’ the club wrote.

‘This is an unprecedented decision for Everton Football Club – never before has our entire board of directors been ordered not to attend a match on safety grounds. It is a profoundly sad day for Everton and Evertonians.’

Saturday’s defeat plunged the club further into crisis, with Frank Lampard’s side having only recorded one win in their last ten Premier League games.

The former Chelsea man is currently the bookies’ favourite to be the next top flight manager to leave his post, though owner Farhad Moshiri gave a controversial interview last week in which he said he would no longer be swayed by supporter opinion.