Global warming could cause tsunamis in the UK as melting ice sheets disturb the Earth’s crust, an expert has warned.

Currently, the ice sheets on Greenland are melting ‘rapidly’ and at a rate which is constantly accelerating.

According to Bill McGuire, a professor of earth sciences at University College London, this could have catastrophic consequences for Britain.

Currently, the ice sheets on Greenland are melting ‘rapidly’ and at a rate which is constantly accelerating. Pictured: melting icebergs and sea ice off the coast of Greenland

He has warned that the disappearing sheets make the weight on the Earth’s crust lighter, meaning it will start to ‘bounce back’ after being crushed under thousands of billions of tons of ice.

This could lead to earthquakes and ‘submarine’ landslides – which occur when sediment slides down into the deep ocean – in Greenland, which is roughly 1,500 miles away.

These underwater landsides could trigger tsunamis which have the potential to reach the west coast of the UK, the professor warned.

Speaking at the British Science Festival in Chelmsford, Essex, he said: ‘Greenland has been covered in ice for at least 100,000 years.

‘Those faults in the Earth’s crust will have been accumulating strain for a very long time. 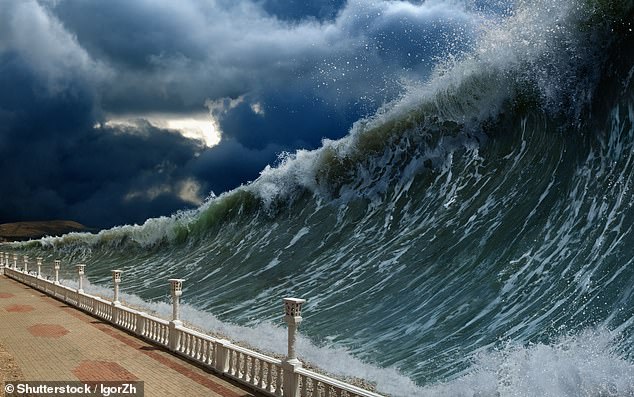 ‘And that could certainly impact on the UK. It’s not certain, but people who have worked on this say they have speculated about what they call a seismic response in the Greenland area within decades. Britain is in the line of fire.’

The Storegga landslide, which occurred around 8,000 years ago, sets the precedent for just how devastating these tsunamis can be, he added.

The landslide, which involved the collapse of 3,000 cubic km of sediment, occurred off the coast of Norway.

Estimates on the height of the wave vary between 80ft and 16ft depending on where it struck.

The wave annihilated an area known as Doggerland – a low-lying, marshy island covering an area the size of Wales and situated off the north-east coast of England.

The tsunami would also have affected what is now Scotland and the eastern coast, and caused widespread flooding and damage to the land.

Professor McGuire said the only way to prevent the potentially disastrous event would be to stop or slow down the melting of the Greenland ice sheets – but warned that we may ‘already be past the tipping point’.