She often posts underwear-clad positivity videos to social media, describing herself as an advocate of body neutrality.

And Melissa Suffield laughed off her trolls in a new lingerie Instagram video on Friday, insisting she ‘doesn’t care’ what people think of her.

The 29-year-old actress, who formerly played Lucy Beale in EastEnders, hit back at messages of hate she has been receiving about her posts through the video.

Making a statement: Mellissa Suffield, 29, stripped down to her underwear for an Instagram post on Friday as she hit back at her trolls

The video showed her transition from being in a black cami top and trousers, before covering the camera and reappearing in a leopard print lingerie set.

Over the video, she added writing of direct messages that people have previously sent her, including ‘put it away’ and ‘your body is disgusting’.

But the actress showed she wasn’t fazed as she laughed throughout the video, writing: ‘I don’t care what you think of me, and that gives me power,’ before waving goodbye to the camera. 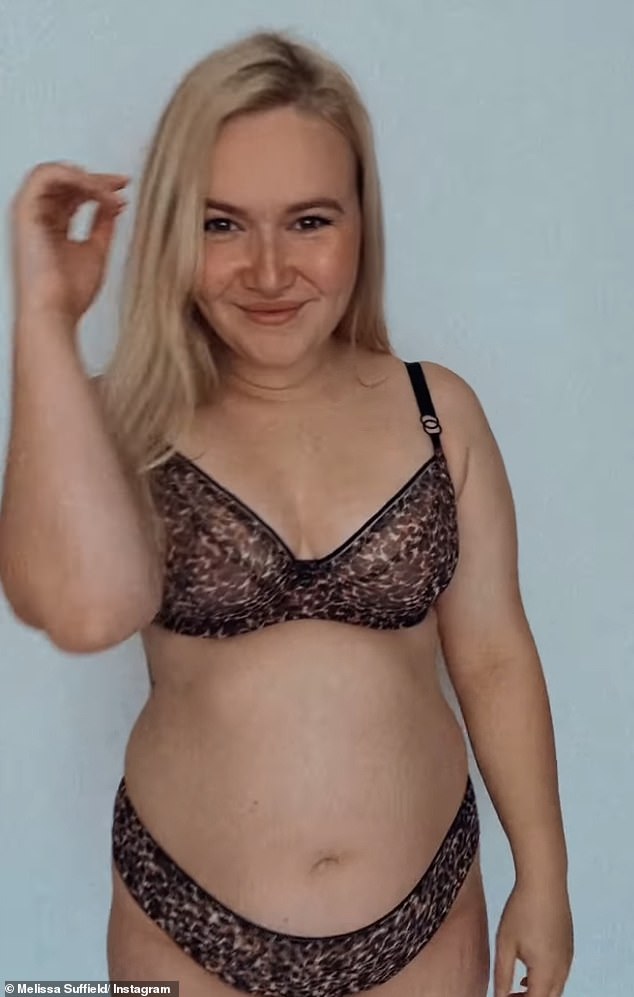 Inspiring: The actress posted the body positive video to tell her fans that she ‘doesn’t care’ about the messages of hate they send 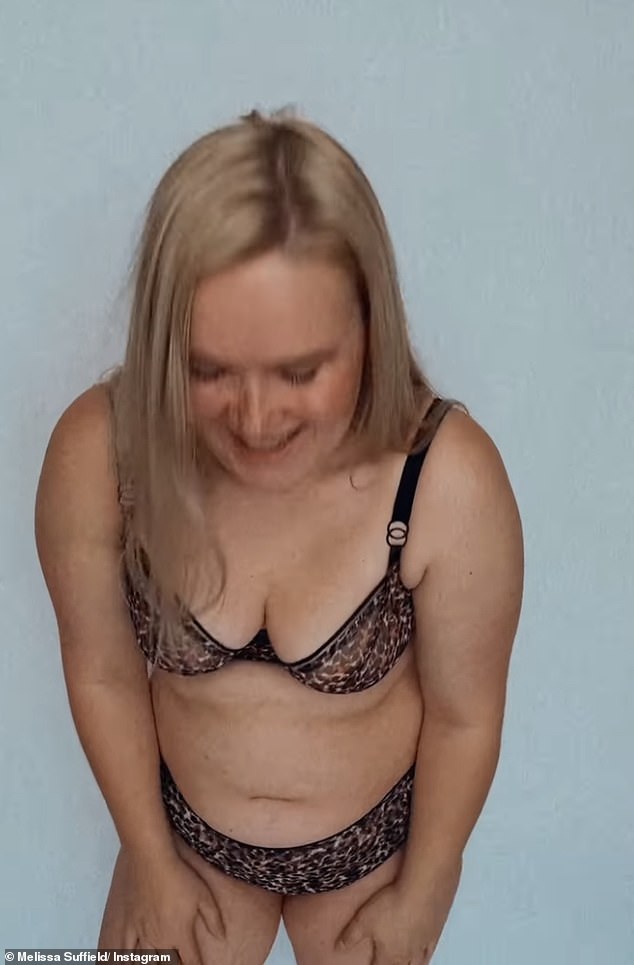 Laughing it off: She seemed to be unfazed by the trolls, as she laughed throughout the video 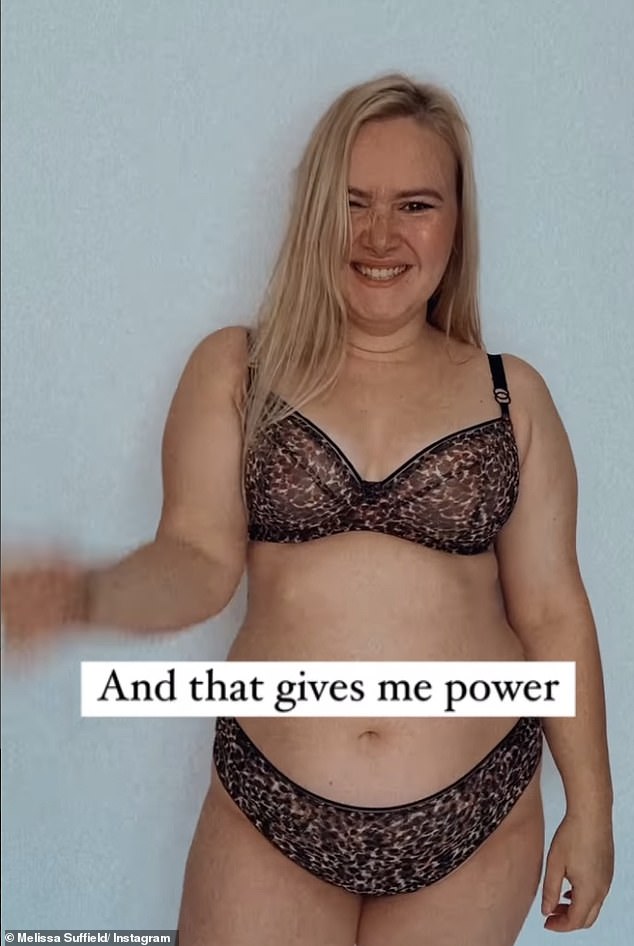 Powerful: She insisted that she had ‘power’ due to not caring about the messages

In the lengthy caption, she explained that she ‘constantly’ gets messages like these, telling trolls to ‘scuttle off back to the vitriolic comment section’.

She wrote: ‘You aren’t always going to be everyone’s cup of tea. People will do things differently than you, and that’s ok. We’re all entitled to an opinion- but don’t mistake that for openly airing them without consequence.

‘It’s great that we all have a platform now, but scuttle off back to the vitriolic comment section you came from if you feel the need to say your piece.’ 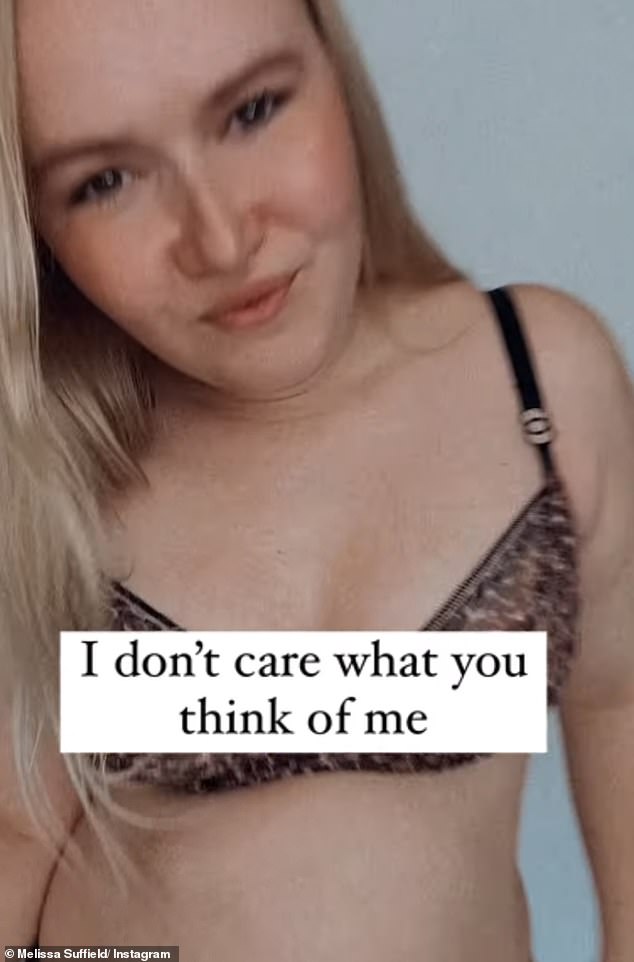 Statement: She made her opinion clear through the bold video 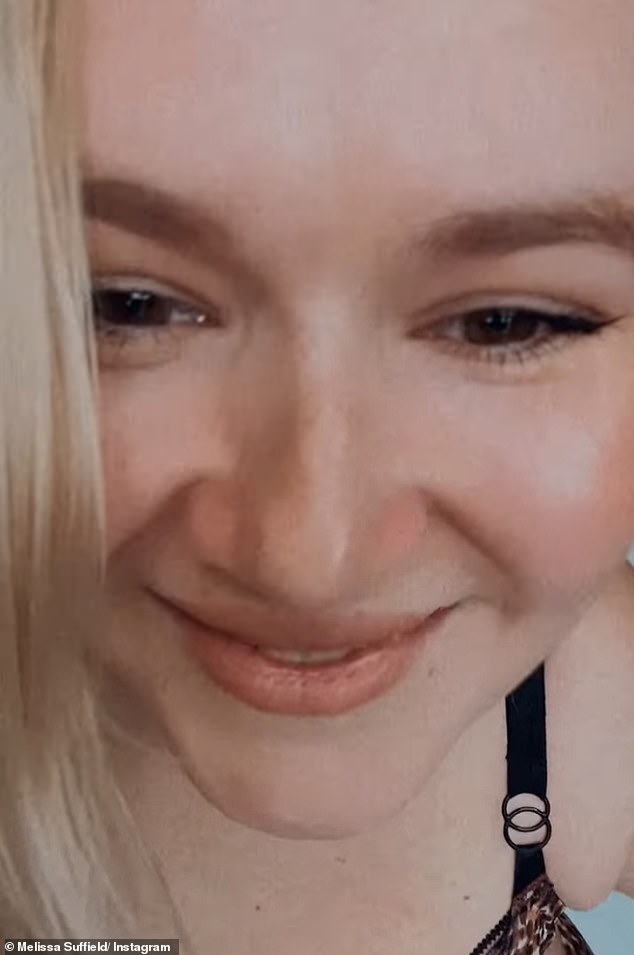 Up close: Melissa leaned in close to the camera for the transition video, flashing a large smile 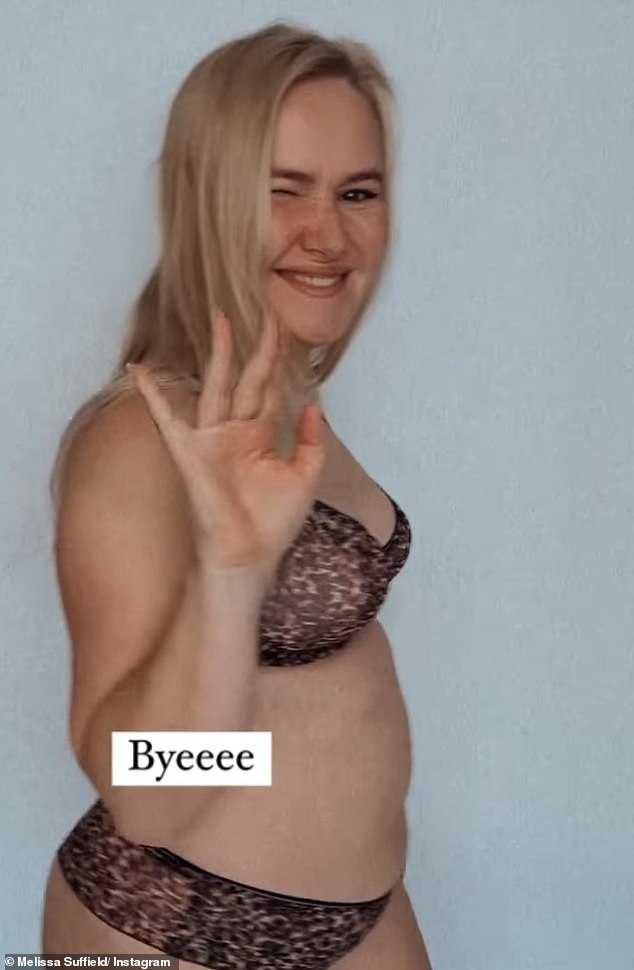 Off: She waved to the camera before walking off, captioning ‘Byeeee’ 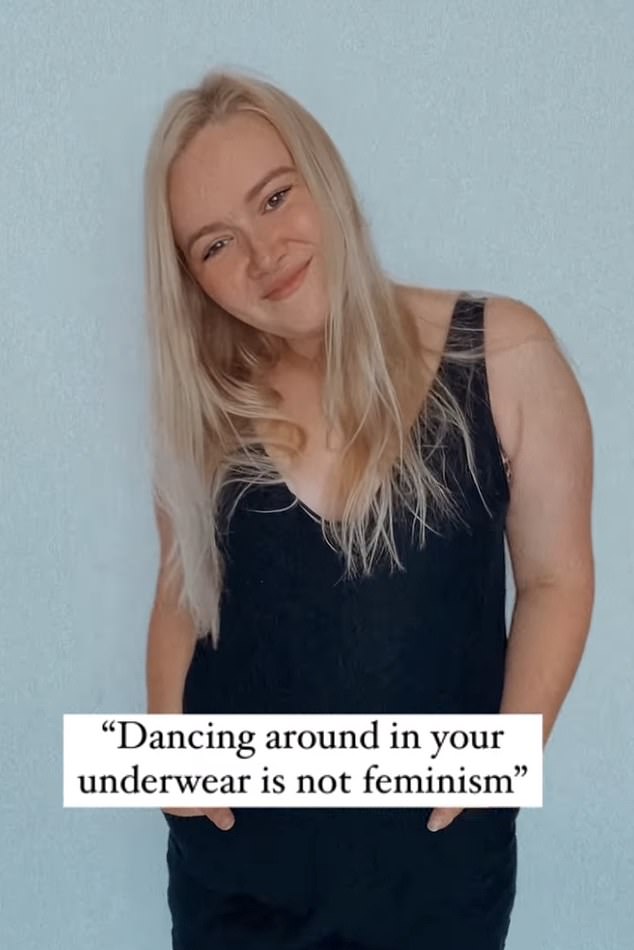 Transition: The video showed her in a black ensemble to begin with, before transitioning to the lingerie look

Turning the caption to a positive, she offered some words of wisdom to fans as she assured them that they have ‘the power’.

‘Whatever you do, don’t let ANYONE make you feel small. You have all the power, don’t let anyone else have any of it for even a second. You’re a bad b***h. Keep shining ✨,’ she concluded.

The bold post comes after she recently shared a message about her bloating due to polycystic ovary syndrome (PCOS), insisting it doesn’t stop you looking beautiful.

Posing in a number of outfits, she wrote: ‘I made sure to film this on a VERY bloated day for me (these roll around occasionally due to PCOS if I’ve not been eating well). 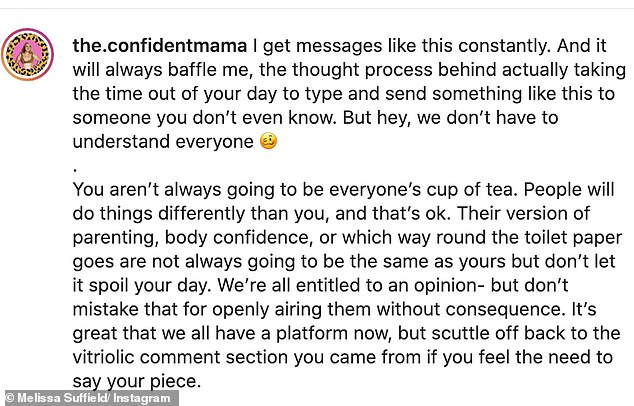 Keep shining: In the lengthy caption, she explained that she ‘constantly’ gets messages like these, telling trolls to ‘scuttle off back to the vitriolic comment section’ 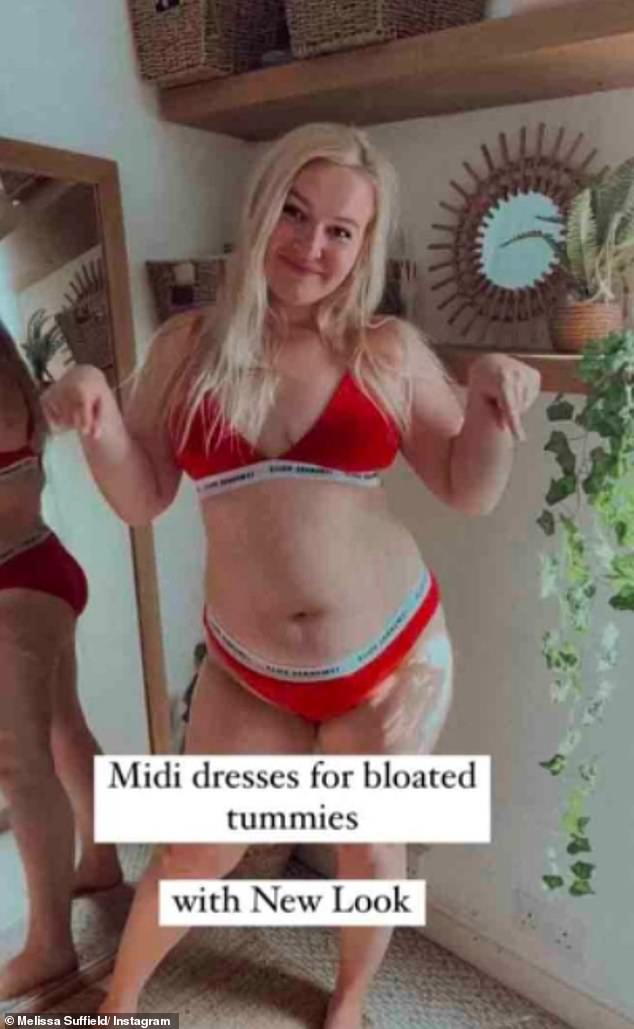 Looking good: Melissa once again flaunted her curves in a red lingerie set as she recently shared an empowering video on Instagram

‘But I really wanted to show you that A) bloating is N O R M A L and B) you can still look fierce with a bloat!”

Melissa, who had a baby boy in 2020, went on: ‘It’s tough having a tummy that bloats easily – you start and end the day completely different sizes! So I’ve rounded up some dresses from New Look that are comfy from morning until night, no matter how the day goes.

‘I didn’t want everything to be a swing dress, so I’ve been sure to choose a range of styles, including the dreaded bodycon.’

Confident: The former EastEnders actress showed herself trying on a number of stunning dresses, while sharing a long message about her bloating due to polycystic ovary syndrome (PCOS), insisting it doesn’t stop you looking beautiful

Since becoming a mum, Melissa has been sharing a number of heartfelt posts about her experiences, as well as adjusting to her changed physique.

Last year, she took to Instagram to share a candid snap of her post-pregnancy belly in a bid to promote body positivity among her followers.

The actress proudly posed with her hands on her rear, revealing her naked body and her rose tattoo.

Melissa gave birth to her first child River just over a year ago, her first with her director husband Robert Brendan. 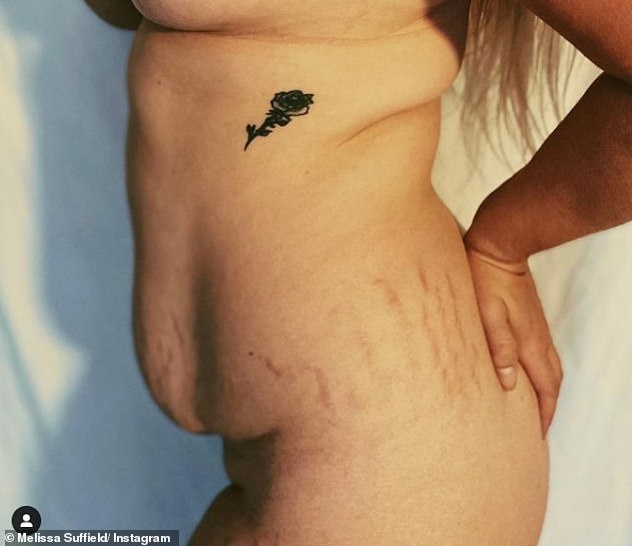 Inspirational: Melissa took to Instagram to share a candid snap of her post-pregnancy belly in a bid to promote body positivity among her followers 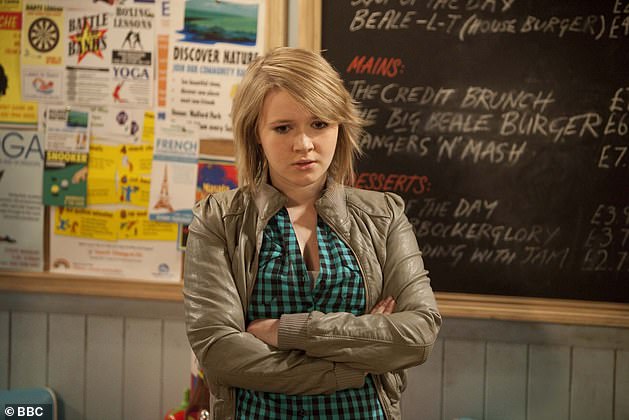 Throwback: The actress is well known for her portrayal as Lucy Beale on EastEnders from 2004 to 2010 (pictured) 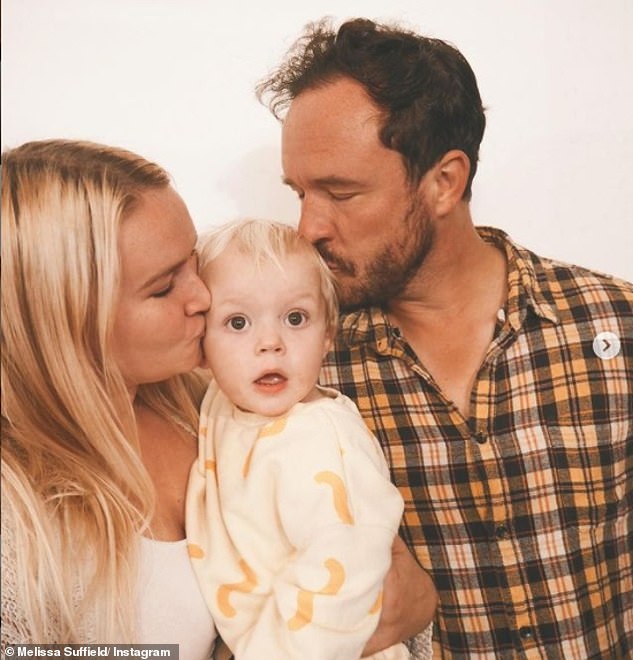 Sweet: The mother-of-one is married to cruise director Robert Brendan and they welcomed a baby boy last March, called River